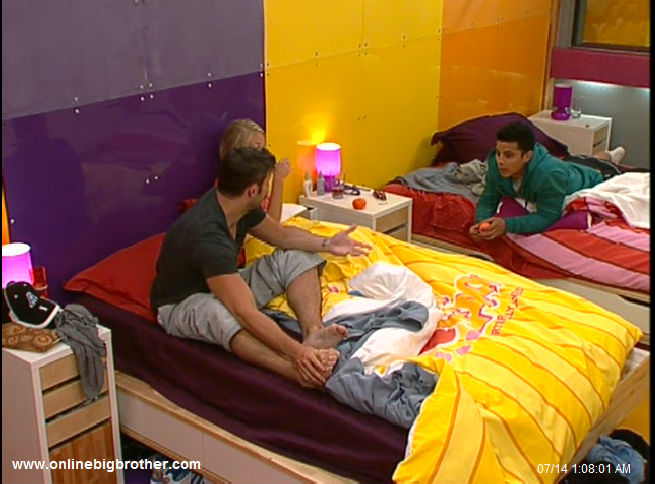 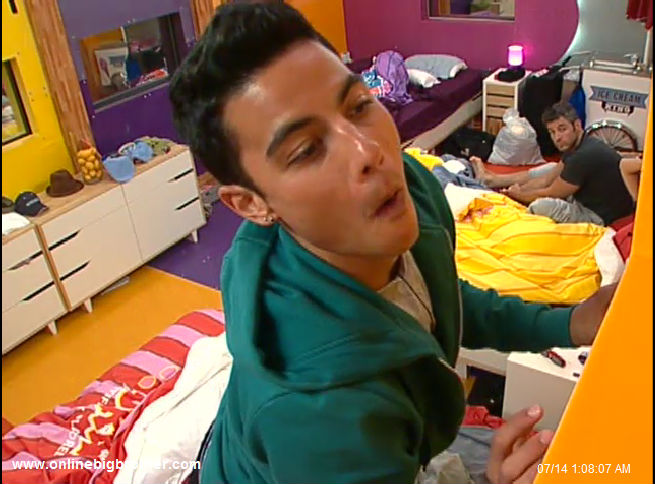 1:10am Jeff, Jordan and Dominic are in the candy bedroom talking. Dominic tells Jeff and Jordan that he never said he would put Jeff and Jordan up if he won HoH. Dominic says that it would be stupid to say that beforehand. Dominic says that there were psychos in the house like Keith who he didn’t want to be associated with. Dominic says that Porsche was just stupid but Keith was a psycho. Jeff says that they need to have some mutual trust before the HoH competition. Jeff says that if they made a deal ..then they could make it happen that Dominic would stay over Adam in a vote. Dominic doesn’t say much. Dominic says that he didn’t want to split a couple up ..like take Brendon out and have Rachel go to jury and have Rachel be mad at him in the jury. Dominic asks Jeff and Jordan who they thought he had a better chance with, Daniele or Cassi? Jordan says Daniele. Jeff asks Oh, to bang? I thought you meant to align with.?! Jeff says although you probably want to align with who you have a better chance to bang. Dominic laughs. Dominic says that question could have more than one meaning. Dominic leaves the room.
FLASHBACK – Don’t miss all the drama!
Superpass – 3 Day FREE Trial

After Dominic leaves, Jeff and Jordan start whispering. They talk about what would happen if they got rid of Dominic. Jordan thinks that Cassi might then go to Daniele. Jeff tells Jordan that Daniele doesn’t like Cassi. Jeff says that Daniele had the best setup in the house. Jeff talks about how Dominic was feeling them out. 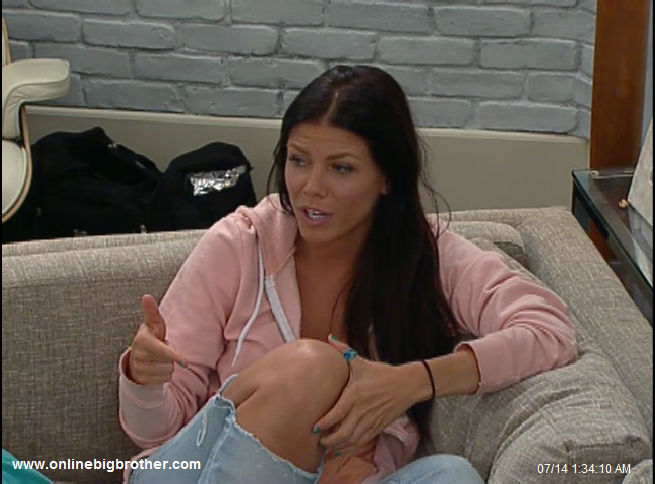 1:30am Up in the HOH room, Rachel, Brendon and Dani are talking. They discuss what the order should be for the HOH competition tomorrow. They decide that it is best that Jordan, Brendon, and Jeff will go last. They talk about how they are concerned that Jeff may mess things up for them. Dani tells Brendon that he and Jeff are coming off a little power drunk and that they don’t want the newbies to win HOH and then nominate them. Dani says and to have them say Oh, you thought you had all the power, well guess what? We’re HOH now! Dani asks Jeff if he’s talked to Shelly. Jeff says no. Dani says tells them that Shelly has been acting sketchy and has made some weird comments. Rachel says that Shelly has been nervous and avoiding her. Rachel and Dani tell Jeff that he needs to cheer loudly and be excited if Dominic and Adam win HOH tomorrow to make everyone wonder what’s going on between them. 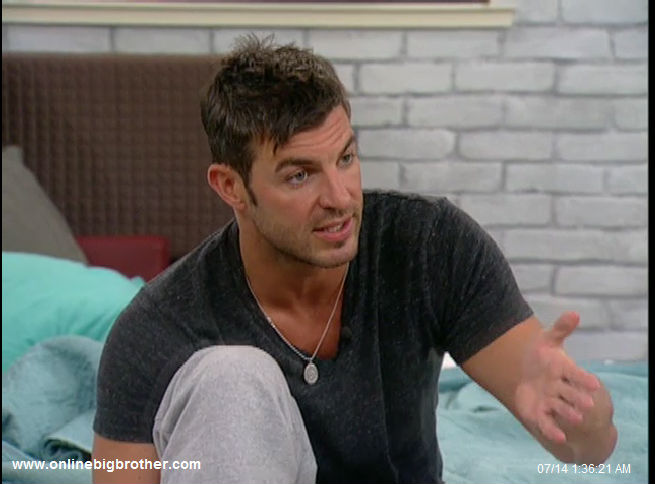 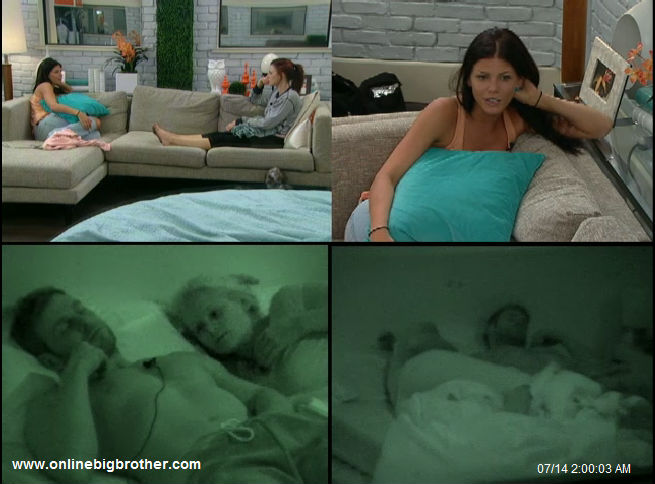 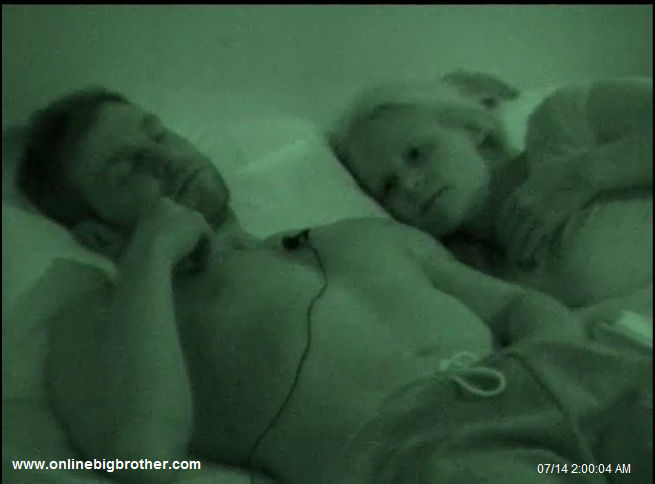 Rachel and Dani are still talking up in the HOH room. Rachel tells Dani that if Cassi is gone, Dani would be able to get Dominic to work with her as a partner. Dani says that she doesn’t know about that, but that she thinks she could definitely sway him. Dani tells Rachel that Dominic thinks the couples being in the house can’t benefit him. Dani says that she should talk to Dominic and tell him how they could be a benefit to him if they are still in the game. Rachel says to Dani that her and Brendon would possibly take Dani to the final two. Rachel says that she doesn’t care if Brendon wins or if she wins, as long as one of them wins. Dani tells Rachel that she wants to keep Dominic in the game.
TRY the out the Live Feeds for FREE SUPERPASS – 3 DAY Trial! 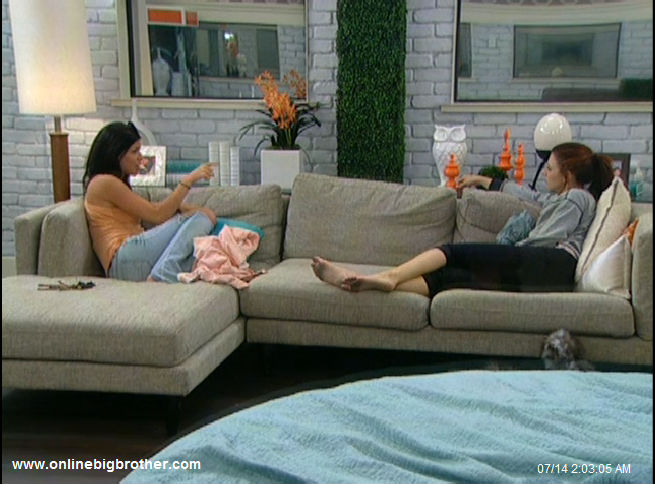 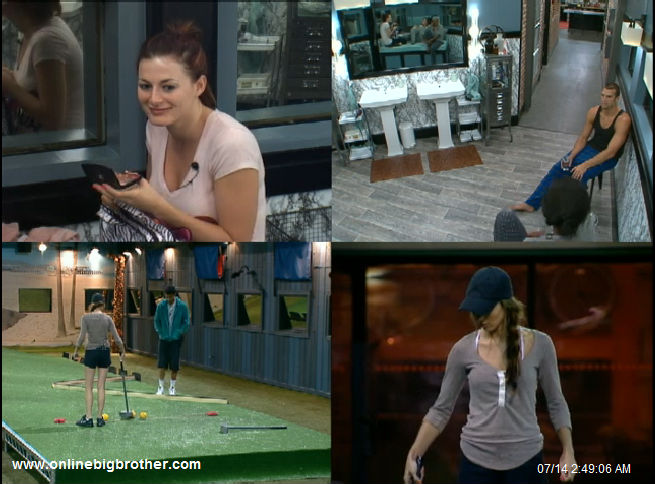 2:30am In the backyard, Dominic and Cassi are practicing the mini golf game. They are doing their best to aim at the colours. Dominic says that he is very colorblind. Dominic tells Cassi that he has a good feeling, and that he thinks Keith is staying. Cassi and Dominic talk about making a deal together, with Dani on board, with other side if the other side wins HoH this week. Dani comes out and is talking to Cassi and Dominic. Dani tells Cassi and Dominic about how they clean on Thursdays. Dominic tries to figure out who to share beds with after have-nots end. Dominic asks Cassi and Dani if they would share a bed with him. Both of them tell Dominic no! Lawon comes into the bathroom and says yes to sharing a bed with Dominic. Dominic says that the perfect bed mate would be Adam. Dominic talks and jokes about how him and Adam would spoon. 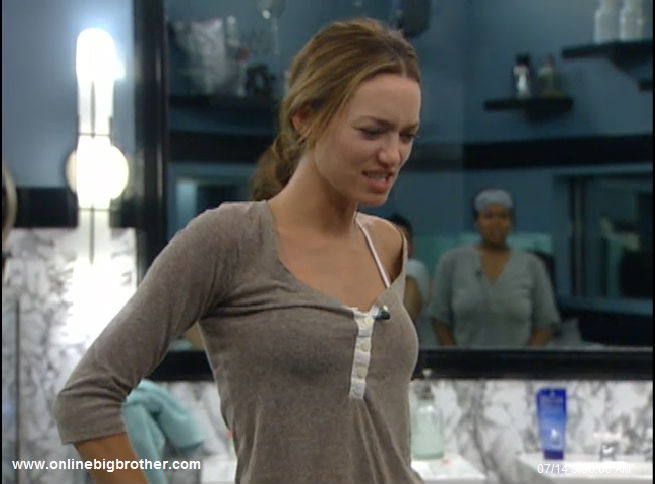 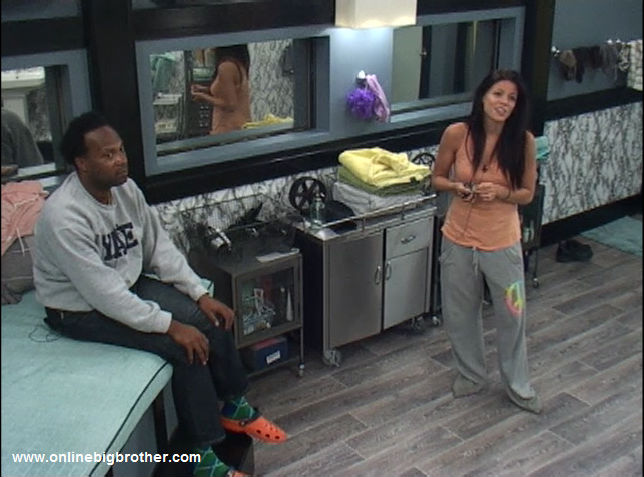 4:50am The conversation changes to talking about having to clean the house in the morning. Dominic asks Dani which part of the house is the easiest to clean? They both say that they don’t want to have the clean the bathroom. Dani says she just can’t, it makes her nauseous. Dominic says goodnight and leaves. Lawon tells Dani that he can’t wait until tomorrow, he’s so excited. Dani tells Lawon that the live shows are fun and it gives them new stuff to talk about in the house. LaWon says that he wants Shelly to win HOH because she has been down and wants to see her child. Lawon and Dani head to bed. All the houseguests are now asleep..

6:30am – 7am Shelly wakes up for the day, goes to the washroom, goes out into the backyard for a smoke and then starts practicing playing the mini golf game some more….

Well looks like Dom will be safe no matter who wins HOH, I’m cool with that.

Question for Simon and Dawg.
When do you guys sleep? lol

Simon… You guys are awesome. This is my third year on the site and ya’ll never fail to impress me with your stamina. You both just keep on trucking even when people make rude comments about the site and react gracefully each and every time. I don’t even peek at any of the other BB sites… Thanks for all u do and put up with.

Yessss team doni = dani and dom, I like cassi though but dom is my favorite

Dom is a dick and is cocky hope he goes next, then brendon

I agree Jackie. Something I don’t like about that guy.

I see Keith heading home tonight unless something changes today, which I doubt. Though I can see at least Shelly and Cassi voting to keep Keith. I honestly wish Keith would end up staying, it would give a blow to the Vets alliance and cause some more tension in the house.

Dom has the best chance in the game over all the newbs at this point, he has the house liking him enough to keep him and he has a pretty good social game going to boot, other than with JJ who can tell he was game playing. Shelly also has a good stand in the house, but that could change after tonight’s votes. BBAD tonight should be some good watching.

Rachel says if dom or adam sins HOH to cheer them to create distrust with the newbs, dumbassitness at it’s best , both of them are going to put up brenchel if they win HAHA, can’t wait to see that

the blow up that will happen when a repeat goes up will be epic! can’t wait

It was funny watching BBAD last night with Brendon saying “I dont want to make the same mistakes as last time.” In which, they have not the same thing they did last year…win comps, get in peoples faces that they are the best, and will go down. The best part of all is Jordan and Jeff are just letting Brenchel do their thing and waiting for the newbs to put them up.

Dani might be best sticking with JJ than Brenchel IMO