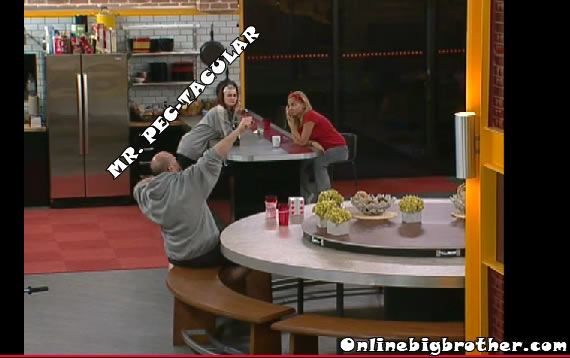 10:22pm Kitchen Adam, Rachel, Porsche They’re asking Adam if he would every open pandora’s box. Adam says most definitely, he explains that most of the time Pandora’s box is a good think. Adam: “Poor brit had locked in a room with Jessie” Brendon walks in says Poor Brit more like Poor Jessie”. Adam: “Ahh you didn’t know brit like I new brit”. He then goes in length about Big Brother 12 when Brit opened the box and had to spend time locked in a room with Jessie Adam yells “MR. PEC-TACULAR”. Porsche and Rachel ask him a bunch of questions about it. They start talking about America’s player and the El-Salvatore and are wondering if you are given the choice. Adam tells them in some circumstances you probably do have a choice like last year with Ragan he probably had a choice. Dani adds that if it’s early in casting and you turn down a special roll you probably won’t get casted. Rachel: “Would you say yes if they asked you to play America’s evil” Dani laughs at her asks her what does America’s evil even mean . Rachel: “Well like your dad” Rachel: “What the hell.. he was just playing himself for fun”.

12:28pm bathroom, Dani and Shelly Dani has started telling everyone she is the second heaviest girl in the Big Brother house. Shelly says it’s because of all her muscle. 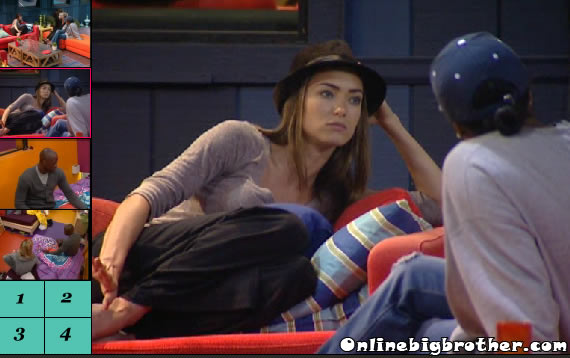 10:35pm Backyard couch Jordan, Kalia and Cassi Cassi is rehashing her arguments with Porsche that started last night. She says that she was playing pool with the guys and Prosche and Rachel started acting like “bratty Girls” They were making immature comments like “ohh good scratch” “ahh cassi so close” Cassi was pissed of and told them if they wanted to play they should wait their turn. She then brings up Porsche running to Shelly and thats when cassi had enough… feeds cut to fortune room

10:40pm Porsche and Keith fortune room Keith is telling her he doesn’t have the votes and she’s going to be good. Porsche asks him where his votes are coming from. Keith thinks he has Lawon because Lawon gave him his word, he thinks he has Kalia and maybe Shelly. POR tells him he has Cassi and Doms vote. Keith says absolutely not they don’t know that I know they have a secret agreement with Rachel. POrsche: “But you said to me already that Dom has a secret deal with BRendon and rachel”. Keith starts to stutter says no then yes then maybe. Porsche tells him his lies are getting to big for his little mind. She gets up ans starts leaving. Keith begs her to talk to him but she brushes him off says “I’ll talk to you at the wrap party I don’t want to be associated with a bus driver that runs over his own partner”. 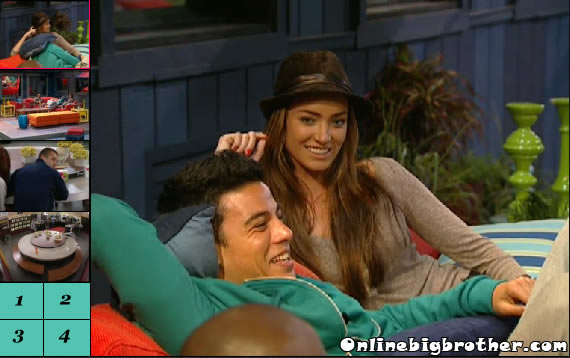 10:55pm Backyard couch Adam, Cassi, Keith, Dom, Lawon practicing the comp, Jordan There joking around about what they will do if they win HOH. Lawon tells them if he wins HOH him and Adam are going to make up the first offical HOH dance.

Dom what would happen if Porsche wins HOH.. He laughs says “nah she’s not going to win HOH.” Cassi tells him to be quiet they can totally hear him. They all laugh. Dom: “we whispers so loud”

Lawon is joking about what he would make the others do if he wins HOH, he’s going to make Keith be hi personnel trainer. Dom jokes that he’ll make Cassi fluff his pillows, DOM: “Ohh cassi the prince wants his pillows”

Dom tells them they will have to earn their rights to be in HOH, if people don’t work out they’re not allowed up there.

11:30pm Fortune Room Adam and Porsche Porsche is working on getting Adam’s vote. She tells him that she knows that when the game started she wasn’t very social to people and that she thinks that it screwed her. She starts telling him that Keith is a stronger player than her and he’s playing a mental and physical game right now. Adam: “umm yeah he’s definitely playing a mental game” (lol biam)

Adam tells her that he’s seeing a big rift coming in the house, The vote on thursday will reveal where the votes are and all hell is breaking loose. He doesn’t think that everyone will be having fun together like they are now. If the repeats win HOH they are going to put a newb pair up. If a repeat pair gets put up they are going to start a HUGE ruckus much bigger than you and Kieth did.

Porsche says she didn’t know how to play at first she’s only 23. She thinks if you give her a couple weeks she’ll figure out who she wants to be with and watch what other people are like.
Adam I do want you to stay because I can work with you but to play devil advocate if Keith is around that’s a big target out there. Porsche tell him she is not campaigning to anyone but she really thinks she open to working with people if she gets to stay.

Adam says I really have not made my decision and if you hear I told him I gave him my vote it’s only because I said that to shut him up. Adam says both POR and Keith staying will benefit him so he needs to think about it.

He tells her whatever he votes it’ll be based on what works best for his game. Tell her Keith came up to him today acting paranoid and all messed up saying Dom doesn’t have his back and it’s behavior like that which is hurting him because nobody want to be around paranoid people. She expect everyone in the house to vote for whoever will further their game.. Adam says thats what he’ll do. 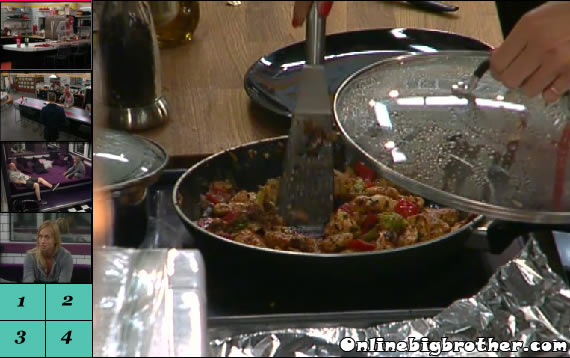 11:55pm Have nots get to eat Kalia, Cassi, Shelly, Lawon get to eat at midnight. Kalia has been dancing around all day in anticipation of being able to eat whatever she wants. 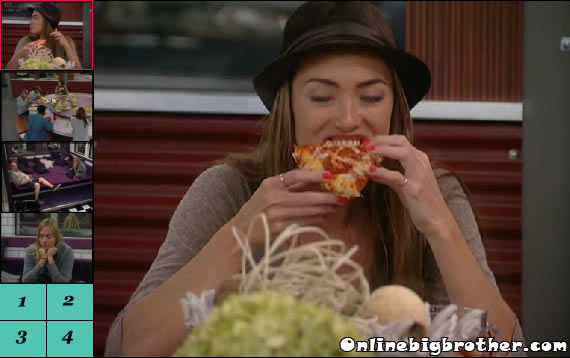 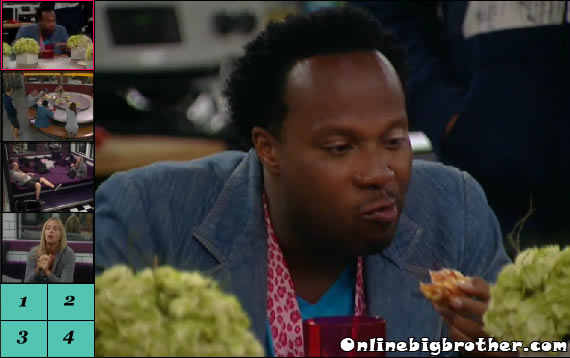 Best part of being locked in a room is having to eat everything you can to survive. Oops, door’s not locked, Allison Grodner just panicked and nervous-binged.

I’m getting really confused with the newbies. Everyone seems so wishy washy this year. The vets got the game on lock hands down, I think. If Jordan or Jeff or Brendon win HOH I hope they put up Dom and Cassi… and hopefully Dom goes home.

sorry, just realized they have to put up a couple. i hope jordan puts up dom and his partner i mean.