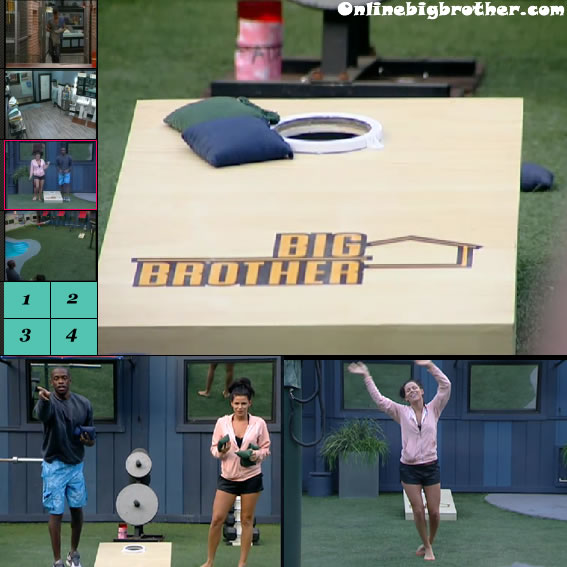 7:30pm backyard Nothing much going on Dani and Keith playing bean bag toss, Porsche is cruising around in her purple Bikini.

7:34pm Kitchen Cassi and Brendon talking in the kitchen as they clean the dishes. Brendon is telling her that it’s not a good idea to eat healthy in the house because you never know when you’re on slop. Cassi says she’s craving Humus and pita but not Pizza. Brendon says he eats very healthy when he’s outside the house he never eats Pizza…. 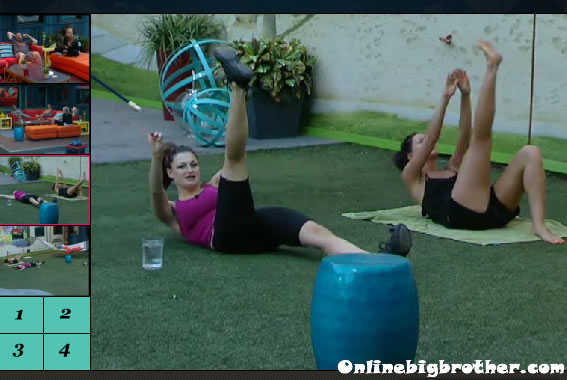 Would you rather be always orange with a fake n bake spray or would you rather have really big fake boobs forever.
Dani: “How big are they.. like Rachel Reilly big?”
Dom: “Big.. like gross big”
Dani: “Probably B”
Dom: “really…..”

Dani brings up a story where Adam was telling them a story when he got caught soliciting a ticket (Dunno?) and he joked “I guess it was Like I was a prostitute” Dani then mentions as soon as Rachel heard prostitute she turned around and said “Is someone talking about me”. Dani then starts teasing the way Rachel uses the Elliptical trainer..

Dani would you rather only be able to do puppy dog style or something else.
Rachel starts showing them all the different sex positions, Puppy dog style, Doggy Style. Dani asks her what kitty cat style is Rachel doesn’t know. Dani show them it’s doggy style with your hands on your head.

Dom would you rather a guy that’s amazing in bed but is a horrible communicator or a guy who is average in bed or he’s a great communicator . Both Dani and rachel would rather ‘A’ but dom eventually convinces them to pick ‘B’ 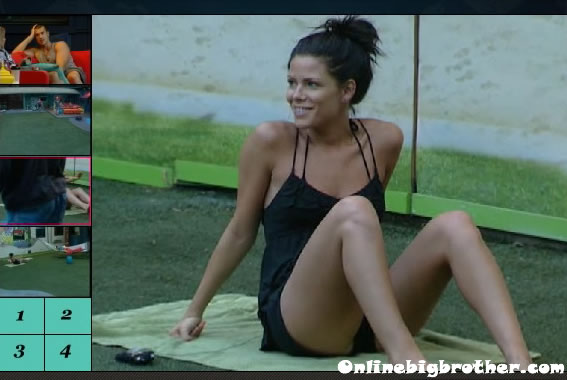 8:12pm Dani is telling them that her brother hasn’t signed the release yet.. Dom and rachel think it’s really wired.. Dani says it’s really bothering her… Keith has joined them. 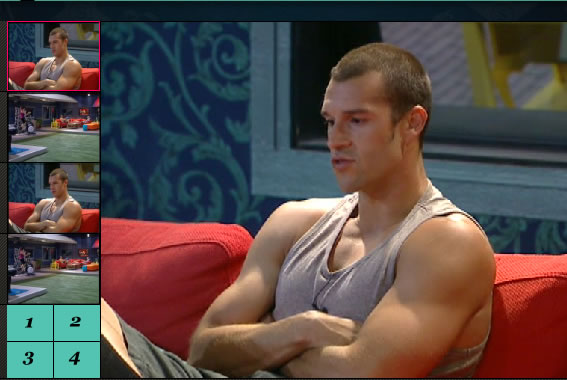 8:40pm backyard Brendon, Jordan, and rachel on the elliptical Brendon is saying that he cares more about his and rachel relationship than winning the 500K. Rachel says she fell in love with Brendon last year 100% and knows they will be together forever.
She says it was stressful when they got out of BB11 and they opened themselves up to people and that is what caused their scandal. Brendon said he was insecure and he didn’t know about their relationship. He blames the internets and all the site that said Rachel was out doing this and that.. it worried him. Jordan says she never looks herself up on line doesn’t think anyone on this show should.

I haven’t seen the feeds of BB8, but does anyone think that Dani comes across as a C-U-Next-Tuesday? I’m just wondering, based on things I’ve seen on this site. How about the other houseguests?

I know everyone hates Rachel but she seems more to be a really annoying type, kind of shallow (by that I mean not much going on upstairs), so I don’t really take anything she does seriously, but the mean-girl types, I think, are a lot worse. Maybe I’m wrong about it all, idk. I guess I should watch the feeds (or rely on someone’s input) to let me know better. Any help? What do you think about the houseguests’ personalities?

Yes Dani is like that this year. During Season 8 she was young and in a shomance with Nick after that she just stuck close to her dad, Whined 24/7 and won a shit load of comps. Rachel right now seems more annoying and a bit awkward whereas last year I think she was more nasty. I’m thinking this will change. Brendon is exactly like last year possibly worse. Jordan is boring me to tears. Jeff has funny moments but for the most part is a douche for the time being. The newbs are a mixed bag Kalia can disappear and the only person that would notice would be me because I don’t need to hear her taking about Keith not dating black girls or Keith not thinking all black schools are a good idea, Lawon is funny, Dom is a prick, Porsche will yield us many nude pic for the site so in that respect she’s cool but I don’t really like her or her, Keith I dunno he’s such a non factor right now, Shelly is a more capable Kathy and I never liked kathy, cassi and Adam you cool rock on. …

Thank Simon- so they’re pretty much like I thought they were :)

@QAZ- sorry, I’m still not old enough to even be on the show (though I’m not an infant- I’m 19). :P
Well, I guess I didn’t wanna call her one unless I found out. Also, does anyone else find her hard to look at? Well, I’m gay (though not Lawon-gay) but I think I know if a woman is an eye sore, especially as she is in the mornings lol.

Straight and I still don’t find her particularly attractive.

Brandumb (love that name!!!! ), Vegas and Dani talk shit about everyone. Brit said nasty things but it was so entertaining.
J&J seem like nice people at least (but a little boring) I hope they will eventually turn on B&R =)

OK is it just me or are other people having trouble following and understanding the narrative written by Simon? I read all the posts and comments. I even go back later to check if I have missed something but I feel like I dozed off and woke up in the middle of something with no understanding of what is going on. I absolutely loved this site last year but this time around well…… Last year Simon would let us know ie: they are getting ready to pick the players for POV then tell us who was picked, what they have to do and who won. You know a beginning a middle and an end. This year I am assuming alot and using the words above pictures to figure stuff out. I had no clue about the have not competition what they did who won what it meant for the losers until I saw the show. Sorry to sound ungrateful or whiney I just got used to understanding everything last year. Is it only me? Thank everyone for any help.

There’s nothing going on in the house for the last 2 hours.. just random conversations about stuff

Thanks for taking the time to write and I do understand there is a lot of nonsense talk and nothing going on a lot of the time But did you understand what I meant about not telling us stuff that you used to keep us up to date about?

The have not competition took place before the feeds even came on so its impossible for Simon or Dawg to write about it. He has shown plenty of pics of the four losers sleeping in the have not room so its not too hard to figure out who lost.

As for the POV and other stuff it you go back and reread the other posts I think you’ll find exactly what your looking for. There has only been a POV comp and POV ceremony was yesterday and Simon/Dawg clearly said what happened each time. For example the entry from Sun July 10 “Big Brother 13 Spoilers: POV Results: Rachel Chooses NOT to use the POV! Porsche & Keith up for eviction this Thursday!”

I think Simon and dawg are awesome! You have to remember its been only one week. Not much has happened to even write about.

It is not just. you. I have asked about Dick’s statement and not an answer but a link to a website with no textI. I have no speakers on my laptop so I cannot read lips. It is not quite the same.

You must have a really cheapo laptop not to have built-in speakers. Or spend a couple of bucks and get some.

I don’t think that it is Simon that is hard to follow; the show seems to be more complex this year with the partnering situation…I think it will get more interesting as people start getting picked off. I think B & R will turn on J & J and that will shake things up a bit. Don’t like Portia at all; Shelly is stupid and boring; not sure if I like Kalia or not yet (would like to have seen her vote Portia out); Cassi and Adam are cool; Dom is a cutie (love those Asian boys)!

I hope BR and JJ duke it out…

Ironic Rachel would think someone is talking about her when they say “prostitute” she knows her lifestyle better than anyone.

so does anyone know what happened to evil dick???????

What those bastards do with Franklyn?

wtf is going on with Dick?? so he left the house but why? so now are they going to give to golden keys one to dani and one to the survivor of elimination? what happened that made dick go home????????

She says it was stressful when they got out of BB11 and they opened themselves up to people and that is what caused their scandal. Brendon said he was insecure and he didn’t know about their relationship. He blames the internets and all the site that said Rachel was out doing this and that.. it worried him.

Simon I found a pic for Adam

LOL thats a good one

Cassi has class and it’s a shame she won’t be staying, Brendon has an ass (as in Rachael), Dani & Shelly playing both sides of the house, Porsche is a spoiled wanna be, Lawon is funny and just taking up space, scruffy Adam won’t be in the house long, Dom’s face shows his emotions, Kalia is just being Kalia and it was smart to join the vet’s right from the beginning, and Jeff and Jordon are laying low, and smart not stirring things up. I wonder how long it will take Brendon to wake up and smell the roses that with Rachael he will never fit in with the people he wants to socialize with in the real world no matter how hard he tries to change her. A leopard cannot change it’s spots, and Rachael will never be completely happy having Brendon tell her how to act and what to say, he is too controlling.

Shelly and Kalia make me SICK! They handed the power over to Rachrat and Brendog. Then they sit there and act like they didn’t do anything. Kalia got hurt in comp BS she is just to lazy to compete.

A LITTLE OVER WEIGHT????!!!!! She is fat and lazy. If she isn’t stuffing her face with food she is flapping her jaws a mile a minute. Does she ever stop talking? Accept for food? I’m sick of the sight of her on AFTER DARK.

Does anyone know a live chat for BIG BROTHER? I can’t find one.