Big Brother 13 live feed Gallery for July 10th 2011. Each minute we take a series of screen captures from each Live Feed cam in the house and upload them to our Gallery every 10 minutes. This system runs 24/7 expect thousands and thousands of Screen Captures every day. Alerts are sent out via our Twitter account @BigBspoilers and Facebook page.

If you want to go back to these times and watch them on the feeds you can using a rewind option called Flashback. Try the Feeds out Free 3 day Trial 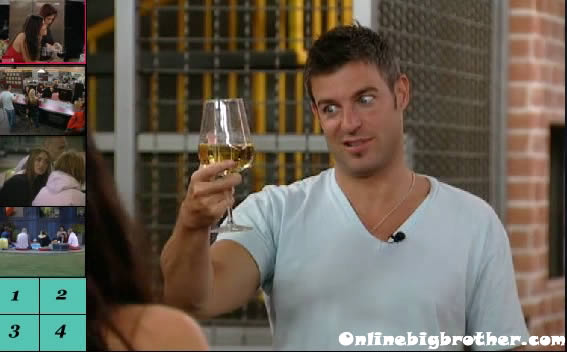 Awesome season so far! and it’s barely 2 episodes a few sho2 after shows I love it! I wish that some people were not what they seem but so far everyone is pretty much predictable which make you think who will win & stuff like that:

Rachel, kinda crazy but has her head in the game she just has this “I’m going to Slay them all & win this season” written all on her face. Brendon seems so bi to me I wouldn’t be surprised if he had bi sex 3some with Rachel months back & enjoyed the boys more. If he came out gay or bi on the show holy cannoli the buzz on this show would go crazy! other than wild sex appeal he has he has shown good vibes off everyone & looks ALOT more comfortable with his self than last season.

Danielle is like BB royalty and almost seems like she’s paid under the table tho stay forever in the show, even after that whole golden key thing. damn what a good idea gone to waist. thanks Dave. not!

Ohh and that puppet blue fortune teller booth looks like something out of a Telemundo. good times!

Wow to the wow what an interesting season.

Jeff & Jordan are America’s favorite couple so it’s always a Kodak moment when they have one on one conversations with eachother, especially in the hammock!! Jeff’s accent is so thick you have love him. & Jordan’s accent is a-dorable. they need to do cartoon voices on family guy. Jeff & Jordan have been through this for so long plus the amazing race let down that I was even sad about. damn that beauty pageant non history knowledge girl beating them in the race. Let’s hop J&J don’t eff it up near the end of this season.

Lawon is just there for entertainment. it would take weeks for him to prove to everyone he can join an alliance but highly not and will be voted off soon. snap!

Shelly doesn’t seem like right now she can go far in the comp but I think she’s the most underestimated house guest. she seems like she packs a punch & could probably use a rifle really well so everyone better watch out! and duck!

Cassi & Porsche are on the same boat and could probably be ridiculed just for being cute & picked on the show because they”re cute but they will soon have to gain inner courage because they both have what it takes to go far like how Rachel did or how Jordan did.

so glad Keith could be gone.

Kalia I feel like won’t last that long unless she sparks up more friendships & shows skills on the challenges. She see,s so talk show hostish she could be on that CBS show “The Talk”

Adam is so sling blade goat rapist demeanor is gone once he starts talking and being somewhat pleasant and nice. He is lazying to much this past week and that’s not good because most of the people on here already forming fast friends, alliances, superhero bloopers, failed all female cheer leading attempts. and by just staying away from them all most of the time will might not last that long in competition.