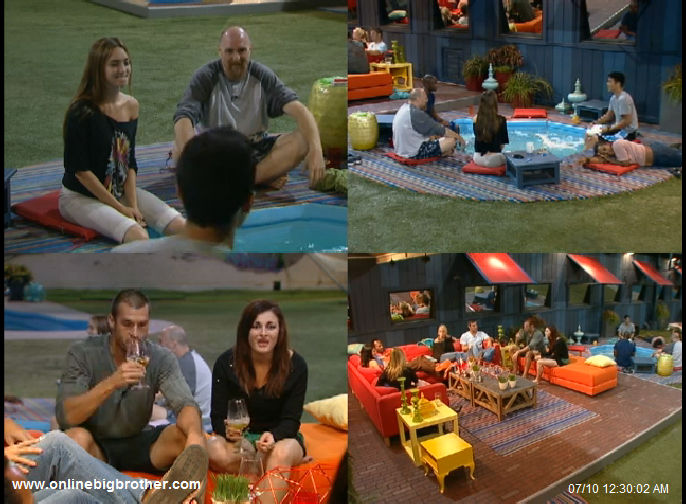 12am In the backyard are Jeff, Jordan, Rachel, Brendon, Dani, Lawon, and Porsche. Dani starts talking about Nick Starcevic from her BB8 . Jordan doesn’t have a clue who he is so Dani explains that he was on her season and they started dating and that after the season ended me relocated from Minnesota to LA to be together, but that it didn’t work out. Dani asks Jordan and Rachel who the worst duo for them would be to see when they came into the house? Jordan says that she knew Dick was coming because Dick called Jeff before the show. Jordan says that she didn’t know that Brendon and Rachel were going to be here too. Rachel says she had no clue which duos were coming. Brendon and Rachel say that they didn’t know anything until just before the season was to start but that they guessed Jeff and Jordan would be on after they heard their interview on the Baub Show. They thought this season was going to be Villains (Brendon/Rachel) versus Heros (Jeff/Jordan). Jordan starts talking about school and says that she talked about taking classes in the interview but that she won’t be going this fall unless she is evicted early. Brendon talks about how he will be in school till he’s 35. Jordan mentions that its because he wants to be a doctor or get a PHD. Rachel says that Lawon did 10 years of schooling. Jordan farts. Jeff yells gross and covers his nose with his shirt. Jordan says that she thought she could sneak one by because everyone was talking. After awhile, most of the move inside.

12:50am In the kitchen, Brendon, Rachel, Jeff, Lawon, Dani, and Porsche are talking and joking around. Rachel starts talking about having Brenchel babies. Dani stops and asks wait did you hear that Brenchel babies? Rachel tells Jeff and Jordan that she wants them to act out her and Brendon in the diary room and that Brendon and her will act out Jeff and Jordan. Brendon, Rachel, Dani and Jordan head into the lounge room and Rachel keeps talking about impersonating each other. Rachel then gets up and closes the door and says that they should start studying soon. Brendon comes in and says that he thinks they should be out in the backyard so that the newbie’s aren’t able to talk game. They start talking about what Jeff does when he is annoyed with Jordon. Rachel says that Brendon always tells her not to talk to people because she gets too emotional.

In the backyard by the hot tub, Porsche, Shelly, Kalia, Dominic, and Cassi are talking. Kalia starts talking about how horrible it is to be on the live feeds where anyone can freeze frame the video and take screen shots of their nipples slipping out. She says that in one second its all over the internet. Cassi, Kalia and Shelly talk about how bad they feel for Jordan where after her towel slipped her breasts were all over the internet for everyone to see. Cassi says that she told producers that if there is any chance any part of her body could get caught on camera …that she would not do the show. Brendon heads out into the backyard and joins in the conversation. He tells them that the only place that is off limits to the cameras is the toilet. Cassie says that she is worried that the cameras are going to get a boob shot and says that she might just wear a bathing suit all the time. Porsche says that she doesn’t really care …that her breasts are good looking ..she just doesn’t want her pictures out there. Cassi says I dont care I dont want my breasts out there. Cassi really starts stressing out about it. Brendon says that she will get lazy and forget, everyone is bound to get a shot and tells her he used to change under the covers but if you want to be one hundred percent sure, you should go into the bathroom to change. 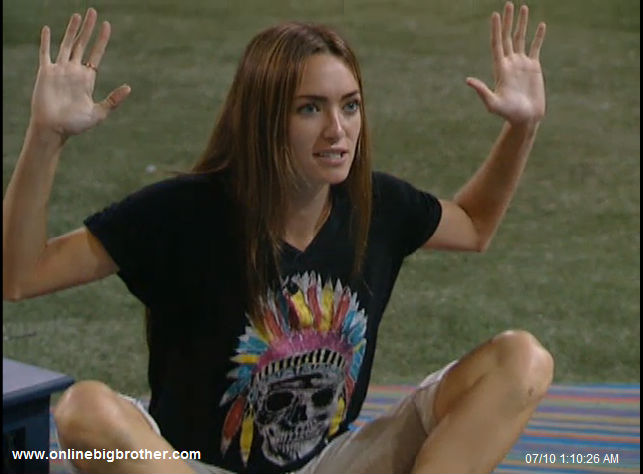 Back in the lounge room, Dani is tell Jordan, Rachel, and Kalia about her family and how her dad Evel Dick hasn’t talked to her brother since before BB8. Dani says that they were raised by their grandmother and that she has never known her parents as together. Brendon and Jeff come into the lounge room with them. Kalia starts freaking out because she thinks the fortune tellers eyes have moved. The conversation changes to talking about the types of questions Julie Chen will ask them. Meanwhile, in the backyard Adam, Cassi, Lawon and Dominic are all sitting around the hot tub talking about Keith. They talk about how he is the worst player of all time. Dominic starts telling them that they all need to vote together and that he doesn’t want to vote against the house. Lawon says that he will definitely vote to evict Keith and doesn’t care if his vote is the only one.

2am – 4am In the backyard by the hammock, Cassi, Adam, Lawon and Dominic are talking about Keith. Lawon says that it’s a game, but that he has integrity. Cassi said that Keith will be embarrassed when he leaves the house and sees how he acted. Adam talks about how Keith told him that he had to save himself when he called out Lawon. Adam says that he doesn’t understand his strategy, and that Keith didn’t need to do that before the POV ceremony. Dominic tells Lawon that, if Rachel and Brendon change the nominations and put up Kalia/him, that Lawon will be safe and Kalia will go. They talk about how they need to think long term in this game. Daniele comes outside and the conversation ends. Daniele tells them that the fortune teller’s eyes moved. The conversation moves to talking about being caught naked on camera in the house, to talking about past seasons and then about sports. Cassi and Dominic leave the hammock and sit with their legs in the hot tub and start talking about how they want Brendon and Jeff out of the house. Meanwhile, over by the hammock, Dani asks Lawon if he is going to vote Keith out and Lawon says that he is for sure voting to evict Keith. Dani then asks him who he and Kalia would nominate if they won HOH. Lawon pauses and then says Adam and Dominic. Lawon talks about how Adam is a big threat in this game because he knows a lot about the game and he’s a physical threat. Dani says that she can see Dominic being a threat later on. 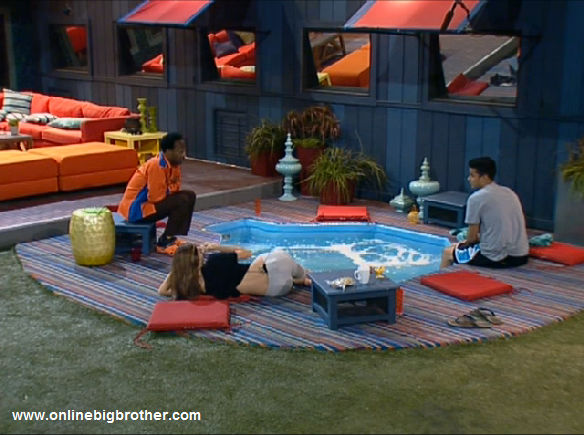 4am – 5am Lawon, Dominic and Cassi are the only still up. They are sitting by the hot tub talking about how they think the votes are going to go this week. They start talking about needing to study for the competitions. Dominic asks them how wouldn’t it be great if he was America’s player? They talk about how they don’t think their is a saboteur this season. They talk about other random things and then decide its time for bed and head inside. They go into the lounge room and Cassi examines the fortune teller and realizes that they eye haven’t moved and that it’s just an illusion depending on where you are viewing it. At 5am all the houseguests are fast asleep in their beds…. 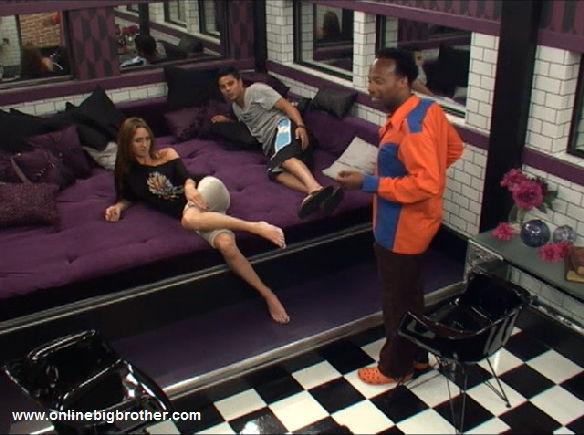 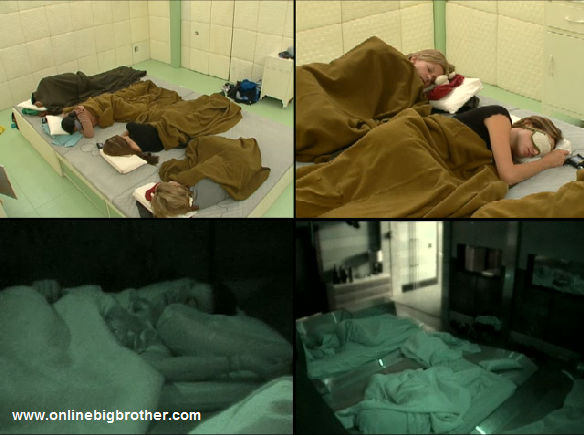 5:40am All the houseguests are fast asleep….

Check out https://bitchybigbrother.blogspot.com/ it’s one of the best BB blogs out there

“Cassi says that she told producers that if there is any chance any part of her body could get caught on camera …that she would not do the show.”

o.0 does she not realize this is big Brother

If she’s gonna be all paranoid about it change in the bathroom or something like that, might as well evict her now.

For those of you who don’t have twitter, this is what Evel Dick tweeted on July 9th and last night:

“But to squash the rumors, I am not in jail, don’t have cancer, my mother son and girlfriend are not in the hospital & I was not kicked out” – tweeted July 9th

“Don’t bother asking me questions, I won’t be answering… I will let you know when my public statement is posted on @RTVZone.” – tweeted July 9th

“Some things in life are more important than a tv show. Those things give you perspective in your life. This is one of those things” – tweeted 15 hours ago

” I wasn’t booted and they will address it on Wed show. I will be making a statement on @RTVZone tomorrow” – tweeted 5 hours ago

I’m looking forward to his statement…I am too curious a person and hate not knowing! Lol

I hope Keith does go this week. Drama, drama, drama. He’s played it wrong from the get-go.

‘some things are more important than a TV show’………how about your leaving your daughter in there? He’s had some time to come up with an explanation now. Was it more important than her? He kind of screwed her. Does anyone think he has drug or alcohol addictions? He looks like he does and I was wondering if that had something to do with him leaving and screwing his daughter?!

Actually I think it works to Dani’s advantage that he left. As long as Dick is in the house with her, everything he does affects her status in the game, good and bad. If Dick makes an enemy, and we all know that he likes to stir the pot, she is guilty by association and gains an enemy she didn’t go looking for. Now she is free to play for herself, make her alliances and enemies without her dad calling the shots. She played a fine game last time, but we will never know if she would have made it so far without her dad. And his leaving gives her a free pass to final 10. As far as I see, it’s win win for Dani.

I agree with you. On the live feeds Daniel refers to her father leaving her after convincing her to get on the show though. It makes for a better game for her but a better relationship with her dad? Not so sure. Not that they had a great one to begin with.