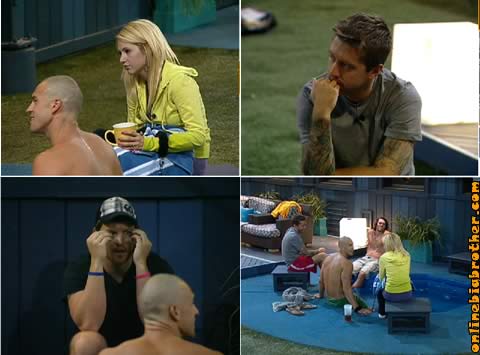 10:00pm Matt, KAthy and Brit talking about coffins. MAtt wonders why they don’t make heart shaped coffins for couples that die untimely deaths. Brit tells them about a guy she new in high school that really liked golf and he was buried in a coffin that had a gold course air brushed on it. 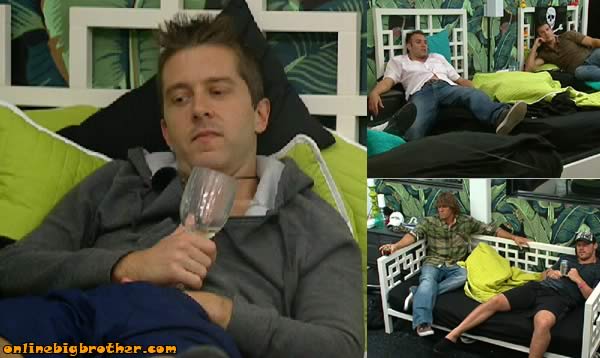 10:07pm Brendon and Hayden Brendon asking a bunch of questions about what is going on in the house. Whats ragan doing, Whats, Brit doing, are they campaigning against people. Brendon says brit causes all the drama, HAyden agrees says that Brit caused everything between her and Enzo. They compare notes about how the blow up started between Rahcel and Brit.

10:15pm Kitchen Enzo, Hayden, and LAne They are talking about Brendon being by himself but he doesn’t know it yet. Enzo says they are all part of the “athletic alliance ” they all laugh they decide to change the name to the ******* alliance.
Lane to Hayden: “what is brendon asking about”
Hayden: “he’s asking about if ragan and Brit are campaigning and he wants to know what ragan was sayign to me in the hammock”
Lane brings up earlier today that Brendon was looking at Matt somehting crazy trying to read his lips. Enzo:”we’ve created a monster we gotta put him down”
Lane asks if ND is getting pissed because they aren’t talking to him as much. Enzo: “he’s getting jealous.. so what do we do we get rid of him next week” Hayden: “we need to”.
lane thinks they should put up brit and ragan and backdoor Brendon. Enzo tells them that Brendon thinks no one will put him up next week because he made a deal with everyone. Lane says that Ragan and Brit will be putting him straight up.
Enzo: “bredon is freaking out thinking about brit and ragan winning.. he thinks we might not win HOH”. Enzo warns them to get ready if Brit/Ragan win HOH becuase Brendon is going to throw them all under the bus he’ll saying “when i was HOH enzo and hayden were talking mad shit about you guys (ragan/brit) trying to get you up on the block”. hayden and Lane agree thats why they want him out asap. Enzo says if Brendon brigns up anything about them he’s going to deny everything tell brit and ragan that Brendon talks shit and get into Brendon’s face about it. They are trying to decide if they need to win HOH. lane thinks they should throw it to ragan and Brit because they can get Needledick out. None of the three want to get out Needledick becuase he represents 2 votes in the jury.

10:38pm hayden with Kahty and Brit telling them about his grandfather needledick and Matt playing int he tournament

10:45pm NeedleDick beats the Gremlin and wins the pool tournament

Evertime I hear the BRAgade (Bozo,Lame,Hairyden) taking about throwin anouther HOH I want to see there asses on the block. It just drives me that they think they can coast without winning anything. I hope next year the losers of HOH get 20K subtracted from the 500k for ever HOH they lose maybe then people will start to play..
This is the reason I like the special powers they give out just to make everyone a little uneasy about trying to coast, would make you think twice after you get special non and booted when you thought you could coast for that week .Bozos face would drop if Matt up’d him in his place with the DPov, I know will not happen but would be funny..

Thanks for that idea. I’m gonna have sweet dreams tonight just imagining it, even if it is impossible.

Simon, what time do you stop posting updates and comments at night west coast time?

it really depends.. last night I was up later then usual and I woke up in the middle of the night.
the earliest would be midnight the latest would be 3

Well, you see, Simon, I sleep with you. I just need to know when to stop hitting the refresh button and instead hit the sack with you.

sure i’ll send out a message when i leave.

Wow – Im surprised that Lane suggested putting up Brit and Ragan (and try to backdoor Brenda). Why not Ragan and Kathy? I thought he really cared about Brit. I guess he is fake too.

Simon, I am thinking Ragan kind of looks like Herman Munster. What do you think? LOL

yeah your right he does

The Excitement
Reply to  Simon

no no no no… Toby! from The Office.

Simon, who is the Athletics alliance?

brendon is the only serious member

it is hayden, enzo and lanes fake alliance with brendon.

here is what i found abouth diamond veto

The final Veto competition of Big Brother 4 resulted in another elevation in power. Called the ‘Diamond Veto,’ and presented with a clear Lucite medallion, the Veto Holder could not only remove a player from nomination, but also earned the sole vote to evict. Alison, who was nominated, won the Veto, used it, and ultimately evicted Erika from the house. The Diamond Veto was only offered on this one occasion.

In Big Brother 12, Matt was presented with a clear, rhinestone studded “Diamond Power of Veto” for opening Pandora’s Box. Not only does it allow Matt the right to veto any nomination, he will be able to choose the replacement nominee.