10:00pm Cabana Room Lane, Kathy and Brit Lanes asking the fish keeper kathy if she’s fed the fish, She tells him she usually feeds them later in the night. Lane talks about one of the fish being a fighter and another one looks like it’s given up and has stopped eating. He asks brit to list off the houseguests on the memory wall in order. She does and she right.

10:10pm Taj Rachel and Brendon She’s crying becuase production told her she’s not allowed to get drunk tonight … Brendon is there trying to comfort her.. they start to kiss I press mute. Dawg says Rachel says expect the unexpected a lot.. 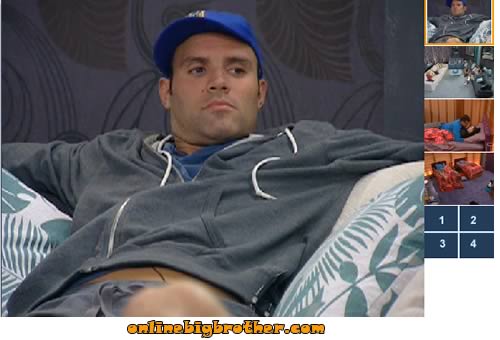 10:35pm Living Room Couch Enzo and Andrew Enzo is talking about his wife and daughter and how much he misses them. He says his daughter is only 8 months old and she’s the cutest little thing. He goes on to explain that she loves having her belly rubbed and tickled and she loves watching the TV.. “She just stares at the thing for ever” They talk about the HOH and how a lot of the people on the boards were really fighting. Andrew thinks it’s bullshit that the people that hung on the longest are the once given the slop. Meow Meow brings up Monet and how the game isn’t suited for her. HE doesn’t think being sneaky and scheming is in her nature, he’s happy for her she got 10g’s and gets to go home and see her family. Talk moves to Matt speech and how awesome it is, They laugh at the Chen bot Comment.

Kathy doesn’t know whether to be Matt’s mom or maid this week.

Call me crazy but I like Brendon, Britney, Andrew and Kristen in that order. I think Brendon screwed himself alligning/showmancing with Rachel..she is annoying and thinks she is in highschool “breaking up me and my man”– really? barf!

I like Britney, Kathy, Andrew and Ragan.
I can’t stand Enzo and his kitty talk!
I can’t wait until Andrew figures out the Brigade. That is who I think will spot it.

Repost: I think it will be Matt, Ragan, Brit, and Lane. That is if Matt can keep the influence he has on both sides of the house and decides the brigade is too powerful for him to take on once at the final four stage.

I really like Kristen!! I think she’s playing the smartest at this point. She’s laying low and not making any promises while still staying close to all the real competitors!! Thats how I would play the game too!!!

C’mon…..Enzo adds a certain comedic angle to the whole thing. He needs to stick around a bit longer. Rachel could go…..she is just getting really annoying. No one but the fish would miss Kathy. It will be fun watching Brit scramble this week. I say she hangs onto Lane. No female in the house will have her.

I couldn’t agree with you more! she is so ANNOYING!

“THEY ARE TRYING TO BREAK ME AND MY MAN UP” Really??? she is so annoying! I can’t stand THEM!

If she says “my man” one more time, then I have no choice but to reach into that TV screen and slapping her ugly face! I can’t believe she would rather have Brendon than the half million dollars! That’s why Rachel needs to go soon, however, I think Brendon should go first because he’s stronger of the two.

Boy George is going to try to kiss in with Britney this week since Kristen is a dolt and Kathy is nothing more than a housekeeper! I think that is why they brought Kathy on the show to keep the house clean because she isn’t good for anything else!! They should have chosen BBGrandma’s daughter!! I am sure she would not be as lame as Kathy in the comps or strategy!

What kind of a woman is this Rachel anyway, cry’s cause she can’t get drunk !!! She really needs help !!!

I told you guys. I told you. I KNEW the Brigade was money this week. As for those thinking a floater is going home this week, NO WAY. Brenchal is finished. No question about that. It’s just a question of which one. If I had to put money on who, I’d say Brendan right now, but getting Rachel out is just as well played.

After this week, Brigade is on the precipice of being UNBEATABLE to final 5, maybe 6. At some point Hayden will choose Kristen, but that’s a while from now.

The brigade is a bunch of morons. Always bragging about how it’s all going according to their plan? Until Matt won HOH they weren’t doing anything. Meow meow? Really? What a numbnut.

I agree with you 100% about Matt. Matt going on about “I told Rachel to put me up. See she does anything I tell her” uhh…she did it because she wanted Monet out and knew you were the better choice than Anderw, plus you volunteered yourself so no one would be mad.
I liked Matt and I think he’s an awesome guy but he aligned himself with the wrong people and I’m REALLY starting to dislike him. Lane I don’t mind, Hayden is a douche with a capital D. And ezno…he belongs on Jersey Shore (especially with the name “meow meow”) more than BB.
I can honestly say if Enzo and Britney (aka the less hot version of Regina George) don’t go home soon I’m going to stop watching the show. I get so annoyed watching the shows it’s not worth it. It’s not fun, it just makes my blood boil. Enzo’s annoying and I HATE peoeple like Britney. She is pathetic and obviously hates herself if all she can do is put down others.

I agree. Enzo is the douche bag this season. When he speaks ,its like nails on a chalk board.

Haha, I caught the Regina George reference and I was thinking the same damn thing! OMG every time her mouth opens, something amazingly ignorant comes out. You cannot backstab EVERYONE in this game; you have to choose wisely (like Kristen) ….how does Brit not know that if she watches the show all the time??

BTW–Simon. Thanks a bunch for this site.

I followed last year as well, but just started posting this year.

Chima was the stuff last year. She made that Big Brother an infamous Big Brother season. I was not a fan of hers ‘mind ya, but she DID make it interesting.

Again, thanks for the site. My daughter and I follow it all the time now.

Here is how I see it going down…Andrew already snooped out the slowmance of Hayden and Kristen. At some point he will dangle that over their heads and take either Kathy, Brandon, or Ragan with them once Matt and Meow Meow start pissing off the entire house. People are already starting to suspect stuff…Matt is too talkative…he is going to blow the entire brigade alliance with his mouth…just wait and watch

Have to agree I feel like Matt is talking too much….He is too confident…but a hell of a liar. I cant figure out if he is a genius or thinks he is smarter that he really is

I thought Mike “The Situation” was the worst nickname ever, but Enzo proved me wrong. Meow Meow? Really? you got Beast, Animal, Brains, and Meow Meow. Enzo should go ahead and turn in his man card. Meow Meow should go down in history as the lamest nick name of all time.

I am looking forward to watching the Brigay-duh go down in flames.

EB
Reply to  Brit's a b!tch

LOL!!!! I have to agree with that! What grown man calls himself “meow meow”

Folks, you are wishing for too much. Andrew sniffed out the Hayden/Kristen thing cause he was in the SAME bedroom as the scent.

He knows nothing of the Brigade and IF, IF he were to hang that over their heads, he’s gone. At some point, and I mean next week prolly, the Brigade is going to start bullying people to do what they say or face the consequneces.

If one of Brenchel goes home this week, and I think tehy will, the numbers of the Brigade get scary. They are 4-Deep Yo, WITH Regan and Kristen by their decide by default. That is STRONG!!!!!! The odds of them winning HOHs after this week IF, IF Brendan goes this week skyrockets. Do the math.

I want Brendan to win because I feel bad for him that like the whole house is against him execpt rachel.

Actually that disease is real (his wife doesn’t have it but it’s a real disease). It’s rare but everything he said about it is true. Andrew thinks because he’s a podiatrist he knows every disease out there? Give me a break. He deals with people’s feet (eww might I add). He doesn’t know about bone diseases, it doesn’t affect his job.
I do agree that Matt should just shut up and sit back. He wouldn’t even be on people’s radar’s had he not put himself there.
I’m with you on punching Britney in the face too. I may not be Racehl’s biggest fan but Britney sits there insulting her ALL day? Really? You hate yourself THAT much and are THAT jealous that you do nothing but call her a hooker and insult her breast implants all day? Pathetic. And If I see her cry one more time, I’m parachuting into the house and punching her.
Ezno should be on Jersey Shore not BB. “today on jersey shore the situation and mewo meow get drunk and bang some ugly girls with low self esteem” see…it fits. lol.
I’ve said it before and I’ll say it again. If Enzo and Britney aren’t gone soon I won’t be watching BB anymore. They just make me so angry to watch.

what happened between Hayden and Kristin

This Rachael girl is so annoying. There is a reason a beautiful,sweet and smart girl is single. Its because she is nuts. She reminds me of a clingy stalker type. It is really sad to watch. When Natalie was talking her crazy shit ….you had to forgive her because she was kinda dumb. But,Rachael is a scientist so its just crazy.