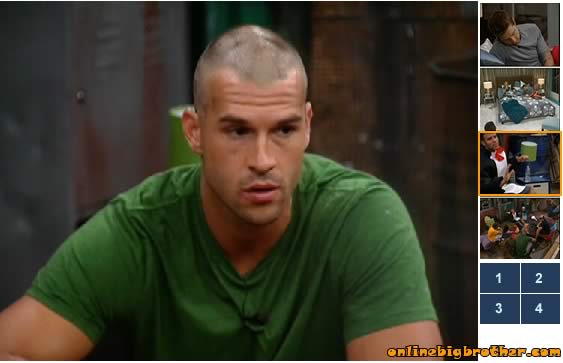 4:01pm HOH Brit and Lane
Lane: “you upset”
Brit: “I’m BLANK pissed becuase everyone acts like they back me up but you all have your own plans for matt and thats better for you all it’s not the best for me”
Lane: “we didn’t do anything to jeopardize you at all.. your safe”
Lane defends the brigade tells her that Matt was the one that threw the competition they were all trying. Brit Reminds her that Brendon is coming after me. Lane doesn’t think She Brendon’s target. Brit: “if ragan wins POV next week then i’m gone…. I’m pissed off becuase Brendon hasn’t come after you and attacked you and your getting me to do your dirty work”. Lane: “I know it sucks”. Brit: “you all are friends with him, All i wanted to get BRendon out than we were going after matt”. Brit: “you guys are all useing me to do your dirty work.. If i take out matt then i have no jury votes”
Lane throwing Matt under the bus saying that Matt was telling us he’s not the saboteur when he really is so she can’t listen to him. Brit tells LAne that Brendon is coming after her she’ll be gone next week, Brit says he’s winning everything. Lane says that Matt and Ragan can’t win anything anymore becuase theres no more puzzles just skill and quizzes, he points out that Him and HAyden can win those skill comps. Brit says Ragan is going to be so pissed at her so she’s got no one left in the house, she says Ragan doesn’t buy into Lanes and Haydens Matt’s a bad guy conspiracy. Brit Asks lane why does Brendon win every comp? lane explains that everyone is thinking long term so they all don’t think Brendon leaving right now is the best. Brit goes on and on about how Brendon is after her Lane sticks to his story that She is safe next week if she takes out Brit. Brit keeps reminding him that Matt would not put her up next week. 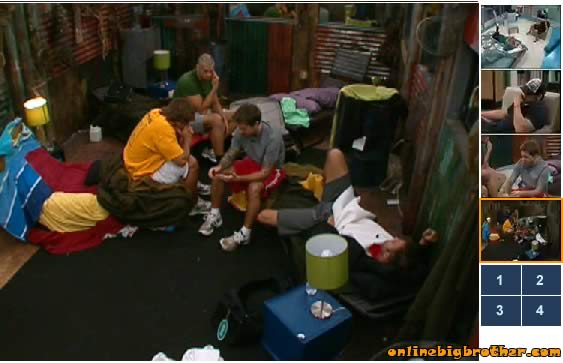 4:30pm Matt, Hayden and Enzo They are talking about the comp how it was fishy how Brendon won. Hayden says that things really seem set up. Enzo: “We’re all pawns… We’re all Hamsters”

4:40pm HOH Brit and Enzo He asks her hows she doing, Brit says she’s pissed off. Enzo starts off right away throwing MAtt under the bus saying that Matt took all the prizes. Hayden joins them and the both of them start tell her that MAtt is a snake and he needs to go home. Enzo: “Get him the BLANK out of here, he thought he was safe that’s why he didn’t try”. Brit agrees says that Matt thought he was 100% safe he told her last night.

Enzo tells her that his target is Brendon and Ragan but Ragan is the first target. Hayden tells her that Brendon will not put her up he is certain of it. (and Brit eats this all up). Brit starts saying that MAtt is going around telling her that he won no prizes and your all won the prizes. Enzo says that Hayden, himself and LAne are telling the truth and MAtt is lieing (and Brit eats it up somemore) . Brit says that matt taking all the prizes will cost him the game, she thought before the POV comp if matty really wants to be in the game he better win this comp. Enzo and Hayden are getting really excited telling her that this is the reason they need to get him out he’s playing all of us. Enzo and HAyden tell her they want final 4 with her and Lane. They promise to back her up and to take out Brendon and Ragan during the double eviction. (Brit eats it up some more….) Enzo really excited about matt being the saboteur he goes on and one about it and how thats reason enough to take Matty out.

YES, LOVE BRENDON, just hoping he can win HOH and get rid of that liar Britney. I remember that there is a season that someone won BB without lying. I cannot see how Matt used his wife and gave her an illness. Now, that is too much.

B Nuts
Reply to  Natasha

Britney gets to do what Regan’s been trying to do all season and “backdoor” Matt. Regan is really going to be upset and won’t let that girl come between him and his man! Ahh, finally this season is picking up.

Did someone say there was going to be a double eviction this Thurs b/c I had figured when they lost that player @ the last minute that the double eviction episode would have been canceled. Anyway, the season is maybe finally going to pick up…

blah
Reply to  B Nuts

Good one!
Everytime I hear Ragan say back door
and a male is involed I chuckle lmao

My sentiments exactly. Anyways, its a double eviction week – I have a feeling if Britney backdoors Matt, she has a very big chance of going right after that.

Please for the love of god let britney put up the gremlin in his place….if the gremlin or his little bitch boy win bb ill be so pissed off…anybody else wins ill be happy

GHAAAAAAAAAAAAAH
Maybe they can at least send Enzo packing.

GET RID OF MATT!!!! CRY REAGAN CRY I LOVE SEEING YOU CRY YOUR NOT A GOOD PERSON!

GET RID OF MATT!!!! CRY REAGAN CRY I LOVE SEEING YOU CRY YOU’RE NOT A GOOD PERSON!

what up sucker i said it last week he will win pov and you all laugh, now your darling matt or im gay regan will go home.

I love it..now they’ll start throwing each other under the bus big time. Let’s see how Enzo and Matt play the game now!!

@Mike.. that is exactly what I said when I read that.. Dammit!!!

Now who’s gonna be the double evictee?? And Brendon gets screwed again with a short HoH week!

People assume Britney will put up Matt. When Brendon takes himself off the block why wouldn’t she put up Hayden? Is there some sort of deal that is guaranteed that backdoors Matt?

I hope she calms down and thinks and does exactly that. Hayden needs to go up. That way Brit, Ragan and Matt can work together to take out the Brigade.

YES!!!! I love seeing the tears of fairy ass Ragan!

OOPS got too excited

It’s probably one of those “how much you want it” that might explain the shaved head. Chicken George and Kaysar did that in All-Stars. Gremlin is probably gone now, he is going to get backdoored as of last night if Brendon did win which he did.

But now Britney can put up Hayden and break up the snoozefest known as the Brigade once and for all!!!

Yessssssss, I literally jumped out of my chair!!

Bring on the gameplay tears

lol knew he would win…pce out matt

gi jane who is that

Demi Moore shaved her head when her character went through boot camp in the movie GI Jane.

WOOHOO sweet! Hope Matt is out the door and if not then Enzo!

When did he shave his head?? O.K.I want to propose now that Brendon has been as good or a better player than Matt — he’s won his competitions by his own efforts and won when he had to. This is perfect and if Britney has any sense, she’ll put Matt up. Matt will be scrambling right now to try to get her to promise not to do that. WHat the heck was the competition??? It took forever!!!

Please, Brendon didn’t win that POV without the useless Brigade gladly underperforming to let him win

So I guess the Charade performed well when
the Midget won those two hoh’s?

I think I threw up a little in my mouth.

this has to be the most back and forth season ever.

Matt: Listen Brittany, that bastard is a solid competitor and you need Regan and I to help you get rid of him. I understand that you like Lane and want to keep him in your corner for a while so you should put up Hayden and We’ll vote that sh!+ disturber Enzo out this week. Then all three of us will play HoH during the live double eviction and send Brendon home too.

nooooooooo!!!!!! where did his hair go??? it must have been what would you do for bb.

WOOHOO!!!! Now Brittany needs some guts to backdoor Matt. Would love for him to get backdoored. He was so arrogant to throw HOH!!!!!! Then the double elimination and Brittany or Ragan go with him!!!!

now what are matt and regan going to say that cant use well he did play in the pov comp. i get to see regan cry like a 4 year old girl when her mom her mom tells her no barbie doll for you.