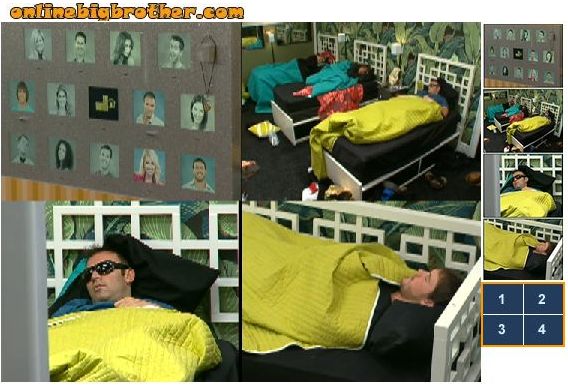 10:20am – 11am Big Brother switches the live feeds to the we will be right back screen. 10:40am The live feeds come back. Enzo is awake in the jumanji room talking about how he hears them banging out in the backyard. Enzo says that they’ve been on lock down for like two hours now. Enoz thinks that some celebrity is going to come in and they’ll watch a movie or Monday night football. Enzo says that the banging noise sounded like in WWF when someone hits the mat. Enzo says that he really thinks a celebrity is going to be coming into the house. They all go back to sleep… Britney gets up to go to the washroom. Enzo, Lane and Hayden talk about being on lock down. Enzo says that they put them on lock down around 8am. Hayden asks what time the POV ceremony usually is? Enzo says its usually at 11am. Hayden gets up to go take a shower. Britney heads up to the HOH room …and tells Hayden that they are definitely building something. Hayden asks really?! Britney says yeah its loud! Britney goes into the HOH room to listen to music. Hayden gets a bowl of cereal and sits at the bar in the kitchen to eat. 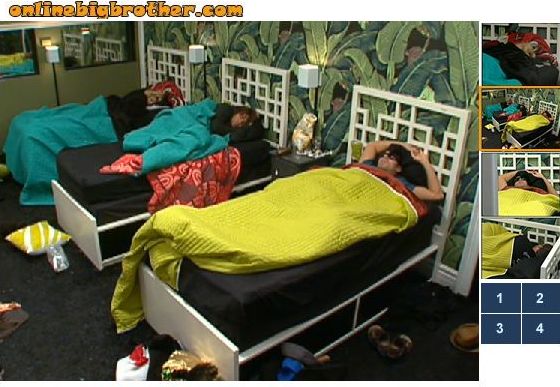 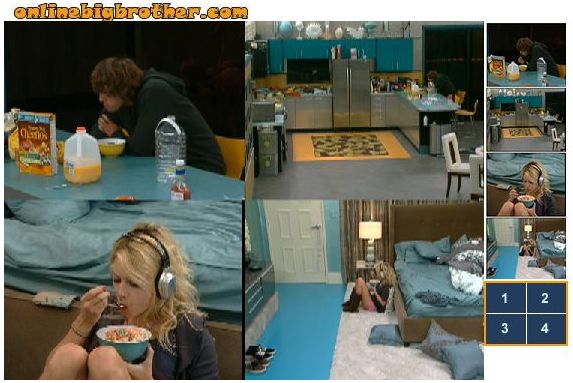 11:10am Hayden comes up to the HOH room to shower. Britney and Hayden talk about how normally on Monday they are called into the diary room a lot before the POV ceremony and they are usually on lock down right before it happens. Both Britney and Hayden think it is weird that big brother is building something in the backyard and usually they have the POV ceremony now. Hayden says maybe we’ll be having the POV ceremony later today??… Hayden goes into the bathroom to shower and Britney goes back to listening to the CD. 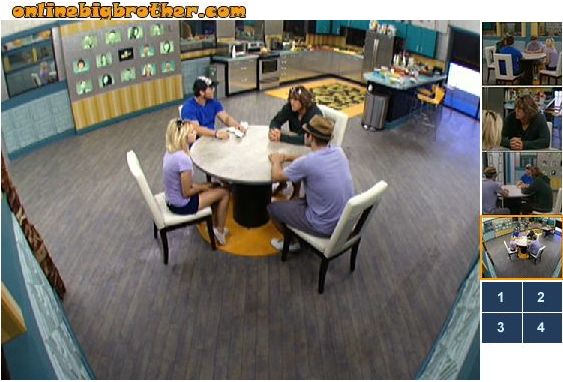 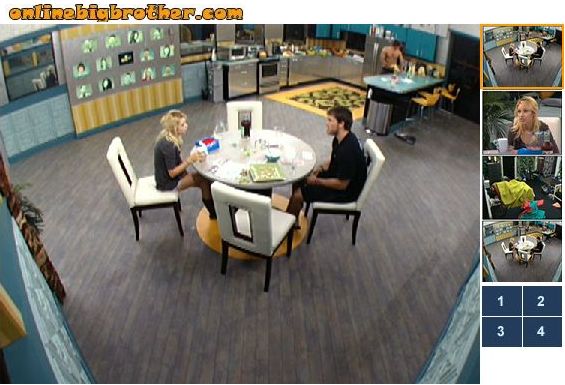 yes another comp! where brit can atleast win something or actually say and make enzo leave!

maybe the celebrity is jennifer anniston, she is coming in the house to offer enzo a role in her new movie

Michelle – Laugh Out Loud Funny! Thanks for that one!

Enzo couldn’t possibly co-star in a film with Jennifer Aniston, he needs someone more famous…

Tha’ts right Enzo, Al Pacino, Jack Nicholson, and Bruce Willis are coming to the Big Brother’s House to get yours, Lane and Hayden’s autographs.
And Britney? Well, Jack, Al and Bruce don’t mess with little girls.

Sometimes I wonder what it must be like inside Enzo’s head. Last night he thought the Live Feeders should watch the fish while the HGs watch a movie. Now he thinks it’s a celebrity coming to reward them & relieve the boredom. This is not a vacation. ??? Why a celebrity?? If his disjointed thoughts aren’t all over the place, he’s repetitve, like a needle stuck in a scratch on vinyl. {I know I just dated myself!! lol}

the only time the brought a celebrity in the house was I think was all stars, with neil patrick harris, what celebrity would want to meet these idiots

They did bring in Jeremy Piven one year. But right, now one could be as big as Enzo’s gonna be. He Gonna Blow Up Large!

I think you are right, I don’t remember what season, but I think jeremy piven was on the show

Maybe Allison Grodner is coming in the house? :P

BB could never get a celebrity in there that is more popular than Enzo. What the hell is he thinking. Celebrities hate to play second fiddle to anybody, so who in there right mind would agree to go in there. Man, he is going to flat out take Hollywood by storm. I can’t wait….I’m guessing the next Bruce Willis. They may remake the Die Hard Movies with Enzo as the lead.

I know then Gaygan would go in and clean it with his tongue.

What happened to the mini shopping spree competition they do? That was one of my favorite comps to watch…. The HGs would trample and claw each other to get the clothes and shoes. Good times!

They normally do that when there are 4 HG’s left – maybe that is what is going on today! And you know Enzo will rack up on that one!

I hope so. And Enzo needs to get as much as he can after he gave all his clothes away. Hayden says how poor he is so he needs to kick, scratch and gouge eyes out for some goods!
Britney should have it easy, just take all the female items!

BB has no idea how offensive and irritating Enzo is — he’s ridiculous and childish in his bragging about how awesome the Brigade is — he doesn’t even pronounce it properly — “bragade” is what he says — and yes, it is a “brag”ade on his part. the whole Brigade BS is like abunch of 11 year old boys giving themselves a gang name and feeling so tough and swaggering about it — Enzo is a child and a pig. I will be so glad when he disappears. “WIfey”, he’s all yours!

Enzo…Lane..Hayden 3 cartoon idiots in a squad playing secret fort in their cardboard box under the dining room table.(No girls allowed)
Bragging about what they are going to be when they grow up and how very important they will be…

wow I learned something today from BB!

i think its gonna be a coup de-etat comp hopefully desgined specifically for britney.Enzo goes up and goes home.

Except for Gnat — also disgusting.

I never thought I would say this, but I think I actually prefer natalie to brit and the 3 amigos

Whatever they are building in the backyard — maybe it will be for a luxury competition where one of the prizes will be a “get out of jail free ” card and Britney will win it and save herself from eviction. Then perhaps she can win HOH on thursday and nominate Enzo for eviction along with Hayden as a pawn and Enzo will go home — he’s so offensive! Those ridiculous sunglasses indoors and in bed! He’s a complete bozo! Enzo the Bozo.

Its probably for the 1st part of the hoh, doesn’t britney get evicted wednesday

REFRESH MY MEMORY. WHAT IS THE COUP D’ETAT?

thats the power jeff was given last season

you guys ever been around a shit talker, enzos just taliking shit. i would hate to see you guys at a rap concert.you guys would piss yourself.it doesnt matter if you love are hate enzo hes still in your head.your making him famous, say hello to the bad guy.love him or hate him hes still on top dumb asses. brigade!

Enzoid couldn’t fight,or find,his way out of a wet paper sack!! Give him a road map and an apple,he MIGHT end up back in Joisey.I hope so anyway. I just hope he doesn’t show up anywhere I am….He’s nothing more than A Disgusting P.O.S. that deserves nothing..I’m sure his wifey is embarrassed,and didn’t think he could REALLY be like he has been in this house..And BTW,has ANYONE whined as much as him this whole season? I think not..That’s all he does!!Complains about every little thing..Although he has calmed down a little since he’s presumably made it to final 3…Whatev….Anyone BUT him for the money

the brigade is the worst name for an alliance in bb history!!!!!!