11:00pm Kitchen Lane, Brendon and Enzo Guys drinking wine talking about sex. Enzo almost lost his virginity in 7th grade he was kissing a chick and she asked him if he wanted to BLANK and he told her yeah. He then ran home to get a condom but he got scared and didn’t go back, Enzo: “i’m not circumcised so I was worried she would think my BLANK is weird and tell everyone”. Lane lost his virginity when he was 15 it was unexpected, he was dry humping this girl and it slipped in. Enzo lost it at 14 and Brendon lost it at 19. Enzo telling them that his wife makes very good money in the city as a investment banker, Enzo: “my wifes going to take all the money give me 10g’s and i’ll be happy”. Hayden joins them and tells them about the time he lost his virginity he was at his buddies house. 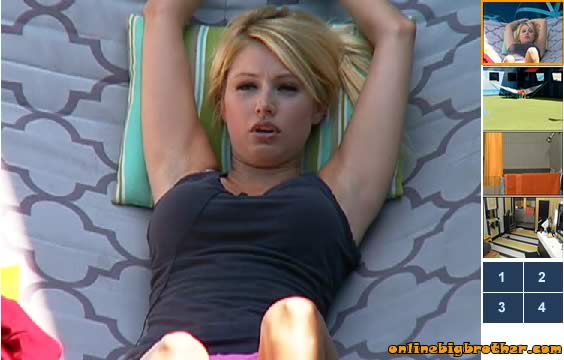 11:10pm Have nots, Matt and Ragan Matt tells him how Enzo and HAyden will tell Matt who they are going to vote for thursday morning. Matt originally thought they were going to split the vote but now he thinks it’ll be to either Lane or himself. Ragan wonders if there is some angle they could try to sweeten the deal with Hayden and Enzo. Matt doesn’t think so.. Kahty joins them. MAtt is telling them that production is claiming they didn’t see Rachel make the pretzel message. Kathy tells them that Rachel told her about the message and then when Brendon came back kathy asked him if he got it and he said yes. Matt: “out of all the things Brendon whines about being unfair he’s actually breaking the rules”. Matt just hopes that when they compete in the HOH it’s something Ragan can wine like a poetry jam.
Kathy is all for getting Brendon out next week, Kathy: “I want to see him roasted and toasted”. She tells him them that Brendon calls her a coward because she voted to evict Rachel. Ragan: “Noooo.. but he doesn’t say that now does he” Kathy days he does.

Enzo is still upset that Britney said he was the saboteur and complaining to Brendon. Enzo, sweetie, no one thought you were the saboteur. If you where the saboteur, that would mean you were doing something. You haven’t done anything. Okay, you have ran your mouth a lot.

BBG telling it like it is… Bozo should of kept his mouth shut about his wife (investment banker) making good money, just how is that going to help you if you ever get ti the F2..

That was stupid wasn’t it. Here he is talking about Britney only being 22 yrs old and she doesn’t need the money and then he says that his wife is a successful investment banker. The guy doesn’t think. Of course, if he was thinking that would be doing something.

I so agree! And, as Brendon is sitting on the bed complaining that Brit and Ragan thinking they are good players because they have watched all of the episodes of BB, yet, wasn’t that Rachel’s claim too? Did she think she was a great player because she knew all of the quizzes and comps because she had seen all of the shows? Face it house guests……you are all liars, backstabbers, suck-ups and whiners……after all it is the name of the game!!

That is hilarious, BBGrandma! That’s all he does is run his mouth. I like when he says “I need to start winning HOH” – what has he been waiting for?!

He’s waiting for others to get their hands dirty. He has my respect for the social game he’s played unless and until he burns a Brigade member. He’s floating on thin ice with me.

I thought that as well but then realized that he’s just not that good at competitions! He keeps saying he’s winning the next HOH, well there’s only a handful of people left – guess the odds are looking pretty good. At this point in the game, he needs to win these HOH’s or else he’s gone!

OK, Just got home from my regular evening care taking of my 96 year old nana!Tossed back a couple of Cazadores shots to unwind and sat down to my second….ok third…no fourth fav addiction and am kinda disgusted with some of the posts I am reading! Not going to give any air play to those tho……….
Simon, I really love and respect your patience and hard working ethics! You are a class act and I personally put you at the top of my list of awesome individuals! You Rock and dont you eva’ fu ghet it!
BB-Ma……..Hang in there pretty little lady! What doesn’t kill ya only makes you stronger! And at this rate you are the strongest lady on here! Give your tired baby a big hug and belly rub from me and my 3 little chi’s! (Chi’s = chihauhua’s) They are dedicating their evening midnite treat to you tonight! 4 Paws up!

Enzo has super smart parents in allowing their son not be butchered at birth but allowing him to make his own decision about whether or not to be circumcised. Male and female circumcision should be out law. This important decision should be left to the boys when they are of age.

Fully concur. My son is intact.

ALL circumcision of children should be ILLEGAL world-wide because it IS a crime against humanity and it IS absolute child abuse in many ways.

Not to mention violation of childrens’ human rights on numerous levels.

Agree, I did not have my son circumcised at birth, I think its painful for the child. However He had to have the operation for medical reasons when he was 1 year old( foreskin was too tight) but he did get anesthia for the operation.

Roseypink–Your comment about circumcision is so untrue. I am an RN, BSN, MSN and circumcision is much safer for males especially newborns, because they have extra foreskin which means they stand a greater possibility of developing infections in the skin folds and preacipe of the penis. Especially newborns and adults who have poor hygeine. Therefore, they just do not circumcise for the fun of doing circumcisions. It helps prevent organisms from getting under that large piece of foreskin and causing infections. Those that are uncircumcised stand a greater chance of skin infections and really need to be more diligent about lifting the foreskin and cleaning it thoroughly each day. I noticed the Meow Meow is one who does not shower each day. Can you imagine the crud built up under his foreskin? How gross!!! Know your facts before speaking!!

I just wish the other players would actually get some common sense and notice Hayden and Enzo hanging with Brendan in the hoh. There just letting this idiot Enzo slide right through the game. The only reason he’s not there is because he doesn’t get into the arguements. He says Brittney is going around talking shit but yet he talks about everyone. For some reason no one tells each other what Enzo says to them. If this was last season where no one could keep there mouths shut then he would have been exposed already. I hope he Enzo finally loses it and flips out on Matt and he puts Enzo up but I doubt it will happen. How can Enzo say Matt, Brittney, and regan don’t deserve to win?? This guy hasn’t done anything. BB shows him as this funny nice guy on CBS but the people who watch BBAD and read these blogs know the true Enzo. A worthless floater who talks shit more then anyone. BB stop playing games and show this guy for who he really is.

This is true…CBS likes everyone to fit into some kind of character though. Since Jersey stuff is entertaining right now…they have the funny Jersey guy character. He is street smart..you gotta give him that. He knows when to shut up, whose ass to kiss & how often. On a side note…Matt gave Enzo and Hayden more than enough hints about his special powers. If they can’t get it…it’s their loss. I’m looking forward to watching this playout. The Rachel/24hrs back in the house thing upset me, but I’m still watching…dissapointed in BB production, but still watching.

“expect the unexpected” that is what you get when you join this reality tv social game. Rachel coming back for 24 hours is just one good example…unexpected and it shakes up the game and makes it more interesting. Unless, seeing Enzo laying all day on the bed and talking about his corny meow meow stuff entertains or interest you more…..coz it’s soooo boring!

I don’t get it…”dry hump and it slipped in” What? Isn’t dry hump with clothes on?

LJ, oh please give your nana a big sofe special hug from me. At 96 she has got to be sooooo cute ! I love the elderly & took care of them for years until I retired. { There Very Special } & deserve a lot of TLC. God bless you for helping her, I took care of my mom & dad & now there with God. I miss that.

Let me see it enzo I will not be scared. I will like it. Signed Ragen