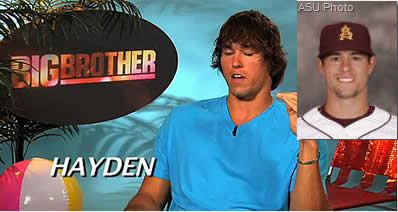 Former Arizona State outfielder Hayden Moss will be appearing on Big Brother 12 on CBS starting this week. Moss was a member of the Arizona State baseball team in 2008 when he appeared in seven games and went hitless in six at-bats. Moss was originally named academically ineligible on February 20th 2008 thus cutting his chances to appear down.
source