I’ll take this Big Brother Rumor with a a grain of salt. The rumour states that Annie is the First HOH Winner because in some of the pre-season promotional material it shows her with her hand closed. Us Big Brother Fans are crazy LOL can;t wait for BB12!
See what they can’t show you on TV!!

When you sign-up for the Live Feeds, you will be able to watch the entire season of Big Brother 12 for ONLY $29.99!! That’s $10 OFF the regular price!

By Joe Brooks
(WIREUPDATE) CBS released the first Big Brother 12 Houseguest cast photo using the popular social network Twitter on Sunday. Many Big Brother fans are looking at every single pixel looking for game clues. While no key is evident in the photo BigBrotherWire has found one strange anomaly.

Upon closer examination it looks like Annie might be holding something in her hands as to hide it from the camera. It just seems like an unnatural way to position your hands while sitting down. 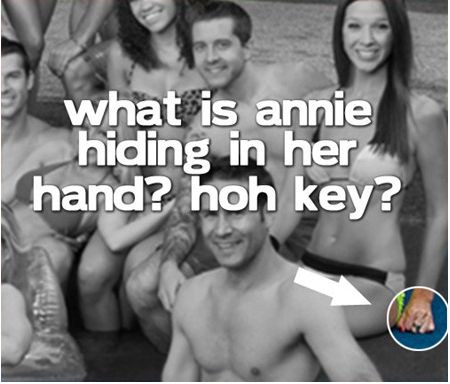 To the skeptics that say the first HOH is done live, Joe Brooks at Wireupdate responds:

Dawg… I’m so confused!! I’m a die hard BB fan. But why are the new houseguests already in the house?? The show doesn’t start til Thursday. Did BB decide to change it up this year or what?

Ohhh ok. I was confused. Thanks

This isn’t anything new. The houseguests are usually in the house for about a week before the show goes live on the air and the internet. If you just want to make sure sign up for the feeds and when they first come on you will see that they are already in the house and the HOH is already in place with his/her nominations already announced.

I AM THE JOE

Thanks for clearing that up Joe..

The first episode Thursday is NOT aired live. Eviction nights are always on Thursdays, but if you notice at the beginning of the episode following an eviction they show what day it is.

This Thursday will be the 1st episode aired but next Thursday when the 1st eviction occurs it will be like Day 12.

I heard annie won the first contest can that be true?

Which one is the “token” gay?