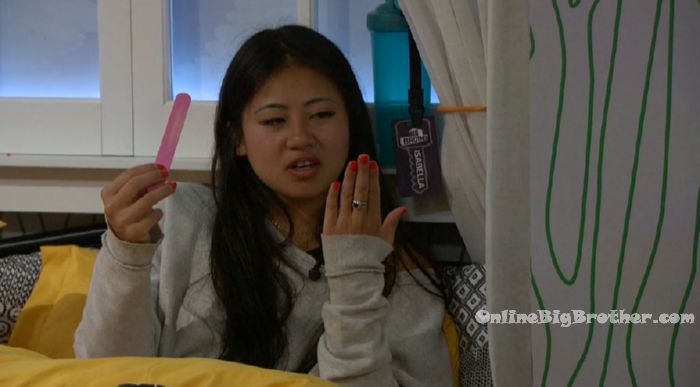 If you don’t have the live feed subscription grab them here. BB21 Live Feeds Subscription Link 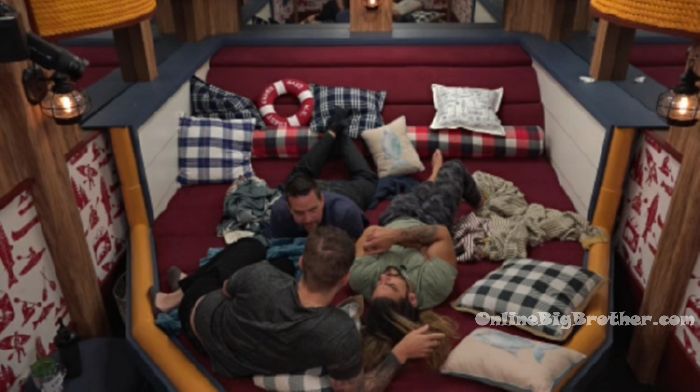 11:40pm Boat room. Sam, Jack and Nick. Sam – I really want to backdoor someone for the first HOH. Jack – well we have to win the veto then. Sam – just to come out with a f**king bang and then half the house won’t know where they stand. Nick – we just have to win the veto. Sam – It would be a little checkmate. Like hey check yourself. Nick – get f**ked! Sam – it would be fun. Nick – I’m cool with that! That would be gratifying. Jack – don’t worry its happening. Sam – we might not even get picked. Nicole or Jess might get it and then we’re f**ked. Nick – I think Nicole might use it on Kat. Jack – I could persuade Jess to use it. Sam – and then Kemi goes up? Jack – yeah. Sam – does Christie know I’m with you guys? Jack – yeah. Sam – we were in the kitchen and I asked her who she would pick for house guest choice.. I knew she would pick you .. I was just f**king with her. And I was like pick me, pick me, pick me. And she was like why .. do you want to play? And I was like yes! I want to win so we can do something crazy. And she was like oh would you vote with us? And I was like yeah! Why wouldn’t I?! I’m with you guys. It freaked me the F**K OUT! Jack – its nothing official. Nick – no one wants to put a label on it. Jack – obviously there are people that get along. Sam – if we were to get out 3 more.. Nick – I would rather have Jess out than Kat. I don’t think Kat will ever win anything. 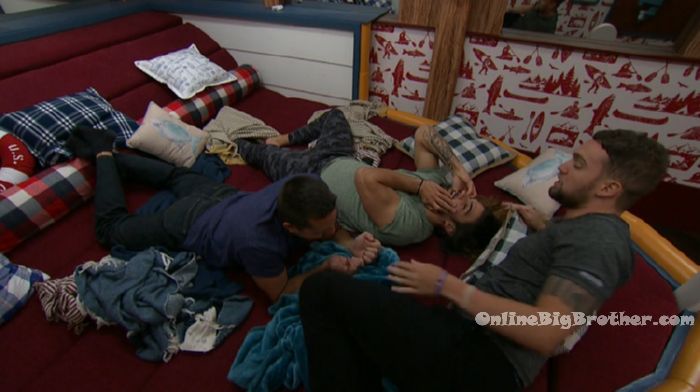 11:40pm – 11:50pm Bella and Kemi in the bedroom. Bella – I’m filing these for the veto just in case I need to cut a b***h! Kemi laughs. Bella – are you excited or what? Do you think you’re going to get picked? You don’t want to play for veto? Kemi – I don’t want the responsibility. Not only would I throw it .. I don’t want the initial conversation of so you still taking me down right?! Leave me alone! Bella – I do find it interesting that Kat doesn’t seem that upset and Cliff is just like so happy. Kemi – I just think its so funny that right after she (Kathryn) was confirmed up on the block she came to me about how she was upset about the other day and then immediately asked would you take me down. Like a little less transparent. Like even guys that get prostitutes like to be lied to a little. Bella – Kemi has been on all day!! I love it! I love it! I love it!

12:15am Big Brother blocks the feeds.
12:36am The live feeds return. They picked players for the veto competition.

All the house guests are in the living room. They’re hugging. Tommy – you guys are going to kill it. I’m going to make sure you guys have fun. Christie comments on how she knew she was picking Tommy (for house guest choice). 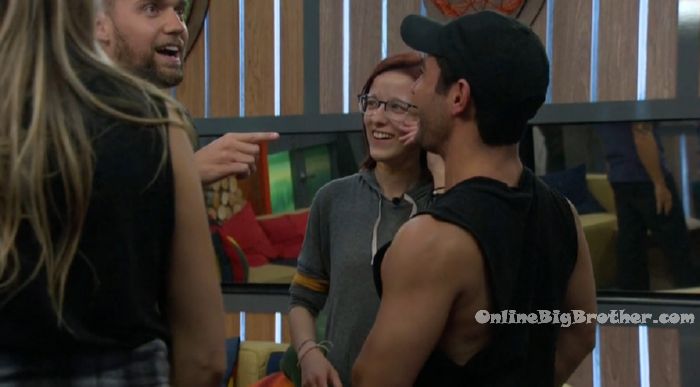 Storage room. Jackson, Holly and Kathryn. Kathryn – this just got really real. Holly – I know it was weird seeing you both up there. I don’t like this. Jackson – yup. Agreed! Are you okay? Kathryn – yeah, sometimes I just shut down. Kathryn – just go out there and win it for yourself. Make a statement. Kathryn – I know. Holly – you’re fine either way. Kathryn – am I getting.. Holy – paranoid ..yes. Are you getting backdoored .. no. Not by us. Jackson comments on how close Jack and Christie are. Kathryn – I think we need to worry about that but not till after this week. 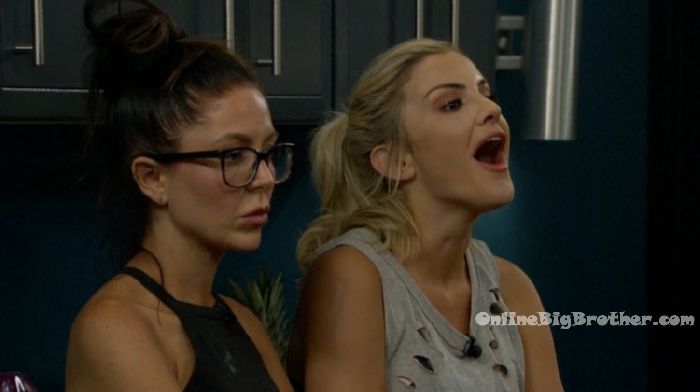 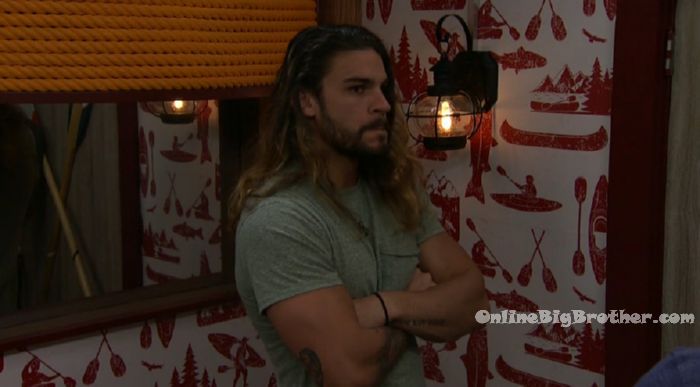 12:46am – 1am HOH room. Christie and Analyse. They celebrate on the veto picks. Christie – that was really good! I said she wasn’t getting picked. That worked out perfect. Christie – Cliff was up here and I was like is there anyone you would like to pick for House guest choice and he was like Jack. And I was like to be honest if I was to pick anyone I would pick Jack too. And I was like in the rare occasion where there were two house guest choices.. who would you pick second and who would you not want to pick? He was like I don’t care really who gets picked but I would not want Nicole to play because she would not take me off. So either way you’re getting changed. Analyse – who as ever done a backdoor on the first week!? Christie – I feel like its never happened. I don’t know, either way its really good. Its working out perfect. 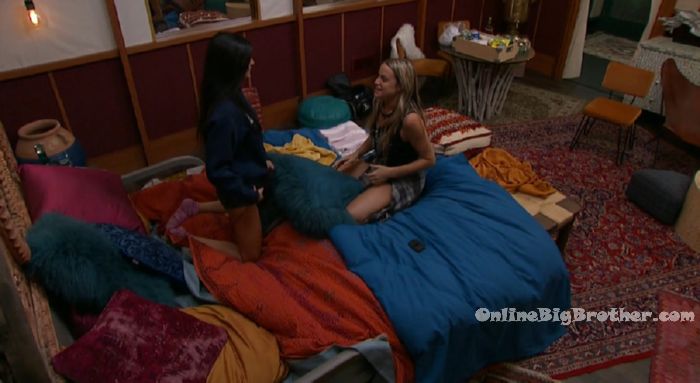 1:20am Boat room. Christie, Sam, Jackson, and Kathryn. Christie reassures Kathryn that she’s good. Kathryn – I wouldn’t trust anyone else with being in this position. Christie – you’re in good hands. Jackson – she (Kemi) dug her own grave. Christie – Ovi thinks that we have an unnamed alliance. He’s like we’re with the house right?! We’re good. I don’t even think he knows what the plan is… he just know that he is voting out who ever I say.

1:30am Boat room. Christie, Jackson, Kathryn and Jack.
Kathryn – I can’t wait to leave her (Kemi) a message. Because she came to me and said I have to vote with the house. I’ll be like sorry girl, I had to vote with the house. Christie – it was literally day two and she went up to Kat and said if you go up, I have to vote with the house. WHO DOES THAT!!? Kathryn – I can’t wait to vote her out of the house. Christie – there’s nothing wrong with her, shes a nice girl but she’s just a victim of playing too hard too fast. So you got to go. But then I’m a little nervous.. that Jess is going to think f**k I’m next week. Kat – this is going to be the most hardcore first week. I am honored to be apart of this plan. Christie – coming out hot week one guys. Coming out hot! Two shots! Jackson – A warning and a kill shot. One at the feet, one at the head. Christie – well I don’t like to kill anyone so two in the air. 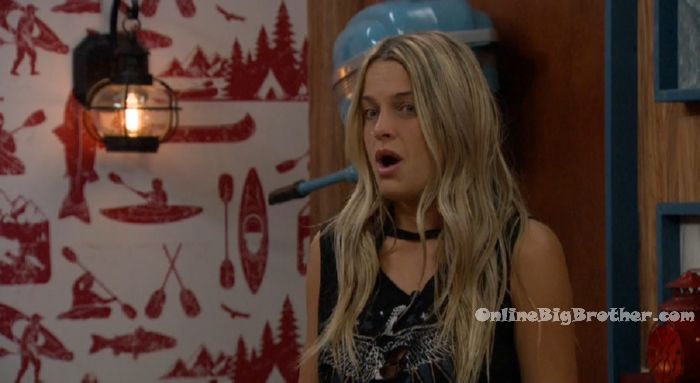 pair thoughts: may or may not be the case (impressions i got).
tommy/christie (episode but maybe maybe not is my feeling)
tommy/nick (in the thatkevinmartin and jonny or thatkevinmartin and william kind of way depending on which season).
jack/christie (the showmance that stopped the bromance of jacksonjack dead in it’s tracks with an assist by holly).
tommy/isabella (possibly forming)
isabella/holly (each seem intent on putting wedges between other people/groups so the rats possibly?)
sam/nick (why do i get the feeling nick is doing a case study?)
jackson/kathryn (oh you know she’s already planning the wedding… and he’s swivel head thinking about his next two showmance choices).
isabella/kemi (kemi. kemi. kemi. this is a one sided pair so quit naming all of isabella’s alliances without her name in there as people working together or rent a backhoe cus a shovel ain’t gonna do it).

side note: jackson clearly still has his shovel. he just told kathryn his showmance and holly his number (one as of earlier in feeds) that he really wanted to go to the end with jack and now he’s not too sure. cus that won’t get back to jack if he’s hoh next week, and it’s putting doubt about their place in holly and kathryn’s minds. or keep digging mr. never heard of internal monologue. and really. not everyone has immunity this week, so they need to secure a spot with the hoh until after the veto meeting. that’s big brother.

veto picks as far as i can tell:
nicole, jack, sam. with tommy hosting.

I’m so sad Kemi is getting backdoored. :'(

She must have really irritated the house by being a bitch because she isn’t a comp threat imo.

Christie said she was nice so that’s not the case.

another name
Reply to  King Silva

I’m glad Kemi is hopefully gone! She is a bitch and we don’t need another Bayleigh this year in my opinion.

She was ridiculous last year. The hubris of blaming one of her nominees for ruining her HOH was unbelievable. The worst part was she actually believed he was supposed to follow her instructions.