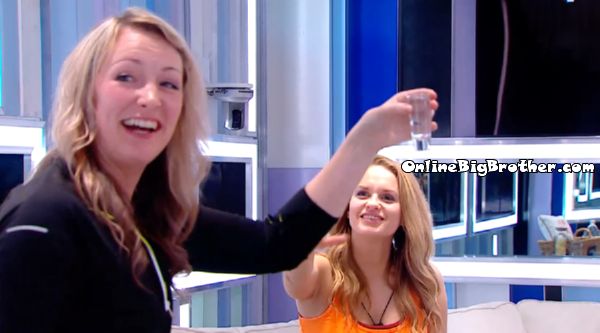 Jon has been telling everyone Adel has a giant pen1s. Sabrina and Rachelle are really acting this up and jkoking around with Adel. Adel gets embarrassed and jokingly tells Jon to stop. Sabrina says it’s a compliment 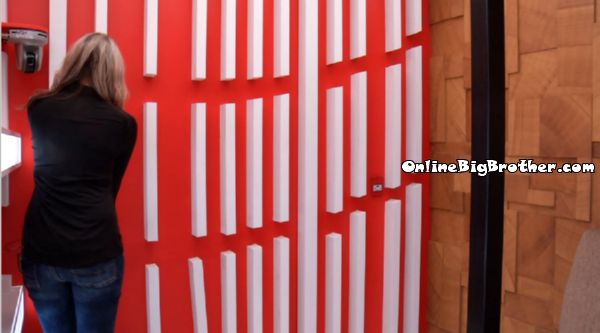 9:00pm Allison out of the secret room heads straight for the diary room

Image of Alliance entering the war room from the previous post. 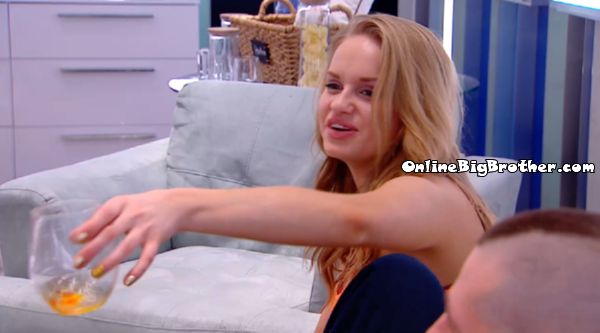 10:02pm Feeds back They were blocked for about 30 minutes 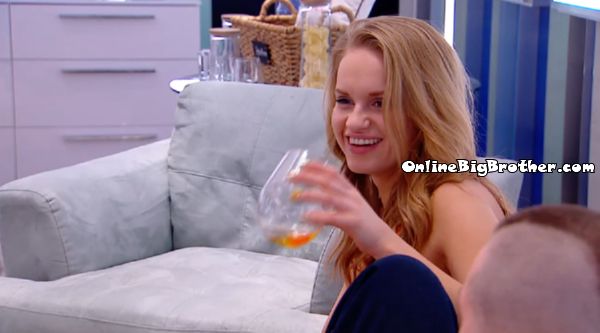 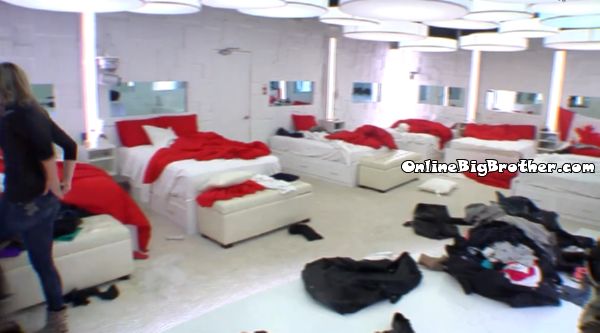 10:19pm Allison comes out of the Diary room. Jets to the bedroom and hides the veto in her bag. 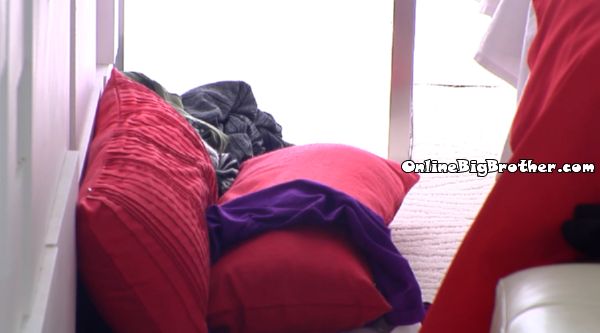 10:21pm Kenny asks her how she is doing. The Camera zooms in right where Allison hid her veto. Allison reply to Kenny – “Pretty shitty”

Kenny acting like Allison has nobody in the game and her only chance is him. He says he can’t promise her anything right now but after the nominations they can have a chat and figure out what they can do. Kenny feds her a bunch of BS

10:20pm After chatting with Kenny Allison heads upstairs to the HOH for some shots. 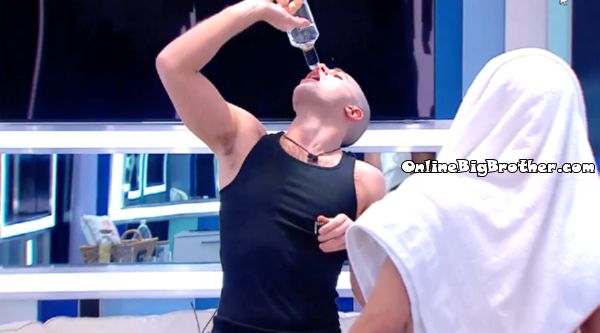 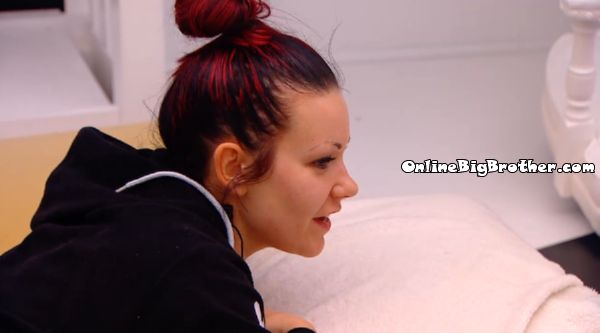 10:35pm Have Nots Sarah and Kenny
Sarah is certain she is going to be on the block.
Kenny calls Jon a “Big giant man child”
Kenny is also certain that Arlie will not flip on them. Sarah thinks Sabrina and Rachelle won’t either.

Could Alison put Kenny on the block with this veto?

I highly doubt it since he already has a veto and like in the situation in BB11 with the Coup De Tat, Jeff couldn’t nominate Kevin because he had the veto and was told that he couldn’t be nominated so… no.

Kenny is already on the block

They should call themselves the “Low Man Totem Pole” alliance.

My choice for an alliance name is Thunderdogs.

Fun fact, people that are lower on the actual (physical) totem pole are actually the more important people, with the least important being on the top.

i love how on the favourite houseguest poll andrew has more than rachelle and sabrina!!

Andrew probably came here and voted for himself.

They must have told Allison she didn’t straighten the #3 bar correctly since she came out and fixed it right away.

The more I see of Kenny, Sabrina, and Sarah the more I miss the stooges from last year. These people are just so draining! Even when the Stooges were bickering you knew it was more like a family and they would be back to goofing around soon. The light hearted people on this year’s cast are often overshadowed by the downers.

Oh yeah, Rachelle is a huge downer too. I forgot she was still there.

I REALLY need to get back to studying for my exam.

The truth is, this power is likely not going to change things much this week, as Allison will be safe anyway. We won’t even know the full extent of this power until Arisa tells us on Wednesday, as I doubt Allison will be explaining it to anyone.

I really should forget about the show until Heather makes her replacement nomination, and Wednesday’s episode, but I’m pretty hooked right now.

That’s too funny I watch the video feeds and make my comments (after watching each one) only to see Kenny tell Allison he doesn’t really see Allison as being low man on the totem pole how funny would it be for Allison to repeat this to the others and have them come up with the “low-man-totem-pole” alliance as a name for themselves too….lol

It was a blessing that we were able to intervene and get Allison back into this game. Andrew was ruining her game completely. Her game is turning around back to the way it was in the War Room,

Allison has the freedom to choose a side. I wonder was side she will choose. She can betray Arlie and tell Kenny about him and expose him.

Hey Name,, aren’t you tired of posting crap??? well the rest of Canada is, So what’s the friggin deal? are you a family member of SLOBRINA? if you are, seriously think about letting that broad know, that she’s a FAKE and a LIAR, please see to it that she gets the professional help she so desperately needs…

How was it that Allison got her STICKY hands on the super POV? and not anyone else?

So confusing… what are the conditions for this veto…?

I though the secret hidden veto was for the 2nd eviction on Thursday?? They won’t have a POV competition and reveal to the houseguests that Allison found the hidden POV during the week and after a commercial break Allison would start the POV ceremony. So basically, if she is safe the first eviction, she is definitely safe for the 2nd eviction.

Actually, it might just be a POV for whenever she wants to use it to take herself or someone else off the block?

That doesn’t make sense she found the veto now so if she wants she can take herself off the block it works the same as any pov it is only good once more then likely arrisa won’t tell the hgs that allison has it unless she uses it she probably has 2 or 3 weeks to use it but can only be used once so if she uses it to take herself off the block then she can’t use it for the second eviction. a regualr pov will also be played during the double the only thing i am not sure is if it is a regular pov which means she can safe only one person,or a diamond veto which means she can take off two people off the block and name there replacements.

Love how Jon said that he told his girlfriend he loved her first.

I can’t wait to find out the extent of her power!

May be allison automatically became Pov holder for next week. ( just because of double eviction next week)
But still wish Neda would have paid more attention to the flower :)

Oh ok
Thank you Hallie..I’m a BB virgin so not really know about the game :)

just watched the clip of Kenny talking to Ali, how rude is it to sit there and floss your teeth in the middle of a conversation. Where do these people learn their manners?

Really, it’s like B.B. found them in a cave in the deep woods, and thought, hey why don’t we put these animals on a TV game show, it should bring in good ratings,,,

I just want to thank DAWG and Simon for the Youtube videos of Allison finding the Diamond Power of Veto. We all appreciate all the work you guys do…

Is Heather bisexual? She seems to have a serious crush on Allison.

I can start watching BBCAN2 again.

FYI, I always root for the Master Strategists like Kenny every time.
Kennys strategy flaw is his social game, needs to be more friendly and hide his true intentions like what Heather is doing.

Can someone please tell me who Dawg is? :)

DAWG is intrepid and brilliant… were he to be on a future season of BB*CAN…
he’d easily outlast and outplay PETER of SHEYLD fame! He’s a BB natural!!!!
The downside is that poor SIMON would be totally burnt out & almost envious!
We know that DAWG has the instincts for the game even when it goes feline!
DAWG either wins the BB polls here in a big way or looses them in a big way!

Aw thank you .. I wish they would let me loose in the house! I’m resigned to the fact that the only way I will be at the top of the polls is if I get into the house.

Dawg, letz face it, you and Simon have looked at and commented on the way stupid moves
of a heck of a lot of BigBro episodes, that’s quite a mental library of what not to do in a bind!

Yes that is very true. I am always dumbfounded at a lot of the moves these house guests make. Its pretty insane how both Simon and I have watched more than 12 hours a day each of the live feeds every day for so many years.. The amount of information we know about Big Brother and from how different situations have played out is crazy.