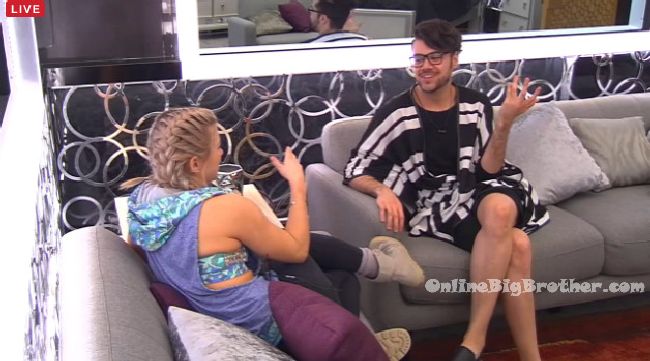 12:30pm HOH room – Raul tells Kelsey that he woke up to her and Jared moaning at each other. (They slept in the HOH bed together.) I was like what the heck is happening. I got up and ran out of the room. Kelsey asks what? What? No we weren’t??! Shut up! That is why I wanted you in the bed because I did not want anyone to think we were hooking up. Nothing happened. It was probably sleeping noises. Tim joins them. The conversation turns to Kelsey telling Tim about how Loveita wanted her out. I thought we had like a real human connection. If I would have won I never would have thought of putting her up. She then went around the house telling everyone I was the target and Paige was the pawn. She was telling me to campaign but I didn’t want to. Jared, Mitch, Phil and Cassandra join them. Kelsey continues to talk about her and Loveita’s rift. Jared says I even gave her the HOH last week. Tim says yeah I wondered how she won. Jared says there were four (Ramsey, Maddy, Loveita, Sharry) that voted against us so were going to put up two of them and if one comes down we have another replacement. Kelsey says our plan is to split up Sharry and Loveita.

Cassandra says she might throw the havenot competition to take one for the team and make the other side be on slop.


1pm Sharry asks Maddy and Loveita what we should do? Should we go tell them about our group? Loveita says yeah, I mean they already know. Nikki and Joel join them. Maddy leaves. Tim comes out of the HOH room and comments on how he got busted for bringing lolly’s into the house. He hid them in his hat and now has to bring them to the diary room. 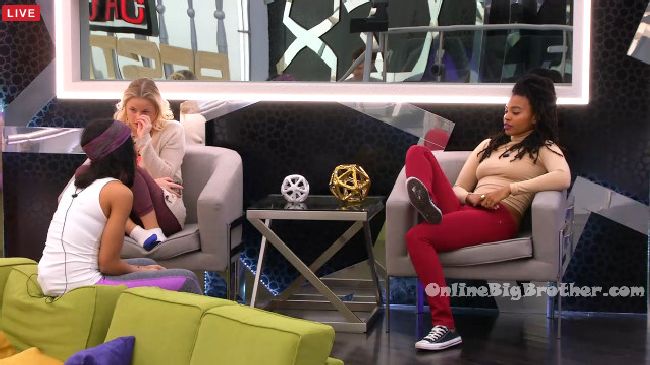 Bedroom – Sharry and Loveita fill Nikki in on the divide in the house telling her she needs to know because she’s going to need to vote. Sharry says what is hurting my game and her (Loveita’s) game is that people are being dishonest. 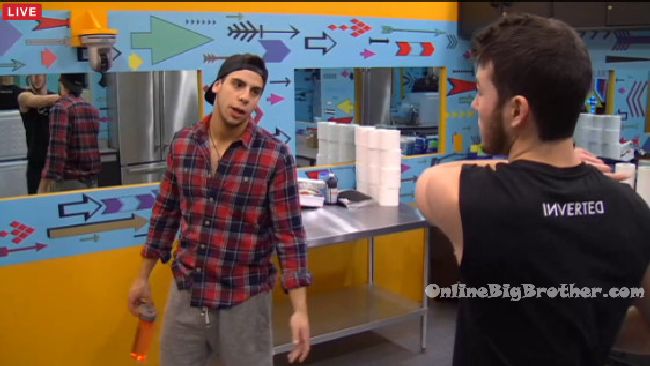 In the storage room – Nick tells Phil that Maddy told him, that it’s going around that they’re floaters. Phi says f**k that bitch! Phil tells Nick they’ll go together to talk to Jared. Phil tells Nick to not even talk to those girls any more (Maddy, Loveita, Sharry). I hate them. Nick says I’m going to switch beds and not sleep in Maddy’s bed any more. Phil says good the line is drawn. I want to try and start an alliance with Mitch and Jared.

2pm Bathroom – Christine, Tim and Nick are chatting. Christine tells Tim that there are two strong bullies in the house and I’m just waiting to see how long it takes you to figure it out.

Maddy seems to be this year’s nose picker.

I think she is just messing with her nose ring

Guy from Canada
Reply to  bb

Wasn’t that Andrews excuse from bbcan2?

Dawg
Reply to  Guy from Canada

LOL don’t remind me .. man that season was bad for that.

I was a Dallas fan until last night when I watched him pick his nose and wipe it on his underwear. Gross. He lost a few points on that one, lol.

I remember watching one season of BB Australia and it happened to be Tim’s season, pretty happy he made it on he’s a real interesting, funny, and nice guy. It almost makes me hope he wins…but I feel like I need to cheer for my Canadians!

More power to Tim if he could pull it off…so far im liking him for the win..
he called out the fake crying last night..
it was pathetic..Jared Hoh..,he knows that he woukd gain popularity with the females watching the show..crying reading mommie’s letter lol
if you dont think he has Canada’s Favourite Player in mind then ya’ll a tad slow…and then all the others crying?
Tim called it out!

Yep, remember watching it on the feeds from the camera behind Jared, Tim’s face was hilarious he and Nikki weren’t buying all the crying pretty funny stuff.

I’m very confused as to why almost the entire house hates Loveita, Sharry, Maddy and Ramsey…I’m almost sure whatever happened had a lot to do with why Paige left first…the show made it seemed like it was the brothers, but it probably wasn’t ….something probably happened in the first 6 days that made the whole house against Loveita’s side, so they didn’t do what she wanted…Paige didn’t seem to be surprised either which makes me think she knew the dynamics of the house… I’m betting big brother will probably not fill in the blanks…

From what I can tell the issue with Ramsey is that the group of Jared, Kelsey, Raul, etc would tell him one thing and he would immediatley go tell Loveita and co. So they knew they could not trust him or any of the others

You can tell from a conversation that Christine, Cassandra, Phil, and Raul (Big Brother Canada 4 – Jared is the Head of Household!) were having that Loveita, Sharry, and Maddy (in particular) had kind of isolated themselves during the first week. This rubbed the other HG the wrong way which seems to have added to why the house turned against the LSRDM alliance. Ramsey is kind of in a pinch because the other groups in the house thought he was with them, but he was really with LSRDM. Dallas is on people’s radar and then he isn’t and then he is again. It should be obvious it’s him and congrats to Cassandra for so quickly realizing that Ramsey and Dallas voted with Maddy and Sharry.

Simple stuff really. The hood rats went after Kelsey and as a result they didn’t get her evicted. The 4 claim people promised to evict like Joel then went back on her word. There not hood rats by the way. Haven’t come up with a name for this group. Maybe Minority Report as it looks like they are leaving one after another..

From what I could deduce, it seems Maddy liked Jared, but Jared ended up with Kelsey which pissed Maddy off. So Maddy basically got Loveita to nominate Kelsey and a pawn- in the hope of getting Kelsey out- which blew back on their faces.
Long story short- Loveita is cleary a newb and has no clue as to how the game is played. Kelsey is also a newb (as well as the other players) as they are all playing very emotional games.
By the way, has anyone noticed none of this year’s players are self professed ‘Super Fans?’. This means we will watch them make all the rookie mistakes possible (which should be fun to watch! lol)

I’m actually so happy with the lack of super fans… more drama!

It looked like Loveita and Sharry had already aligned and were talking in the pantry about breaking up the budding showmance, but also wanted to get rid of Cassandra at first. They decided to poll the houseguests during their audience in the hoh one at a time.
Because Loveita promised Jared immunity, she didn’t want to nominate him. That left Kelsey. The majority of the house voiced concerns about the showmance already starting.
Maddy already had stink eye for Kelsey over Jared. So she jumped in with both feet, bringing along Dallas. Ramsey already started bonding with Loveita, Sharry and Maddy. Cassandra, Mitch, Joel all agreed to vote out Kelsey. In their eyes at the time of nomination the vote was 7 to evict Kelsey.
Kelsey cried to Jared. Kelsey ended up pulling in Cassandra with Christine as her girl squad of three (the alpha, the beta, and the irrelvant one) with her repetitive cries of unfair victimization by Maddy, Loveita and Sharry. Kelsey and Christine made it known to Cassandra that the other girls didn’t like her. The brothers decided to keep the showmance to take the heat off them and because the lead brother decided he wanted Kelsey. they brought in Mitch and Joel.
Loveita and Sharry stupidly isolated themselves thinking the week was a fait accompli. Maddy joined them because the other girls were now the Kelsey squad. Kelsey had a better social network (the showmance guy bro bonding and the other girls crowning her their social queen) listening to her tell her story of woe in circles about how her bb experience has gone to hell because of the isolated three.
All the while Paige was being told she was safe. By everyone. Until the last day apparently.
If the episode mixed with the first litte while of feeds on each channel pieced together are to be believed, and i pieced them together correctly. I may have a couple of the details in the wrong ord from trying to make the multiple comments and conversations from different souces into a possible chain of events before feeds. :)

My mission this year is for Dawg to win a poll, and at this point in the game his is the only one I can vote for

I think it’s pathetic that every player from every season cries when some is reading a letter from home. They act like they are never going to see their loved ones ever again. Get over yourselves people!

Pumkin is the real MVP

I just read Christine and Tim in the same sentence and I got flashbacks to Chrustine and her husband who had to watch her cuddle with Cody all summer.

It was skerry. Just skerry.

Dawg, why isn’t Nick featured in the poll? I only see phillips name. Also why is Tim’s name in the photo collage of the players the only one with his name starting with a lower case letter?

Biam you have an eye for detail! Thanks for pointing that out. I’ve added Nick the poll (I made that poll before we knew he was in the house but he’s now on it.) As far as Tim with a lower case t .. I blame that on Simon :) We’ll fix that up later today.

are you serious lol???

For me, it’s always a little disarming to watch people flip their switches and start acting or speaking differently the moment they think one of the cameras is focused on them. A lot of the hg’s seem to go into poser mode and start checking their hair (and Maddy takes her finger out of her nose). The preening isn’t over-annoying, it’s expected. The change in voice and dialogue: the slipping into character is a little more disturbing to me. One minute Christine is a little bit rough around the edges, but not so bad. The moment she thinks she’s on cam it’s like she becomes Christine number 2: potty mouthed bitch-mode cowpie. To a lesser extent the brothers, Loveita and Cassandra (whose baseline personality is a little bit much to begin with) seem to alter as well, but it’s seems most evident with Christine. Hopefully this tones down or evens out a bit. Sure it’s somewhat funny in the I can’t believe she said that kind of way now, but I wonder how long before it stops being funny?