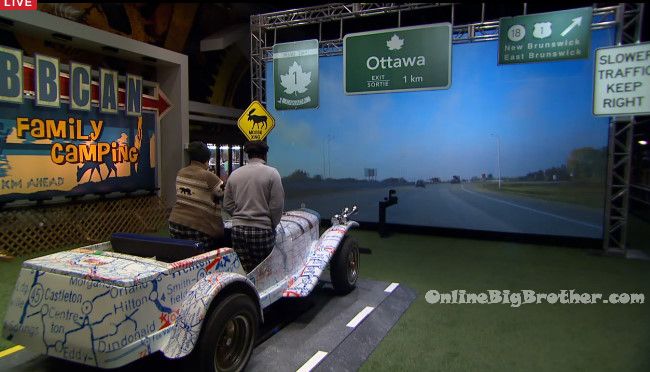 7:10am – 8:30am Big Brother blocks the feeds. When the live feeds return the car is fixed and Godfrey and Brittnee are working their shift driving the highway. Godfrey asks how long would it take to get from Toronto to Calgary? Like 4 hours? Brittnee asks what you think it takes 4 hours? It takes way more than that. She tells him it would take more than a day. All of a sudden on the screen it says Big Brother Canada After Dark. (I wonder if the house guests will “camp” out in the backyard and get to watch BBAD on the screen.)

9am – 9:15am Godfrey says oh I hope we get to see it! Big Brother blocks the feeds and when they return the after dark is gone off the screen. Godfrey & Brittnee talk about rats and mice getting into everything. Godfrey says you need a cat to get rid of them. Don’t buy one of those pu$$y a$$ cats. Get one from the streets YO! A fighter! Don’t tell them you’re going to get it to catch mice. They don’t like that. Tell them you’re going to domesticate it. 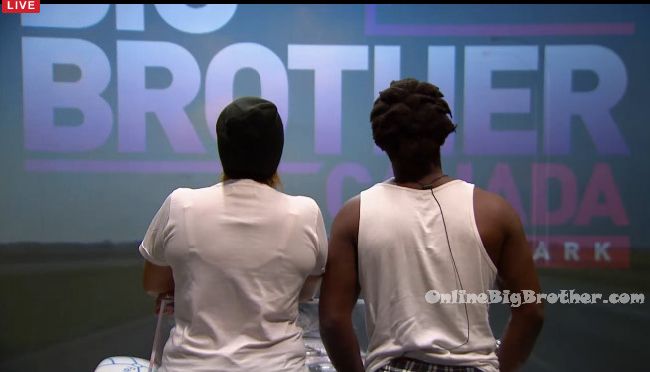 9:25am Sarah joins them. Brittnee says I am sorry about last night. I know Big Brother isn’t personal like that. SHe tells Godfrey that he really stepped up to the plate. Your a great guy! You’ve been stepping up to the plate a lot. Sarah heads back inside

The map pops up on the screen and Brittnee & Godfrey realize they’re in Regina. Sarah joins them again. Brittnee tells her that they legitimately changed the tire. Sarah asks what? Really? Okay. Brittnee tells Godfrey I didn’t come here to be a pawn. Because I’ve had unanimous votes every time thats great and make me “the perfect” pawn but I don’t want to be known for that. Godfrey says hopefully they put up those girls as a pawn. They have done nothing. Godfrey says its going to come down to back and forth, back and forth because now there are strong people on both sides. Britt says if I was supposed to open up to Willow I would have by now. Godfrey says no matter who goes home Willow would be happy. If I went home a part of you would be sad because what we have is real.

9:45am – 10:25am Pilar and Ashleigh take over for Godfrey and Brittnee. Ash tells Pili she is pumped and wants to win (HOH) so bad. Ash says as soon as Godfrey is gone we’ll need to decide who is better to get rid of Bobby or Bruno. I think B staying is better for us. This whole game has turned into a couples game. Not just showmances, everyone is a couple. Ash almost falls when she rubs her eyes. Ash says if we approach B and Sarah .. they have nothing and will grasp on to anything. If we’re going to have this conversation with B and Sarah we need to talk to them before the next HOH.


Out in the hot tub room – Sarah and Willow are talking. Sarah sasy


10:40am Out in the hot tub – Bruno tells Brittnee that she is obviously staying and going to be here next week. He tells her that he wants to work with her. Bruno says that Zach has to go up next week. Brittnee agrees. Zach joins them and the conversation ends.

10:45am – 11am Big Brother blocks the feeds. Bruno and Zach are talking in the hot tub. Zach says he just wants to get through this next week. Bruno says oh yeah you’re good. Zach wonders if Brittnee would come after him. Bruno says he doesn’t know. Kevin comes out and tells Zach & Bruno that a guy came out dressed in a cop outfit to give them a ticket for speeding. (The feeds were blocked during this)

In the backyard – Sarah and Willow make it to Winnipeg. Sarah “That’s the game though, who can give the best fellatio and to the most” Sarah says she knew these guys were f**king with her during the “Game set match” competition when she shot at Bruno and I looked over and saw Zach look at Bruno. Godfrey takes over Willow position so that she can pee. Sarah tells Godfrey that she is pumped up for Wednesday. Within our group lets you and me stay really close. Godfrey says Yeah I got you. Willow comes back. Godfrey says this is a good shift.. no snow, no getting pulled over, no sleeping outside. 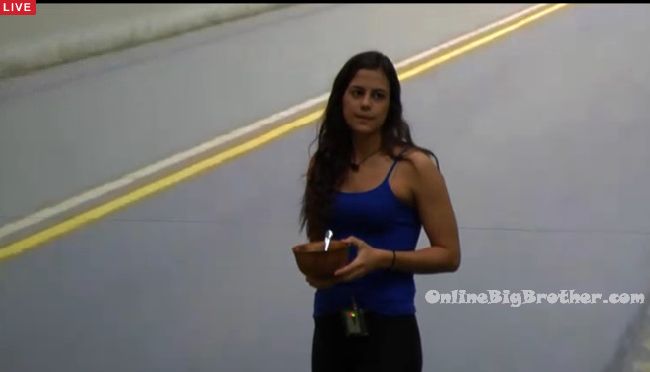 11:30am Bruno and Godfrey are in the bedroom. Bruno says that he already has his speech ready for Wednesday. Godfrey and Bruno say team “Black & Bru!” Godfrey says lets get these people out of here! Load em up in the wheel barrel!

It’s funny that Ashleigh thinks she and Pilar are going to reach out to Sarah and Britt, because “they have notthing and will grasp onto anything”. I hope I get to see Sarah’s reaction to that.

Ashleigh let Pili’s HOH get to her head. She thinks she runs the whole show and everyone will do whatever she/Zach want. They can’t see that literally everyone else is against them. I cannot wait until Zach and Ashleigh get targeted next week. Kevin too. I hate how Kevin took credit for Pili’s nominations in the DR. I was watching the live feeds and Pilar decided to nominate Sindy and Godfrey before that Kevin candy conversation even happened. I thought Kevin really liked Pilar (I mean, I think he does), so I was pretty shocked by the things he was saying in the DR about her. I thought they were Emmett and Jillian, but he made it sound like they were Mike Boogie and Erika :/

Keven may like Pillar. However, if Kevin respected Pillar he would have refused to read those lines in the DR, even if they were true.

Our Lord and Saviour

Props to Simon and Dawg for the new video format. And props to our lord and saviour Godfrey who is killing it lately!

God is the new fan fav and I would love B to wake up and start a showmance with him. Who cares if he works at McDonalds B – the guy has charisma and is like Prince Hakeem in Coming to America, an all around great guy!

Where does God work?
Reply to  Our Lord and Saviour

Didnt God make up some bs job and said he works for the IRS? The Injured Racoon Society? LOL

yeee been out to the Maritimes, and stuff??

The way Kevin is edited on the show baffles me, mastermind my ass

Willow might be the most emotionally unstable person I’ve ever seen. Sadly she’s going to have a really hard time after the show dealing with everything.

I just really want to see a Godfrey HOH, this guy is very entertaining and smart.

is there a Canada’s favourite player we can give Godfrey :)

I got frustrated and sent Big Brother an e-mail. Thought I’d share it. If you disagree, that’s cool. But, I wanted to share it here because the people here have been my favorite thing about this season so far.

“Big Brother is doing a GREAT job with this season. The twists are better than any season anywhere! Too bad they’re wasted on this group. It’s the worst casting for any BB ever. All this cast does is talk about past house guests, talk TO the cameras, break all the rules (and property), and DISRESPECT the game and the audience by purposely and BLATANTLY throwing competitions. They’re too scared to PLAY the game and make any moves.

You need to recast your casting director because the children they put in this house gets worse every year, some of them don’t even seem mentally stable. Why does the show have to be full of predominantly immature, young 20-somethings all the time? A token “old folk” isn’t good enough. It’s predictable. Get the old person out first. Try casting emotionally mature people just ONCE. People that aren’t IN the house for fame OUTSIDE the house. These immature, self-entitled brats don’t appreciate being in the house. They complain about everything. It’s like they’ve never seen the program and think it’s going to be Spring Break in Miami. When Big Brother has to interfere with the game, give the house guests lines and do some sketchy editing that doesn’t line up with what we see on the Live Feeds (which are down far too much this season), then you KNOW you have the wrong cast.

Lastly, there is a way that YOU, Big Brother, can improve yourself, too. Make Big Brother (the voice) more of a character on the show and Live Feeds. I know the UK and Aussie versions of BB are different formats, but at least their Big Brothers have PERSONALITY and are a character on the show. It enhances the experience for house guests AND the audience. Canadian Big Brother sounds like someone who hates their job and just wants it to be over. And, when the house guests break the rules, they actually get punished and it’s made to be part of the show, so the audience can enjoy it.

This season of Big Brother Canada, as phenomenal as the twists are, is a fail. The seasons keep getting worse. Don’t drop the ball and fall into the trap of complacency. Big Brother is a great show. But fan loyalty isn’t cheap or free. It’s earned and needs to be respected.”

Yes and No
Reply to  Fred

I find the cast is phenomenal! Ha. I know I will get thumbs down, but IMO, if they are going to cast all 20 somethings, its actually very diverse and outgoing group. (Aside from a couple of them, anyways). I would love if they could cast all 30 & 40 somethings; humbled people with things to lose and some experience of life behind them… but that wont happen.

I completely agree with this person … I also believe that if the casting had been better then some of the awesome twists would have been amazing to see and really spun the house in many fun and unpredictable directions. I would like to see a true cross section of Canadian peoples … all age groups, all nationalities. The self important 20-somethings need to be represented by one or two but where are the adults?

I looked at the 3 favs box today, and found it strange. I had seen a graph yesterday of d/r appearances weekly for the houseguests. the stacking on the favs almost matches the appearances (with 2 transpostitions for overall, but pretty much matches for the last week). are we subconsciously aware of the amount of time people are getting on episodes and translating it into favs? would explain the highest rate being kevin for so long, since he’s got the most d/r appearances for so little actual visible strategic plotting over all. yeah, i’m reaching. i’m just fascinated by how the favs box actually translates.

Does anyone know where to see Godfrey on Match Game. I would love to see it.

I want Godfrey to win HOH so bad because I can’t wait to hear his speech when he nominates Zach.