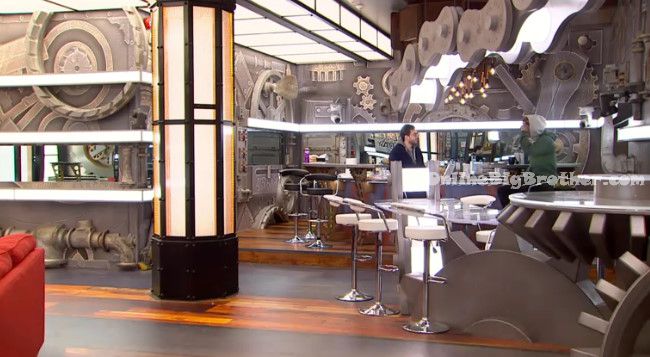 8:30am Big Brother wakes up the house guests. Jordan asks Zach so are you going to tell Godfrey before? Zach says yeah. Jordan says because he’ll be pretty pissed if he doesn’t know. So tell him and tell B before. Zach says yeah. Jordan heads back up stairs. Bobby joins Zach in the kitchen. They talk about how they can hear Big Brother building “something serious” in the backyard. They wonder if its for the veto competition or for a task.


In the bedroom – Kevin and Pilar are talking. Kevin says it was nice to finally cuddle in the same bed. Pilar agrees. She kisses him. Kevin asks her about her playing soccer. Zach and Jordan join them. They talk about about Bobby is isolated in this game. Even B, she hates him. I love Bruno but no one has the balls to put him up. Jordan asks if he’s told Godfrey yet. Zach goes to tell Godfrey. Zach tells Godfrey I am putting you and JP up on the block. Don’t worry you are both pawns. I am planning to b@ckdoor someone. Godfrey says in your speech say anything you want. Say dude you take naps. Zach says 100% the veto will be used. Godfrey says you’ve just got to make sure the veto is used. Zach tells Godfrey no one would vote him out. You’re playing flawlessly. Jordan joins them. Jordan asks if Zach told him he’s going up. Godfrey says yeah. Jordan says so you and I are going up. 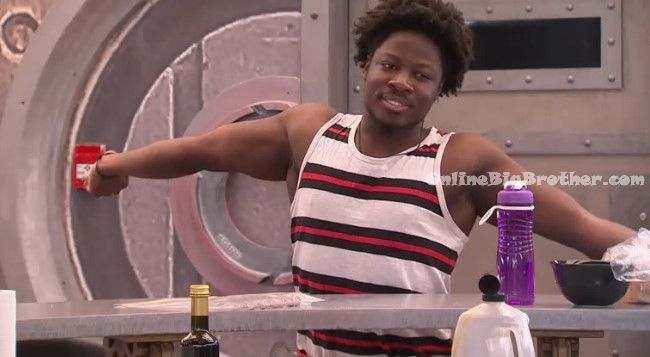 10am In the kitchen – Sarah goes to eat some slop and then drinks water. She starts choking. Godfrey says EWWW she just threw up! Sarah says no I didn’t. Godfrey leaves. Jordan says lets go to the havenot room and hangout today. Sarah says Everything you say is grosser than that! Di*ks! Yeah, no I don’t need any help or anything! 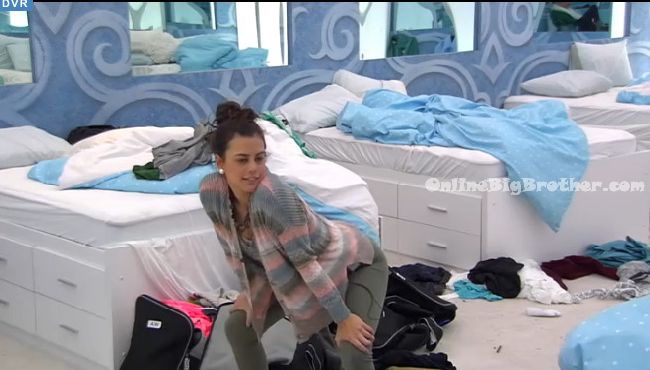 10:15am In the bathroom – Bruno asks Godfrey if he’s good. Godfrey says no man. I’m going up. Bruno asks what?! Godfrey says he’s putting me and JP up. He says the plan is to b@ckdoor Kevin. Bruno says you know we got you baby. They’re surprised Zach is putting up JP. 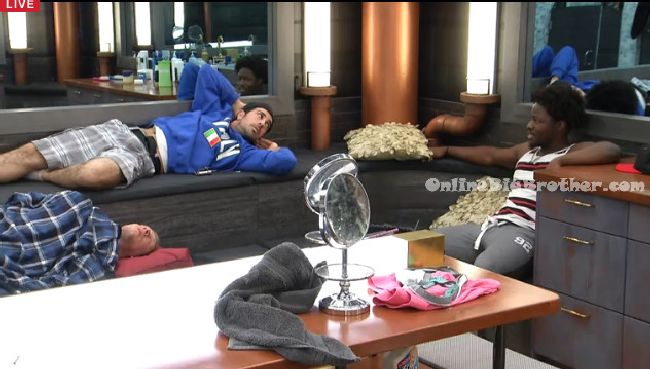 10:30am In the bedroom – Zach tells Willow that he is putting up God and JP. They high five. Zach says JP is safe he knows there is no situation that he goes home. Zach tells her Willow there’s going to come to a point where we need to form a crew. You’re my ride or die. I just need you to think about it. Zach says I don’t want to get down to 8 people and be in a situation where we are under matched. Bruno tells Godfrey if the noms stay the same I will put work in for you. The main plan is to get Kevin out.

In the havenot room – Bruno asks why the F**k would he put you and JP up dude?! Godfrey says I dont know. The plan is to b@ckdoor Kevin. Bruno says why not put up Sarah or B? Bruno tells Godfrey I’ve got you. Bruno says I though JP and Zach were close. Bruno says unless he’s doing that so you can win the veto against Kevin. Like its you against him, Zach against him, JP against him. But why JP unless its a mental comp.

10:55am Bruno, Willow and Bobby are talking in the bathroom. Willow says if guys keep putting up the weak girls it looks bad, you know. Willow says that Godfrey is a genius. If we get out of here and he isn’t I will buy everyone a round of drinks.

I seriously hope that Bruno wins the POV and takes God off the block, leaving JP and whoever they plan to “back door” as nominees. Then, I hope Sarah or someone flips and they somehow get JP out. I would love to see the look on his face since he’s such a cocky bastard.

Sarah wanted to flip… this would be the perfect time. If that happens, I might change my mind about the season

so what do I have to wish for now? Kevin wins POV and uses it on Godfrey?

The plan is bobby or bruno (the real one)…so if bobby wins and and take off godfrey…then bruno goes if bruno wins and takes godfrey …bobby goes…if no veto used…godfrey goes…all this is what they ideally want, but they dont know someone is about to come in…and so that could mess things up if say Graig comes back in and sides with bruno again or anyone…so that person could mess things Zach’s plan big time…of course they dont know, so they cant account for it…but it will mess up things…

I’m with everyone on the twists, they are all total duds. I understand they want to keep viewers involved so they want to give them the opportunity to vote on things that actually affect the show (rather than just what foods the have nots get to eat) but it just isn’t working. There doesn’t actually have to be a new twist every week, it just gets tedious and as a result those that just watch the episodes miss out on so much game talk with all the focus on the twists. It would be so much better to have 3-4 big twists throughout the season and otherwise just let them play big brother.
What I would love to see is a season where we get back to good old big brother screwing with the house guests. We get a big twist every 3-4 weeks and in between the viewers get to vote on a new way to screw with the houseguests that doesn’t actually do anything. Maybe a video that keeps them up all night that doesn’t actually have anything to do with the next comp, or the pictures in the backyard keep changing position for no reason. All the “superfans” would spend their weeks freaking out about the next twist, or they stay up all night trying to memorize some thing that is completely irrelevant, then just as they’ve decided that big brother is just screwing with them, a massive twist hits. “Expect the unexpected.” Isn’t that the whole point?!?
Anyway, thanks Simon and Dawg, I would probably lose my job trying to watch the feeds all day without you guys!

I would love to see Jordan/Zach get blindsided, but I’m not getting my hopes up yet. Someone is coming back in the house on Friday. My guess is that the returning houseguest is going to be the person that gets back-doored, unless they get a week of safety. Unfortunately…

I don’t think they’ll let the returning player back in before the POV ceremony is over.

Oh my god I hope that JP gets the boot it would be hilarious if he went out this week by the hands of his best buddy “Zach” I though he was suppose to be smart ? .. What an idiot never offer yourself up as a pawn remember what happened to Danielle ?

Jordan believes nobody is on to his alliances. he thinks he’s good with almost everyone in the house. he’s bragged about it for days if not longer. he thinks he has Bruno and godfrey snowed, that he has sarah on lock, and t/hat britt is afraid to make any big moves she’s just coasting / floating. he has walked around the house telling other people ‘rule number one don’t get comfortable/cocky’ (interchangeable to him), but has shown himself to be so megalomaniacally arrogant that he doesn’t need to take his own advice.
even though I’ve been playing the numbers game I still get stumped on willow being 60/40 (chop shop loyal but up Zach’s butt), and the fembots being 80/20 (want to make a big move but should we wait). it would make for good tv, but I don’t see how production could spin it to have everyone suddenly turn after denying the existence of any cracks in Newport’s “perfect game”. if the non feed viewers don’t even know about anybody being wise to the douchebags, how do they fix their revisionist edit to make the event plausible?
still only see the chances of Jordan actually going home as about 10-15%. let’s see what happens with the first five twist (how about a member of the OTHER first five… as much as she was hated beyond compare in Canadian bb history, if you want drama bring in Sabrina lmfao, i’m kidding).

Just a thought
What if Britt won the veto and b/c she senses how different the house has been she say “sorry I choose not to use it” Then when the panic ensues she goes to Bruno and tells him what Zach’s plan was. Bruno will sense how freaked out JP is at that moment which will help with the sell (as can Sarah) & obviously there will be copious back door bromuda meetings occurring as the boys flail to figure out their plan and bitch about Britt.

The key is Willow… is she with Chop Shop, Zach, JP, God, the Girls? It’s always seemed like she was with Chop Shop, but she also likes to play the middle. Enter Sarah who has been chumming up with Willow like no tomorrow. Has Sarah sensed the pivotal vote will come from Willow? I wonder now that I hear they saw someone was returning if Sarah could convince Willow to vote out JP/Kevin instead of Godrey so the girls would have buffers in front of them with the potential to pull in Naeha, Johnny or Sindy should they return.

I need to get caught up on the convo’s as I’m only on this page where the noms haven’t even happened yet. It feels like momentum might be about to shift, but I’m not going to bother getting excited for it given everything this season so far has been a let down or a dud.