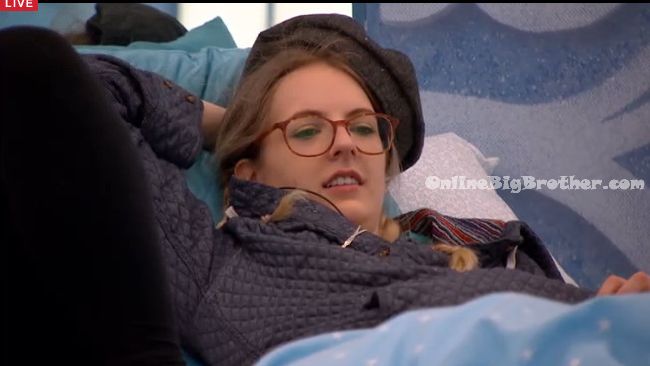 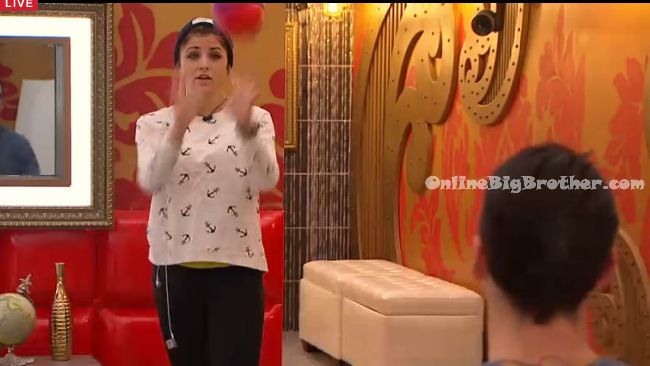 11am Up in the HOH room – Willow and Zach are tossing the football back and forth. Willow doesn’t catch it very well and asks “why am I mentally challenged?” They continue tossing the ball. Willow says if this is a Double Eviction coming up part of me doesn’t want to win it because then I wouldn’t get a letter. Zach tells her that he thinks in the past the winner of the Double still gets the HOH letter. 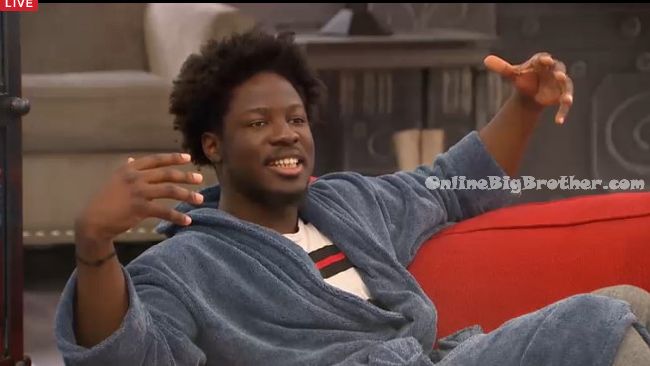 In the living room – Godfrey, Jordan, Sarah, Bruno and Brittnee are talking about past seasons of Big Brother and Survivor. They talk about how making a deal to spilt the prize money is against the rules. Brittnee says God thinks I’m afraid of the dark chocolate. Godfrey says you are. Brittnee says I’ve been with a dark chocolate man before. 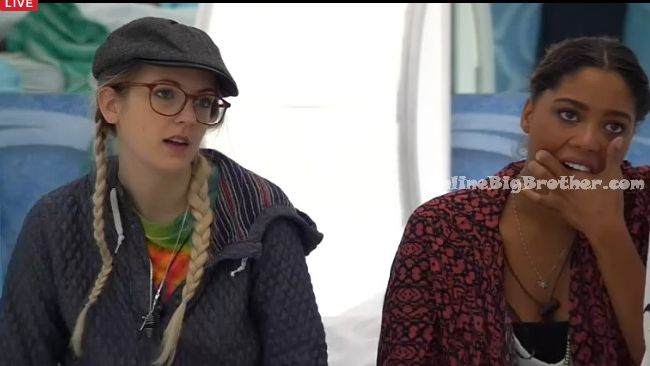 11:30am Willow and Sarah are in the bedroom talking. Willow says I don’t know if I can beat Pili. Sarah says she is strong. Willow says I need to win. I can’t be the one to make it to final 7 and not win anything. I need to win this veto. Willow tells Sarah that JP and Godfrey are going up on the block. Sarah says that’s smart of him. Everybody likes and trusts JP. Like there’s no way that can get twisted for him to go home. Sarah says this is a sign we can trust him. Willow tells Sarah that she trusts her. I think Ashleigh has our back. I think Pili has our back. Sarah says as long as we all stay close. Brittnee joins them. Willow changes the subject to talking about needing to study the past events of the house. Once Brittnee leaves. Zach joins them. Sarah comments how she should have won the HOH last night but Zach did. Willow says at least he looks good in a sweater. They talk about how the competition was a before / after comp. Zach comments that you could tell Pilar was just guessing. You could hear her going up and down those stairs. 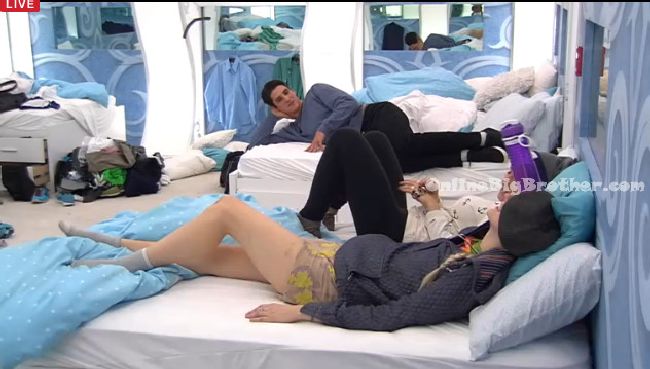 11:45am – 12:25pm In the living room – Kevin, Bruno, Bobby, Pilar, Godfrey and Jordan are talking. Kevin tells them about how he took a job planting trees to pay for student loans. He says one day he had to go pee but figured since it was raining so much he just went in his pants. He says he was soaking wet it didn’t matter any ways. They continue to talk about jobs and other random things. 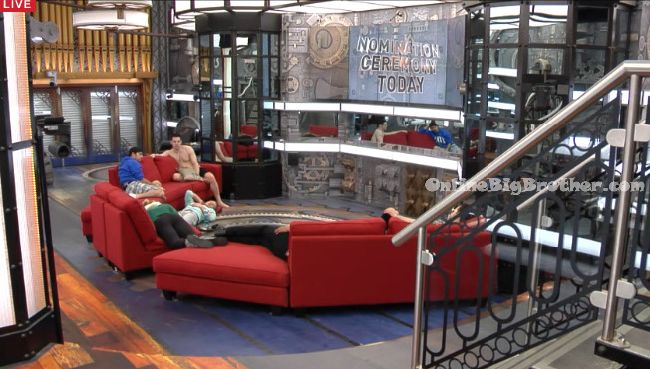 Godfrey talks about buying items on the black market to sell like rings and watches. Godfrey says he tells people the brand is “Emanuel Biscotti” (A name he made up) from the spring collection. The talk turns to Risha. Godfrey says people don’t normally get fake t!ts unless they’re in a certain industry. Either you’re a model, a p*rn star, an actress. Brittnee disagrees. Godfrey says I don’t buy that. Brittnee says some people get them because they’re smaller and insecure. Godfrey says I will put my slop on the line, Risha was a model. Godfery brings up how Risha said she was an extra on the show 4″Saved by the Bell”

Ugh, what happened to the gummy bear plan Sarah?!
I really hope she is just putting up a front right now and will actually take the opportunity to get JP out if he remains on the block.

Sarah will stick to the plan of backstabbing JP/Zach I’m almost sure of it. She’s one of the best gameplayers in there right now. She’s one of my favorites because of that. AND if Naeha or Johnny or maybe even Sindy come back than she would have them on her side.

It is far to early to enact the gummy bear plan, early in the sense that veto isn’t even played yet and she could find herself sitting in the chopping block once it is played and news reaches Zach’s ears that Sarah isn’t as loyal as the Bromudas think she is. Sarah had a conversation with the feeders/camera last night that she doesn’t trust the boys because JP and Zach were talking with Ash late night in the HOH yet they kept denying that they are working with her. Basically she knows what Newport is doing but has kept mum about it because she doesn’t have any kind of pull in the house right now.

It’s all about the timing, I just hope she doesn’t get Helened. What she is doing is actually good, she is gone from anyone’s radar and if she started a fire right this moment it could blow up right at her.

I hope that either Bobby or JP go home this week. Wouldn’t it be awesome to see such a blindside if JP stayed on the block, some people rallied to get him out, and voted him out? It would make GREAT Tv. Bobby going home this week would be ok with me only because I freakin hate him. HATE him. His demeanor rubs me the complete wrong way. It would be a fairly boring week if he DID go but I am ok with that at this point.

While I utterly agree that Bobby is a witless dolt, let’s refrain from using hate. That’s a strong word. It’s not like he punched your mother in the throat of something. He’s just clueless and kind of creepy in a stalker way.

On a side-note: What the hell was Bobby doing in the last POV? Does he think he’s the American Sniper or something? Boy chill.

Please let Sarah be joking! Now is the time to strike. If Zach was really willing to risk putting up Jordan, the rest of the house should use it as an opportunity to vote Jordan out. Sarah. Britt, Bobby, Bruno, and Willow could make a huge move. Five votes. That is all it would take at this point and the season could finally pick up. But I won’t hold my breath.

Sarah knows what’s up. I mean, she sat under the stairs last night waiting to see how long JP, Zach and Ash talked last night. And it wasn’t a short conversation. She just doesn’t trust anyone in the house, and she shouldn’t! If she said anything, it would go back to the boys and she would become target #1

I wouldn’t mind if Naeha came back into the game, but only because she would fearlessly go after the big targets. But, the reason I hope it’s NOT her is that she’ll go after the WRONG big targets. She wants the Bruno, Bobby and Godfrey team gone when I want her to go after Zach, JP, Kevin and Ashleigh.

ALL I want out of this game is for Zach and Jordan to be shot off their high horses. The way they talk about other people, especially Brittnee, is vicious. If Brittnee is “stupid” etc., for wanting to target Zach and JP, then why don’t Zach and JP think THEY’RE stupid for targeting others. I loathe hypocrisy and Zach and JP are the kings of it.

Bobby better do some fast talking in the safe house.

Fred, what is the safe house?