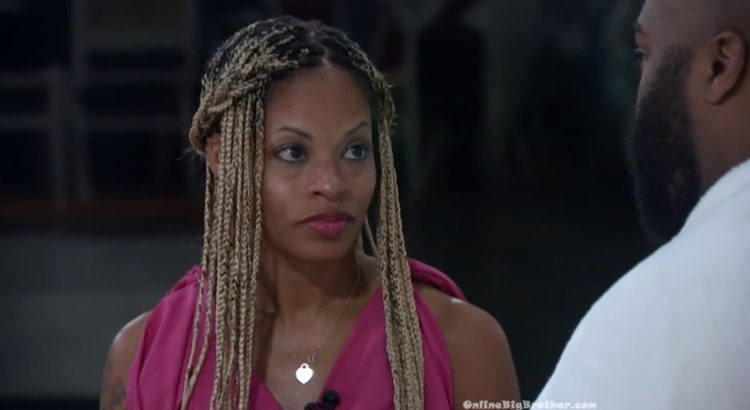 Sign up with Paramount+ and watch the Live Feeds! Try it FREE!

WILDCARD Winner: the winner will also be safe for the week (just the winner, not the winner’s team). With this reward there is risk. If the winning HG chooses to accept safety for the week, it will result in a punishment that may affect them, their team, or the entire house.

View the previous day ranks on the – Ranking Grid 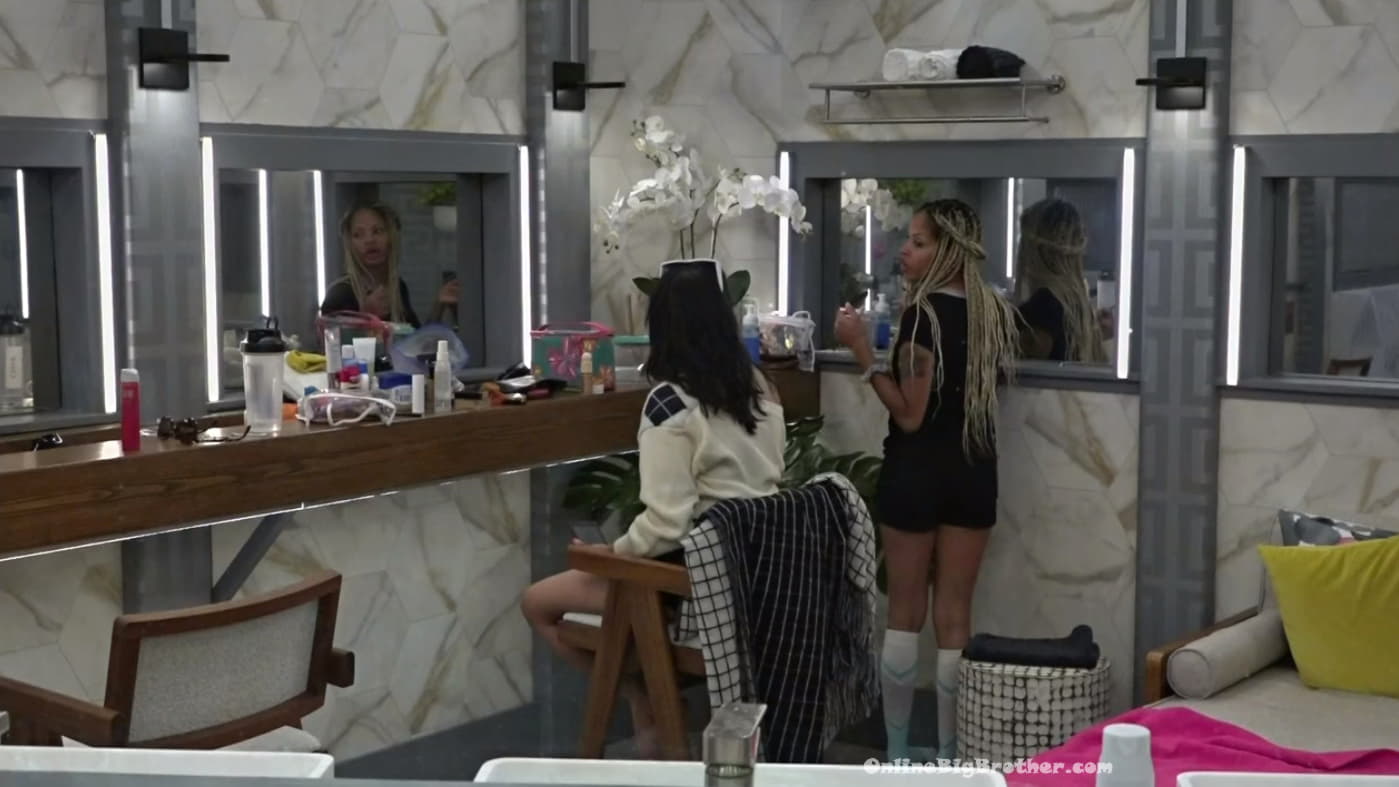 5:15 pm Hannah and Tiffany
Tiffany – if he ends up on the block next week he ends up on the block
Tiffany – I would love for him to stay cause I like him
Hannah – the only advantage I see of the French Kisses is I’m unsure about Claire and Sarah Beth. Those are the only two people in the house I haven’t talked game with. so I was like OKAY great.. plus you never want to turn down an alliance.
Tiff – You never say no.. I just feel like I entertained it the most so I put myself in the hot seat. He could throw me under there saying you were the one all down for it.
Tiff – you called me in the heat of the moment and I was just joking and playing sh1t I didn’t know you were for real
Hannah – no we got your back.

5:25 pm Tiffany and Sarah Beth
Tiffany says that Frenchie is scared of going on the block next week so he created an all-girls alliance so the girls won’t vote him out.
Tiffany – Frenchie you played the sh1t outta this game so you going up on the block I don’t know what will happen For real I don’t. I would love for him to stay at least a little longer but who knows what will happen next week.
SB – it kinda works out with me because with Hanna I didn’t know where she stood with me. Same thing AZah I never talked game with Azah.
Tiffany says Frenchie talked to Brit about the girl’s alliance
SB – so to bring her in too.. Ohh that’s messy Frenchie
Tiff – he talks so much he reminds me of Devin a little bit he’ll have an idea and the next thing you know we have 13 people in the damn alliance
SB – who would you put up if you win..
SB – DerekX said both my name and Claires last week..
Tiff – how do you feel about Brent
SB – I haven’t talked a lot of game with Brent he would be an option for me
Tiff – how about Whitney
SB – Whitney would be my other option
Tiff – those are my three.. I love Christian so he’s not on my radar at all
Sb – he’s on my team he shouldn’t be on your radar
SB adds that nobody on her team is going after Tiffany.
They continue to talk about how emotional Frenchie.
SB – I feel like he has an alliance with the guys too
Tiff says if she wins HOH SB and Claire knows who her targets are she’s not going to tell anyone else. (Whitney, Brent, DerekX) 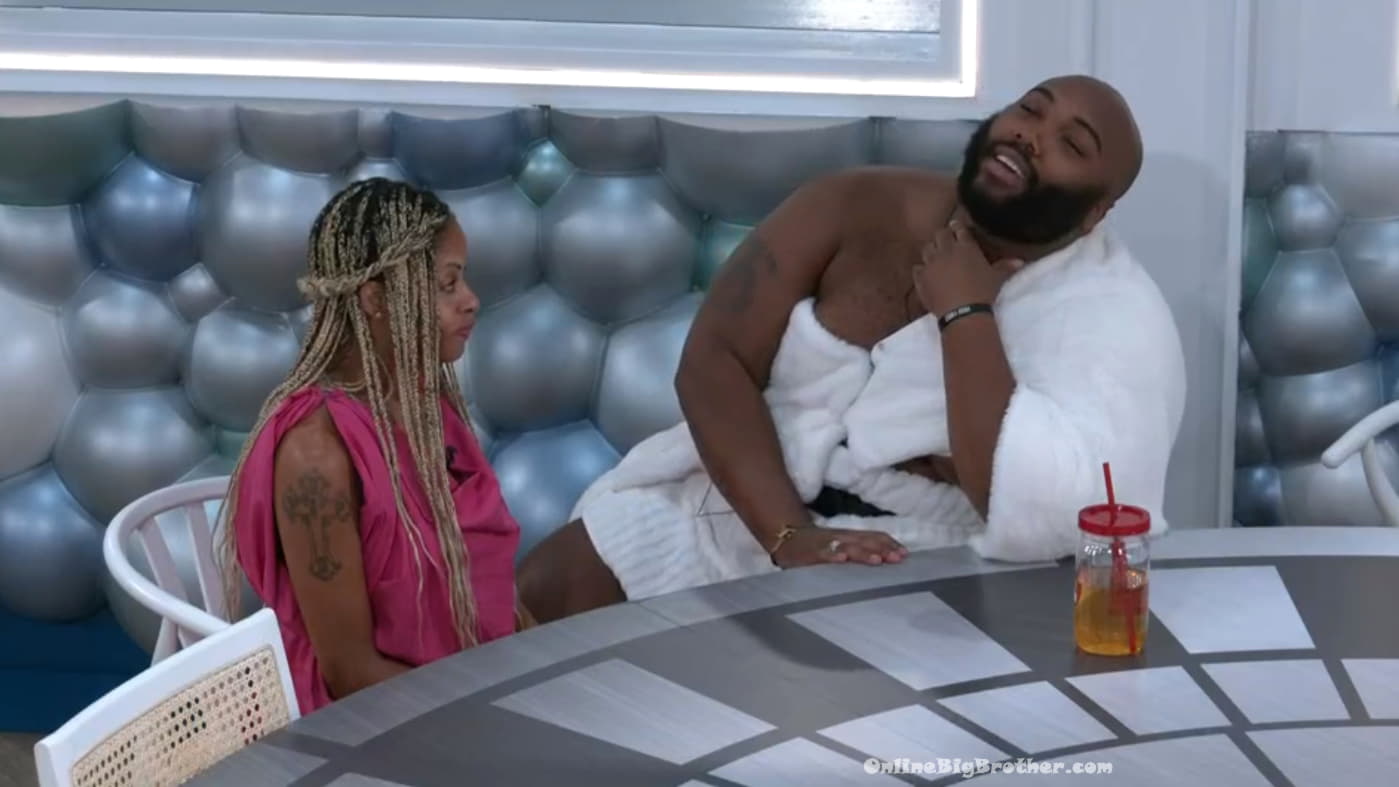 5:47 pm DerekF and Tiffany
Tiff – you know who he reminds me of.. Who do you think?
DerekF – I want to say Dick
Tiff – he reminds me of the player that played the worst game
DerekF the worst?
Tiff – mmmhhmmm
DerekF – Ohh David
Tiff – DEVIN season 16 when Derek won.. Cody? you remember the bomb squad?
DerekF – yea
Tiff – you remember how the bomb squad formed?
Tiff – you remember black guy Devin who was waking people up in the middle of the night I want to put you in it..
DerekF – ohh yeah he was the big muscle one.. his dumb ass
Tiff – Big goofy-ass mouth then feeling bad about sh1t crying about it then coming clean (forgot about the part where he also fell in love with the cougar of the season)
Tiff – all that emotions
Tiff says Frenchie will protect the two of them so she wants to keep him around.
DerekF – Frenchie is going to need somebody to check him
Tiff says to call him FRY
DerekF – Fry is going to need somebody to chek him and I feel I’m gonna have to and I can’t
Tiff says as soon as a man “POC checks somebody we angry black people so somebody else has to do it.. ”
DerekF – tonight by 10 o’clock I need to be in a bed.. (YUP same)
DerekF – I don’t need to be staying up .. The outside won’t be open.
They have a covid test later tonight then hoping they can sleep.
Tiffany – DerekX isn’t f***ing with nobody he’s like a little ant what’s the point of taking DerekX out.
DerekF says he would rather take out BRent than DerekX.
Tiffany – me to but shut the f** up and don’t say anything to FRY EVER period. Next thing you know we’re on the block because you love him so much.

Tiff – I would rather keep Fry over Brent. Brent plays a better game. Fry will be everybody’s target.
Tiff – I have DerekX wrapped around my finger low key. I feel somebody should win the game that knows the game.
DerekF says he really wants one of the girls to win (HOH)
DerekF – I’m either getting out DerekX or I’m getting out a girl
Tiffany – who would you want as a girl
DerekF – either Claire.. I know I’m sorry 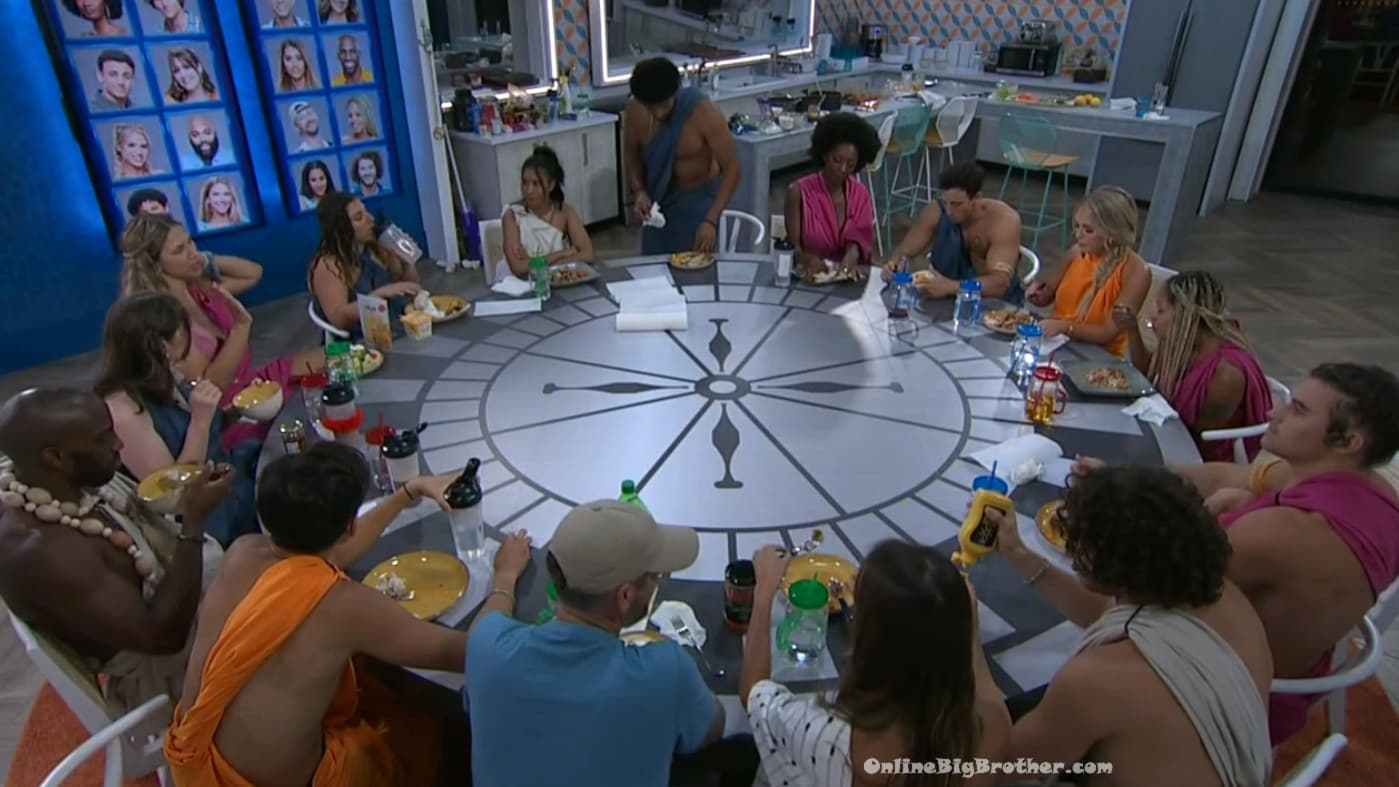 7:50pm – 8:15pm The live feeds return from being blocked. Big Brother is blocking the feeds a lot today. The house guests made a birthday cake for Kyland. 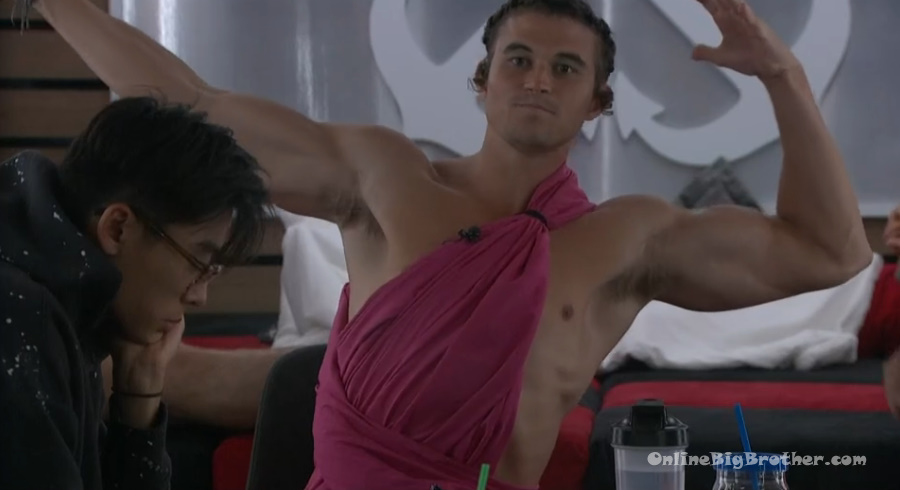 If you like these spoilers and read this blog regularly please consider a donation at some point. How to support OBB

Big D’s read on what’s happening in the house is BAD. His convo with Tiff was pretty telling – yes he can’t target GC b/c he’s on his team but the fact he says he would target DX & Claire over Brent right after Tiff points out how dangerous he is and that DX can be controlled should be sending up red flags for Tiff.

We know GC spouted about Big D being too negative & Brent said he was too popular. Maybe I’m wrong but I thought someone shared that intel with him no? If so, then WHY would he want to put up DX & Claire — that says he’s playing their game not his own.

He did say “sorry” but I doubt he would share his plan to put Claire up if he had even an iota of a clue that Tiff/Claire have a F2 (plus they’re both in the all female Sirens & Jackpot alliances). So good work Big D – you just moved up Claire’s boot list when you likely weren’t even on her short list.

Just goes to prove playing a good social game is about more than being popular – it’s also about being able to read the house – and Big D gets a poor mark in that regard.

Thankfully he won’t even try to win HOH so at least that’s a positive for Claire.

“DerekF says he would rather take out BRent than DerekX.”

so glad Frenchie didnt wear a toga…he knows how ugly is upper torso is. it looks like one big tattoo. A Big Green Blob