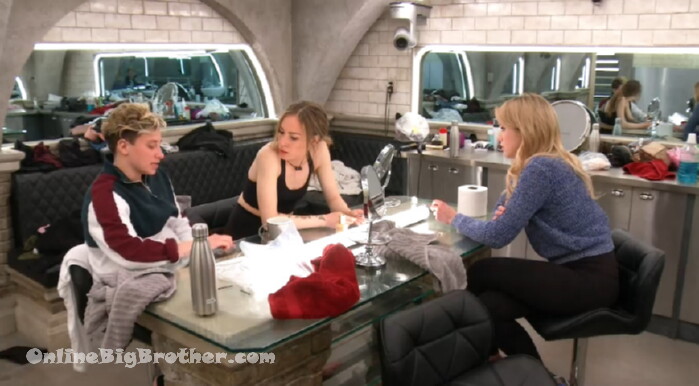 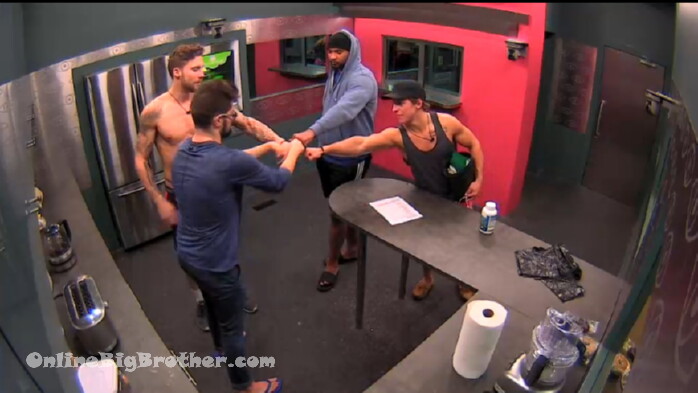 NOON .. Just in case you thought the pretty boys were too pretty for this show and were about to split up . nope.. final four.. final four.. 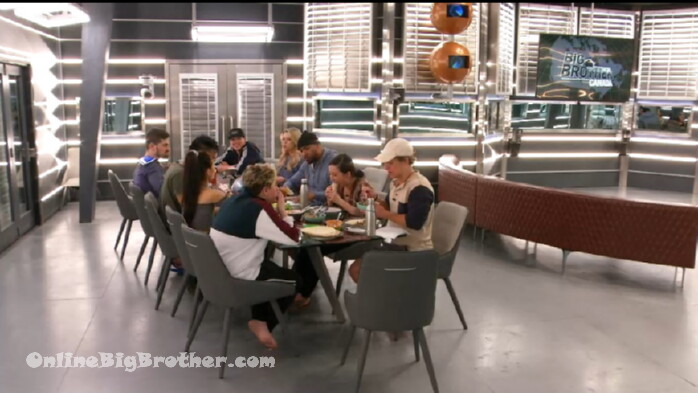 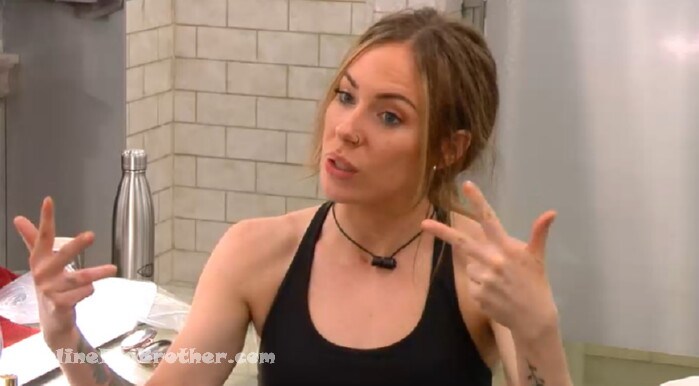 9:17pm Sam, Chelsea and Adam
Chelsea doesn’t think Cory is going to use the veto.

Sam – It’s a hard place for me because I’m a option if Cory uses it. I want you here but at the same time if you come down I go up.
Sam – so it’s like a weird space.. I planted stuff before hand so the target would go on kyra. Thats something I have toi live with if that person finds out. \
Chelsea feels like even if Kyra blows up she’s still the bigger target

Chelsea says her two options is to throw Kyra under the bus or campaign against “you guys”
Sam – a rock and a hard place ..
Sam and Chelsea say think Kyra might try and be a hero and make sure Chelsea stays. (WTF)
Adam brings up Kyra talking to Dane after the veto and came out of the HOH laughing.

They talk about the Veto competition and how poor Mark did.
Sam says Mark is a pussy.. they all laugh

9:26pm Sam, Kyra and Chelsea
Kyra mentions how close Chelsea and Sam were to winning the power of veto.
Sam – what’s your spin on it
Kyra doesn’t know …
Sam asks if Lyra told Damian about the guys alliance
Kyra has but he said he needs Adam as a shield.
Sam – he kinda told me that too
Kyra brings up talking to Dane where she suggested Cory uses the veto on her and Eddie goes up.
Kyra – out of pity Cory might take me down maybe
Sam – Cory’s not going to use it because it’s too early .. if I was Cory I wouldn’t use it
Chelsea – neither would I
Kyra – I Hate that she played so hard why couldn’t she let us f***ing win

Chelsea says Cory isn’t going to use the veto and “they’re going to get me out .. I’m not trying to say I am rolling over and dying i’m looking at this situation realistically
Sam – I appreciate that
Chelsea – you know it is what it is. It’s okay I got got. I came in here and I won an HOH and I pulled off a backdoor and I couldn’t win the veto.
Kyra says Dane is trying to keep the guys in front of him as shields . He wasn’t to them as numbers.
Kyra – I could still be going home there’s a chance people are trying to flip it.
Kyra mentions that Adam wants them to go home over Chelsea. 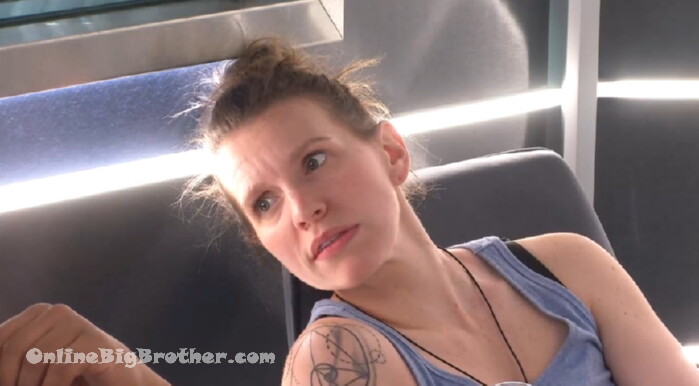 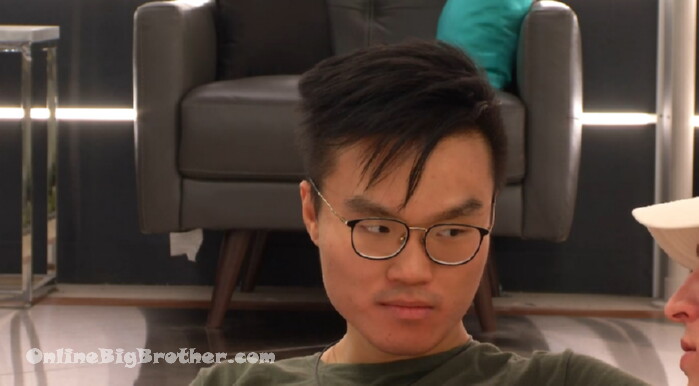 9:46pm Eddie and Dane
Small talk ..
Dane tells him to not get lonely and come hang out with him. Eddie mentions how he was one of the people that came to him day one. Eddie says that all his friends are leaving the game.
They chit chat about parents.. family etc.. 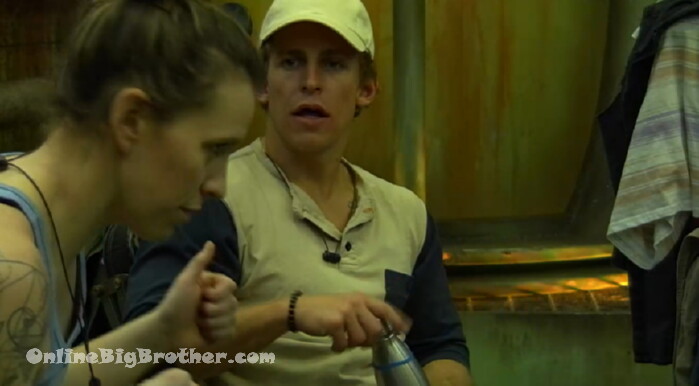 Cory tells Dane she’s not using the veto. She has a speech prepared for Kyra basically telling them they are not the target this week. As for Chelsea she’s going to use “Dane’s speech”

Some good clear game talk tonight before I had to go out. That quote from Kyra about Cory letting them win, love it! Entitled. If you want to win, earn it no one should give you a win and the reason I want her out. Mark and Anthony are playing smart games in the pretty boys, Dane and Adam are trying to beast competitions and putting targets in their back. Really hope Sam goes next week in the double, thanks for the updates Simon and Dawg.

y’know… house guests crying bully is almost a cliche. as far as i’ve seen, thus far nobody has actually been directly bullied. there’s been limited social shunning and self-shunning. there’s been smack talk. there’s even been minor social intimidation. there’s been some shaming, and an issue with consent acknowledgement. nothing has risen to the level of bullying yet.
yeah. anthony said tonight they’d bully eddie into doing what they wanted if eddie were to win an hoh.
he didn’t bully him. he said they would. anthony says a lot of things. he said he was going to yell at chelsea… he went up and hugged her.
uh… when has anthony manifested any of the big ego yap that he’s been spouting. that’s not his game. anthony gets other people to do the dirty work. he wouldn’t directly be involved. he’d get one of the others to do it. He’s a self aggrandizing egomaniac, he hasn’t actually crossed the line.
stay calm.

BBALIAS
Reply to  another name

I agree – If Anthony saw a mouse run in front of him in that house he would scream like a girl, and go jump into Cory’s arms asking her to kill it. Just to hide his freakout from HIS PB’s – Let the mice OUT !!!!