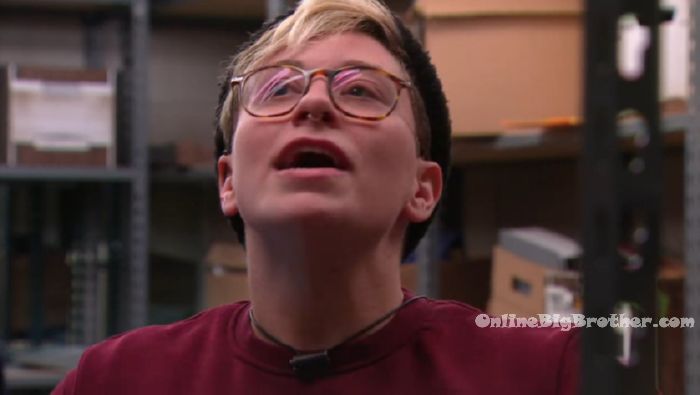 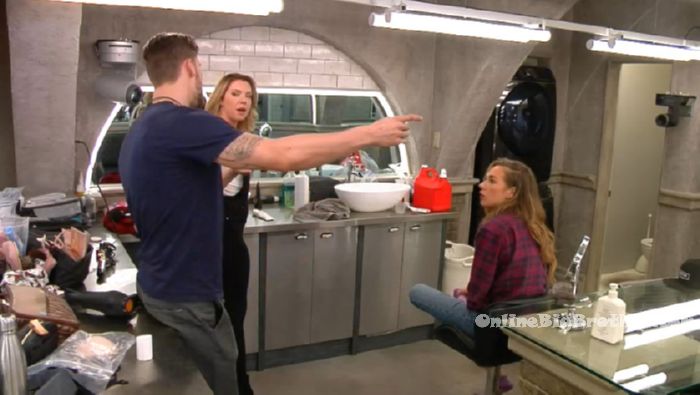 10pm Bathroom. Chelsea, Kyra and Sam. Kyra – he is saying that you did this and you did that .. but these are things that you didn’t do. Chelsea – everything is being twisted and twisted and twisted. Sam – lets just think for a little bit. Kyra – I’ve told everyone that I do feel betrayed in this game but she’s still my friend and that’s not going to change. So they think I’m sad because they think she used me. SO I am playing that but I still care about her. I am not going to f**king isolate you (Chelsea). I don’t f**king care. Chelsea goes to the washroom. Adam joins them. Kyra leaves. Adam to Sam – are they mad at me? Sam – we have to talk for a second. Just let me get more information first. Dane told Kyra a lot of things. Like Kyra thinks all the guys are working together and stuff. (No way .. the guys are too pretty to do that) I mean its clear that you guys are working together but there was no girl alliance and I mean that. There is legitimately no girl alliance. Not that I was a part of. So I think there’s allegations.. Chelsea joins them. Sam – I’m just telling him there is no girls alliance. Chelsea – its absolutely not true. Adam – he says that he walked in here and you were doing Eddie’s hair .. and Eddie said Oh I’m so glad we made a final two. Chelsea – we were joking! It was a joke! Adam – he brought it up to me. Chelsea – whatever .. its fine. I feel like everything is getting pinned on me and its not really fair. Chelsea – there is not girls alliance. We talked about having a girls night. Sam – you’ll (Chelsea) pull yourself off the block and he’ll put up Eddie. Chelsea – I don’t want to ..I don’t feel like I can trust anyone in this house. Chelsea starts crying – its okay I honestly don’t feel like I can trust anyone is this house. 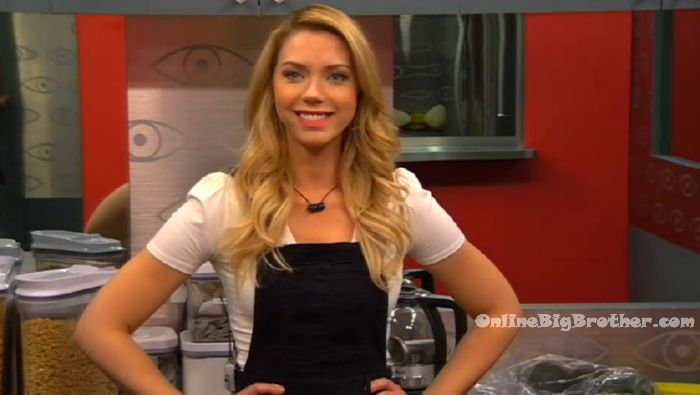 10:30pm Chelsea and Sam.
Sam – so I’m supposed to be upset right?! Chelsea – I guess so. The thing is .. maybe I’m stupid but.. I do think they’re working together (Dane and Adam) But I feel like its just .. I don’t feel like its .. I don’t think Adam is throwing us under the bus necessarily. I think Adam wants to keep us for awhile and then I do think we’re disposable to him. Sam – right. Everyone is in this game usually right? Sam – right. Chelsea – but I don’t know… I need to talk to him. Sam – I’m confused how I am supposed to act. Am I supposed to be mad at Adam or at Kyra. Chelsea – I think you just chill. I need to have a conversation with Adam. Sam – yeah, say like I don’t believe you were trying to throw me under the bus. I think you were just trying to find a balance on how to play this game. Chelsea – I think that is what he’s trying to do. Sam – Kyra is blowing up their own game. Chelsea – I know. I don’t know if I am happy about it or if I’m not. Sam – its not like its a blow to us. Chelsea – Last week I did what I had to do to scramble and make sure the target wasn’t on me and now this week Kyra .. let me just be the target. 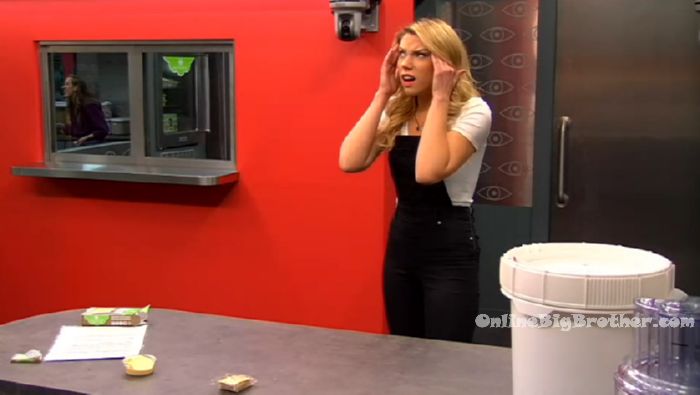 10:30pm File room. Kyra and Dane.
Kyra – I just want you to know that it wasn’t me bringing up these deals. Adam was. Kyra – Adam was the one bringing up theses deals. Who is the consistent member of all those groups. Adam! I was testing because I am tired of being talked to by a child and an alpha dog. So I tested him because I am tired of being talked to like a child. I don’t think that one person should run this game. If I have to call him, I will.

10:35pm Storage room. Chelsea and Adam. Chelsea – this whole idea about the 7 was never my idea, it was yours. Adam – I know. Chelsea – nothing even came from it. Its like its blowing up in my fave. Adam – I f**ked up. 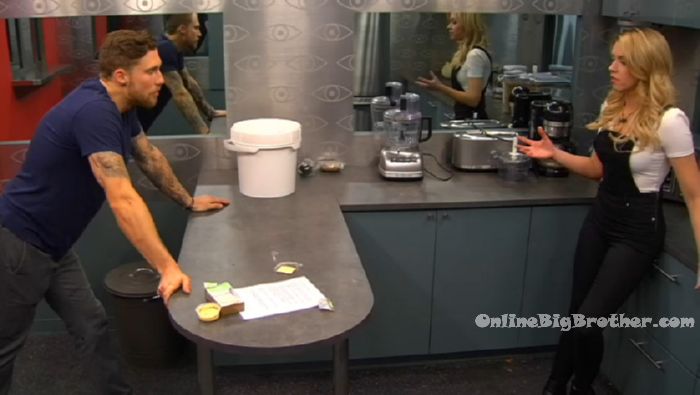 10:37pm Havenot room. Anthony and Dane.
Anthony – you know I’m locked and loaded. Dane – so first off, no one has any idea about the “Pretty Boy” alliance. Anthony – I know. So kyra just came up to em and said, sorry Adam. He did get caught. He is game. Anthony – he is not good with confrontation. Dane – he (Adma) is playing the middle. So he did just get caught. Dane – He is the Alpha male and the to girls just listen to him. We have to get Chelsea out. Anthony – Adam is very good looking .. but he is not the alpha. He is not the Alpha here. Dane laughs. And the thing is, they still have no idea (about the Pretty Boy alliance.)

Show your support by making a donation.

We truly appreciate any amount. All donations go toward paying the considerable costs associated with running this website. Thank you!

Ya Dane you’re the alpha………

Wasn’t Dane saying Adam is the alpha? And Anthony of course said he isn’t. Anthony believes himself to be. Sounds like some testosterone wars may be getting ready to start.

Back door Sam! Taking out Chelsea now is good, and then for the double Dane can set himself up well if he honours his word and keeps Sam safe..,,,,but I still want her gone. How do the houseguests know it’s a double? Did Arisa not turn off her mic at the end of the show?

another name
Reply to  Guy From Canada

last week (between friday and monday, noms were done but pov ceremony hadn’t happened) adam came out of d/r and was talking to kyra. there was immediately speculation (like an epiphany) that there would be a double in the coming week. The house has been going with that assumption ever since.

Hope Dane leaves next week . He seems like a Smug SOB

sounds like pov players are kyra, chelsea with sam, mark and cory.

did someone introduce aerosol kraken into the house after the veto?
oh… wait… it’s day 3 of a dane hoh, and adam worries one of his guaranteed jury votes is going home. of course everyone is headless chicken.

I know Mark isn’t everyone’s cup of tea – but the conversation between him & Kiki (primarily life related) was the most fascinating in house to date.

They have such an intriguing relationship where one day she abhors him & the next they are doing deep dives in vernacular, but the more time they spend together the more the relationship expands. it feels like verbal foreplay between them to me.