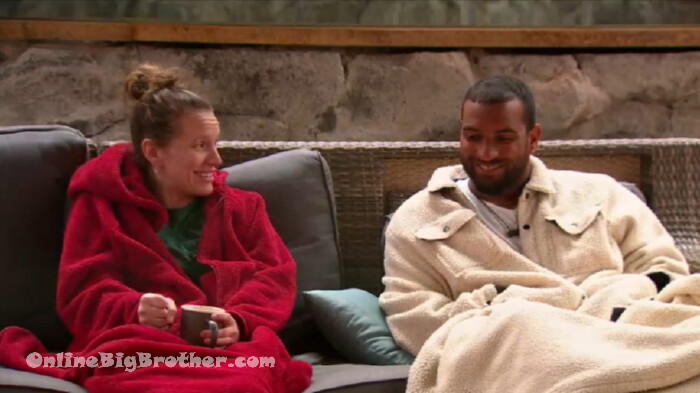 Big Brother Canada Spoilers – The live feeds were down for most of the day due to technical trouble. Sam is still going to be evicted. 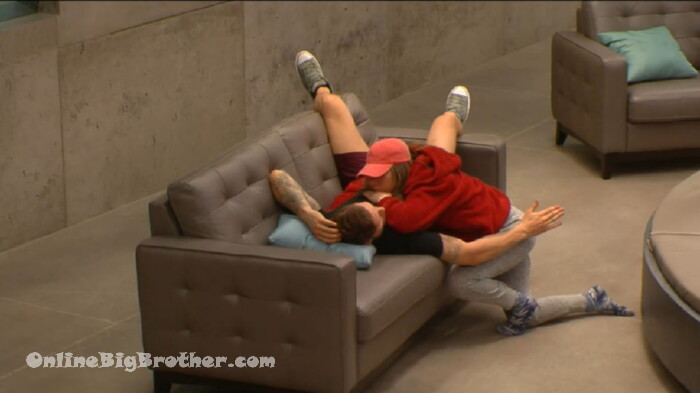 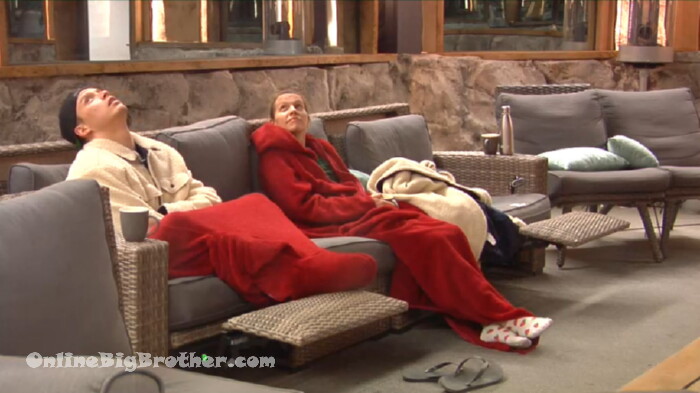 8:37pm Cory and Damien
Cory says she doesn’t think Sam is going to try to talk to me in case of a tie breaker
Damien – just enjoy your day finally
Cory – I’m just wondering if Adam will come to me and own up to everything because he hasn’t done that yet
Damien – let him keep digging himself
Anthony joins them. Goes on about Sam “grasping” Adam’s mind and taking control of his “entire game”
Anthony – she lied to a bunch of people and she was the leader of that group I think..
Cory – yeah
Cory – things didn’t make sense them doing the things they did
Damien – premature.. they got too excited..
Damien says it’s a pit fall for being a fan of the game.. you get too excited.
Cory says Damien and Anthony were two people she she told she wouldn’t put on the block nobody else.
Cory – well I told Adam and Sam I wouldn’t once dam dropped but that’s before I knew the sh1t . I made it under certain assumptions
Cory – when I tell someone (you aren’t going up) I make it under certain assumptions .

Damien leaves..
Anthony – keep in mind that Sam told everyone the three of us are working together It’s funny.. I can see why people would think that..
Cory – he follows us around
Cory – he knows that we have the goods and he wants in on it. He pretends he doesn’t want to know but he really wants to know.
Anthony – he never wants to say anything and that ain’t fair Damien
Cory – I know
Anthony – you could have been here you could have been on the iron throne with us
Cory mentions Este wanting a final 5 with Anthony, Cory, Dane, Damien and her. 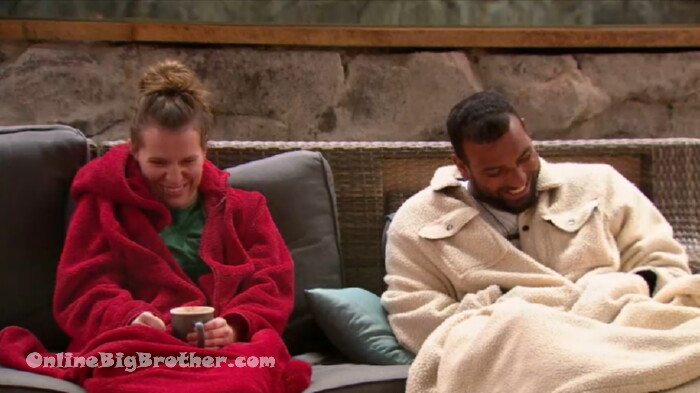 Anthony says it’s a shame Este won’t make it past next week… They laugh..
Cory says Anthony is bringing it out of her she’s had “Camera Time” where they said “Cory Kennedy that’s savage”
They laugh more…
Cory – I feel like we complement each other well (You’re Anthony’s puppet)
Anthony – great team 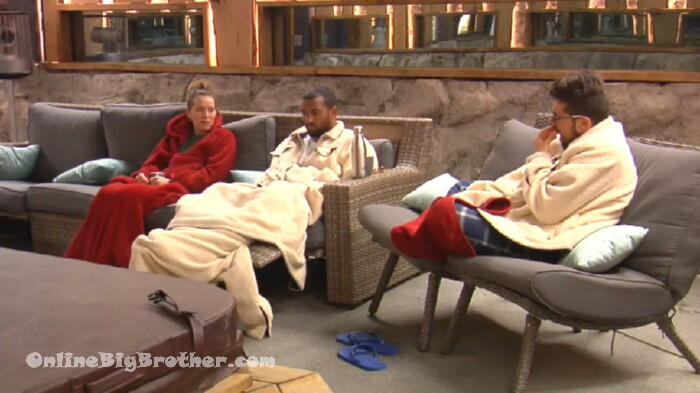 Mark joins them.. Anthony tells him how solid the three of them are. 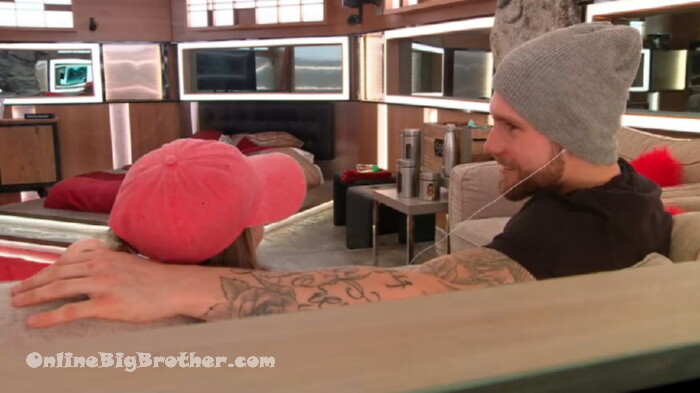 8:30pm Cory gave Adam and Sam the HOH room and a beer for a bit.

Anyone screaming for a twist right now. Anyone saying rewind week tape recorder:
Really? Now we WANT production to play the game for the players?
Remember seasons past where twists happened every two weeks? Remember the rigging outcries? Remember the “that winner should have an asterisk next to their name because production rigged it for them” controversies?
As a twists suck so let a player play advocate:
NO. Don’t dig everyone out of the hole they dug for themselves by playing poorly. Let them hang their heads in the shame they deserve.

karen
Reply to  another name

Join the discussion…I agree Cory is being stupid!! And yes, PLEASE bring on a twist and break these guys up!!! I can’t believe they are NOT that smart…Anthony is the only one that has any brains but not liking the way this is going down at all

Cory’s an idiot! She will live to regret that decision! Arrgghh this is going to be boring to watch, just a landslide for the PB now.

another name
Reply to  Kndpeanut

Sam’s decision last week was just as stupid. Sam even had the advanced knowledge of having overheard 2 pb conversations, and still decided a woman was her target. If her fairy god mother saved her: she’d still target Cory, not the pb’s. In terms of changing the game dynamic: Sam staying is irrelevant.

It’s always frustrating when a group lies to everyone and wins the game because of it. I don’t like seeing people dominate and win the entire season as it goes along. Very boring!!

Not a landslide if Damien wins next HoH……

Having the feeds on today, seeing Anthony and Adam argue…it was sad. The PB alliance is fractured, is crumbling, and won’t recover. Anthony has done some real leg work, Adam is the first to be cut from he PBs. Kyra is a goat for f5, Este is their back up for f5. Anthony wanted Cory, but dropped it because he wants the group first. Fact of the matter there is no group, Dane is in the middle of all alliances and needs to not win next week to play in the triple.

It was sad to watch the show tonight and see Sam melt down…but who calls a group meeting day of the veto meeting right before it happens! Production shenanigans?

Opinion with a bit of conjecture:
root of Anthony’s problem with Sam.
From the convo’s in week three and four we can pretty easily discern that Anthony wanted Damien to leave week one. He wanted Laura to stay. Adam and Sam were able to get the house on board with getting rid of Laura (who was openly targeting Sam). This is the issue. This is why Anthony has become the micromanaging behind the scenes dictator. He didn’t get his way week one. Adam showed more concern for Sam in week one than the wishes of Anthony.
We didn’t see this on feeds of course, but from Anthony’s retells of events to Cory as he was getting closer to her, this is the opinion i’ve had for a while.
MEANWHILE:
2am and everyone has been sent to bed. for quite some time.
except kyra. who is cruising the house muttering secret power.
unnannounced secret power? unvoted unnannounced secret power?
better be marsha the moose. like in the catacombs last season. for that dud twist they were pushing from promos until it was found.
anything else is an insult to viewers. kyra had a shot with a power. did nothing. two kicks at that can is a crap change of their own rules.