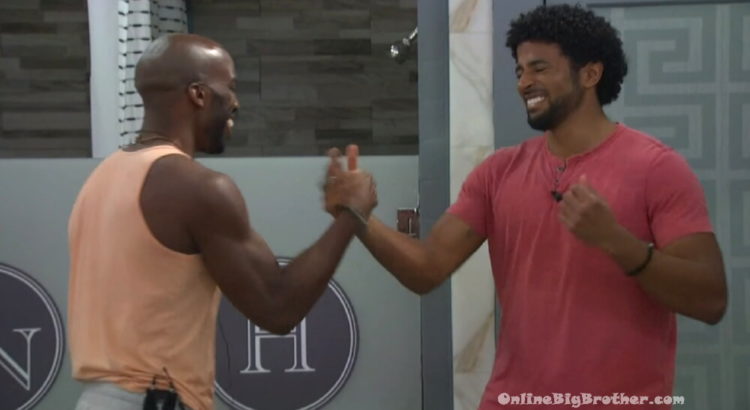 Big Brother Spoilers – Shocking they brought the feeds back. 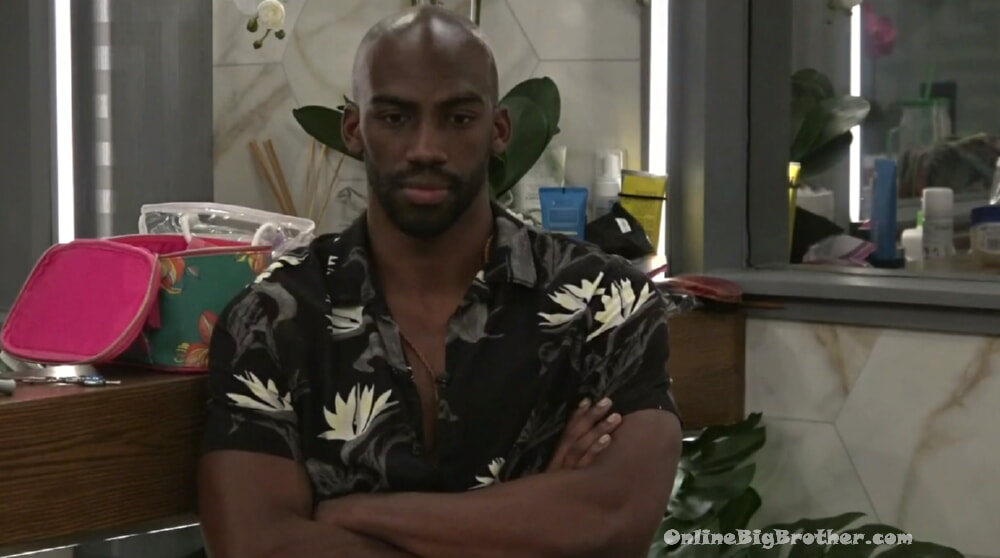 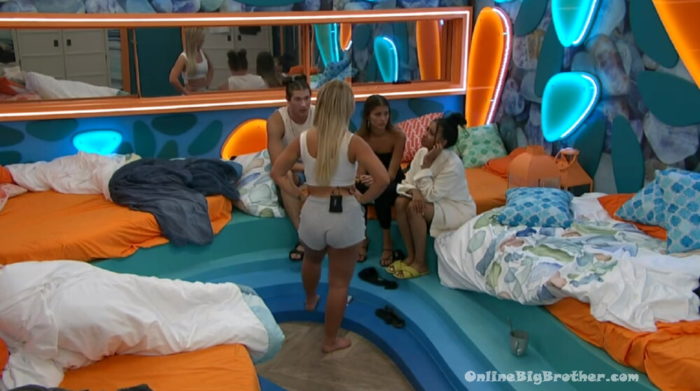 6:16 pm Bed Drama
Brent was picking a bed right beside Alyssa and Christian
Alyssa doesn’t want to be next to him. Says he should sleep in Frenchie’s bed 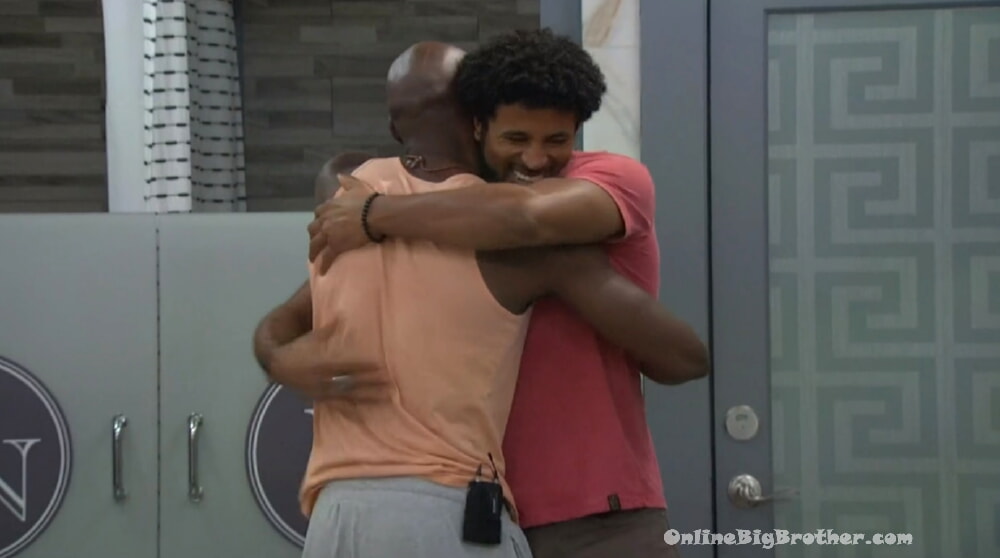 6:17 pm Xavier and Kyland
Kyland says he thought Hannah and DerekX might end up winning it.
Xavier asks when Kyland won did he do meetings right away or chill the first night.
Kyland – Chill the first night. I talked to Frenchie because he wanted to talk
Xavier – Right now I kinda wanna chill
Kyland says he told everyone lets chill and they were all cool with it.
Xavier – Chill..
Kyland – one week doesn’t make me an expert I just have what I have
Xavier – “back to back” 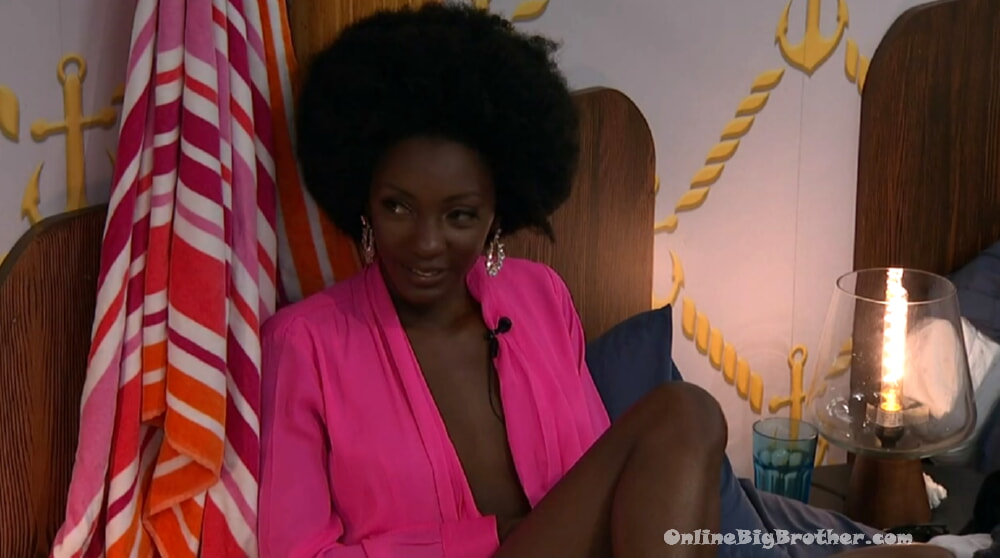 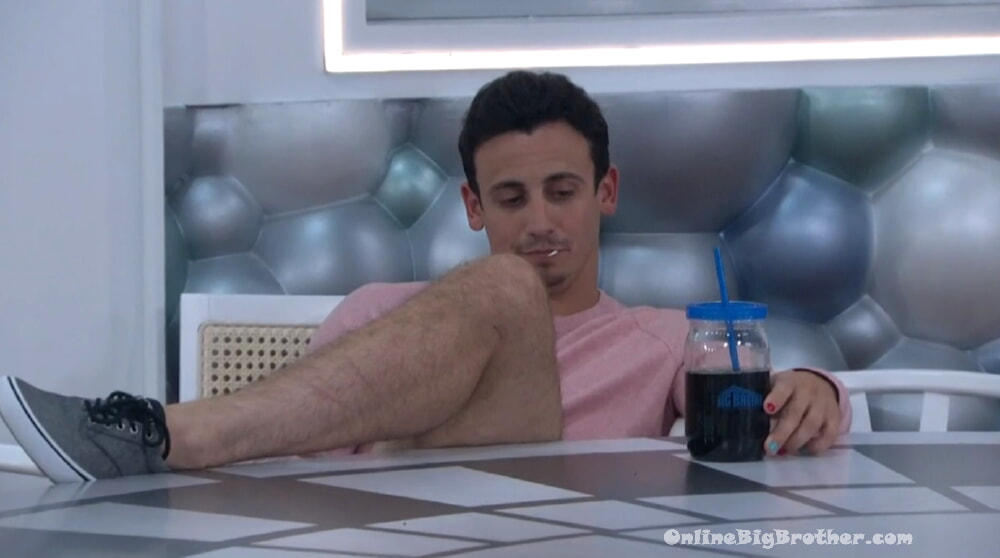 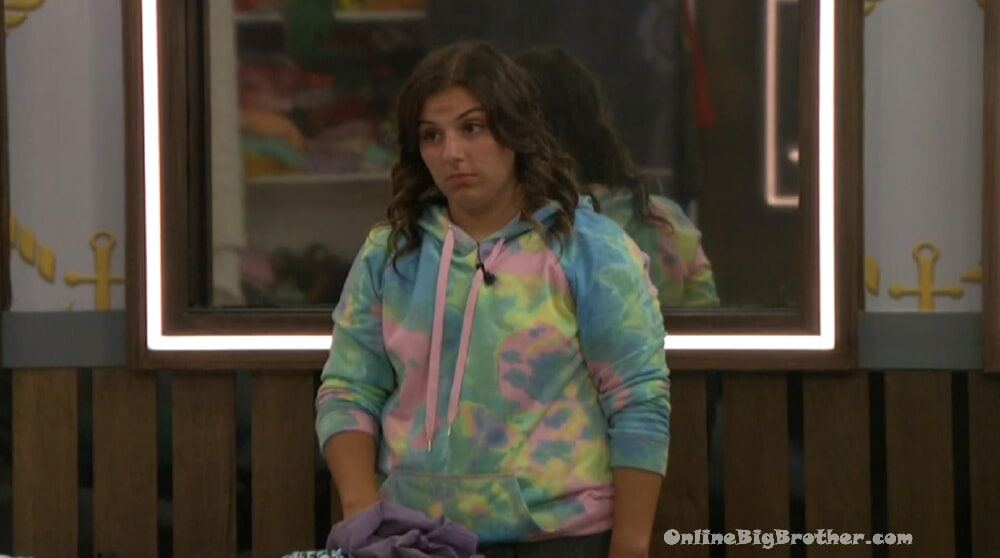 6:30 pm Azah and Brit
Brit says X is doing what benefits his team that is what I heard from Sarah Beth
Brit says from what Sarah Beth told her they are going for Brent and he can’t even play in the wildcard and save himself.
Brit – my only fear of this week from the veto and wins it who goes up?
Azah – I don’t know the logical thing would be to keep Whitney
Brit – I really hope I have nothing to worry about this week
Claire joins them.
Brit – who are you feeling
Claire – I’m feeling we shouldn’t be targets.. a pawn potential he holds his cards close
Brit says the perfect scenario is DerekX plays the wildcard and loses.
Claire – I heard DerekX’s team wants him to play in it.
Azah says if DerekX wins some power where it saves his entire team they would be in trouble.

6:45 pm Xavier, Alyssa and Christian
Chilling on the couch. Xavier says three of them on their team have won a competition now.
Xavier – tonight just chill.. I’ll probably will do one on ones but for the other meetings I want you in there as well.
Xavier plans to model his HOH after Kylands. Have structured team meetings and structured one on ones.
They go on about how awesome their team is at winning competitions. 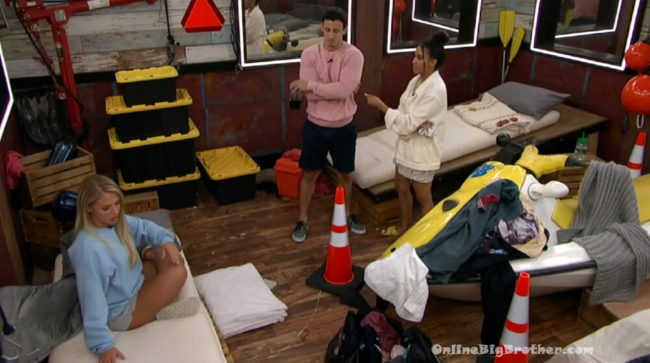 6:50 pm Brent, Hannah and Whtiney
Hannah says this is a good thing for them she doesn’t see them being put up.
Brent says they have an alliance together called the radicals
Brent – me and DerekX didn’t want to win it but I would have liked to make it to the second question
Brent says BIGD voted to keep Frenchie he can’t be trusted
Hannah says that was a sympathy vote
Brent – me and DerekX didn’t want to win it.. HAHAH
Brent – X’s team is going to be a target 9Next week) but we can protect them.
Brent – I’m going to lay low I think DerekX is going to lay low.
DerekX joins them and they have a team meeting.


7:00 pm DX and Hannah
They high five
Hannah – we could have kept going
DX – that was a easy comp. normally I’m not good at memory but that one was easy
Hannah – everyone was like that comp was so detailed
DX – now I know we can definitely win these comps. Brent got out first round HOLY Sh1t. This guy’s not winning any veto
They laugh
Subscribe

X won’t put up anyone from his team or the Cookout, so that narrows the potential noms down to Whit, Brent, Derek X, Brit, and Claire.

Cue Alyssa to up her flirting game with X. She just might keep Whit safe. Brent will go up for sure. Second nom? I predict Brit.

Actually the Royal Flush is a real alliance (Kings/Queens) plus Derek X & Hannah is an extension of The Cookout.

That means X has Brent, Whit, Britney — that’s it.

As for Alyssa she already stated she’d be okay with Whit leaving when they discussed last night.

However, there are some dynamics that can come into play:

1) Whitney, DX & Hannah met with Alyssa to tell her they’d throw HOH so someone could take out Brent.

3) Xavier told Ky he preferred Whitney to leave before Brent (but that was before Alyssa told him the things Brent was saying about her & X is the type of guy who really doesn’t like men who treat/speak poorly to women).

Much will become clearer this week especially if either of Whit or Brit win the WC and then whoever he nominates or Brent win the POV.

Brent will go up – that’s a given – the question is who sits beside him. It’s a slippery slope b/c Whit’s not going to think she’ll be a nom/pawn. Meanwhile Brit & Azah will likely snap if he puts up Brit again as a pawn.

He also can’t afford to throw up Claire b/c then Tiff/Ky/Claire won’t believe the Royal Flush is real BUT he also has to protect the Cookout & can’t afford to put Hannah up b/c she could then blow that up.

My guess is he chats with Whitney asking her to play along as the pawn & tell her he’s afraid Brit will explode if he puts her up again & this way they can play it like the house views them as a duo.

Bottom line X better hope DX or Claire wins the WC (whatever it is) so that Whit/Brit/Brent are all available to go up.

As predictable as the sun rising from the East

Next up Brent, then Christian, then Whitney, then Claire, then Britini, then Sarah, and finally BrentXfactor. After that, well, who knows as production will be confused as f……

You beat me to it. BigDaddyX is going to put up two people of “non color” (btw white is an actual color people) to keep the theme going. Don’t forget the multiple racial slurs Xavier made on the live feeds before production was able to divert.

Not upset, just quite bemused as you could see this coming from miles away.

It does feel a little South Africa’ie here in the US, where people of different races and skin pigmentation are being “taken care of” by, how do I state the truth without offending the perpetually offended. Difference is they make up only 13% of the pop here and being treated like they make up 80% like S. Africa.

So for clarity,do you think the majority of South Africans are white?

It’s quite ok if you are having a hard time keeping up, I don’t hold that against you dear.

No Name
Reply to  Miss Impression

Um, so what don’t you understand ? Seems pretty clear to persons who have average comprehension skills. If one chooses, they could duckduckgo SA demographics and would know that blacks make up around 80% of the population and we all know whats happened to the minority white population there in the past decade. Blacks make up only 13% of the US population but are seemingly being treated in the US as if they are 80% of the population. Does that explain it for you?

I have a question about Kyland. DerekF mentioned several times that he is interested in Ky but that KY is straight. But everyone has made a big deal in the media that he is pansexual. Did he not tell the houseguests?

I was used to being isolated even before the pandemic b/c I write about the NBA & therefore spend an inordinate amount of time in front of my laptop or watching film. But this past year plus has pushed things to the nth degree (for all of us) as we’ve all been locked away social distancing.

Perhaps that isolation has made me hyper sensitive as I’m feeling quite sentimental about this BB season. First, the new casting director is worth their weight in gold. Regardless if you like them or not every single hamster came to play this season. Even those easing into the game or flying under the radar are demonstrating their BB chops.

It’s been years since I’ve experienced such a strong reaction to more than a single player and this year I’m excited about several. From the start my gut reacted positively to Sarah Beth, Kyland, Tiffany & Azah. Flash forward and other than Brent & Big D I find them all likeable although I’m fondest of the Kings Team, SB, DX & Hannah.

Anyway, tonight on the TV episode I found myself welling up in the segment where SB was talking to Ky about her Dad passing due to COVID. I don’t know anyone who hasn’t lost someone due to this terrible virus (including me) and perhaps that was why my heart went out to her. But there was something else in that moment that struck me.

I was a huge Janelle & Kaysar fan and of all the relationships that have formed in the BB house over the year their platonic friendship remains my favorite. (Still ticked they got targeted & ousted pre-jury last year). I have the same feeling about SB & Ky (and pray he won’t toss her for the Cookout). They are my new young version of Janie & Kaysar and while they are both great BB game players it’s their friendship that resonates most with me.

I appreciate your insights and always look forward to reading your posts. I feel the same about Janelle & Kayser. I’m hopeful about this season but still keeping my fingers crossed.

So what. Big D voted to keep Frenchie KNOWING he was leaving. “Can’t be trusted”?? He threw his friend a worthless vote. I hate the argument against the sympathy/friend vote!! It is different than the rogue vote. Now, if he covers it up, that’s a different topic.

So another white houseguest will be leaving this week.

What’s the deal with Julie not shaking hands? Presumably, Frenchie and Julie are both vaccinated. Frenchie was then in sequester and tested every week. Julie has probably been tested. It’s ridiculous. I am so tired of these unnecessary precautions.

You can still get COVID after being vaccinated. It slows the virus but it’s not a cure. You can also still contract and spread COVID if you have gotten the vaccine as well

I understand that. But these people have been isolated and tested repeatedly. They do not have Covid. I’m tired of the theatrics.

Julie could contaminate the house not the other way round. It’s just a precautionary measure. Could you imagine if that happened and shut down the show? Talk about theatrics!!