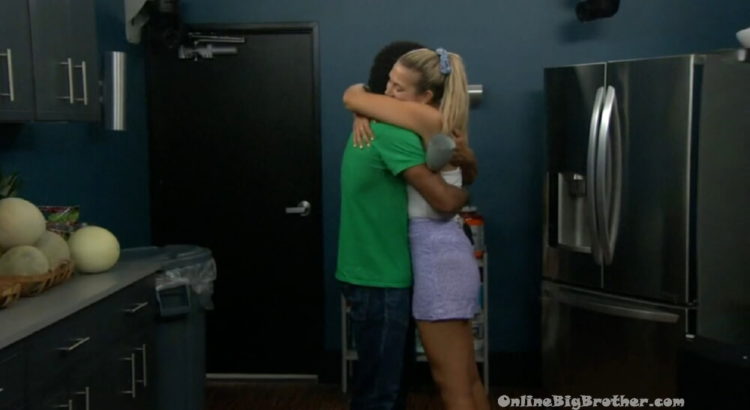 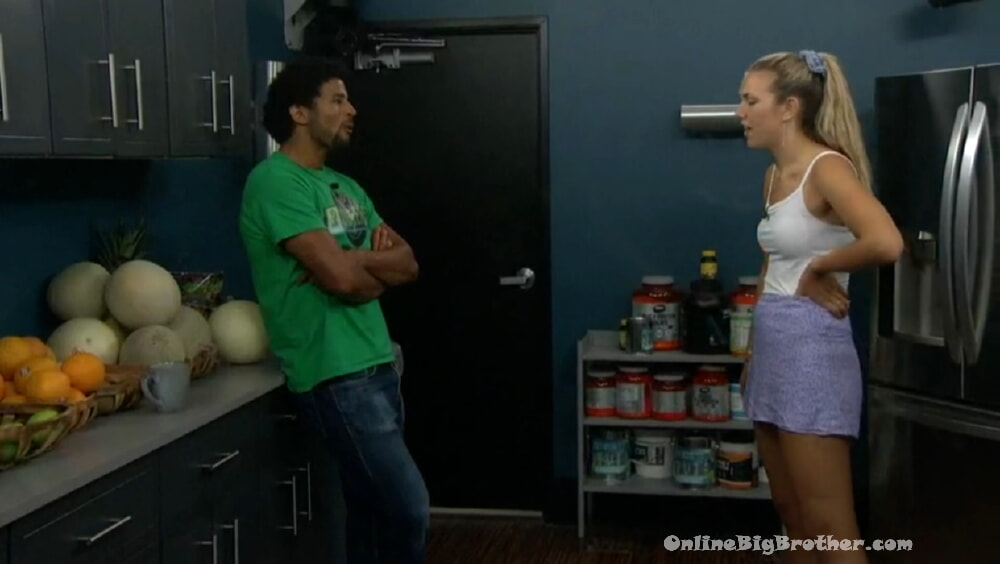 12:55 pm Kyland and Claire
They’re trying to figure out what the Wildcard is for next week.
Claire – I get Safety either way
Ky – how does it feel
Claire – I’m not going to lie feels great.
Ky – and you did it by so much
Claire – it wasn’t even close

(Claire may be safe next week as well but it means teams are for another week?) 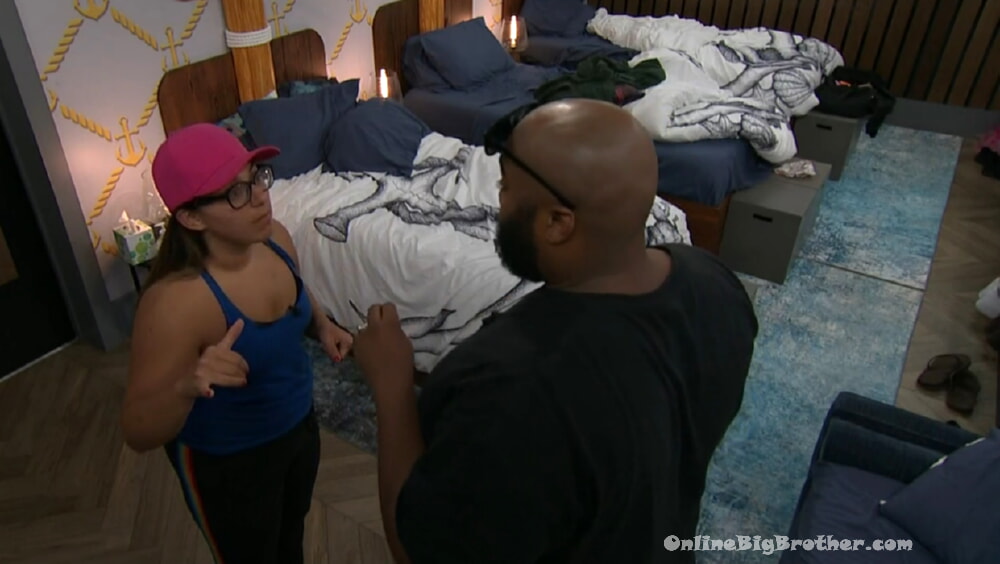 1:00 pm Brit and DF
Brit is going on about getting DX on the block.
DF – it’s important that Alyssa and HWitney get out before jury but that’s not going to happen is Whitney doesn’t go this week and Alyssa next week 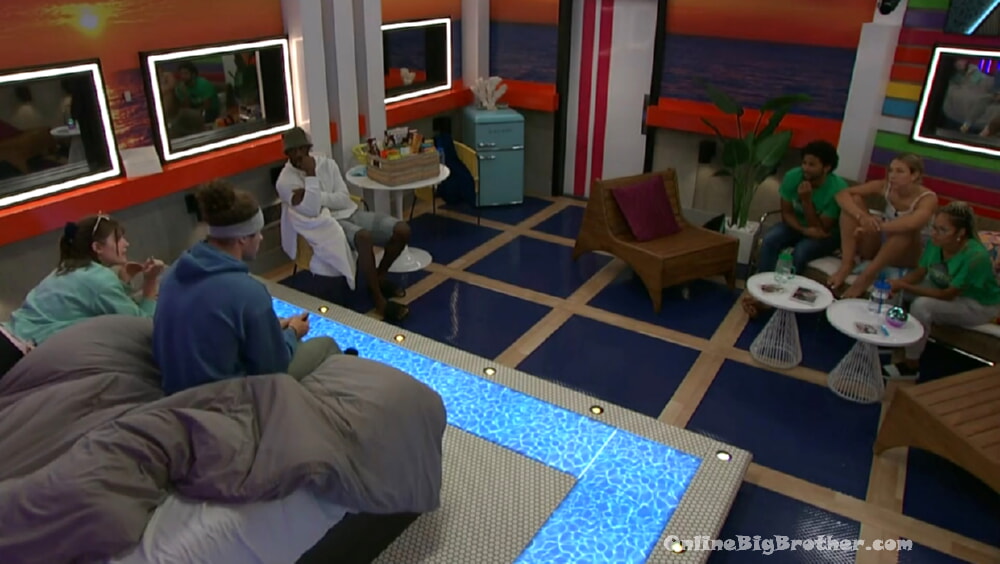 1:04 pm Royal flush meeting
Sarah beth says she wants Hannah out gone. Highlights how she’s been throwing competitions.
Christian says she’s more likely to win the HOH.
SB says she has said she would put up and Alyssa up.
X – how does it benefit her game longer-term with two of us up?
Alyss a- the only reason why I agree with Hannah, is that Whitney would be the clear target next week
Kyland says Hannah’s jury vote will be logically based on the game but Whitney will vote for a girl.
Christian – but she’s not getting to Jury

SB – it’s wonderful that you guys can already think about jury I’m still trying to make it to jury. If Hannah wins next week my butt can be on the block and I could go home.
Ky – it wouldn’t be
SB – if it’s me and Alyssa. One of us.. if you want the whole flush to make it next week I have no doubt that if Hannah wins 2 people from our team will be going up
Claire – Whitney would potentially put up Christian and Alyssa
Tiff – can I saw soemthing. I might be completely out of line here and maybe nobody is thinking about this or maybe she’s not a target for anybody. I think there is somebody else that is more than a threat. that’s is Britini she wants to put up two guys we can all be in jeopardy and me and her would lose the only guy that we have and you guys would have to rely on Christian
Tiff – I know everyone feels bad that she was on the block twice in a row I don’t know what kind of promises every has with her I haven’t made her any but,..
Tiff- If I won next week I’m looking at Britini
Tiff says Brit told her she would put Xavier on the block.
Tiff adds the reason she said X was because apparently he told her if she was going to put up a King make it him. X confirms he told her this.

Tiff – she did tell me she wanted Whitney to stay
Alyssa – you heard my name from her?
Tiffany – yes ma’am

SB – we are naive if we think anyone outside of the royal flush wins next week and doesn’t put two kings up they are going to put two kings up if not two kings a King and Kyland are going up
Tiffany – I think that could happen
SB – It’s going to
Alyssa says that Hannah will work with them not against them
SB – you all are saying that thinking that she knows we’re working together
Ky – she’s saying you four (Kings)
SB – but why? 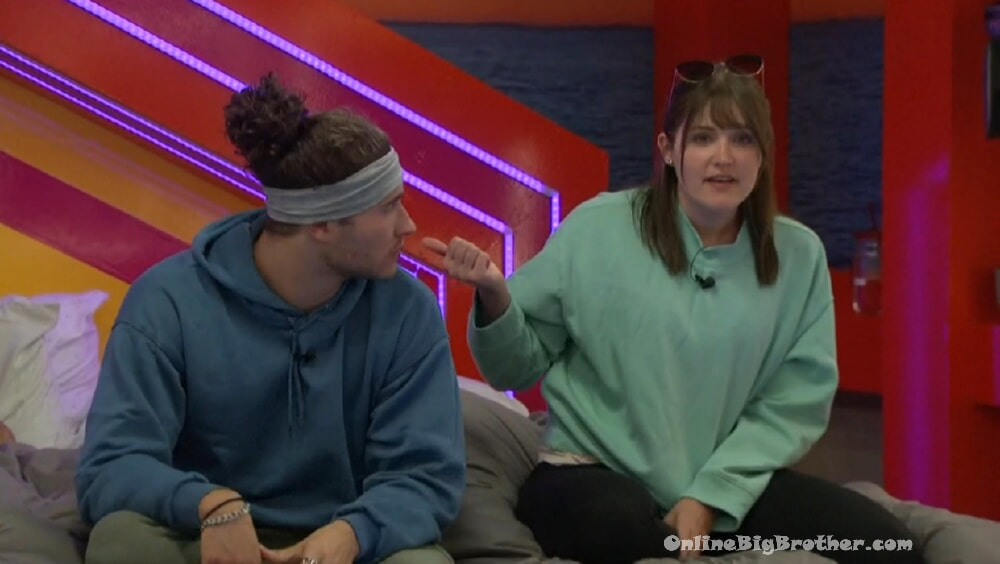 SB – the way I see it is anyone outside of the royal flush next week two kings are going up it will be smartest for us to get out who is the most likely to win next week out of our pool of people.
Ky – Brit is more likely to win over Hannah.. easily
SB – I disagree with that. Hannah also really scares me because she’s really close to several people in our alliance and someone who isn’t close to her you have to understand how that scares me. Especially seeing how you guys FIGHT for her so hard.. Hannah should stay.. I feel safe with Hannah.. Hannah is not a threat to me.
SB – She’s playing a similar game to Whitney she’s just good at it she’s been able to convince you guys she’s not a threat.. you can convince her you can have her under your wing
Tiff – just to be clear I’m not fighting for Hannah..

Ky – you’re fighting to save Whitney ..
Tiff – how do you feel Christian ..
Christian says the three people he was thinking of are Brit, Hannah, Whitney.
Alyssa – the one person I feel you will lose against is Hannah
Christian – I think I will lose to all of them.


1:25 pm Kings
Christian says he’s not putting up Britini says “they keep throwing out Britini.. I can’t do Britnini ”
Alyssa – Whitney and Hannah and if one of them comes off someone else
X – yeah. whoever gets off the block the other one is going home
X – I don’t want anyone to feel threatened if it’s Hannah this week or next week she’s gone
Alyssa says the reason Hannah didn’t want to win this HOH is that she didn’t want to have to put them up
Christian suggests they put p DerekX to throw people off. Alyssa and Xavier both shoot that down.
X- no more guys

Sb says out of Whitney and Hannah she trusts Hannah the least. Points out that Whitney isn’t smart enough to hide her tracks.
Sb – someone that is predictable like Whitney doesn’t scare me as much as hannah
SB – Hannah has a much better social game

Bruh!! SarahBeth is close to figuring out the cookout!

Whitney for veto ! Just to stir the pott
I don’t care if she does leave

Yes this would be absolutely amazing that way it is Hannah next to Azah on eviction night and one of them is gone!! They need to get Hannah out it is the smartest play.

Xviar need to relax before he get caught trying too hard for Hannah . There is a wuld card and a veto. Don’t get stressed it’s jot like he wants to put two of your alliance member just one. Hannah got the votes .

I thought Julie said that this was the last wildcard competition and there would be none next week?

Not a fan of Whit’s but hoping she wins veto just to cause chaos…… who am I kidding, the cheesy rapper goes up as a replacement and voted out (yawn)

Hannah is the one that needs to go! Her leaving would damage the cookout significantly with them all getting the least amount of blood on their hands.

The Beef(@the-beef)
Reply to  BB fan

Hell, Smoking D and Azah don’t even consider Hannah to be a MEMBER of the Cookout, so I don’t see how losing her would damage them much, UNLESS she gets wind of the fact they aren’t supporting her, and then she might blow up the whole alliance. But that’s the only way losing Hannah is going to hurt the Cookout much. Otherwise, it will be business as usual for those guys, and they will carry on with their agenda, and continue knocking off honkies, until they are discovered by said pale faces.

I’m not a Brittney fan but I don’t think she realizes she put a target on her back. I know Hannah and Whit know they need to win POV. I do wonder what punishment Claire will get?

Christian should put Brit & BigD up, who cares if any of the Jokers get upset. Azah, Brit and Big D have all shown that they cannot win a competition to save their life when it is really important.

I know it’s wrong to say this, but Brit on the block for the 3rd week in a row is priceless, now if Brit or BigD win the POV, put up Azah and vote Brit out so we can stop hearing her pathetic rapping and rhymes.

I’d enjoy seeing BigD turn the house out as he has said, drama from Brit and BigD flipping the out inside out, that would be worth watching. Both are all talk, Brit is annoying as hell, and she gives the impression we all are pulling for her, EVICT Brit, let the games begin.

Man, SB is really insightful with her observations. She hasn’t pulled it all together, but she has the weapon and the room. She just needs that last clue to solve the case. Smart cookie that one.

I also have to say that I’m impressed watching the cookout work their strategy. It is really interesting to follow the conversations and see how they redirect the focus on their members. If they keep it together and pull it through to the end it will be a pretty solid win. I hope they don’t steamroll the season because that is just boring, but they have a potentially winning alliance here, with a solid strategy. Still, hoping for Whitney to win the veto to keep things shook.

I’ve been an SB fan from the start — BUT — as smart as she is by her being so adamant about targeting Hannah (and in fairness not knowing about The Cookout) she went from being on ONLY Hannah’s radar to making everyone in Cookout (plus Claire/DX) to want to move her up their target list. Working in her favor is Ally/Chris will likely be ahead of her but I’d say she went from being in the bottom 3 of going on the block to being top 3 which is a hell of shift in a day.

Does it make any difference that Azah and Smoking D don’t consider Hannah to be part of the Cookout? I keep hoping this small detail will make a difference in this racist alliance steamrolling this season and eventually driving a stake through the heart of the Big Brother USA franchise, as if she ever finds out they don’t consider her to be a member, she may blow it up and save all of us from the ending this alliance seems to guarantee. No, I’m not talking about a POC winner – I’m talking about either 6 for 6 or 5 for 5 in the end, depending on how you view Cookout membership.

I agree that SB is pretty smart and is going to figure this thing out sooner or later. Claire too is smart enough to figure out what is going on, but the rest of them seem to be dumber than a box of rocks! But if they keep evicting white people, even a turnip can figure out what’s going on when it gets down to 6 – 3, and people are voting out their old teammates! I wonder what happens then? I wonder if they will see it as “good strategy” or if they will see it as something other than that? I wonder if they will see it as “just a game” at that point, or if they will think maybe they’ve been had, not only by their fellow houseguests, but also by production and the CBS network, in the name of supporting this “woke” society we all seem to be living in, in today’s times?