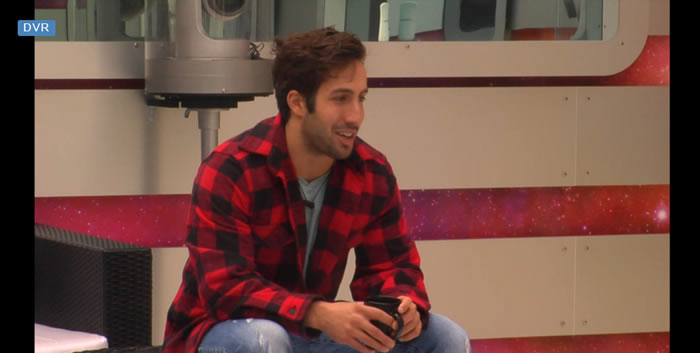 10:20am Emily and Dillon
EMily – frig tomorrows Thursday I hate Thursdays.. Have to figure out what I’m wearing

10:30am Hot Tub Demetres and Bruno
Demetres – F*** I’m not looking forward to tomorrow..
Bruno – is he still pushing
Dmetres – he said his piece
Bruno – if tomorrow is another nothing day… F****
Demetres – we’re going to have to put Ika on a f***g chain, she was having a bad day yesterday
Bruno Jokes they’ll put her in the hot tub area and hold the door shut..

Demetres says he doesn’t know why Ika hates Jackie so much.
Bruno – I don’t know where that came from
Demetres says Ika needs to focus all her negative shit on one person otherwise she’ll piss everyone off.
Demetres is worried if Jackie wins HOH she’ll throw Demetres up just based on association.

Demetres thinks that Ika and Dre would go up if Jackie wins HOH. He would be a replacement nominations.
Bruno – we would have to win the veto.
Demetres hopes it’s a knockout competition.
Bruno says William and Dre would knock him out.

Bruno says he’s convinced EMily to not put Demetres up, Dillon he’s still working on.
Bruno says the “KEY” is to keep Jackie and Dre apart.
Demetres doesn’t see it happening because Dre and Ika hangout all the time and shit talk Jackie.
Demetres says Jackie is in for a tough ride with a girl like Ika in the house.
Demetres and Bruno agree Ika is tough. Demetres says he wouldn’t want to put Ika up it would be scarey.
Demetres jokes if he wanted her gone she would have to be backdoored.

11:00am Ika and Dre Bathroom
Ika says Demetres mentioned Bruno said he would put Dre and William on the block.
Ika adds if Dre win HOH she would have to put Bruno up.
Dre says Bruno won’t win HOH he’s too good of a spot.
Ika agrees adds Neither will Kevin. “All we need is to let Dre win HOH and put them on the block.. you strike when they least expect it”
Dre – exactly.. they wouldn’t know
Ika – they wouldn’t know what hit them.. they have no idea what is coming their way
Dre – if it’s a knock out competition I feel they will knock me out first.

Ika says the only people that she would want to win this game other than her is Dre and Demetres.

11:20am Bathroom Dre and Ika
Dre – you think I can create doubt between Sindy and Neda
Ika – no they’re tight

12:44pm Demetres and Ika
Demetres doesn’t think Production will screw him over with the vote. They can’t have him standing up in front of everyone and get him to vote someone out then say “Psyche”
Ika says Gary thinks he’s 80 or 90 percent safe.

Demetres says it’s going to look bad for both of them to Gary.
Demetres – whatever..
They agree dre should go after Kevin and Bruno.
Ika – I trust her
Demetres – you’re tighter with Dre than William
They mention that William seems closer to Jackie now and it’s pissing Dre off.
Ika – Neda was telling me how Kevin and her were talking how good Sindy is in the game
Demetres laughs points out that Sindy is in their alliance and they are already talking like that.
Ika says Neda and Kevin are planning too far ahead in the game.

Ika – Kevin sucks.. he legit just sucks at life I can’t look at him.. he’s very transparent
Demetres – I’ll keep Bruno 10 times over him
Ika – he’s fake.. holy crap he’s fake
Demetres – he Believes in his own lies
Ika says Neda and Kevin’s lies you can see right through but Bruno you can’t. (He’s a pro social player)

They start kissing.. They talk about about the HOH ipod and how Neda would always hide hers so the battery would stay.
Demetres says he used to have a huge vein pop out in his bicep but since he hasn’t been working out the vein isn’t there.

Neda and Jackie
The joke that Karen is going to be Final 2.
Jackie says it sucks right now because if she gets to final 2 she;ll never have Ika, Dre’s and Karen’s vote.
Neda – do you thinks William will always stay on Dre’s side..
Jackie doesn’t know.

They Mention how good at comps William is.
Neda says Gary might be assuming that the twist will save him.

Jackie leaves.. Neda talking to herself.
“Ika wants to keep Dre around so Dre will target Kevin and Bruno when the time is right”
“She (Ika) Doesn’t want Jackie Dillon or Emily around so we have a little bit of time before she turns on the six”
“We need to get to her before she turns on the six.. it’s sad but the only person I can trust in the six is Bruno.. it’s sad.. how did that happen” (Bruno’s solid game is really starting to show.. both sides have said they trust him the most)
“When immunity is up I should be Ok with everyone beside William.. and he’s OK with Competitions.. he wouldn’t do Jackie and I dont’ think he would do Emily and Dillon”
Neda adds she wants William gone before Dre because Jackie will always be after Dre and Dre will always be after Jackie.
Neda – do I want to win this HOH.. no no.. I’m still immune I want to win it after my immunity is up”
Neda – Sorry fans I know we’re being annoying getting rid of the entertaining people like Cass and Gary but they just suck for my game

4:15pm Sindy and Bruno
Sindy giving him the low down of her conversation with Ika. Says Ika and Demetres are trying to move the target off Bruno and Kevin.
Sindy says she trust Ika
Bruno trusts Ika too
Sindy – Neda said Smack about me.. to Demetres.. she told Demetres that I threw the comp and she told Demetres that I’m annoying and I only talk about myself and I don’t know what I’m doing.. (Damn)
Bruno – Don’t Worry Sindy we got you man

Bruno – Ika’s good
Sindy – yes.. she would have told me she doesn’t trust you
Bruno – Sindy I do trust you 100
Sindy trusts Bruno
Bruno – Neda is going to have to go for sure..
Sindy – nobody knows what Will is thinking
Bruno – he’s the won that voted for me
Sindy – I prefer him over dre… I have a connection with Dre
Bruno – If I put them up he would go home

neda on a leash!

Things I’m waiting to see at this point:
is Sindy going to report back to Kevin and Bruno? If she does, she’s loyal to her season 3 alliance. If she deosn’t, she’s playing the middle in the six alliance faction war that is soon to come. I’m not sure which is better in her game, but since she’s invisible a lot, it would give some perspective into what she’s actually doing.
is production going to push harder for an Ika on Jackie explosion? The longer Jackie doesn’t show a reaction to Ika over the shredding, the more cagey Ika gets. How long before the countdown reaches zero and critical mass is reached?
is Karen going to go any further into an alternate universe? Is there any further she can go in an alternate universe without actually transporting there? At this point, I’m hoping somebody actually does go off on Karen with a dose of reality. She’s the goat to the finals that thinks she’s Janelle 2.0 that the entire house has aligned to back door weekly.

Gary, Ika and Neda are in the lead for the favorites poll. So the people here like the most superficial, vain, narcissistic fools in the house? Yikes!

I’m sorry, but the fight I am waiting for takes place when Neda comes off the immunity. We all know that Kevin and Bruno are loyal to Neda to a fault at this point, and if Ika and Demetres make a go at her, there will be out and out war. The guys already know what Ika and Demetres are doing, so basically who will strike first. I heard Bruno tell Emily last night that if he gets HOH and one of his noms. comes off hes taking the hit at them. He and Kevin already agreed on this. Neda at this point does not know about it. They plan on putting Demetres up because Ika will be weakened. There are a lot of “IFS” in this but the pot is boiling at this point, and Ika and her big mouth could be in some serious trouble this next week, especially if she keeps spewing her venim.