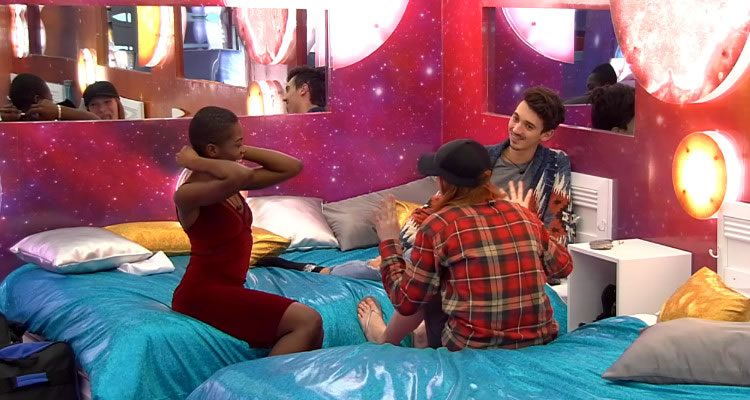 Ika says Dillon is throwing out Dre’s name as a target. Mentions that DAllas and Dillon are bros again. Ika adds that Dillon is after Karen, Demetres, the french connection and the vets. (LOL everyone)
Ika – he said he doesn’t know about you guys .. he said you guys are sneaky
Dre thinks Dillon will go after vets first.
Ika is trying to get Dre to vote out Dallas.
Dre thinks Dallas is going to go after Dillon.
Ika – I tell you they are friends again.. Just watch.
Ika says she only cares about Dre and William, “You have to think of long term goals”
Ika – you have William
Dre – Kevin is playing William right now
Ika – You have Sindy and Neda.. Sindy and Neda are close to Bruno and Kevin. I’m working on them.. You have to start talking to them.
Ika – I trust Neda’s instinct I don’t trust Cassandra
Ika says Neda told her that Kevin really cares about William if any of them win HOH Dre will not go on the block.
Ika adds that neda is working on Kevin and Bruno, So is Sindy.
Ika – you have to trust the people you are working with
Dre – I don’t trust Kevin and Bruno
Dre – I don’t trust Sindy
Ika – I don’t trust Sindy.. She’ll pick them over you (Neda, Kevin, Bruno)
Dre wants to put up Kevin and Bruno
Ika says the only reason Dre should win HOH is if it’s her against Emily because Emily is more likely to put up Dre than kevin and Bruno (LOL BS, Dre is too smart to buy that)
Dre – Emily?
Ika – Yes she will.. She will..
Dre – Emily is not coming after me.. She’s after Sindy, yo and Cassandra

Ika tells them that house is wanting Dallas out.
Ika – It’s not in our best interest but I don’t want you guys to stick your necks out week 2 because we’re safe..
Ika – Week 2 if we try something it won’t be good week 3 and 4
Ika adds the only people she will fight hard to save is Dre, William and “maybe” Neda
Ika – don’t stick your neck out for anybody that won’t stick their neck out for you that’s what I’ve learnt in the game.
Ika didn’t like Kevin at first because Cassandra was feeding her things about him
Ika says kevin is weird but William has to build a connection with him and Kevin will protect him.
Ika – Don’t work on keeping Dallas.
Ika keeps warning them to not fight to keep DAllas otherwise they’ll end up at home watching the show.

Dallas tells Karen beginning of the week he was throwing her name out there but hasn’t said anything lately.

Jackie says she was scared that it was going to be Kevin as the replacement nominee
Kevin – Emily really doesn’t talk to people .. she just talks to Dillon
Jackie says the 2 people that EMily would put up are Kevin and Karen.
Kevin – I’ll have to talk to her.. I know she’ll put me up.
jackie – are we in a position where we need to win HOH
kevin – I’m going for it.. too crazy of a season
Jackie – who would we put up
Kevin – Dillon is a easy on
Jackie agrees adds that Karen is a easy one but really not worth a HOH
Jackie – you’re getting close to William
Kevin – we just flirt we don’t talk about game.
Kevin – Dre and I don’t talk at all.. you talk to Dre at all
Jackie says not much says that Dre wants to keep Dallas.

Emily says Dallas is a HUGE target in the house. He’s tight with everyone and it gives the vets more power.
Dre asks if he’s “Reconciled” with the vets
EMily – what does that mean
Dre explains
Emily – he said he did it out of desperation..
Emily says Dallas and Dillon are friends they knew each other before they came into the house.
Emily says dallas is gunning for HOH and putting up two rookies
Dre – who’s playing us
Emily – Dallas .. he’s a HUGE threat he’s the king of POVS I’m not coming after you guys.
Jackie joins them.
Emily says IKA, Cassandra and Demetres are a group they’ve gotten close. Those three are close to Dallas.
Dre says they need to stop identifying themselves as newbies they are all equals.
Jackie points out that the veterans act like they don’t know how to play.

Dre says they are voting with the house. William agrees.
Dre – I have a good relationship with the other side of the house..
Dre will let them know what the vote will be so they can all be on the same side this week.
Jackie – we’re in a really good position You’re good with Ika, I’m good with Cassandra and Kevin
Dre – I’m a little shady about Kevin
Jackie – we have a really cute alliance name we’re called the leftovers

11:45pm Cassandra and Emily Hot Tub
Cassandra says this is Big Brother Canada on Steroids. She’s having trouble believing people, “there’s multiple multiple alliances”
Emily asks about Ika
Cassandra – Ika’s close with Neda she’s close with Gary..
Cassandra – out of the returning people I’m at the bottom of the totem pole
Emily – seems like Dallas and you are really tight
Cassandra says Dallas is tight with a lot of people and him turning on the newbs is a big red flag.

12:02am Ika and Neda
Talking about sticking with their Demetres, Sindy, Kevin, Bruno, Neda and Ika alliance.
Neda – we have such a good thing I’ve never had this in the game.
Neda doesn’t want to tell Dallas he’s going home.

Ika says they have Dre more than Cassandra.

1:07am Dallas and Bruno Hot Tub

Anyone have the video.. or know what happened after Karen tried to stir the pot with Jackie and with Ika and Cass trying to console Jackie in the storage room?