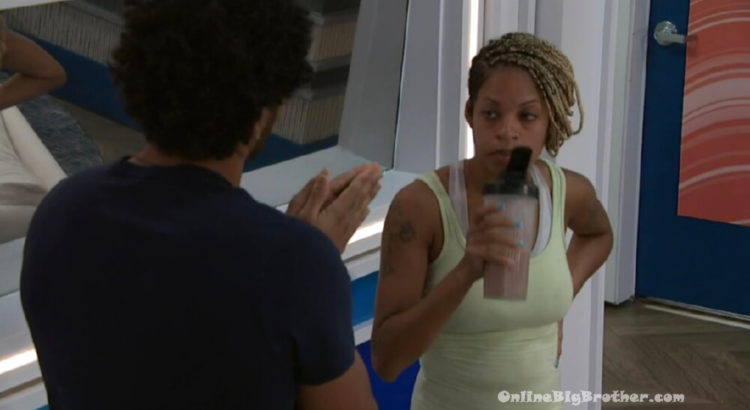 Big Brother 23 Houseguest Rankings – – RANK THE HOUSEGUESTS –
View the previous day ranks on the – Ranking Grid
Big Brother Spoilers – Hannah has the votes to stay and I don’t really see that changing.

11:08 am Feeds have been down for an hour after they woke up. Alyssa, Kyland, and Christian are studying..
Girls are getting ready in the bathroom. 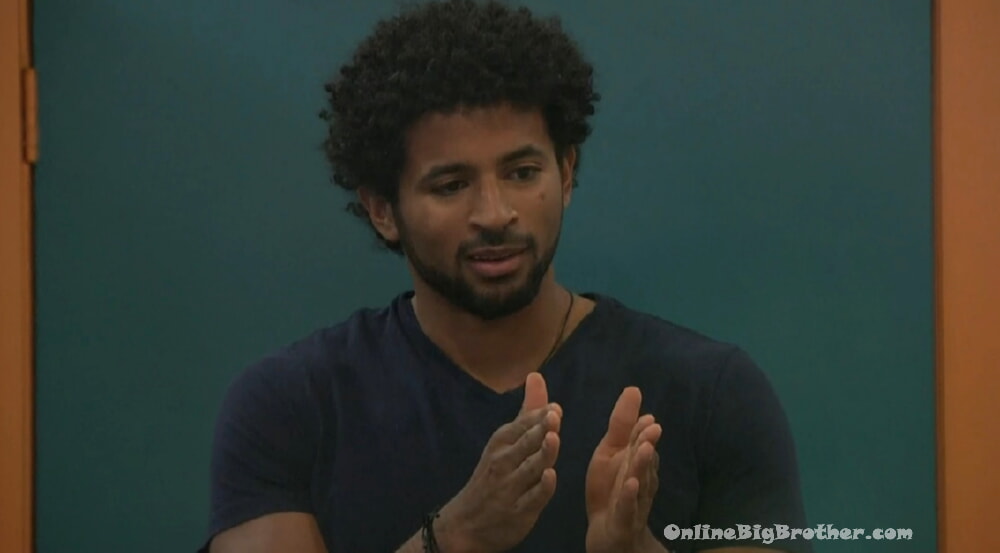 11:26 am Kyland And Xavier
They are strategizing about competitions. They’re agreeing in a head-to-head competition take out Britini followed by a king. Then DerekX followed by another king. 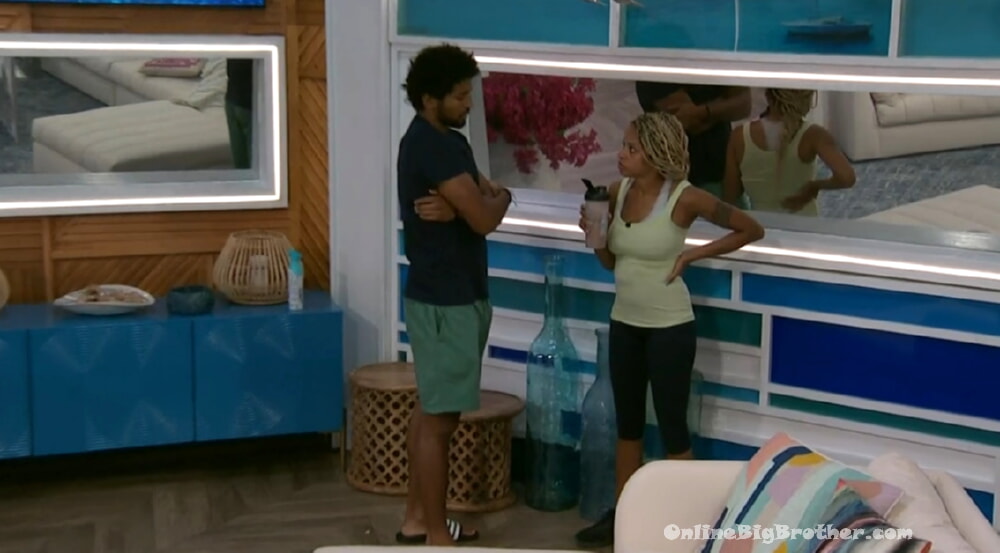 Kyland tells Tiffany about the Head of the household being a 3 button comp. “Pick two people.. there’s been 4 HOH, 4 Vetos, 4 wildcards so the math there is always 12 options. 3 buttons in front of us.. Be prepared cause at most you only have two chances to pick people for each of us. Just make sure you have your set of two. don’t tell anyone that’s not advancing for our benefit. the math Works out.. ”
Kyland – do you know all the comp names and stuff.. I have days better than Comp names and stuff.
Tiff – I work on them
Kyland – I need some help
Tiff – you may need to ask somebody else (wow)
Kyland – who
Tiff – Ask SB ..
Ky – you just said you got them?
Tiff – I said I work on them.. I mean I would ask her..
Tiffany walks away. 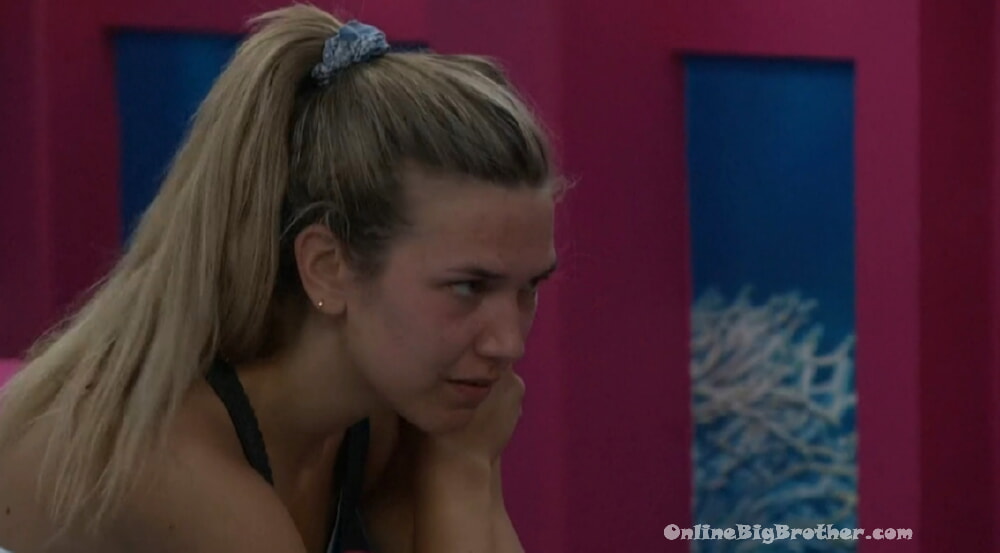 11:35 am Kyland and Claire
Kyland now going over the head-to-head plan Britini and a King..
Claire – if the kings win (HOH) they’ll probably take a shot at Hannah or .. I don’t see them turning on us this early
Kyland – that would surprise me. I would rather Britini than Hannah by a lot.
Claire – I see arguments for both of them.
Claire – Britni would win more comps than Hannah.. Azah did very well in that veto
Kyland – she’s by herself
CLaire – I love DerekF but I don’t think DerekF trusts me 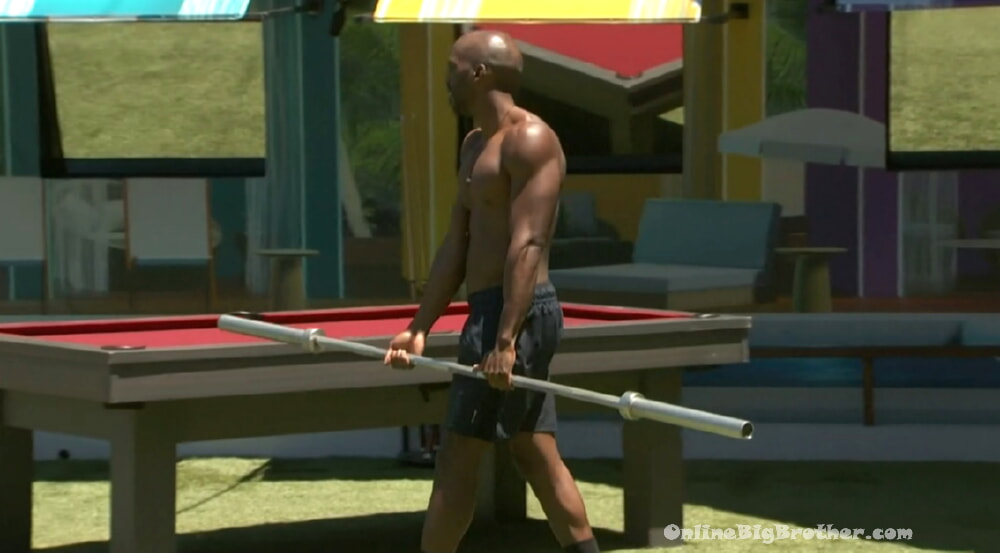 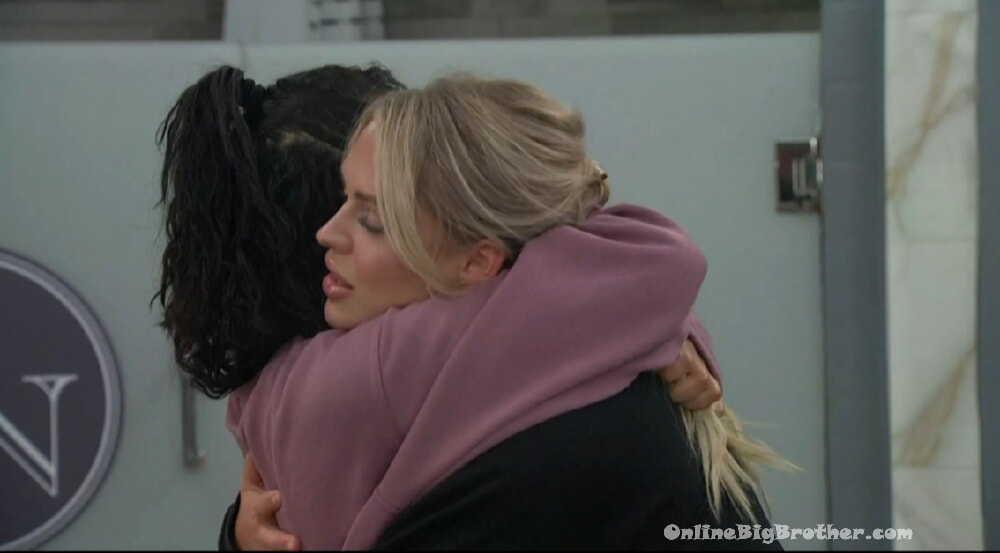 1:05 pm Veto not used Whitney and Hannah remaining on the block. Whitney getting evicted as of now.

The exercise room looks a little tight. Only meant to fit a few people at a time I guess

So what will Kyland do if he gets wind of the fact that Tiffany is trying to make circumstances fit her narrative? SB is nice but it will depends on how SB gets wind of it whether she keeps her calm or not. Tiffany better be careful; even Moriarty’s schemes occasionally got out of his control

Tiffany and KY have the most unloyal final two deal I have ever seen on BB.

Robert
Reply to  Hopeful for a Good Season

They need to target Hannah and get her out!
Though its made Sarah Beth a target for the cookout I appreciate what she’s been doing!
SB and Alyssa had made a lot of sense on why the target should be Hannah. It’s fair to point out that it is A red flag when Xavier, Tiffany, Kyland continue to get protecting Hannah in conversation and keep denying her threat level when their suppose to be in an alliance together and she is the strongest player on that side of the house outside the royal flush. Now Tiffany wants to target SB because of Hannah’s appearance and how SB wants to go against the cookout playing with race. When itsTIFFANYS FAULT she double dips everywhere in the house she’s covered on every side.
Not to mention Tiffany constantly sparks up conversation on the side to Hannah about ALYSSA BEING JEALOUS OF HER?!?
There’s a reason why she doesn’t want to win HOH Tiffany she’s covered everywhere and everyone should have a right to be sketched out by Tiffany!! It is complete garbage how she’s been spreading fake drama around the house – it makes her look more and more insecure.

On top of it, Hannah has out right has said on last Thursday’s episode showed that she was already going to put up Christian and Alyssa had she won HOH this week! In yet Tiffany wants to keep protecting her in front of SB and Alyssa There is a reason why Hannah should be on block and voted out – she has outright lied to Alyssa and Christian about what she was going to do if she was HOH.
Tiffany has also become more and more obsessed with bring up Sarah Beth to Hannah. It’s becoming increasing obvious that SB and Alyssa are seeing how shady the members are becoming in their royal flush alliance – the fact that they keep on protecting Hannah is shady when they are suppose to working with the Kings in yet Tiffany continues to bring up SB, Alyssa, and Christian as her targets when she talks to the aces and Jokers. Sarah Beth and Alyssa are right to be targeting Hannah as well as being triggered when Kyland, Tiffany, and Xavier keep protecting and avoid the question of why the HELL THEY WANT TO KEEP HANNAH SO BAD?!?
They need to get HANNAH and Tiffany out!
They have every reason to be sketched out by Tiffany over playing her hands with every part of the house!

As much as people continue to not see Alyssa and SB as popular players for America’s vote.
People truly to need realize that those two girls and Christian need to have more SUPPORT because they are ONLY HOPE to seek outthe cookout and make this season one of actual ENTERTAINMENT! They are the only ones left who could take out pieces and dismantle the cookout!

i hope teams are over after this week, this first month of house targets is the worst.

It’s sad that the ‘cookout’ had made this game racist! This game has nothing to do with the color of your skin unless you make it that way!
Let’s play on your abilities of using your brains, strengths, socially, etc…and let the best person win!