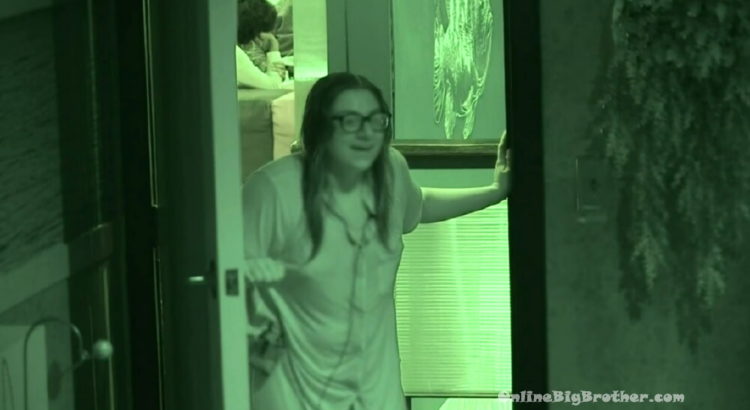 Big Brother 23 Houseguest Rankings – – RANK THE HOUSEGUESTS –
View the previous day ranks on the – Ranking Grid
Big Brother Spoilers – So far Hannah has the votes to stay and I don’t really see that changing. Veto will not be used today unless Britini walks in on the showmance again ;). 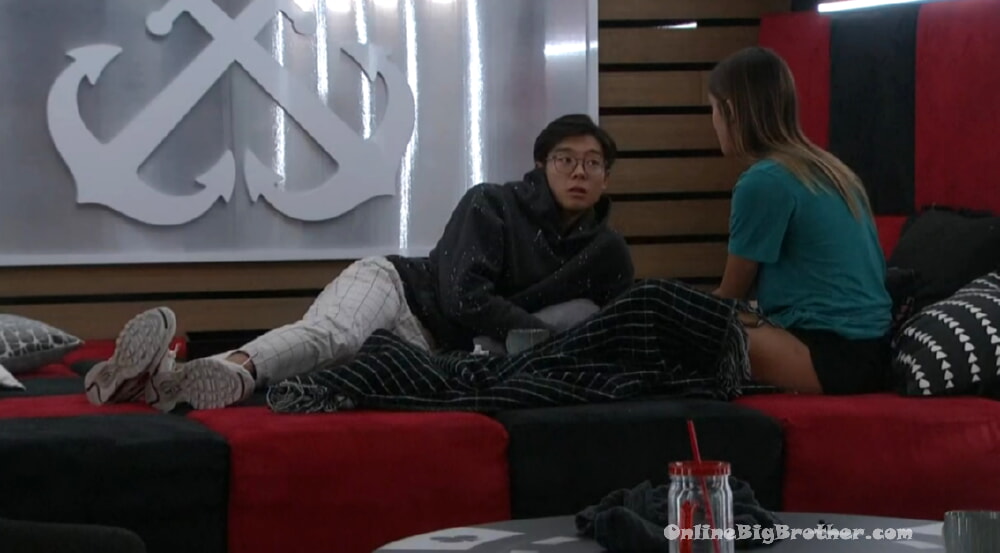 1:25 am Alyssa and DX
Alyssa – Hannah is going to talk to you later because.. it’s crazy..
Alyssa goes over a conversation she had with Hannah “I wanted to talk to you personally because Christian put you up and people see us as a Duo I want to play an individual game.. You’re not someone I want to go after You’re someone I ACTUALLY enjoy being with her. Christian’s game is not my own game. I’m not saying I understand his decision and I’m not saying I would have done the same thing.
Alyssa – she was saying how it’s smart for you and Christian to work together but not act like you’re working together
DX – she’s on the same page
Alyssa says people see DX and Hannah as a Duo and her and Christian as a duo so why not work together
Alyssa – she brought that up
Alyssa – no matter what it’s the Royal FLush before anything.. all she said we can look out for each other the following weeks
Alyssa – sadly she’s not part of the 8 but hopefully if someone outside of the 8 wins HOH before the 8 who knows Hannah could be a replacement
DX – Damn..
Alyssa – she’s going to talk to you guys.. It’s kinda genius
DX – I like that collection of people for sure
Alyssa – the 8 is the final 8 I trust Hannah more than some of the people.. At this point just stick with the 8 there no point to change it.
Alyssa – I think Azah would put up be and Christian or Ky and X because how they put up Britini
DX – I don’t know if she would do a big move like that
ALyssa – who else would she put up?
Alyssa – did you see how close SB and Ky were tonight?
DX – yeah..
Alyssa is pissed that SB/KY can be together and the house doesn’t shout DUO but when she goes into Christian’s room to brush her teeth everyone loses it.
DX points out that SB has a girlfriend already.
DX – Ky does that with every girl.. he does that way more with SB agreed.

DX says he’s not close with Ky on a personal level but he feels they are good on a game level. Says he doesn’t see either of them putting each other up.
DX suggests they build a four of the of 8 that includes Christian, Alyssa, Himself, and Tiffany.
Alyssa – I can see that
DX – it’ll make it less messy 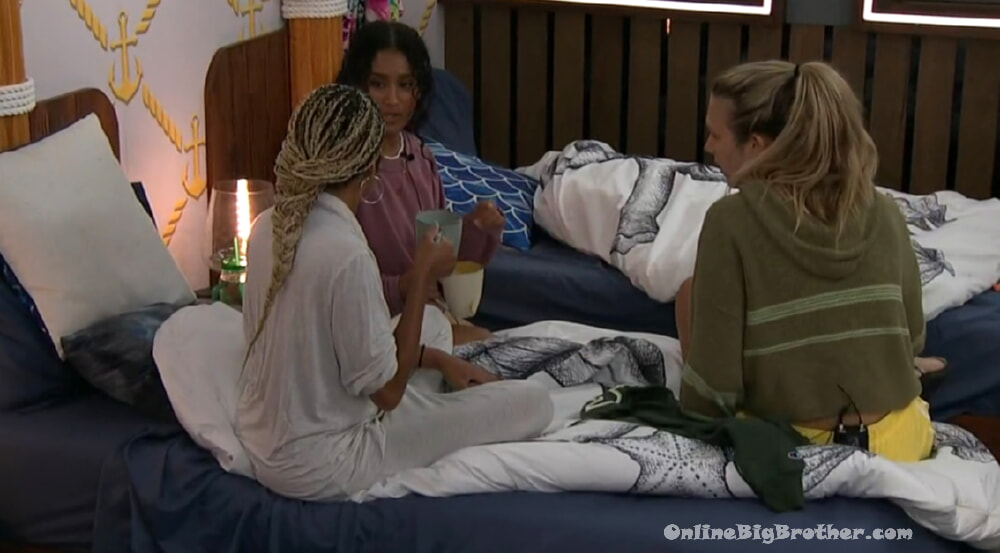 1:46 am Tiffany, Hannah and Claire
Whispering about how much time SB and Ky are.
They’re talking about this weeks plan to have Xavier and Alyssa throw the HOH so they can get SB out next week.
Tiff – Xavier knows he’s throwing it.
Tiff – I was wondering if we can get somebody.. BIGD would be a good one. If we can get BIGD to start cracking jokes about them (SB/KY)
Claire – he sorta already is
Tiff – she would get mad that would move the target off you (Hannah) 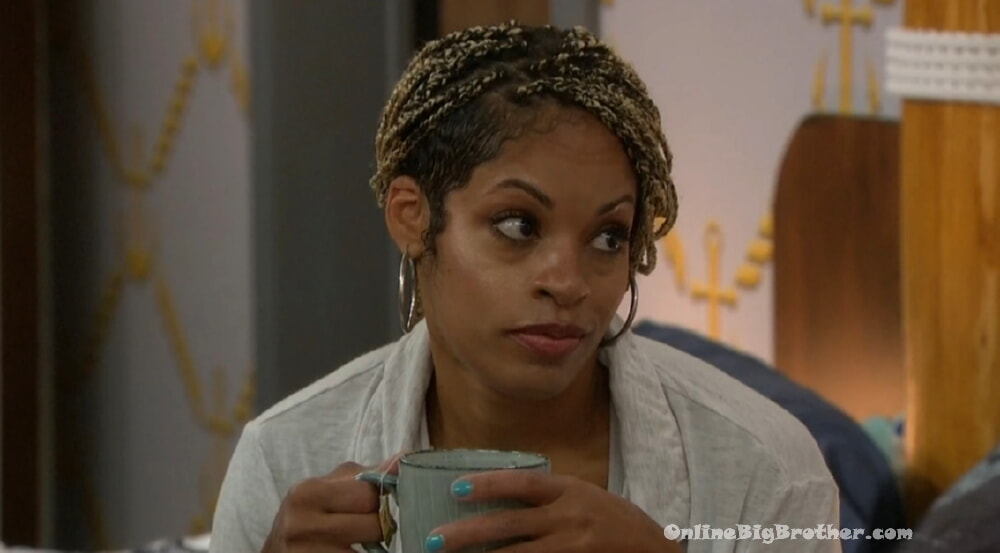 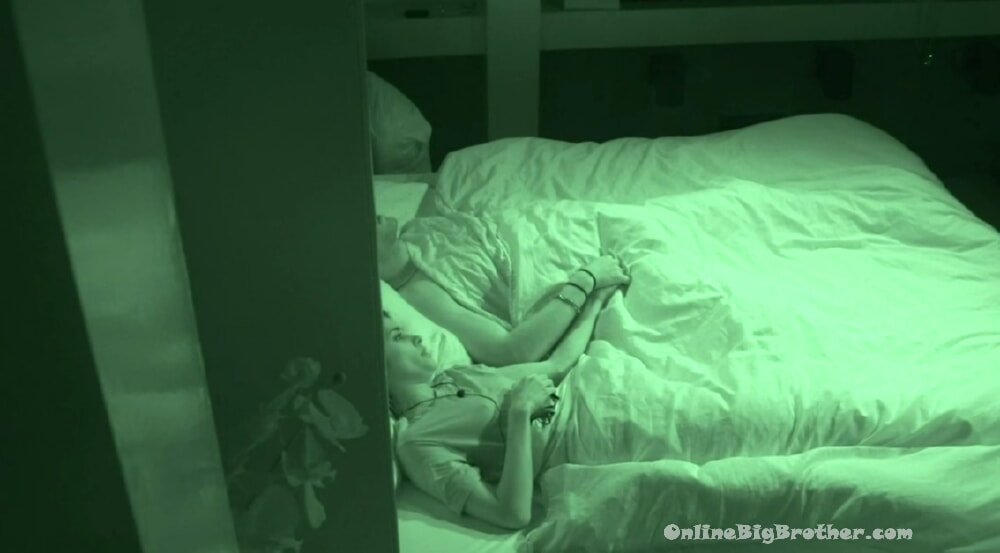 1:58 am Alyssa and Christian (Alyssa is secretly in the HOH)
Alyssa bringing up her conversation with DX where the ‘looking out’ for Hannah was talking about
Alyssa mentions it was brought up as a contingency.. DX was onboard.
Christian – in Hannah’s mind?
Alyssa – we’re just looking out for each other
Christian – the furthest we take her is nine
Alyssa brings up DX asking out of the 8 which 4 do they feel good about.
Alyssa – I said who do yo feel good.. he said Tiff I said I feel good about Tiff
Alyssa – he was trying to make a final 4 .. I’m not an idiot I’m not taking DX to the final 4. whatever we can do to make him think that
Alyssa – I was going to say to him lets not worry about that now.


2:03 am HOH
Brit knocks on the door. Alyssa runs to the bathroom.
Christian – one sec Brit I have to find my glasses..

Brit – ohh are you going to sleep..
Christian – she’s in the bathroom
Brit – I need to apologize to Alyssa.
Brit – now I know what DSL means and I take the wink back.. (Something to do about when they were putting on makeup today and Alyssa said she had DSL. Brit didn’t know what that meant at the time and gave Alyssa a wink)
Alyssa says they were talking about the veto speech.
After Brit leaves.. 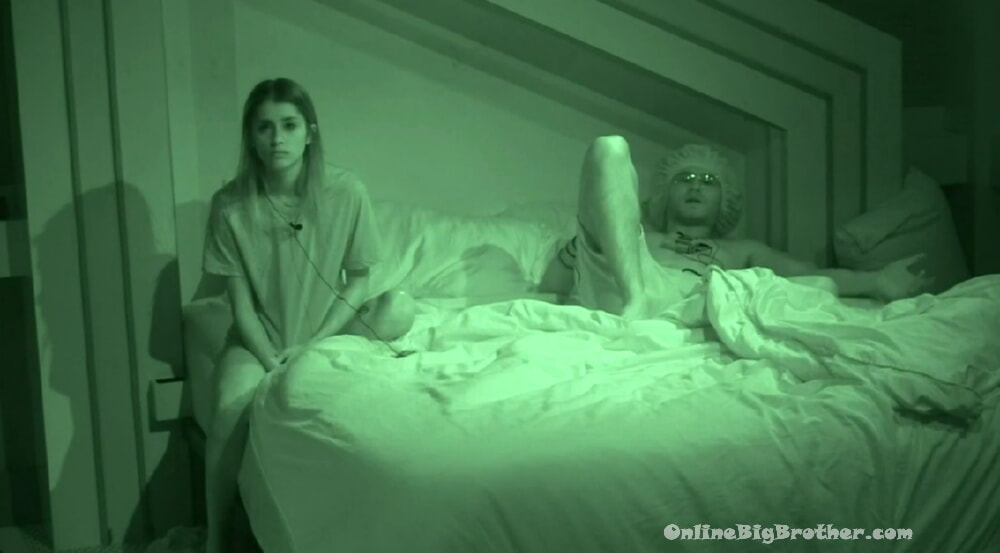 Christian – what the f***
Alyssa – she knocked on your door to ask about DSL? now I have to go down there..
Alyssa – I have no pants on and the lights are out. What the f** was that?
Alyssa – I need to go downstairs now
Christian – no you don’t.. Brit is on our side
Alyssa – why was she just standing there..
Christian is pissed they have to be so sneaky while “Kyland and SB can f* on the couch and nobody says a word”
Alyssa – people still see us as the duo
Christian points out even if Brit does say something people will be like “Oh oK” because they already expect them to be in the HOH together.
Christian – especially before veto Brit you want to start some shit
Alyssa – why did she just stand there
Christian – I don’t know the lights are off. I had to say you were in here otherwise she would be walking around the house looking for you.

Alyssa – that did not need to happen .. what the f** Brit
Alyssa continues to rant about Britini “Can you imagine being her roommate I couldn’t f** anyone”


2:11 am – 3:00 am Tiffany and Hannah
Talking about votes and targets for the cookout. Planning out the season for us.. (Groan) 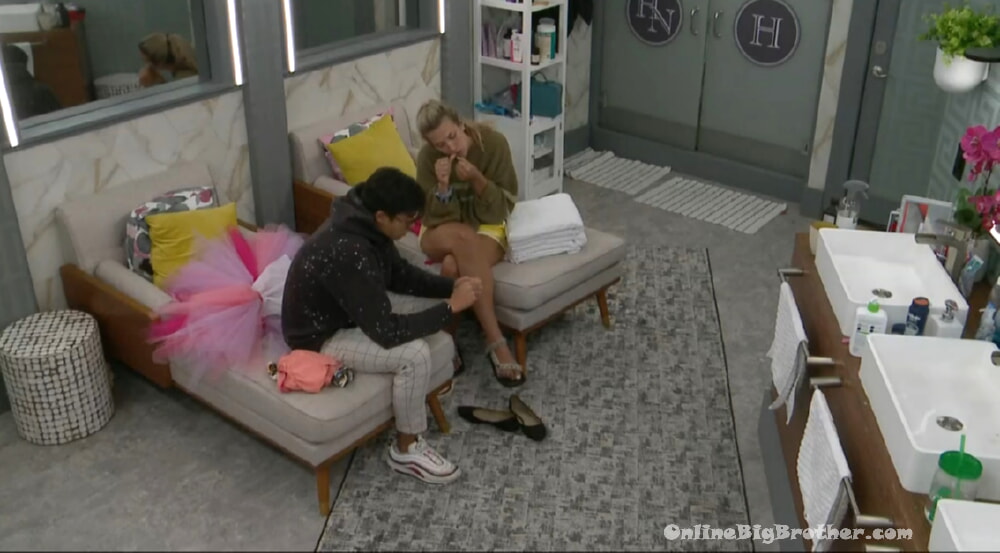 2:46 am Claire and DX
DX – I’m not sure how much her team has her back If I take a shot at SB I have three strong competitors gunning for me.
Claire – that’s fair
Claire – I don’t think I’m in a great spot with the 8
DX – I’m in the worst spot of the 8
Claire – whos in the best spot?
DX – the kings have the majority alliance
DX – if the kings win HOH they nominated me and Kyland. You guys have Kylands back so I would be gone
Claire- I don’t know about that. Of Course, we have kylands back. You V Ky would be tricky
DX – that would be THE nom
Claire – if the kings were taking an external shot. What if it was SB and Ky that were seen as the duo?
DX – you think someone from the kings would nominate someone from their own side?
Claire – no they wouldn’t
Claire – I think it’s more likely you and Hannah touch the block next week. If Alyssa were to win it I don’t think they would take that shot yet.
Claire – if SB won she would put yu and Hannah up.
Claire – if X ..
DX – I couldn’t see it if X won
Claire – what does Ky want to do
DX says if Ky won and put him and Hannah up then send him out because he doesn’t know this game.

had to look up DSL on the urban dictionary. lol

HA same with me. At first, I was thinking it had something to do with a camera.. DSLR

Also from Sarasota
Reply to  leross

Alyssa must be making her parents proud.

This group has sure come up with creative ways to stay entertained.

It is funny how they don’t see the obvious. SB and Kyland will never be a thing while Christian and Alyssa are in an actual relationship; so there is no hypocrisy

Feeds have been down since they woke up.

Are SB and Ky actually a romantic pair? I thought she was gay and in a long term relationship.