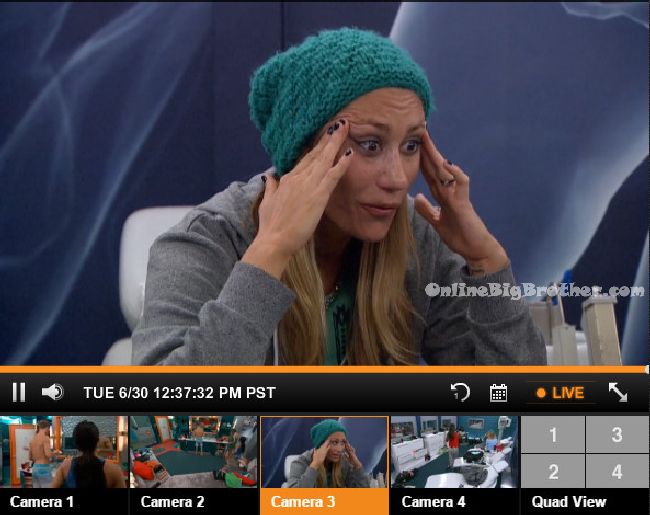 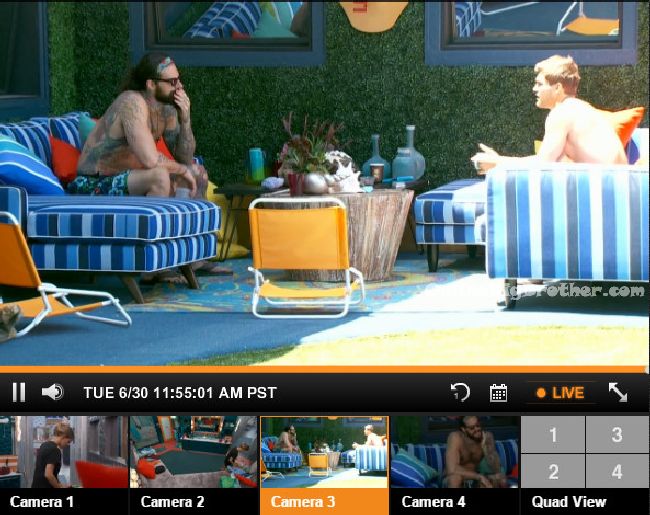 11:50am Clay asks Jeff what did you tell Austin. Jeff says basically that Jace blew up everything and that Audrey was the cause of it. He already knew. In the bedroom – Vanessa says to Shelli I just heard some weird sh*t. Shelli says I just want to get dressed and then I’ll come find you. Sit with me. Vanessa says no don’t worry about it. She heads into the havenot room. Out in the backyard – Clay talks to Austin. He tells Austin that Jace came and sat on the bed with us last night. I found out that someone said it was me and Audrey that were f**king him over. Clay tells Austin that everyone knows its been Audrey starting everything. Austin asks what do we do? Clay says nothing. Austin says I always felt like she wasn’t telling me something .. like she would say “people” are talking… Who are these “people”! Clay says last night it all came out. If she (Audrey) tries to exploit our alliance .. then we deny to the grave! Clay fills Austin in on last nights drama. Austin says she could have sat back. Everyone would have wanted her to win the money. Clay says I don’t know if she’s being told to so stuff like America’s Player or something. Clay says all that matter is that the four of us stay together. Austin says if Audrey tries to say anything about me it wasn’t me, don’t believe it. Clay and Austin agree to act normal with Audrey. Austin says she didn’t need to do all that we had a solid 5. Clay says I know. 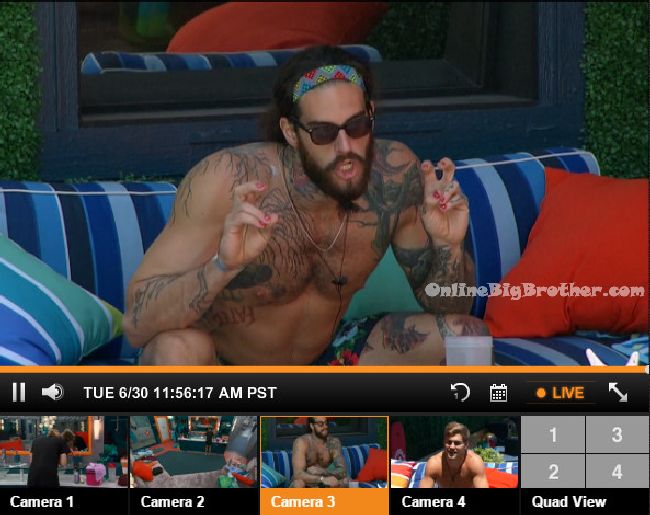 12:05pm In the bedroom – James tells Jeff I don’t think I’m allowed to say. Jeff asks should I expect anything today? James says no, nothing like that. Jeff says I didn’t know if I needed to be rested. Big Brother blocks the feeds. 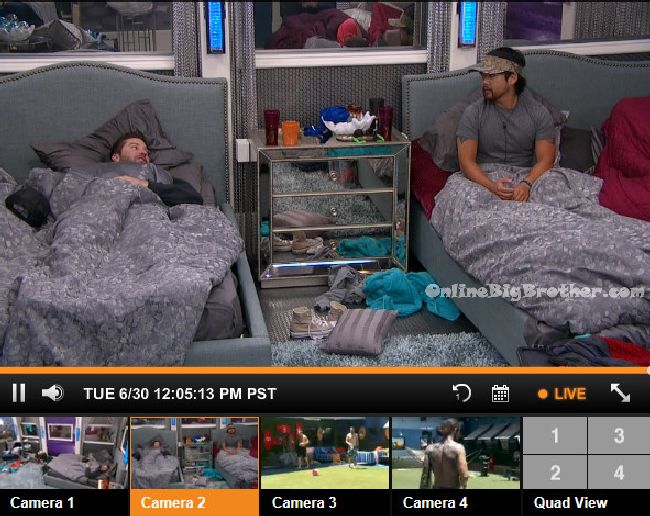 12:10pm Hammock. Liz says that Jeff told her if it was anyone else beside Jace the house would probably flip. Liz says I don’t know if I should say this because I don’t want it to get around but I think its better for him to not be here. I love Jace and he’s our bestie but .. James comes out with the HOH camera and they start taking photos.

Backyard Jason, Austin and Liz. Jason says I was ready to start sucking down other people medications last night with everything that went down. 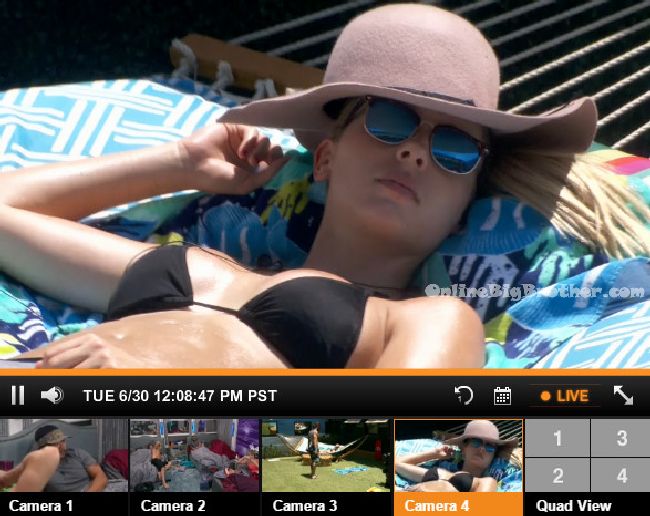 12:35pm In the havenot room – Shelli says the night started out with drama about Jace but it switched to people gunning for apparently Audrey. Everyone was up last night talking about that and I don’t know what to do. Vanessa starts to cry and says I came to you because I trust you and you talked to me the way people talk to Steve. Shelli says I looked like sh*t and was in all these shots last night and all I wanted to do this morning was put on some makeup and clothes before I talked to you. Vanessa says I was called a mastermind .. which is pretty funny considering I have the least power and have no idea what is going on. Shelli says Audrey has no idea all this happened, she thinks it was about Jace. Shelli says she had me believing for a second that maybe I couldn’t trust you but then I was like wait. Vanessa says are you kidding me?! DaVonne joins them. Vanessa asks Day about the girls alliance. Day says it was brought to me. I didn’t say anything about it. It was Audrey. Day says you could have come to me. Vanessa says she made me promise not to and I keep my word. Day says I am up to here with it! Everyone is waiting for Jace to go off! Day leaves. Vanessa says make me give you my loyalty and then f**k me .. see where that gets you! Shelli and Vanessa talk about how Audrey set her (Vanessa) up. Shelli tells Vanessa she has nothing to worry about all of the attention is on Audrey right now. Vanessa says she is going to expose the 4 of us. Shelli tells her not to worry Jace is going to go off on her (Audrey).. its going to be a bloodbath.

12:45pm By the pool – Liz and Audrey are talking. Liz tells her your a$$ is on the line. Audrey says I don’t think so .. I don’t think people will believe him (Jace). Liz tells Audrey to lay low.

12:55pm Backyard couch – Audrey tells Jason that she feels hurt by him. She says that she put herself out there for them and no one did it for her. Jason says I just felt like in the moment I didn’t know what to do. No one else was doing anything and I was scared to stick my neck out. I honestly feel bad about it. Audrey says I just thought you knew what it felt like. Jason says I honestly thought it was a lot of he said she said. Jason says I’m sorry I didn’t. I told him to put the bible away .. you shouldn’t be swearing with it in your hands. I just felt like it wasn’t my place to say anything. Plus I don’t even know what I would have said. What you said was truthful. Audrey says I feel like everyone is taking advantage of him just coming after me. Jason says we’re locked in, we’re going to roll with you even if he says you burnt his house down. Audrey says I am just hurt because I was the one that brought the group together. Jason says I think everyone just felt awkward. I felt like if I said anything I would be the one with a black eye. I think all of this is going to blow over. Just know if anything like that happens again more of us will have your back. I just felt intimidated and I haven’t been intimidated in years. 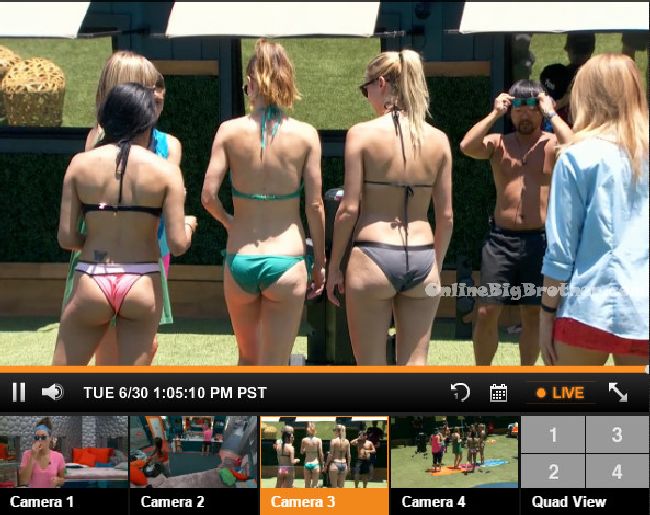 1:10pm More photos in the backyard.

In the bedroom – Jace fills Steve in on last night. When James comes to tell you it should be enough information for you to believe that he mistakenly put me on the block. Audrey lied to James and told him I was coming after him. Jace says James is going to explain he made a mistake. Do not talk to Audrey. She is a manipulator. She’s lied to everyonee. Even if I go out this week you need to stay away from her because she is target number 1. I really need your vote. You need to think about what’s good for your game. 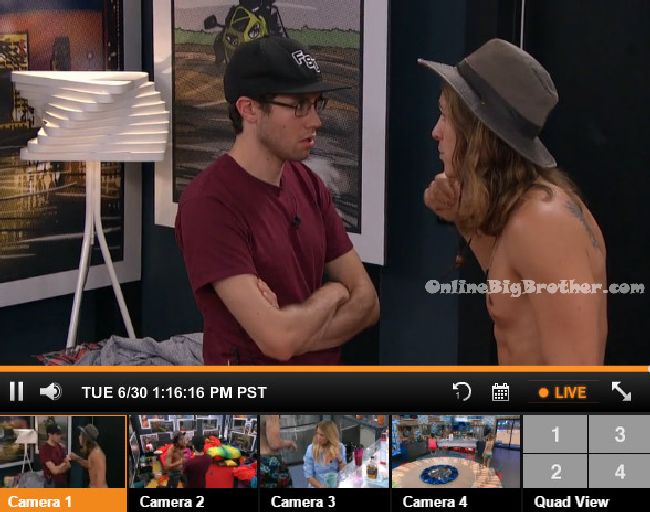 Live Feed subscription gives you CBS All Access thousands of archived shows. Live Shows like Big Brother, all the Big Brother Seasons, and 24/7 coverage of what is happening inside the Big Brother House. Plus there’s flashback that lets you go back to any second of the feeds and rewatch what happened. Simon and Dawg will index the season just watch the parts worth watching.
All this for $5.99 a month try it out 1 week free. Support our efforts and get your feeds via a link on this site. Live feed subscription Sign up

It’s just week one. My opinion changes about my favorites from week to week and I really dont have a favorite yet either. I guess its good that we have such a good cast this year that no one stands out yet to be horrible.

I agree with you. Something feels off with this cast and I haven’t quite put my finger on it yet.

its time for an ATTACK
Reply to  Alec15

time to call Zach Rance and get him to coach up one of the current HG’s. we need an ATTACK to put Audrey in her place. Zach would have totally done it, man, why did we get Amazing Race contestants instead of former BB players? whatever.

Vanessa cries too much.
Audrey is done.
Liz is a smokebomb.
Jackie is invisible.

(Wish Jace would stay over her)

Id rather be invisible than being the first one evicted. #embarrasing

Liz, what the Hell are you thinking? Why did you warn Audrey? Get her out of this house!!!

This eviction is going to be great, i expect that Jace will blow up shit during his speech and go out with a bang.

Liz is so beautiful, my god.

Now Day and Jason vs Audrey hahaha this week has been AMAZING!!

If we can get a good Jace vs Audrey fight and house meeting, then this will easily go down as the best first week ever.

any1 notice the twin switch!

Loved it! I love a witty smart-ass!