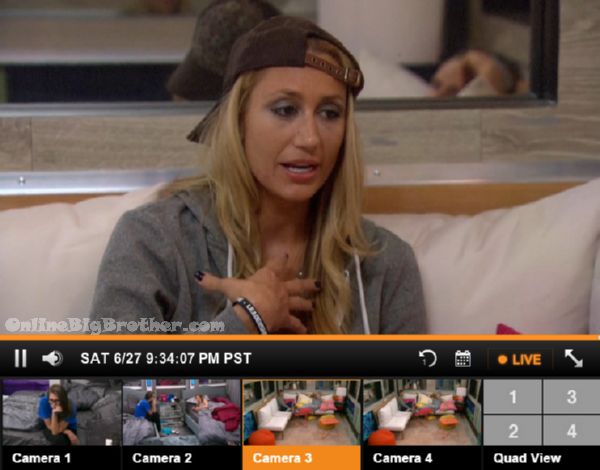 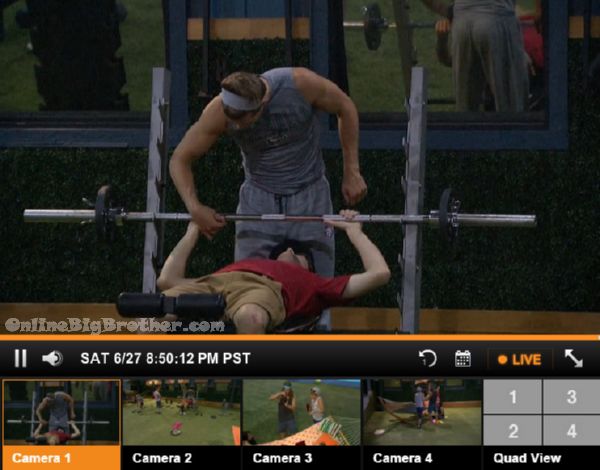 8:50pm Bros working out
Clay is showing Steve some exercise movements. Steve does his first bench press ever. 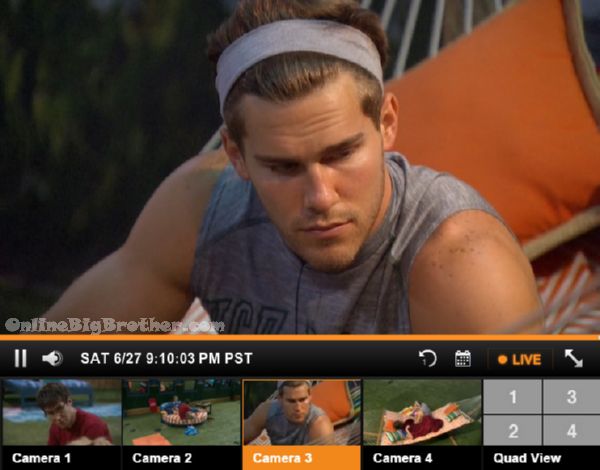 9:10pm Audrey and Clay
Audrey doesn’t trust Jackie any more, “I get a really bad vibe”. She’s down with getting Da out but her blood cannot be on her and Meg’s hands. They want to maintain the trust with Jason so someone outside their groups has to get rid of DA.

Becky says a lot of people this season seem to be into fitness. Says she doesn’t work out a lot at home. 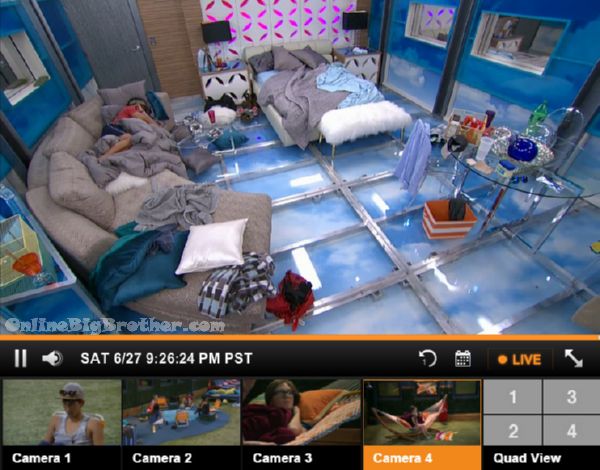 9:27pm HOH Jeff and James
Jeff says Jace was streaking at it was terrifying, “he almost ran into me”
James – what did he have in the front
Jeff – Some sort of hat
Jeff says it was weird because normally people would be cheering for him but when jace did it “Crickets”
James – weren’t they laughing
Jeff- well ya
Jeff thinks it would have been less awkward if Austin or Clay streaked with JAce, ‘He needed a wingman”

9:31ppm Vanessa and Clay
Vanessa says it’s obvious there is a big group that is protecting itself. Clay says he’s been approached to be in an alliance but it’s too early. Vanessa says the people want to have a big alliance “It’s too big”
Clay says she is one of the few he does trust. “Sides are being picked and drawn”
Vanessa says she doesn’t talk much game, “I need to be in a group very soon.. I’m the most loyal person”
Clay – where do you stand with DA
Vanessa doesn’t see herself working with DA in the game she’s too emotional.

Clay – who are you really close to
Vanessa – no one.. Shelli I’ve told the most to
Vanessa adds that she also like Audrey, “We thinks logically in a similar way” points out it is a trait you don’t see in too many girls.

Vanessa thinks Becky’s social game is lacking.
Clay likes her but doesn’t know where she’s at.
Vanessa says Becky has nobody, thinks it’s pretty obvious her, Steve and Becky are on their own.

Clay says he trusts Shelli, Jeff and her.
Vanessa asks about Jackie, thinks Jackie and Jeff are a package deal.
Vanessa is expecting a major blow up after the POV ceremony.
Clay says he likes Austin. He thinks Jace is a good guy but a liability. He also likes Jason but knows Jason is really close to Da.
Vanessa says she knows Sheli is trustworthy, she’s looking for a group to be in. Vanessa gives him her word she doesn’t talk game with DA. Clay thinks DA is trying to be the puppetmaster.
Vanessa thinks that the two of them with Audrey and Sheli can go far in this game.
Clay says he will try to deflect the target from her. Adds he hasn’t heard her name being used as a target yet.
Vanessa – Let me tell you straight up I don’t want to float
(in case you are keeping score Clay is still licking away) 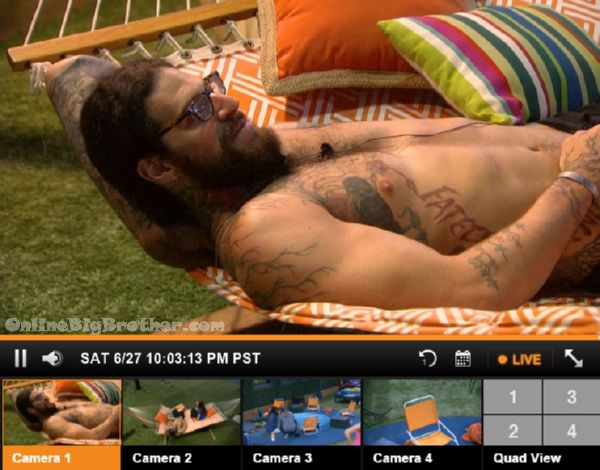 10:04pm Hammock Austin and Audrey
Austin says he had a really good talk with Vanessa like her a lot and thinks she’s trustworthy. Audrey feels the same way.
Austin asks her if she knows what is going on.
Audrey claims to not know says last she heard Jace pitched Jason to James. (Not even J names this season) 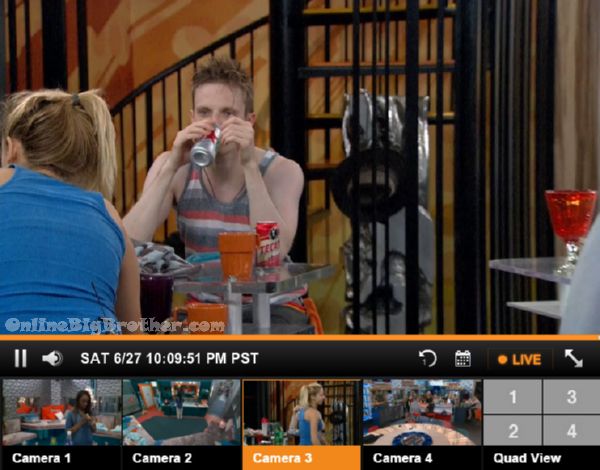 10:10pm Johnny Mac’s birthday is tomorrow. The houseguests get a bit of alcohol to celebrate. 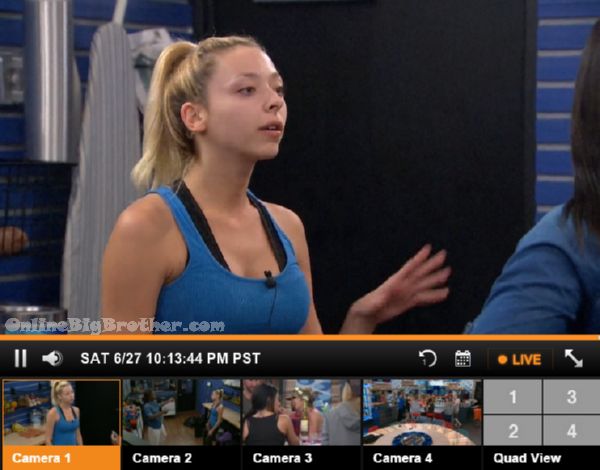 10:13pm Liz and DA Storage room
LIZ wants her to know if she wins HOH she’s not putting DA up. She wants them to be good.
Liz – do you feel you can trust me
DA – we’re good 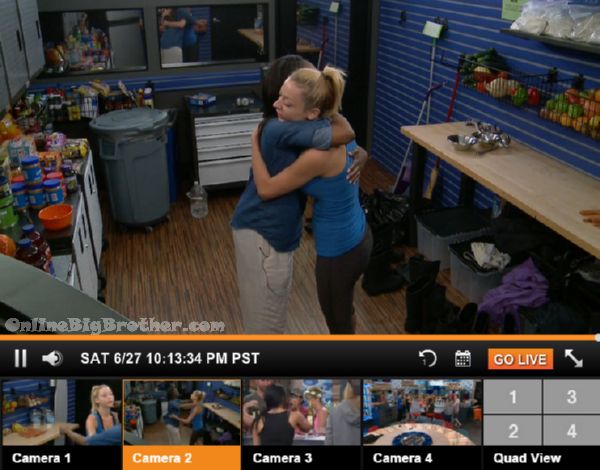 They hug it out.. 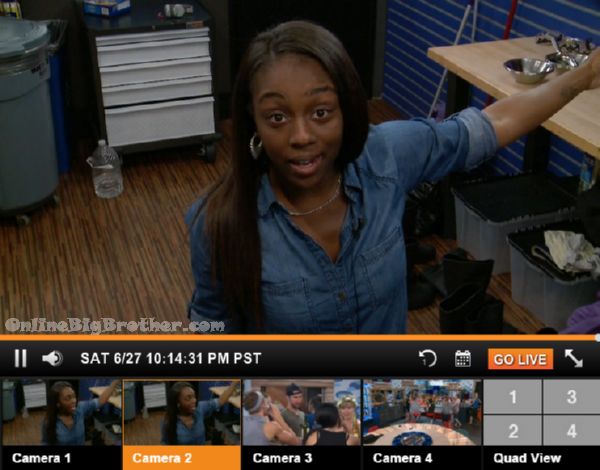 Liz leaves. DA says to the camera
She just sat here and Apologized to me but aren’t you in an alliance that is supposed to put me up for eviction next week. 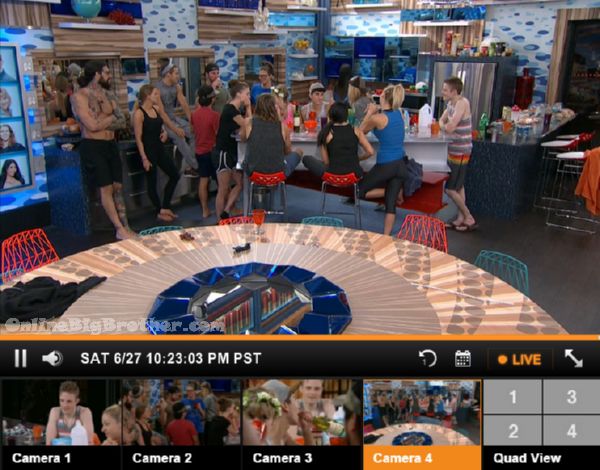 A pretty muted Birthday party. (5 beers and 2 bottles of wine)

10:30pm Audrey and Austin
They both have noticed Steve is eavesdropping a lot. Audrey thinks that he’s trying to play like Ian. (BB15 winner)
Audrey tells her Liz needs to start hanging out with different people. Tells him to talk to James some more points out that James and Jeff have been talking a lot today. Austin has noticed James is nervous. Audrey is going to C*ck block Jeff and James talk 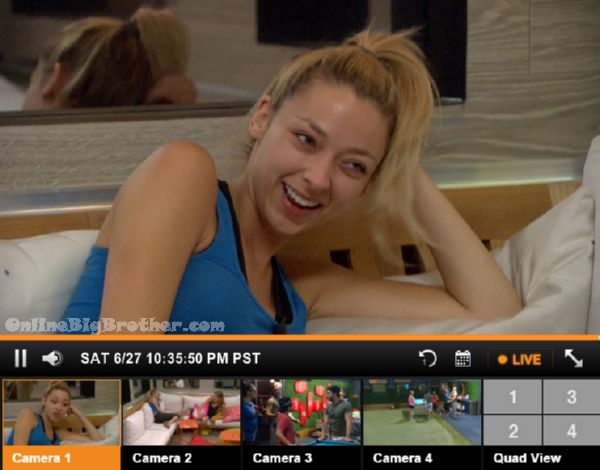 10:33pm Jace and Liz
Jace saying he’s into weed. Likes to smoke a blunt and workout and likes to smoke a blunt and f**k a little bit.
Jace – you saw my a$$ tonight how do you feel about that
Austin joins them says it’s all good he’s talked to Audrey she’s suggesting they start to mingle with the other players some more.
Jace calls the rest of the houseguests prudes.
Austin says James and Audrey are tight.

Austin – these people suck..
Jace – I’m the only person that smokes weed in this f***g house.. I’m the lonesome stoner.

(Sounds like Becky shushed JAce when he was talking about weed. He’s pissed him off. Also sounds like he got in sh1t for pouring what Becky thought was more than his share of wine. )

Jace is soooooo fucking cool. Too bad he’s getting the boot week 1. Nice gameplay you pothead. You and “Judas” ARE going to be booted early in the game.

Re-post. Nvm, it looks like I’M the pothead lol.

Your name makes me hungry !!

Johnny Mac’s BDay yet he is nowhere to be found…..Johnny Mac is like the illuminati, we won’t see him but he runs everything.

Also whoever gave me and others here crap for comparing BB16 to BB17 I hope they see the same thing happening. BotB has led to a huge alliance (I think the High Rollers are up to 7-8 HGs) starting the game off and if they win HoHs they can dictate the game. This season has some good HGs but also some duds (IMO Shelli, Becky, Vanessa, Jeff, Jackie)… The BotB needs to go soon!!

Don’t worry though we have the #IncognitoDentist Johnny Mac !!!!!

Sorry I accidentally posted without finishing. So if they sit back like Jocasta it’s a problem and if they’re active like Day, it’s also a problem. I’m just sick of it.

Someone please get Clay some chapstick. The poor guy is going to run out of saliva soon..

Dont throw around words like racist and then have the audacity to suggest that they dont cast anymore black women.
Just stop

I don’t like her either, nor am I a fan of Aubrey, I can’t stand people who play that way.
Guess James is anti-woman since he says there’s too much estrogen in the house and they need to eliminate some! LOL

Jeeeezus how to make everything sound overly dramatic…… “several” is actually just 1, and the alleged “racist” tweet is a meme he tweeted to some of his black friends…. To quote none other than yourself, “goodness just LOOK it up!!!” and don’t take everything you see on the internet at face value…

I like Da I don’t understand how she’s become public enemy number one. Audrey is the next Liza from BBCAN, she’s playing too hard too fast, I can’t wait till it blows up in her face.

Stop accusing people of being racist. That’s something that should not be taken lightly unless there is evidence. And not wanting to be allied with her is not an excuse as it clearly shows that shes his target.
We had that in bb15, not this season.

The twin is in action!

Just an observation but every time I read DA on the updates, my mind reads it as Duh or like the da in TaDa! I have to keep reminding myself that they call her Day.

Audrey is just all over the place. She needs to chill…it’s getting annoying and starting to hurt her game.

Da’Vonne makes me laugh so freaking much! When Liz left the storage room she was like “girl getcha yo life!” I really hope she can repair her social game and go through the motions. I don’t like being fake in real life either, but if being fake won me half a million I’d be fake all damn summer.

I appreciate Vanessa telling Clay he needs to hash whatever he has with Da out (Vanessa likes Da and Da likes Vanessa I believe). I don’t know about him being racist (I haven’t seen/heard him make a comment yet), but he’s starting to remind me of the Bruno/Sarah fued from BBCan 3. But seriously he is ALWAYS bringing Da’s name up. “Are you working with Da?”

If I had to guess, I’d say Audrey might be behind it. But whatever it was must have happened before the live feeds came on. I want to know what it is because Meg told Jeff and Jackie that Da’Vonne had a reason to be upset with Clay.

Jason needs to grow up!
Listening to him is like listening to a fowl mouth little 5th grade snot
I can’t wait till the door hits him in the a## on the way out
hopefully before jury along with Da

Lol found a new one every time clay licks his lips or when Jace and Austin talk about being cool time to drink up . I gotta say I’m starting to like Johnny Mac almost forgot his name since he is so stealthy lol and DA needs to be more aware that other people are targeting her which still baffles me as to why cuz she isn’t mixing the pot just observing

That looks like Liz’s twin! Look at the pictures of the two of them posted the other day and compare to the pics above. They have slightly different features.

You must be a liberal obsessed with race. How is he a known racist again?

Is it possible there are 2 twins playing? Donny /Johnny and Liz /Julia?