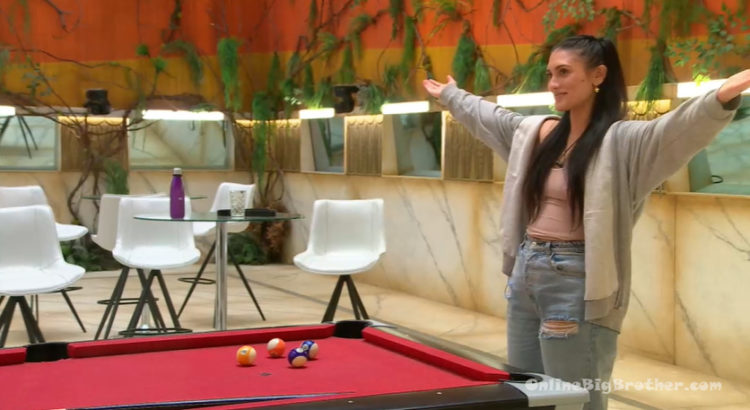 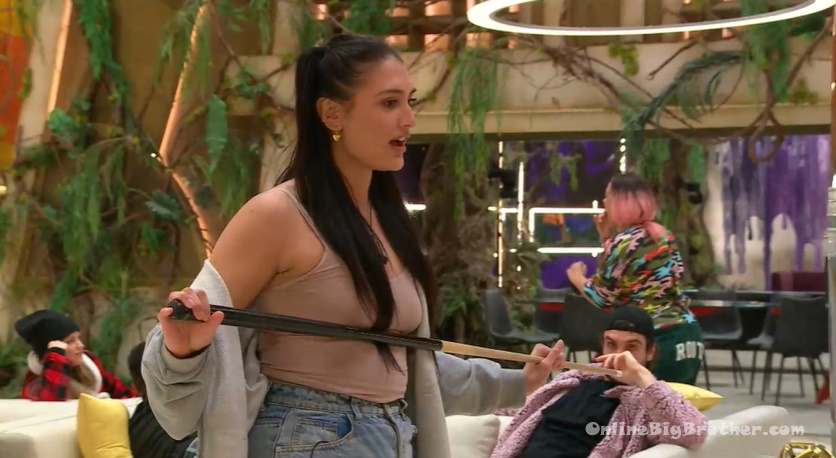 11:20pm Jedson teaching Austin how to play pool. He sinks the cue ball and then scratches on the eight ball and loses. (LOL) 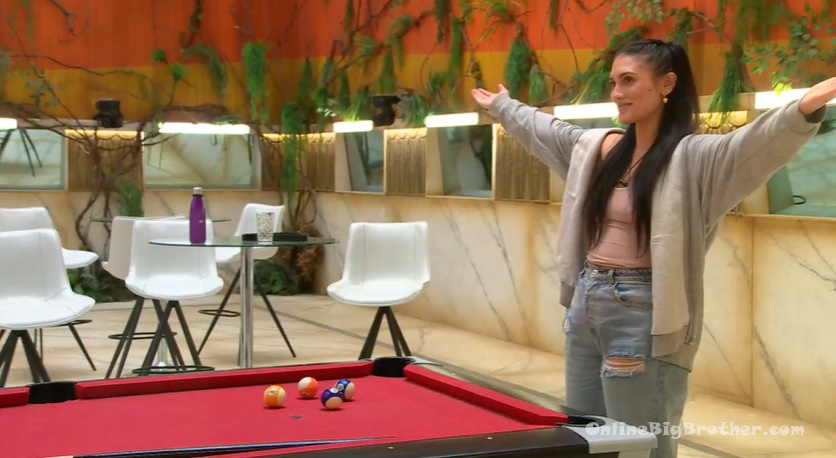 11:40pm The house guests are sitting around chatting about random things. Victoria talks about 100% starting a YouTube channel or podcast after BB. It won’t just be BB it will be about her life too. “That is going to be lit! I’m really doing it! So the podcast you see yourself or you don’t? And then where does it go? I’m doing it! I need to solidify the name.. Keifer suggested “whole lot of spice with spicy V” And I love “spill the tea with spicy V!” I am going to do it. I’m really excited.” 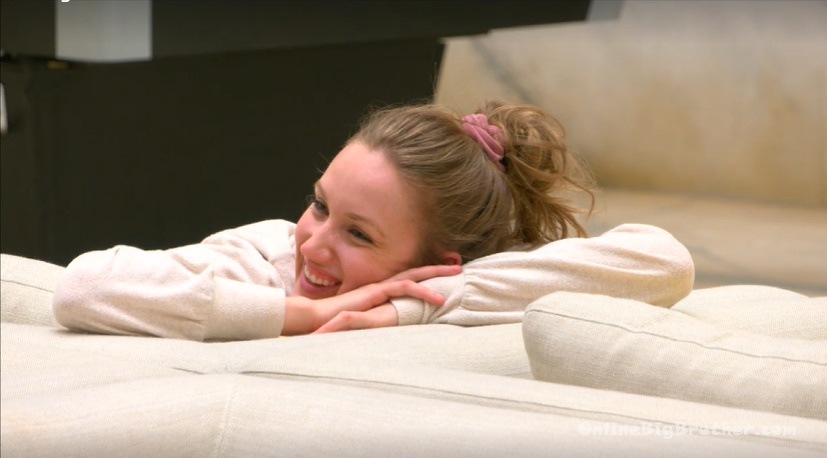 12:40am Backyard. Jedson, Tychon and Beth.
Tychon – we need to take out some people. I am just not sure how to go about it. The reality is, if its a bloodbath ..its a risk for everybody. We’re all susceptible to going home before we should. If we change the composition of the game to be a more .. lets get rid of the people in the middle and then play our game. That is a more reasonable approach for everybody because if we turn this into a bloodbath people are going to start getting picked off that don’t need to be. Jedson – I know. It just going to be very short term wins. Tychon – I know! Because if I win HOH and I put up Kyle and Ro.. and the next one if we don’t get it .. they put up you and Beth. You know what I’m saying! I just don’t want it to be that. Beth – and everyone just keeps riding through. Tychon – and people that are not involved just want on the side. And they look happy doing it. Jedson – I know! Its pissing me off a lot! It actually is! It really is annoying me. Tychon – like I am noticing the people that are just sitting back and like you guys fight! I am not having that. Jedson – I think we should .. if one of us wins .. we don’t put them up. Tychon and Beth – I agree. Jedson – we put up Vic. Tychon – she would go sooner than them. Jedson – Do we just put up two legit floaters? Tychon – potentially. Beth – I think I would put Tera up. Tychon – I think I would too. Beth – she is just getting under my skin. Like big time! Jedson – she won’t commit to anything. How long are you going to wait!? Beth – like we are going into week 4. Jedson – and she is playing the I don’t want to commit to anything .. its too early. Beth – which is weird because both of you have offered her something. Jedson – I fully did offer her. So I would have no problem putting her up. I would be like I offered you something and you haven’t come back to me with anything. Jedson – (wants to put up Tera & Vic). 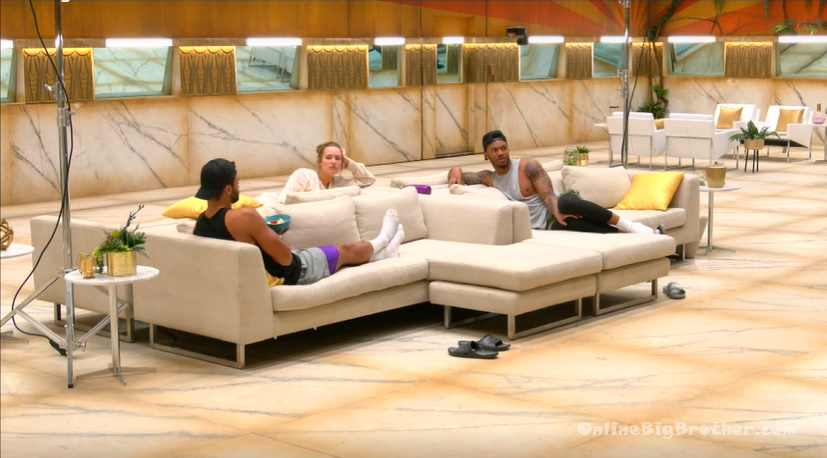 Almost noon in the house the feeds are down.

So the pre90 alliance was born this morning? Kief, Tera and Tina. The three in the house born before 1990.
i feel old.

Kiefer kiefed the details to Tina and Tera again. Said it was Kyle that followed LaToya room to room. It was Rohan in every retell by LaToya and Rohan. He wants to target Rohan because he never apologized. This was whataboutism to deflect from the 4 sunsetters that went en masse with the purpose of intimidating Vic. A plan Kiefer was all for in encouraging when he thought it would work to save himself AND LaToya
.
Rohan did apologize, it just wasn’t considered as sincere as Kyle’s. He went into the room and talked to Kiefer for a good half hour to start off the apology tour. Was it a good apology? Not really. But he did apologize. I believe he said he was sorry more than 10 times.
To be honest, knowing now that Vic told Kief to mope, Tina and Tera should put together that the reasoning that has been applied, that they kicked Kief when he was down is suspect. They kicked him when he was acting gets far less sympathy. and a BIG part of Kiefer’s strategy seems to rely on sympathy manipulation and being a broken telephone.

Honestly, Kiefer. Kiefer and his grudge. Kiefer, the same person that told Austin that Tina and Tera were also taking part in attacking him (yesterday). Kiefer, the person that had to expect a confrontation given he’d totally betrayed two players in the game that were still in the house after he took part in trying to create a flip to get rid of one of them. There had to be a confrontation when his lying was exposed. Kiefer was double agenting against Kyle and Rohan. Kiefer is sore that they confronted him (if I hear mean mugging one more time… uuuuugh).

What he’s doing: emphasizing effect to dismiss cause.

Is the Pre90 alliance sincere on Kief’s part? Nope. I doubt it completely. He’s the one that has created a Tina target. He’s the one that has been spreading misinformation about Tina and Tera. He’s a guys guy. No, his base personality and actions are telling me he’s not loyal to this alliance in the least. But by getting in with the two of them, he can talk them out of targeting Ty and Jed, and woe is me his way through getting them to go after Rohan and Kyle for him.

Protecting Vic? mmhmm. I see it as doubtful. When Ty and Jed talk about targeting Tera with either Tina or Vic, will he tell them? No.

Tina and Tera, for their part, are being a little facile here as well. They know that Kief has a loose relationship with the truth. But… they, in their ageism (yeah it can work both ways) and Tina’s borderline misandry regarding alphamales, are wanting to build a third option to make the middle a bigger say in the house. A floater alliance. Is that what we’ve just seen created? We’re all in on whichever side has power and more protection to offer us? It’s a floater alliance. I think this might be a new thing.

ASIDE when feeds return: LaToya (the woman lying about her profession and creating a backstory cover for the lie) is telling Ty and Kief she just can’t lie in the game. She’s lied. Even in the game. she’s lied. Okay, if i were on twitter right now, I’d get a million hate messages for that… but come on. she has. It’s part of the game. She’s playing the game. I just don’t like how she’s being so holier than thou about it.