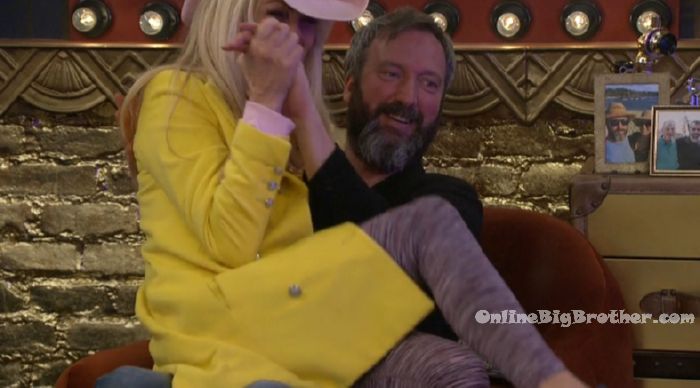 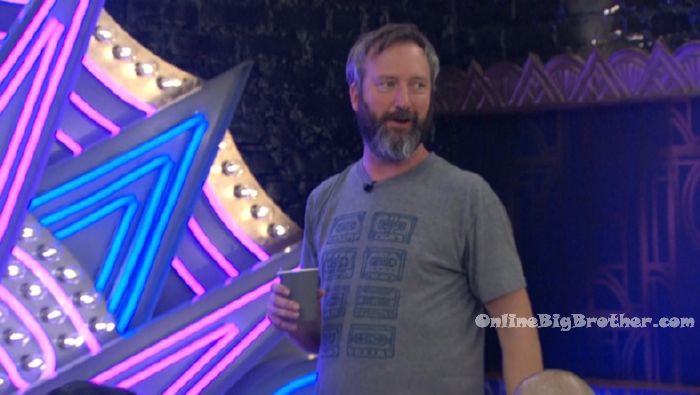 8:50pm HOH room wine party continues… Tom offering up his wine to the other house guests. Tom – the party’s started now huh?! Get the party started! They talk about tv shows like Game of Thrones, Downton Abbey, etc..

10:10pm Bathroom. Joey and Tamar. Joey – honestly man we’ve got to get it together. The energy has got to go! Tamar – I want to make sure everyone is on the same damn page! Its a lot of back and forth for me. Its a lot of stupid meetings for me. Joey – I know. Here’s the deal! I’m on the page so.. if it goes not my way and I’m out of here.. I can leave saying I had that moment. I gave it up and that’s it. If people were disingenuous about that moment, I can’t help that. That’s my human thing trying to control it. You know what I mean?! (No I have no idea what you’re talking about!) Joey – so if I go, I go. Tamar – same! 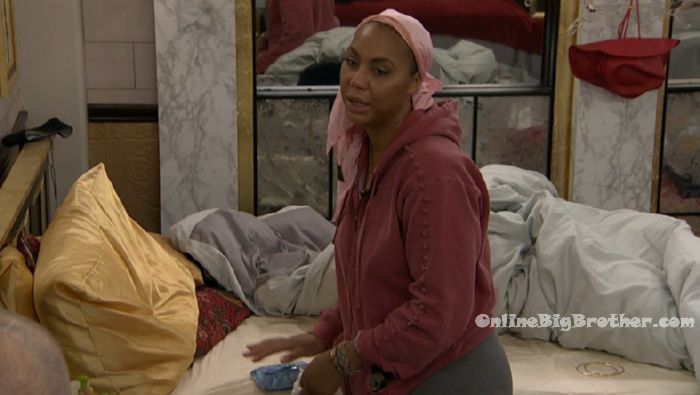 10:22pm Backyard. Dina and Ricky. Dina – I get the game. And when I voted with the Kandi thing. I knew she was going to be safe. She doesn’t give a f**k. And you’re good player so.. BYE! I won’t f**k with that. She is a really good competitor and I told her we’re going to be friends outside of here. I’m not going to worry anymore about oh she’s sad.. because .. you’re playing me. Where is the alliance? Where is the .. and I’m not calling it emotion at this point. I am over that! Its a game! But she’s playing. BIG TIME! But so is Tamar and so is the other two. They’re just going to pick them off like BAM BAM! It depends on who has the power. Ricky – who do they want out? Dina – they want Joey off.. that’s what I think. I don’t know. I haven’t heard but its kind’a captain obvious! Someone’s got to mess that up .. because the games’s got to end. They’ll control everything. We’re the ones that are the deciding votes .. we’re floaters. What do you think? Ricky – I don’t know who to trust. Dina – its a game now.. now I’m in! No hurt feelings. 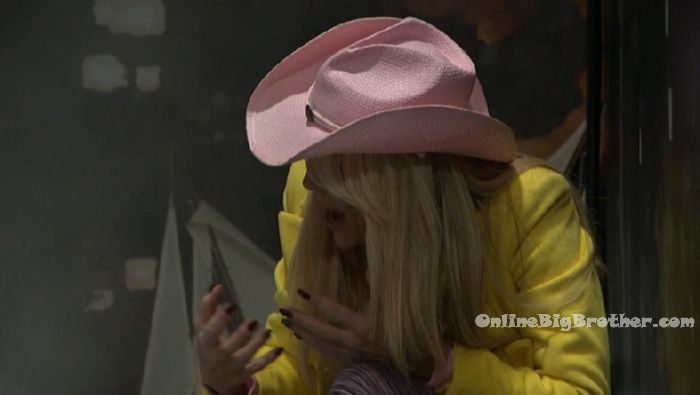 10:44pm HOH room. Tom and Kato – Dina is with Ricky and opening up about everything.. saying I don’t trust these girls.

11pm Lounge room. Kato and Tom. Kato – Kandi is in the shower. Tom – this one? Kato – yeah. That makes me feel a little bit better. I think I’m ready to talk to her. Kandi is so delicate because she has been with them a lot.. Tom – what is the worst thing that could happen that they told everyone that we told them? Kato – nothing. Tom – they get mad at us? Kato – yeah. Are they going to change their plan? Kato – they’ll just get mad and say you guys blew everything. Tom – blew what? blew that fact that you’re lying to us?! What’s their alternative plan if everyone knows .. what do they do differently?! The power is going to come out.. someone is going to get taken off the block. And I’m going to be able to put up whoever I want. Kato – yeah. Or the power won’t come out and Joey or Kandi go home. Either way we don’t want to work with them anymore. Kato – right. Kato – if the final four really was you, me, Joey and Dina.. that would be fun. Tom – oh yeah. 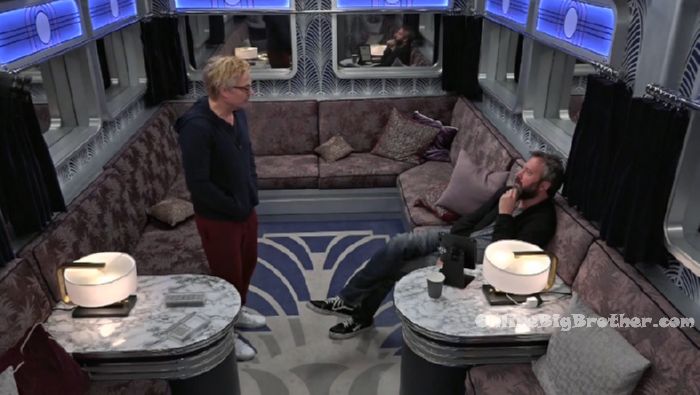 11:20pm Lounge room. Kato to Dina – if I told you the truth that you’re protected .. would you believe me? Dina – tell me. Kato – I’ll tell you tomorrow. Dina – no, now or never! Kat0 – if you act different, we’re screwed. Tom told me I’m not supposed to tell you because you don’t need to know. If I told you that you’re protected .. would you believe me? We have a plan to get our alliance that I’m in.. Dina – what is it? Kato – I’m not going to tell. Dina – its all or nothing. 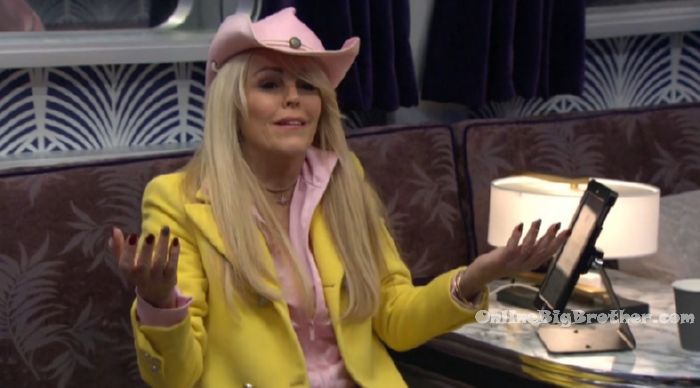 11:22pm Kitchen. Natalie and Lolo. Natalie – I don’t like the way they’re playing that game. Lolo – I want to be like .. you do know I’ve only tried in one competition.. right!? Natalie – f**k you Kato. Natalie – its hilarious that Dina told me that they’re trying to turn Ricky. Lolo – I can’t believe you heard that. 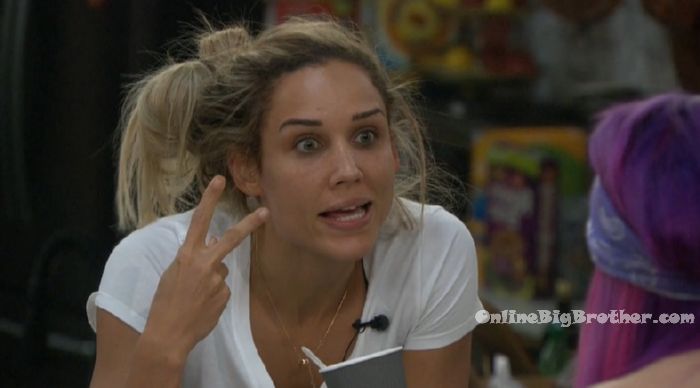 12:10pm HOH room. Kato, Tom and Dina. Tom – do you want to know our little secret that is blowing up in our face right now? Which is hilarious! Dina – yeah you took the girls side and now they’re jack’n you. Tom – no.. well kind’a yeah.. something like that. Dina – but who warned you about that?! Ryan and Jonathan. Tom – Ryan and Jonathan never wanted to work with us. Dina – And who warned them!? Me! Kato – don’t you think Tom and I know that they don’t know that they’re pulling the wool over our eyes? That’s what I didn’t want to tell you. Tom – they think we’re still in an alliance with them. Kato – they don’t have any idea because we know we got’em. Dina – how do I know that you’re telling the truth now.

OOOPS! Dina was in the HOH room with Tom for ages. Downstairs, Tamar, Lolo and Nat were wondering just why she was up there for so long.
Tom sees Ricki coming upstairs. Dina runs out of the HOH and into the gym.
Ricki comes into the gym. Dina pedalling like crazy on the eliptical. Ricki says * Are you OK?
Oh, yeah, says Dina. I’ve been on this for about 20 minutes.
They go downstairs.
Ricki tell Lolo Nat that Dina was in the gym
What..the girls say. She hasn’t been in the gym at all. And it’s almost 2.00 am.
Ricki says…(WAIT FOR IT). He says…well, here’s what happened. Tom saw me coming up. I heard the door open and close. i SAW Dina enter the gym. LOLOLOLOLOLOL.
Nat is laughing. And ricki says. : Yeah..told me she was on the bike for 20 minutes.
Dina may be toast soon. But she may not remember tonight :)

The feeds tonight were SO fucking hilarious!

Drunk Dina was spilling the tea.

Kato’s game is DONE for lol.

I can’t wait til they are both on the block together next week.

If Kato or Dina doesn’t win HOH the best case scenario for them is one wins Veto and the other goes home sitting next to Dina.

Tom’s paranoia is really to blame for their downfall. The power really went to his head. What a sad downfall this will be.

I have said that every season. The houseguests worry about the powers too much. If I was playing BB next season I would try to use that to my advantage.

Dina is drunker than a skunk tonight

I like Tom, but I liked him better when he was an osprey. Just sayin’!

Yeah, Tom got some serious HOHitus

I think Tom would do better without Kato. I’m not a fan of Kato at all after this latest dramafest.

With the bullying going on, I’m feeling for Tom and Kato :(

From my perspective, it sure seems like the intimidation and bullying goes both ways. It’s just not okay for anyone. Shameful.

I don’t watch, but read every word here… I like this cast much better then the cast last year. I put a quarter in a jar each time I find myself rooting for Kato as a punishment, but I am going on vacation when the season is over ! Thank you for the updates, I couldn’t enjoy Big Brother without you!!

Your Welcome Franks! .. Man I find myself rooting for Kato sometimes to .. I’m going to start a jar :)

I wish I could give this season a full treatment it’s been fun.

KATO really needs to win the next HOH!
LOL

Huge blowups ! Simon and Dawg will report so I’ll leave it alone. Except to say that I don’t like ganging up, and even though Tom and Kato haven’t been my faves, Ricky and Lolo are being spiteful and vindictive.
Tom and Kato, I did Like them to start with. But Jonathan and Ryan were great and Ryan was backdoored with no shot at taking himself off the block.
Even so, I know that’s the game.
The bullying going on now to Tom and Kato is NOT gamesmanship.

I have a huge post coming but it will be late to hit the presses :)

I know it will be GREAT ! Planning on doing my donation this evening. A bit more this season as it’s not as long as the normal seasons but you have to work more with so much going on :)

The gameplay that led to Tomato’s demise:

Tomato is toast and with their gameplay, Ray Charles could see it coming.

I can not stand Lolo, she’s always going on about people’s anger when SHE is the one who gets enraged at the drop of a hat. Yelling today “YOUR A F***ING PSYCHO TOM, F*** YOU”. Ricky mr.mediation always starting arguments too.. bananas

I can’t stand Lolo or Snakey Ricky….. I’m getting some cold ones for the feeds tomorrow night bc it’ll be hot! Wish they would have kept Ryan…….Tom & Kato could have had a good shield….. the Nolo & Ricky show is giving me flashbacks to Jeremy , Arya & Kaitlyn…. Lolo otb will b sweet and cray

Omg kandi is going home in a tie breaker. Remember that

So happy the final 4 is over. Natalie is the only one in that 4 that id loke to make it to the end. A perfect final 4 will be ricky, natalie,joey and tamar. Actually i will love for kandi to be therer, but she is out .(or joey )

Nat is playing a very good game. My final 4 would be Nat, Kato, ( I think he really needs the $$$ and he seems a nice guy) Joey ( I’m pretty sure he will moan about something if he wins (:) and I’m OK if Tom is in final 4. ( He’s also a nice guy, and he has toppled a bit…but he wants to win and or have a lot of time on TV..and I give props to people who REALLy came to play)

Awwww….Tom just told Kato that he misses Jon and Ryan. That they were so nice. Yeah, it was the right game play to evict the popular players..and I’m still a bit miffed that Ryan didn’t get a chance to play in Veto :(
But…It really gets my goat how awful Ricki and Lolo are. (angry Face)