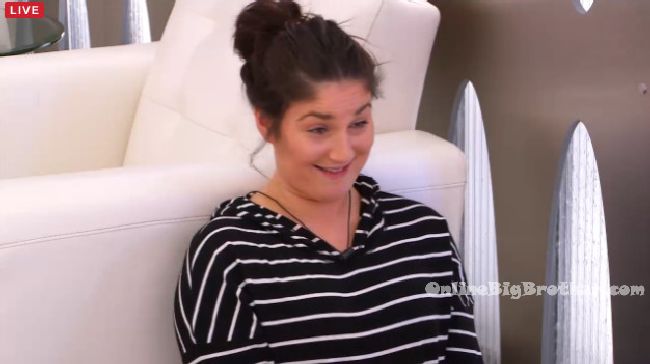 4pm – 5:20pm Big Brother blocks the feeds. When the feeds return the house guest are back inside the house.

By the havenot room – Cassandra asks what can you offer me? A bite of your sandwich is a start. No one has campaigned to me? Raul says Kelsey already has your vote. Cass says no she doesn’t, she just assumes she has my vote. At the end of this week there will be 9 people left. Raul says if I tell you something you will go tell them. The only good thing that is helping you right now is that you’re good with everyone. The thing is people forgive but never forget. Cass asks that I voted for Dallas? Who’s pissed at me You, Jared, Maddy? Rual says that’s something you’ll have to find out for yourself. If I go this week then you’re next. Raul says I just want to plant the seed with you, you’re not dumb. Cass asks why would I be next. Rual says just think. People think I hate you and we will keep it that way. If I stay we could work together. If I stay I’ll be working with the underdogs. I’m not working with the top dog any more. I’m here to make new deals honey. There are 3 people that are next after me and I’m the glue that can keep them together. Cass asks who are they.. me and? Rual says he can’t say. Cass says I can’t keep you if you don’t tell me anything. Rual says he’s going to do his final blitz tomorrow.

Tim says I am at a real loss this week as to what will happen next week. That’s why it might be good to have a majority vote. Tim says that Cassandra argues and goes back and forth. She eventually comes around. I will have to think about it but I might be interested (in making an alliance with Maddy and Ramsey). We need people that if you’re on the block people would win the veto for you. Ramsey says I’m the type of person that can do that. Tim says that he trusts Ramsey. I’m all about the players that can reinvent themselves in the game and you and Maddy have done that. Ramsey says if there are any road blocks with working with Maddy… We haven’t discussed even having an alliance together. Tim says its more that I’d want to get through the game without making an alliance. Tim says my only thing weird is where do people like Nikki fit in.. Big Brother switches the camera to the bedroom with Joel and Cass. Cass tells Joel we have to get Maddy out tomorrow (with a double or a triple eviction). Cass tells Joel that she was by the high roller room and Big Brother kept saying stop that. I think something is going on in the high roller room tomorrow.

In the HOH room – Tim tells Ramsey lets chat tomorrow. If I get HOH you and Maddy are not who I would put up. I feel like this last week we did work together and I won’t forget that this week.

6:20pm – 6:30pm Ramsey tells Maddy about his conversation with Tim about working together. Ramsey tells Maddy that Tim told me to come up and talk to him tomorrow after the HOH. He does want to work with us. Ramsey says he is going to end up working with us. Maddy says that’s good right! Ramsey says we just need to know the things that he values so we can keep showing him that. What I worry is that he wants you to win the game more than me. Maddy says yeah he does. Its just because he likes that I’m making moves. And once you do too, he will see that. Ramsey says his goal to is not to win but to get to finale night. Ramsey says I knew I f**ked up when I said I want to work with you (Tim), Maddy, he was nodding and then I said Cassandra and he stopped. I should have just said You, Me and him.

Tim about Cassandra She can go hungry tonight! Someone else can feed her.

6:55pm In the storage room – Ramsey talks to Phil about voting Raul out. Phil says he’s leaning towards that too. Ramsey asks is that what Tim was saying too. Phil says its all like theory. Weird speculation, its hard to put into words what he even says. Basically he was saying for strategy its best to keep Kelsey.

7:05pm In the bedroom – Nikki asks so you think voting out Raul is best? Tim says yeah. Nikki tells Tim think of how much cleaner this place will be. Tim says with Kelsey and Maddy still in the house they will continue to go after each other. Tim says Raul says he has some bombs to drop .. he’s all talk isn’t he. 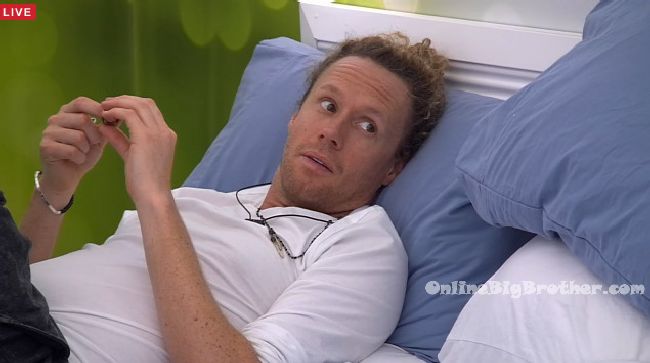 Don't worry no one see's you as a physical threat @bigbspoilers #bbcan4 pic.twitter.com/kenzb6jZZ3

Want to watch the rest of big brother Canada 4 & all of Big Brother 18?
Sign up for the 6 month plan with HideMyAss VPN.

Either triple and single or two doubles. Just guessing though!

At big brother Canada, we’ve decided that tomorrow at the live eviction were just going to eliminate everyone, but Cassandra. We figured it’s easier to just give her the money than to hope the other houseguest a do.

Nikki would be an amazing HOH. I would love to hear her vent about her thought process etc. Although she would probably do a weak move and put up 2 girls, it would be interesting to see nonetheless.

that
Reply to  me

u want to vote nikki for hoh just to c wat she’ll do. don’t waste ur time, u might as well vote for tim, he’s the one making all the decisions for her nowadays.
this seasons such a piss off with these paid international reality stars taking spots that should b reserved for canadian (super)fans

Episode revision for the week #1
The Mitch explosion caused Maddy to nominate Jared and Kelsey?
Totally negates the deal on feeds made Thursday night between Maddy, Kelsey and Jared.
Totally negates Nikki lying and saying Jared told her she was this weeks pawn nominee, making Maddy think the Thursday night deal was a sham.
Oh. Good thing there’s been so many booze deliveries this week we can all just assume we were beer goggling.

Raul is a dumbass…he has barely talked game with anyone this season, except for the third wheel. Now, he magically expects the house to keep him. People are using the same old line, and Raul is no exception, I’m not coming after you, I will you keep you safe, blah blah.

Sorry Raul, you should’ve developed relationships, outside of Barbie and Ken. Now they whether save each other than you boo boo. That’s what you get for solely relying on a showmance.

Revisionist history episode moment #2:
They’ve left out Raul telling Kelsey and Jared he wouldn’t use the veto on Jared if he won it, and the subsequent guilt and prove your loyalty that led to Raul helping Jared win veto, hoping a pawn would go up as he’d been led to believe because Maddy told him he wasn’t going to be nominated this week. Or maybe that’s just a feed delusion caused by watching Raul bounce on that damned ball for six hours.

Episode Revision for the week #3:
That the spin the bottle game wasn’t suggested by big brother, instead it was drunken hormones taking over.
That Jared kept saying no kissing no nudity before going skinny dipping with the boys before he went to the hot tub.

Exactly…these revisions make it seem like I’m watching two entirely different shows! I understand that Big Brother doesn’t want to televise just how heavy handed they are in manipulating outcomes, but when you make it this obvious, you’re insulting the intelligence of the regular live feeders. And Spin The Bottle…Really! What are we all 12…maybe they should take turns pairing up in a dark closet! What I would give to watch one BB season with cerebral, life-tested adults…some blue collar, everyday folks [preferably 35 and over] dedicated to the game instead of such frat house frivolity; I recognize that opinions vary, but I can’t help but think that production needs to go back to casting professionals [ie. writers, teachers etc.] and forgo party boys & wanna be models….it may be booring to some, but I’ll take 2 intellectuals strategizing over a chess match anyday. I neither like nor dislike Jared, but at least his aversion to Spin The Bottle showed some modicum of maturity, even if it was just a ploy to hide his emotions. Is it too much to ask for a gritty, grim, hard-nosed, warlike 3 month tactical campaign devoid of drunkedness, juvenile flirtations & hollow showmances…the ideal BB season would marry the harsh ugliness of Survivor with the House confines.. I wanna see players grow from adversity and a winner forged in fire….high school hormones & college campus antics only cater to the lowest common denominator; as a Canadian, I would prefer that we be represented with a little more perseverance & steadfast sophistication.

Im really starting to like Cass’ game the last couple weeks… and Joel. They are probably my favs to win.

Ramsey is stepping up his game

I believe Ramsey has a better shot than Cassandra

I vote for the bros! Would be really interesting to see who they would put up. This would show who they are truly loyal to.

In the name of God please please CHOOSE JOEL. He has been the most loyal person in the house THUS far and deserves this. He sticks with his people even when its not favorable (eg. loveita, dallas).
Dont CHOOSE Nikki, who will end up putting up Cass and someone else last minute, prob two girls.
Dont choose Ramsey because that means maddy has 2 HOHs (she calls the shots)
Dont choose Jared/Kelsey because their heads will explode thinking Canada loves them.

Whats left is Cass, joel, brothers. I prefer Joel though

The wildcard is that Canada gets to vote for who they want to win head of household. Ahhhh please vote for Ramsey

i agree, chase, cassandra has been doing a lot for someone who hasn’t won anything

I would urge everyone to go to the bb can site and cast your votes. finally, canada has a say in who gets to be HOH, not entirely, but we vote for two people who then compete in some way. I voted for cass and joel, simply because it will ensure joel’s safety and i want to see what cass has to do as HOH, because after all her scheming and backchanneling, and friending with everyone, she’s going to have to nominate two or three (if veto is won) and reveal her intentions for the first time

also would be the only thing she has every ‘won’.

I can’t decide who to vote for? Can we have a poll?

I can’t decide either. Need some suggestions.

Who do I vote for along with Joel?! Help!