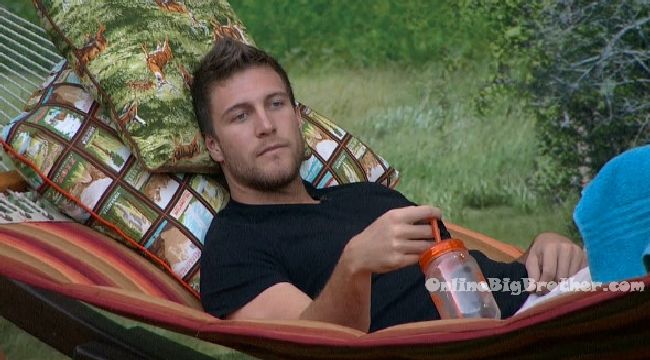 7:20pm Backyard – Corey and James are talking. James says he told himself he wasn’t going to get into any kind of showmance but…. ahhhhhhh dude… she’s kind a growing on me! And she’ll be like in bed staring at me. Corey says you’ve got hearts in your eyes. I cuddled with her the other night and she made a comment to me .. I was like I’ll leave and she grabbed me back in. I was like I don’t want you to get mad or nothing but I’ll leave. And she was like don’t hurt me. Corey says wow thats serious. James says yeah I don’t know how to take that. We cuddled in bed again today. James says you and Nicole are cute. Corey says I just don’t want it to have any backlash on the game. I know how much this game means to her. I just wouldn’t want her to get put up next to me and her get kicked out. James says keep it innocent flirty, just don’t hand out all the time. James says I’d put up Paul and Bridgette… then hopefully someone wins the secret thing and puts up Tiffany and we vote her out. Corey says Tiffany needs to go because she is already getting out of our little circle. James says she knows about it though that’s why we have to do it secretly. Michelle joins them. Corey says I’m nervous about Frank wanting me to throw the HOH. Michelle says Frank is getting close to the other girls. He’s giving those girls advice ..like telling Bronte to come out of her shell. To get on their good side. Michelle says I would be fine being HOH and sending Bronte home. Michelle asks who would Natalie put up. James says whoever I say. Not to be cocky or nothing. Natalie doesn’t have any targets. Michelle asks do you have any advice for me? Corey and James tell her to keep doing what she’s doing. James says don’t flip to the darkside. 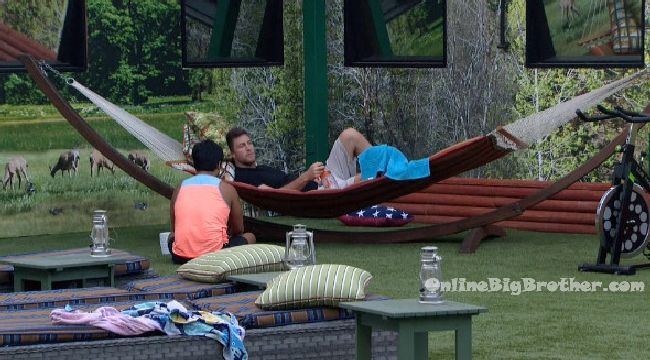 Paul has been so much more likable ever since Jozea got evicted. He’s actually a good dude. His head just got wayyy too big when he first got in the house & it was because of the self proclaimed “messiah”. I’m actually pullin for him now. Hopefully he stays humble & cool with everyone even if he wins comps.

He was a really bad influence so I’ll definitely put a lot of the blame on him. Especially now that Paul is a completely different person ever since he left.

Stop crying tiff tiff it’s played out like your hats

I think you’re giving him too much credit. We saw how he acted when he felt safe and in control…now we’re seeing him vulnerable and powerless. Some guys are way better losers than they are winners….

Whats up with Nicole and Michelle saying its too soon to get Frank out? Seems like every year players say that and it ends up coming back to bite them in the ass. When you have the chance to take a threat out u take it other wise you’ll be the one walking out the door sitting next to Julie.

I think we have to remember nobody is privy to all the conversations like we are. We see Frank talking too much, but they know the conversations they have with him, and even with others telling them things he says, they want to believe he’s lying to those people, but to them he’s honest.

And even if they think all the reports are true, why are they sticking their necks out when they need not worry about Frank for at least a few weeks? Why are they throwing away the potential protection he’s offering, even if it’s shaky? So what if he has final deals with everybody as insurance, better to follow his plan now evicting those that are not allies and be safe for a month, then get rid of him.

And finally if the pitch to evict him includes the need to do some elaborate backdoor, because he’s a great campaigner and a veto machine, and even then the vote margins are thin and relying on votes that are shaky….how is that convincing? Michelle likes Frank…and wants him to be her male partner to the end. Nicole sees an easy final 4 path with Corey and Frank as insurance policies. If you’re not offering a better deal beyond are girl supergroup, of course it’s too early.

Because absolutely no one is targeting Nicole or Michelle (or DaVonne) right now. That means the last thing they should want to do is flip the house upside down.

BB is a marathon, not a sprint. Nicole and Michelle have the correct read on the situation. We just watched the last two seasons as Derrick and Vanessa both: 1) patiently put together an alliance, and then 2) methodically dismantled the opposition. That’s how you get to the end in this game — NOT by making “big moves” in week 2-3.

DaVonne can probably get Frank out, but Frank will spend his eviction week telling the other guys that the girls are teaming up against them. Then when Paulie, Paul or Corey wins HoH that Thursday, guess who will be going on the block?

Another thing that could mess up whole get out Frank thing is that Day gets mad when Tiff starts looking like she the one running it. This why Day doesnt want Tiffany as HOH. They have the votes. Day wants to get all credit if Frank actually goes and if she even senses one bit Tiff is in control she will blow the whole thing up.

Day is lying her ass off to Tiff about what she was saying to Frank when she knew Frank was gunning for Tiff. Day actually steered Frank to not trust Tiffany. I don’t think Tiff is buying all that Day is selling. Tiff already knew Frank wasnt on her side.

At the beginning of this conversation (James, Cory, Michelle) I thought James is so attached to Natalie and so far out of the loop he has no idea what’s going on with his alliance. Shortly into the convo, when Michelle and Cory started talking about what Frank says, what Frank wants, what Frank is and isn’t willing to do, James got a little heated that Frank is only looking out for himself, not pulling his weight in the alliance, asking them to throw comps and be pawns but he isn’t willing to do it himself and that’s a sign that Frank doesn’t trust them. Hmmm, methinks it might not be so hard to get James to flip on Frank, especially if Natalie gets in his ear and whispers her approval of the plan.

Breaking out the white board and markers. I can’t keep track of who’s zooming who, who’s in a real alliance, fake alliance, playing solo. I’m surprised they can.

I think we are about 7-10 days away from seeing better fireworks than anyone saw last night…Hopefully for a good ole BB10 Week 4 breakdown….that would be epic

Nicole is so disappointing this season, I thought she learned since BB16. Clearly not! She is like Andy the rat. Someone tells her info and she spills! Very frustrating to hear her say, “its too soon”

I would never say those words if I was in the bb house. Not after Helen lol

Which, your right, is what Andy did in his season…. but it seemed to work out for him didn’t it

He's Getting Crushed
Reply to  RAY

Frank flunked his Paulie-graph, James called him out, Corey calls him shady, he’s got no guys left. If he’d stop slapping the girls stomachs & butts calling them fat, dead rat hair, chubby, hussy, farting in everyone’s faces. If he’d stop lying to everyone at the same time assuming no one talks. If he’d stop announcing his Final 8,6,4,2 deals telling Day & James they aren’t even in his Final 8. If he’d stop yelling at everyone, controlling who eats what, who gets to speak, even idiots revolt. He says they’re not doing buy-back, while the house can’t wait for Victor to beat him. Worst game ever plunging on HG Rankings, Evel Dick & Boogie says he’s screwed up big time & his so-called GF broke up with him. Other than that, he’s great as he ever was, and that’s why he’ll be first Vet out. Feeds show it all, while he gets the Production golden edit on scripted episodes, the button boy can’t switch to fish fast enough.

CindyWithanesse
Reply to  He's Getting Crushed

Simon & Dawg, what are you going to do if Frank gets kicked out of the house??
If you pulled out your coverage of Frank in the last 3 posts, you would have 4 paragraphs remaining….. 4.

Da’Vonne and Tiffany could become the centre of drama. I dunno someone always steps up.

I know it won’t happen
But I wish that Bronte
Was going out
Instead of Victor.

I kind of want Nicole gone now, she’s not really in the game just trying to make friends with the guys. I would like to see zak do more and I wanna know where paulie really stands with everyone

Man, I wanted to like Davonne but she is a terrible player.

Getting Frank out next week will make three things happen, all of them bad: it will galvanize the guys against her, it will make the remaining vets look vulnerable, and it will remove one of her few allies who can actually win comps. And that’s if you even get him out, which is not easy in itself.

Absolutely no one is gunning for Davonne right now. She is nuts to want to flip the game and go after a big target. It might make good TV but it’s terrible gameplay.

You’d think Da would’ve learned something from her season…right? Nope, not a thing. She’s a hot mess. She needs to sit back and pipe down a bit or she’s gonna be one of the next 2 or 3 out. All it’s gonna take is someone like Michelle running back to Frank and she’s public enemy number 1.Up until this point she wasn’t anybody’s target. She’s making herself a target by inserting herself in the topic of everyone’s conversations, saying Frank, Frank, Frank, let’s get Frank out. A cpl days ago it was Tiffany this Tiffany that. Lol. These people are pretty dumb, but not that dumb. One of them will catch on. Sooner or later & she’s a goner!

Nicole’s shtick is just like. Right? Can we swap out her and Corey for two houseplants? Less whining and more charisma.