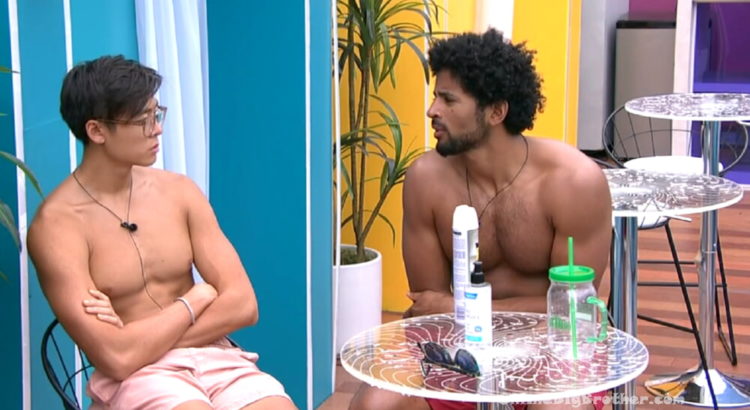 Big Brother Spoilers – Brent’s leaving and is still clueless. A lot of planning out next week. Sounds like Kings + Whitney are all possible targets. Feeds cutting a lot again. 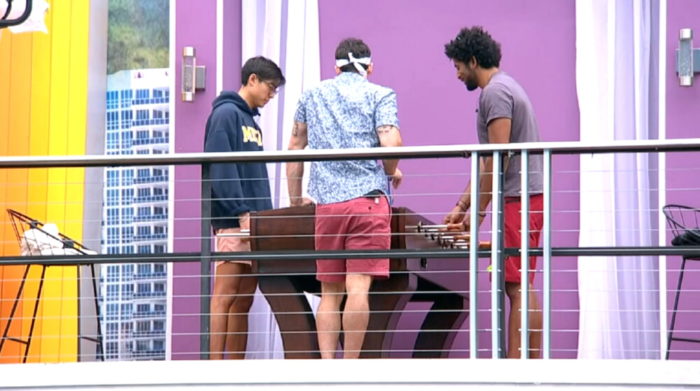 1:14 pm Brent, DX, KY
Brent – what’s up guys.. He took the bait. Now Alyssa doesn’t trust him at all now.
Brent – Alyssa told me legit as soon as she woke up.. So Alyssa’s loyalty is towards me which we got so much information.
Brent – X can’t play in the HOH we win we put them both up (Chrisitan/X) Get rid of a big threat and then we control the whole house and we have Alyssa..
Ky – And Alyssa controls Christian if he wins OH
Brent – no one is going to suspect us now. Even Alyssa doesn’t suspect you are working with us Ky
Ky – oh really.. wow
Brent goes on about Alyssa coming to tell him first thing “She didn’t even pee first.. I’m telling you that’s loyalty”
Brent – We’re running the house, Brit goes home takes away one of their numbers
Brent adds when Brit goes home the jokers will go after X because he took out Brit.
Brent says he’s playing it up that he’s nervous and pacing around the house
BRent – we’re in a good spot
Ky – if the jokers beat all of us in the HOH
Brent – we’re the jokers
Brent – this might go down as one of the biggest moves so early in the game
Brent leaves.. 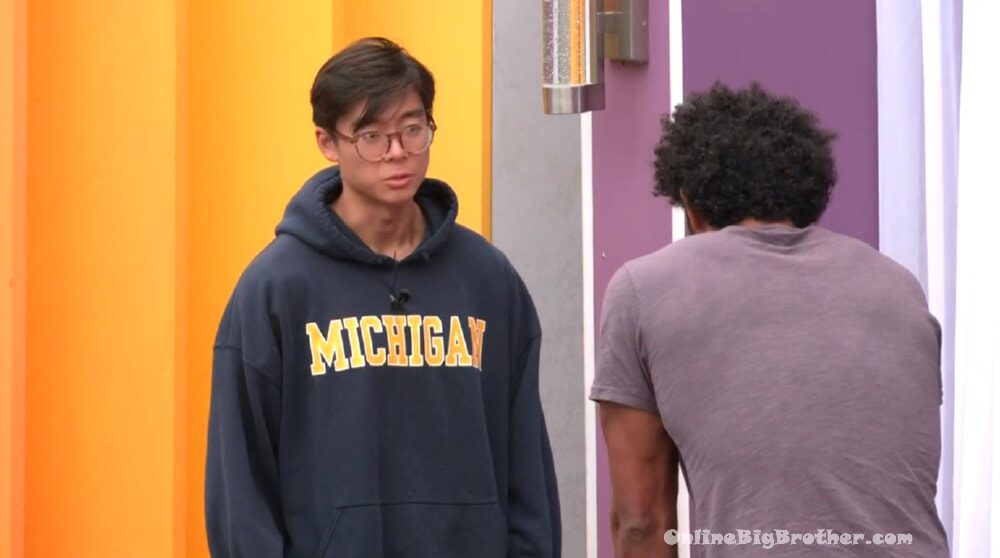 DX – what I was trying to say about Tiffany. I do trust her a lot but a lot of people trust her a lot
Ky – I know
DX says when he was going around with the GOPRO he asked them who is America’s favorite and more than 50% said Tiffany.
DX – I think Tiffany is playing the strongest Social game right now. She has a lot of strong bonds and a lot of the house really likes her
KY – F***
DX – If the opportunity came for her to take a shot at one of us two. If she knew she was going to a final four between us two and Claire she’s not going to let that happen.
Ky – 100 percent
Ky – anyone else we can bring as the third.. in case Tiffany Claire split at least we have this third person they don’t?
DX – Hannah, but the people Hannah is closest to is me and Tiffany
DX – BIGD, Hannah, Azah, Whitney..
Ky – look at everybody. I Wonder about X. A third or a fourth even? X and HAnnah
Ky says X knows he can’t beat Alyssa/Christian in the final 3, They’ll pick each other. Alyssa at the end of the day will win over Sarrah Beth 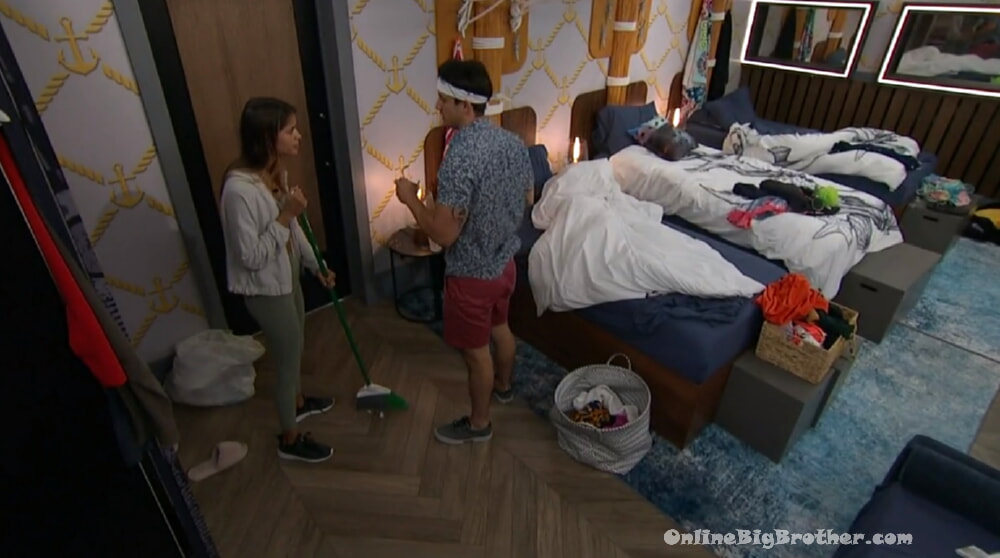 1:30 pm Brent and Alyssa
Brent – I’m pretty sure X intentions are shifted.. I’m pretty sure
Alyssa – why do you think that
Brent – I have a feeling. I think he’s biting I think he’s going to try and persuade you and Christian to vote against me
Alyssa – there’s no way he can persuade us to do that..
Brent – don’t be surprised..

Alyssa leaves..
Brent to Camera – I almost did something that wasn’t smart it’s hard to keep everything neutral 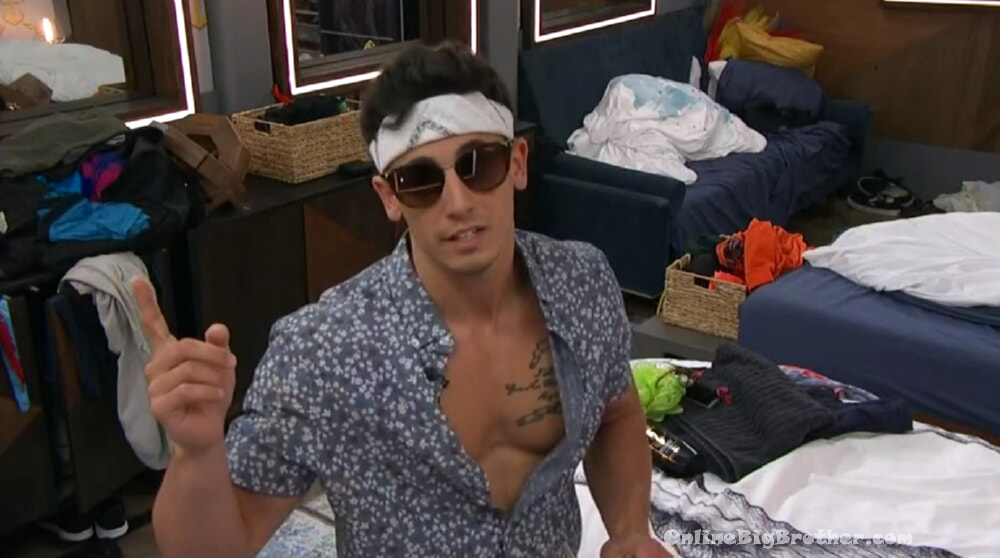 1:38 pm Brent to camera
Brent – Right now everything is going according to plan nominations stayed the same. Xavier is biting, Xavier can’t compete in the next HOH. Alyssa’s allegiance is with me now she told me straight in the morning what has happened upstairs last night and that was the first thing she did. Now I can trust Alyssa. Christian is allied with Alyssa he’ll do whatever she wants. Right now I’m looking Squeaky clean and safe. The Mafia is under the radar. We have the vote. It f**ing worked.. 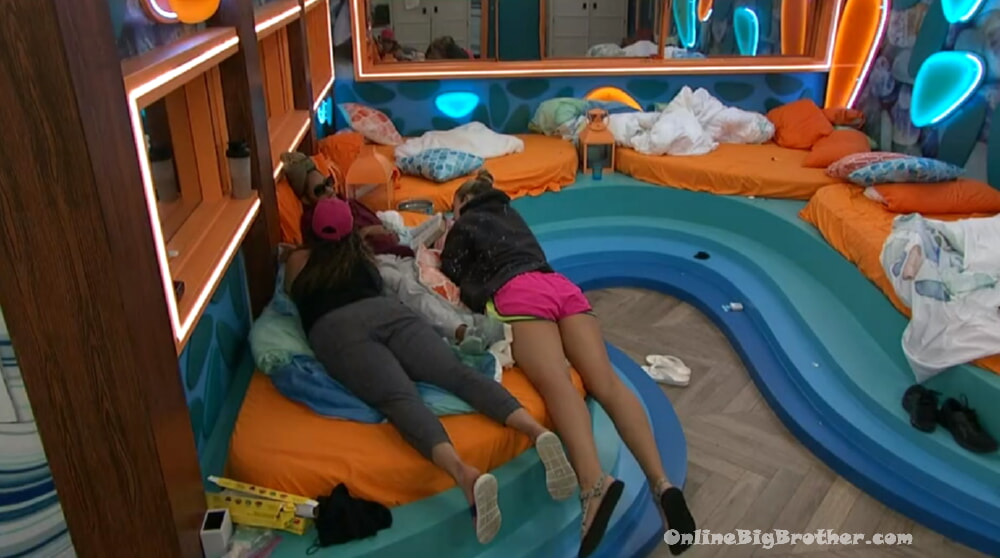 2:10 pm Tiffany, Claire and Brit
Brit going on about being 60lbs heavier than Alyssa and almost beating her “By 2 whole minutes” in some compeition.
Tiff – who is a direct threat
Brit – you are close to Christian.. who is interfering with you getting all the information’s from him?
Tiff – Alyssa
Brit – Correct. She is also playing a real good social game. She at some point needs to go
Brit now talking about the veto they just played and how if she faced against Whitney she would have won. “Brent Barely beat me out”
Brit to TRiffany “so for you, it’s Whitney/Alyssa”
Brit to Claire “You have a little bigger of a target pool because he’s have been throwing out your name left and right
Claire – I know wish I knew their names.
Brit mentions Brent. Feeds cut
Claire says she doesn’t talk game to Christian, Doesn’t talk game with X. Only talks some with SB
Brit – you can easily put up Chrisitan.. or you pull a backdoor.. You put up X and Christian on the block. One of them wins the veto put Whit up.
Brit – I know Whit’s influence is a lot in this house.
Brit – you have a four-person rock-solid team they make it to jury
Tiffany – you’re screwed
Tiff – anybody who watches Big Brother knows not to keep a duo in this game. To keep a QUAD
Brit – every team has a strong male taken out
Brit – you’ll have to use Alyssa as the pawn if one comes down. 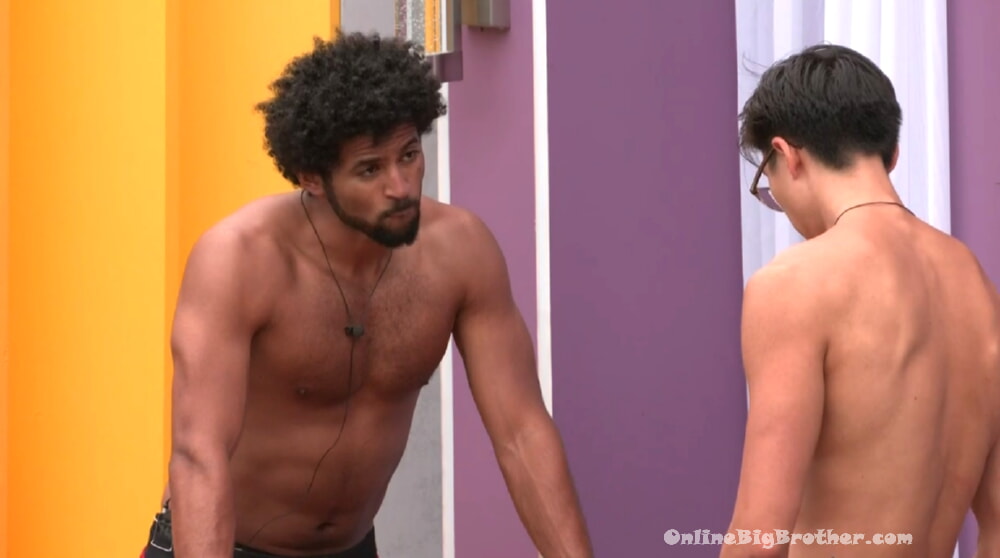 1:58 pm KY and DX
They’ve taken off their shirts and continue to talk about people they want to have final 5,4,3 etc ..
Ky saying he’s down with SB
DX – Claire or Tiff
Ky – A bit Tiffany

Kyland says the people he doesn’t want in the final 6, Christian..
Feeds cut.. When we’re back
DX – for me, Hannah is a perfect person to bring. I trust her a lot and she can win comps but we can go head to head with her it’s not like she’s going to blow us up. Christian will blow us out of the water.

DX says the only people he has full trust with is Kyland and..
Ky – Hannah?
DX – not even Hannah
Ky – Tiffany
DX – maybe but after what we’re saying now.. I dunno
Ky – but does that Eliminate trust?
DX – I don’t lie to Azah I just omit details if I told her she’s safe that would be the truth

DX suspect Britini’s nominations would be Kyland and X
DX says the one thing about Brit is if she says she’s loyal she means it
DX – just knowing her personality type she’s just so passionate
DX – when you look at Britni do you see her who would play a game lying?
DX to her family is everything
Ky – you know Dan? she reminds me a little bit of Dan.. in the wholesomeness. I remember he said.. In 14 that’s when he got into trouble.. he lost that was the bitter jury. it was because he used the wholesome view from 10. 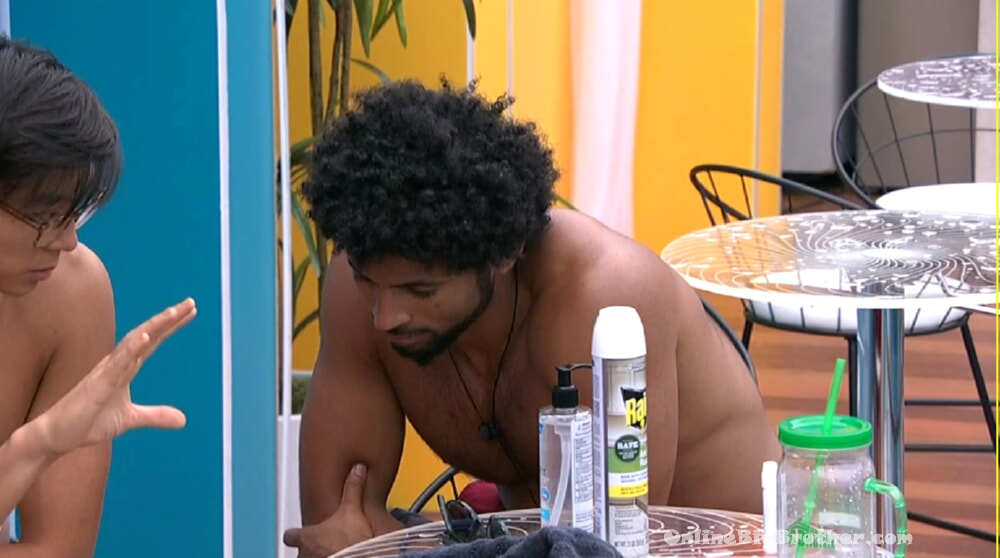 2:29 pm
DX – Today at the veto I could see them using it
Ky – 100%
DX – Honestly they could just f* it to the royal flush throw me up there let the house choose
KY – I don’t know why
DX – I don’t know why.. we’re playing a game I don’t know who they’re talking to. Everyone is thinking ahead.
They wonder if Brit and Whitney are really as close as they thought.
DX says Brit told him he thought Whitney was like her older sister.
Ky is going to talk to brit tonight and see what she says to him about Whitney
DX keeps going on about how loyal Brit is but you have to reach “that top tier of loyalty”
He mentions how last week Brit told him if one of her teammates went up in her place then don’t use the veto.
DX – when you look her in the eyes.. you can feel.. it feels real.. I don’t get Dan Goosling from her
DX asks how do 8 person alliances typically collapse..
Ky says sooner or later one of them gets taken out goes back to Season 20 and how Foutte was dismantled.
Ky – F*** I can’t remember..
Feeds cut..
Ky – With a guy going out this week. It’s highly likely that the jury will have more girls than guys
Ky – another reason why I would have BIGD in the jury.
DX – that’s fair.
(Feeds cutting a lot again)

Bros still planning out the next 8 weeks. Kyland says he they bring Azah to jury he feels like they would have her vote over the other girls.
Kyland – Their fight feels very real.
Ky – Tiff said I don’t want Azah to get to Jury because I know there’s nothing I can do to get her vote.
DX – ohh let’s definitely bring her
DX – the red flag I had on Tiffany, she is really really good at lying
KY – and she’s good at not saying stuff.
DX – she’s just great at communication. She doesn’t give great logic I think she seeks out people to offer her strategy or tips about strategy the thing is she’s really great at communication and getting. Once she knows what she wants someone see she will get them to see and Feel.
DX – She gets people to feel things very deeply Chrisitan feels he can trust her. Hannah feels like she can trust her 100%.
DX – Claire is in that list.. I’m concerned that Hannah, Tiffany and Claire have something going
Ky – definitely
DX – Hannah tells me.. I think Hannah trust me more than TIffany and Claire.
Ky – yesterday Tiffany and Claire were not saying the same about
Ky says they want Hannah they were just trying to make it look like they did 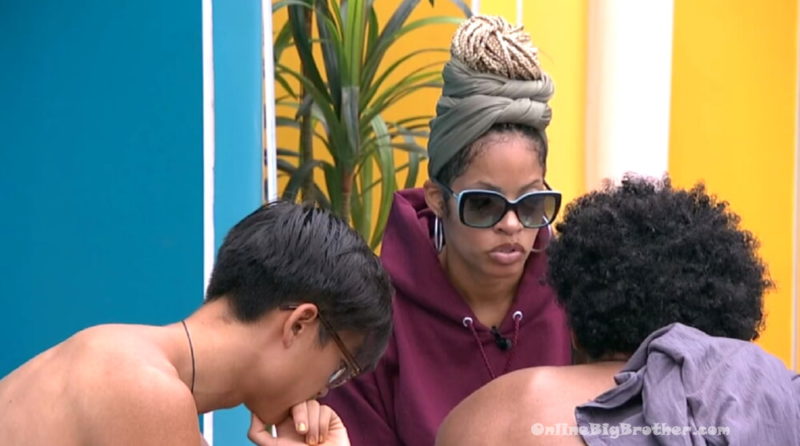 3:06 pm Tiffany, Kyland and DX
Talking about who they would put up if they won HOH. Tiffany says from what she’s heard everyone is after the Kings.
DX – why do you want to win HOH
Tiff – I don’t
DX – why not give it to Alyssa what changed?
Tiff – just weighing all the options.
Ky says they already knew everyone was after the kings, ‘Whats new”, Tiffany didn’t know everyone was after the kings she still thought Whitney was a target for some.
DX – you are saying everyone’s target is a King it’s a good time to take a shot
Tiff – No I’m not saying that
DX – I’m thinking out loud at the things I’m hearing..
Tiffany is worried about Duo’s in the game.
Kyland lists off a bunch of past duos that don’t make it far.
DX leaves..

If you like these spoilers please consider a donation to keep the madness going. We accept donations via paypal How to support OBB

Oh my gosh, how is Brent this clueless?!?! He’s going to feel so humiliated once he’s voted out, especially if the goodbye messages are brutal.

Do you get the sense that Kyland is too honest sometimes? He just told Tiffany that at times he feels like she is holding things back (which of course she does)

I need a history lesson because of Kyland’s comment of “Part of the game is managing a bitter jury”. How many have successfully done that? I know Paul sure didn’t

So torn, I feel bad Brent is getting gas lit by the entire house and wish somebody would just break it to him but it will be such great TV watching his face with a unanimous vote against him.

I think after this week, most of the players will be seeing some lines drawn when the nominations are exposed. While some players are obviously on the bottom, they are still important enough to protect because some group needs that vote. With the alliances and connections of varying strengths we may see the next HoH have to do some fast talking to explain why their ally’s plus one is on the block.

We are running out of large group consensus targets.