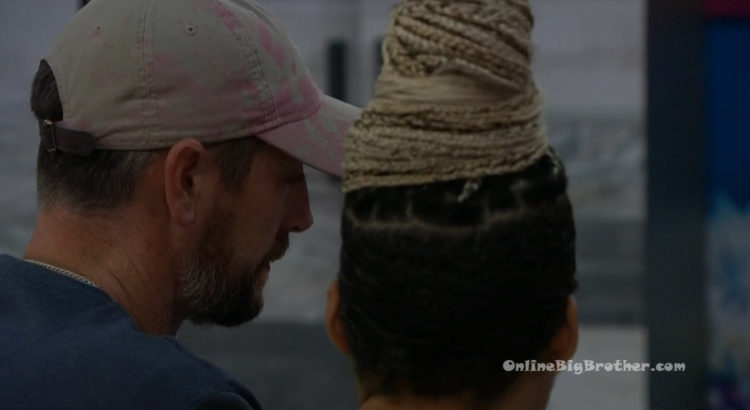 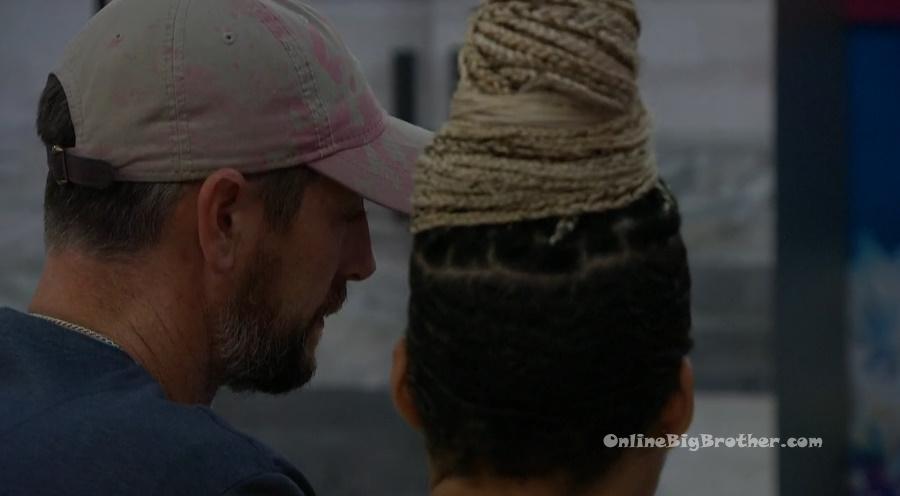 9:25pm – 9:40pm Bedroom. Tiffany and Frenchie.
Tiffany – you carry a very powerful presence with you and that is probably the case in any room you walk inside and outside this house. That in its self is a threat to everyone in this game. Frenchie – yeah. Tiffany – people don’t want to sit next to you. Frenchie – yeah. Tiffany – you just have a very powerful presence. You are a very strong leader and I think many people realized the power that you had within the first week of your HOH. And it is very hard for you to hide that. Frenchie – it was. Tiffany – it is not an insult to your game. It is honestly just the opposite. I would love to have you here. I think that you are just so powerful and people recognize that what are their odds of making it if you’re here and everybody is following Frenchie. Frenchie – MMMmhhmmm. Yeah I didn’t even think about it like that. Tiffany – anyone that doesn’t come swinging at you is hypnotized by you. Its not an insult to your game. You came in here with your head up, you leave with your head up. You really should compliment these young adults that they realized they did not stand a chance sitting at the end with you. It is not an insult to your game. Frenchie – my main thing coming in here was that week one. From watching BB21 and flipping my coffee table because I was so pissed off and being like this needs to change. And my wife looked at me and said you want it to change then go change it. Tiffany – it is not okay to display that type of gameplay. I think if you weren’t in this house no one else would have said it. You were the person that came and opened everyone’s eyes and said what everyone needed to hear and you said what no one else would say. So thank you! Frenchie – I’ve always got your back. I love you to death! We built a strong strong friendship in this house. I’ve got your back for the rest of my life. I promise that. You go get these kids. Tiffany – you are a boss, you are a player. You are too powerful in this house! Frenchie – you’re gassing me up. I came in thinking I would be so different from everyone else. I am going to blow up my game to you. I had my core four. Me and Big D built a strong bond. Me and you built a strong bond. Azah, even though we fight like cats and dogs. I will always have her back. And yes, Sarah Beth. Those four I would have done anything for in this house. Tiffany – you made a lot of promises that I think you wanted to uphold. Frenchie – looking at the key box, I didn’t realize I would only have 6 options. I had already told people don’t worry about it .. and then I had to worry about it. Tiffany – one thing I think we all learned is not to make promises you don’t know if you can keep. Frenchie – I knew as soon as Ky got HOH, I was up. It was a smart move on him. Tiffany – I don’t want you to feel ashamed of anything. Frenchie – I don’t. There is no bullsh*t now .. this whole cast will embarrass you now if you do. 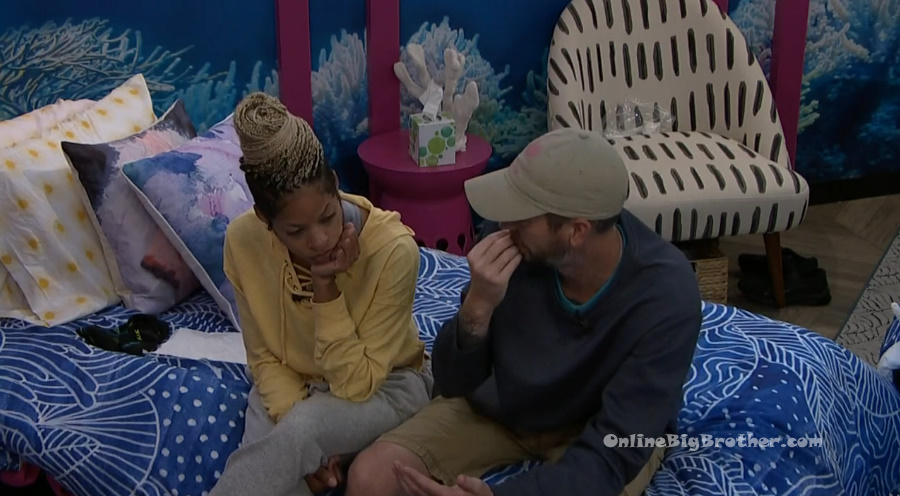 10:15pm Bedroom. Hannah, Claire and Tiffany.
Hannah – that whole alliance upstairs .. the mafia .. that’s fake. Right!? Tiffany and Claire nod yes. Hannah – okay. Now we’re on the same page. What is interesting is I spoke with my team this morning and me, Derek X .. and Whitney was like I can’t stand Brent. And Derek X and I were like we didn’t know where you stood which is why we didn’t pull you aside yet. Tiffany – do you trust her saying that? Hannah – I do because she was the one initiating the conversation. She said I am throwing the comp and I need you two to throw it to a different team so he (Brent) can be put on the block. 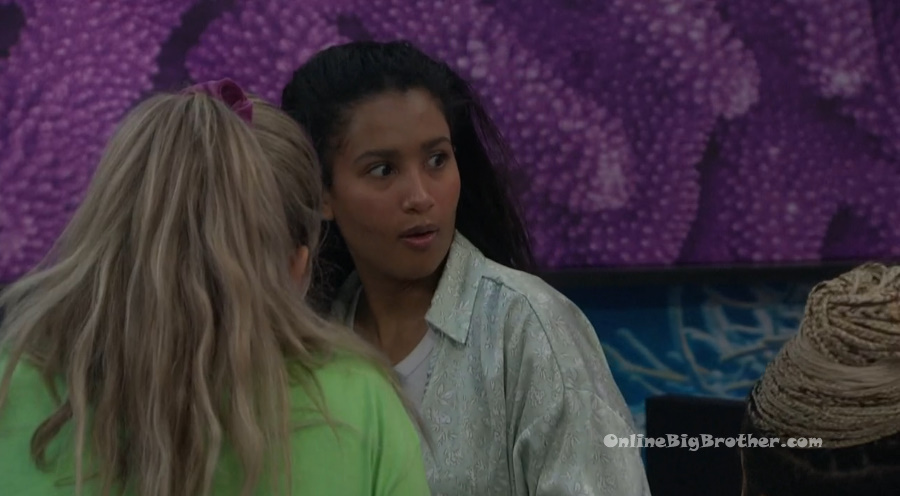 11:15pm Christian and Alyssa pretending to play chess.. just in case someone walks in.

In the bathroom. Big D talks to Britini about not wanting Frenchie to go out without a vote. He says he would like either he or Azah to throw Frenchie a vote. I know its nerve racking. Britini – I am afraid of a twist. Big D – there’s no power or extra votes. 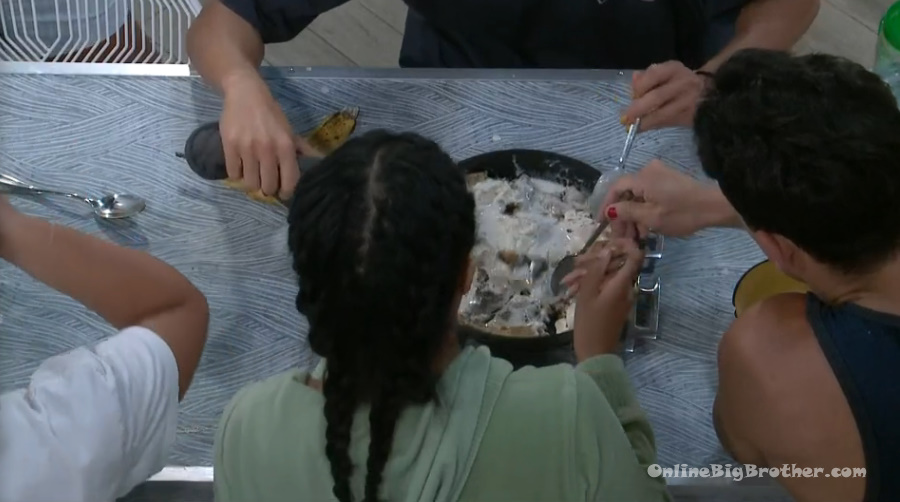 1:30am – 2am HOH room. Kyland, Whitney and Hannah.
Whitney – when we were in the kitchen he (Brent) was complaining about the pizza being cold .. and I maybe was a little too b***hy said Brent what did you do?! You can’t complain when you haven’t done anything. Hannah – and I was like oh Brent are you going to contribute to the dishes today? I used to be the only one that would wash his own dishes. Whitney – but then he was like I’ll put you on the block and I was like I know you will. He was like just kidding but seriously I would have the numbers to do it. Kyland – oh WOW! Whitney – he is so cocky. He doesn’t talk to our team about anything. Hannah – team Aces are still fine with Brent because of Alyssa. I am going to be real ideally I would like Claire to win (HOH). Brent has thrown around her name. Whitney – he keeps saying we need to target women. And he kept making up lies about Azah. Kyland – what are the chances of him not wanting to win. Hannah – we had that conversation this morning .. he said that he feel so protected and said maybe I don’t want to win. In the off chance that Brent does win, we will do our best make sure Claire doesn’t see the block because we are serious about working with you guys. But he is very adamant its that its Britini, Claire Azah. If Britini pulls herself off Claire is going up. Kyland – I don’t understand why he would put Claire up and expose himself as a liar this early. Whitney – you would think so. Hannah – but he is adamant about those three leaving .. because of the wildcard if Britini and Azah are able to be safe .. what are his other options. Whitney – basically the only time we want to win (HOH) is if its up against the Kings or Brent. Other than that we are more than happy to let someone else win. Kyland – it is hard for me to listen to women.. I probably need Brent to explain this better. Whitney and Hannah laugh. Whitney – He is such an man-explainer. Kyland – if Claire wins who would she put up? Brent and who else? Hannah – and possibly someone from the kings, Christian or Alyssa. Kyland – what does Brent say about me? Whitney – he doesn’t talk about you. Hannah – he always says all we have in this life is our word. That’s what he says. 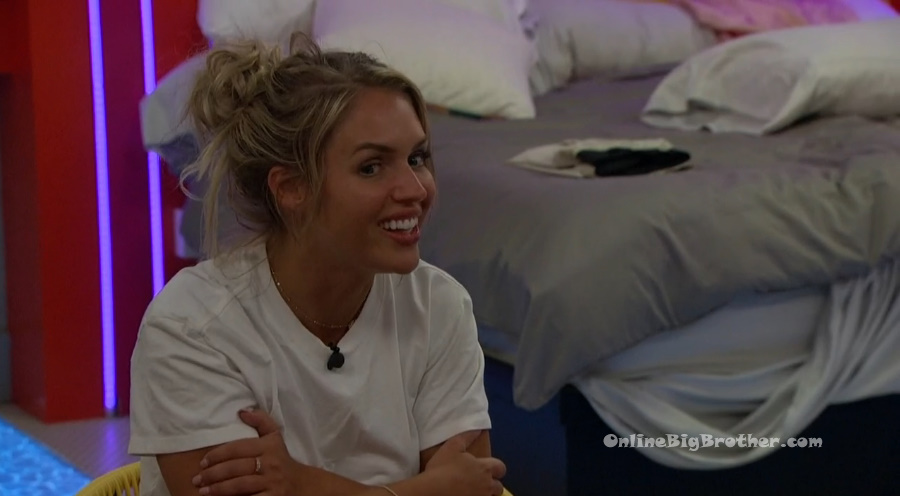 Just realized I didn’t add my visual chart that i made while trying to figure out the house dynamic in my post earlier.
I think this has almost all of the major house pairing / team / alliance parts included at this point. I went back in to try to add the team dynamics tonight.
With the Mafia thing between the Aces and Queens, and it’s quick exposure… I’m leery.
At this point… does anyone but Brent want to win the next HOH? Everyone else seems to be in a throw to someone else mood.
That’s…. yeah. that’s just fuq’d up.
Okay. talk to everyone next week. Cheers.

Ribbet
Reply to  another name

San_Diego_Gal
Reply to  another name

I’m literally LMAO at how you turned Big D’s photo sideways and put ZZZZzzzz. And then he’s falling off the couch. Best chart ever!

Kailei
Reply to  another name

Thanks for this visual! Keeping it for future reference.
Hard to keep track of all the alliances since I don’t actually watch feeds.