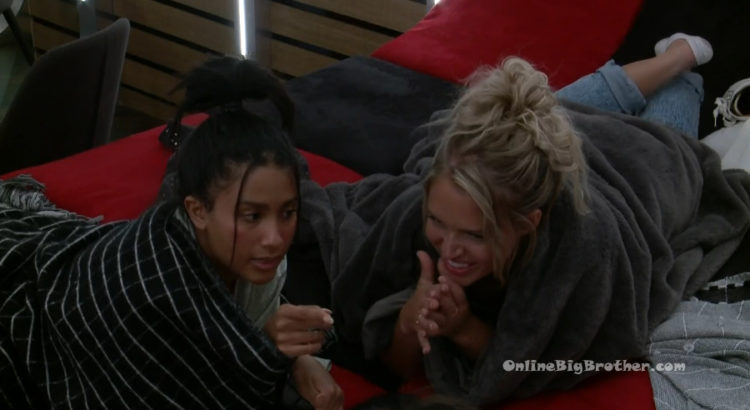 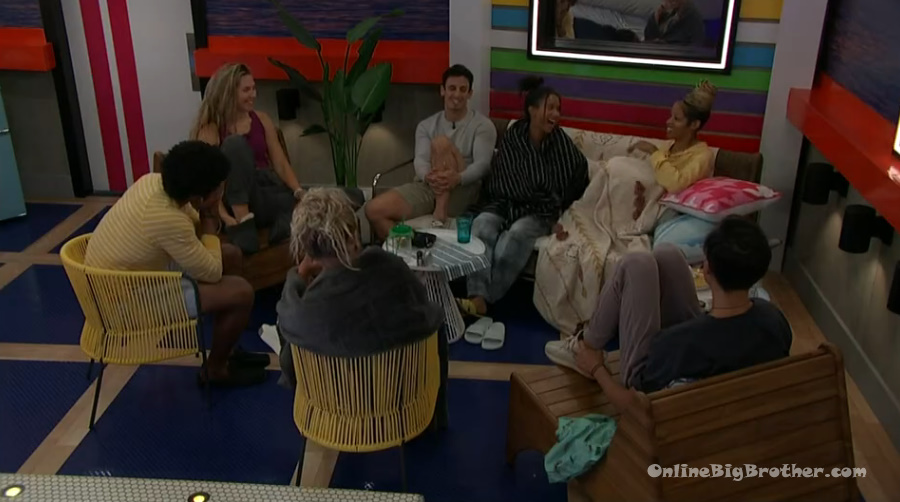 7pm HOH room. Claire, Tiffany, Derek X, Hannah, Whitney, Kyland and Brent
They’re trying to come up with an alliance name. Derek X – what are we the kings and the Aces. They agree on calling themselves the mafia. Brent – so we are the mafia. They plan to snuff out their “cigars” (guys) and cigarettes (girls) at the end of every meeting. Brent – and the first rule of mafia is we don’t talk about the mafia. They break and leave the room.

7:20pm – 750pm Chess room. Derek X, Whitney and Hannah.
Hannah – how do you guys feel about next week after Brent leaves potentially working with X, Christian and Alyssa? Whitney – I still don’t know how much I trust Christian. I think Alyssa would strongly align herself with the men and I don’t know how much I trust those men. We would only get so far and then we would be the first ones picked off. I feel really strongly about you two and Kyland. Hannah – and SB (Sarah Beth). Whitney – and SB. I think our teams are honest team players. Hannah – here is what I am thinking because on a personal level I adore Christian, Alyssa and X. If I am on the block next to Alyssa or anyone else is on the block next to Alyssa .. there is no way Alyssa is going home. The guys would be pissed is she left. Whitney – yes, since they’re all in love with her. Hannah – and its only day 15 .. imagine how much stronger those relationships are grow.. so that does make me very very nervous because she is not just protected from all sides. All of the guys have her back. There is no way I am staying over her. There is no way you’re (Whitney) staying over her. And there is no way you (Derek) are staying over her. On a personal level she is not a threat to my game.. Derek – in the long term its smarter to align with them than the kings because once it becomes a single game we are all equal. Hannah – I don’t want to align with them. I am wondering if it makes sense to take them out.. all three of them (Christian, Alyssa and X) out before jury. Derek – if Brent wins HOH I am going to try and convince him to turn on Christian. Britini is not a threat. Hannah – are we all on the same page with not aligning with Alyssa, Christian and X? Whitney agrees. Hannah – Alyssa is the bridge that connects everyone together. She is too protected! Hannah – I am going to have a conversation with Claire and Tiffany. You (Derek) have a conversation with X. 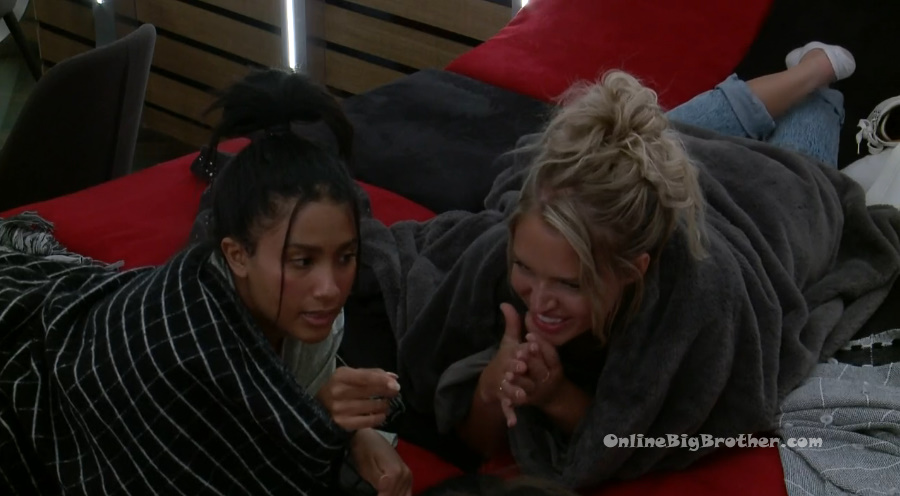 7:20pm – 8pm HOH room. Kyland, Claire, Christian, Sarah, Xavier, Tiffany and Alyssa.
Tiffany – last week (week 1) I noticed that you guys were off with yourself and we were off by ourselves while other teams were joining together. So I thought that maybe we should try to work with y’all the Kings. I still think that it would be an advantage for all of us to work together. Alyssa – I think its also smart that with Frenchie’s episode I don’t think those teams are working together. Xavier – especially not without cracks. Alyssa – yeah we’re a lot tighter. Kyland – I feel like this would be an opportunity for us to be more transparent with each other but I don’t want to do that by myself and I don’t want to make that decision for anyone. Tiffany – we have to stick together. Kyland – and if we have conversation with others we can come together and share to know okay this is the real story. Alyssa – if one of us wins .. we talk to the other groups first and then take with each other to talk after. Kyland – we came together and they said lets name it and make it official. IF the other team .. the Jokers .. we’re going to meet with them next ..if they do the same.. Tiffany – it was so unexpected. I thought the meeting was adjourned. They were like so do we work on a name? Everybody was like a name for what?! It took me 3 days to name my son .. I don’t have a name. Kyland – so if the jokers come and want to goin we will tell you. Tiffany – so do we do this now or do we wait till he (Derek X) is here. They agree to wait for Derek. Tiffany then offers up the name “The Royal Family”. The others love it. 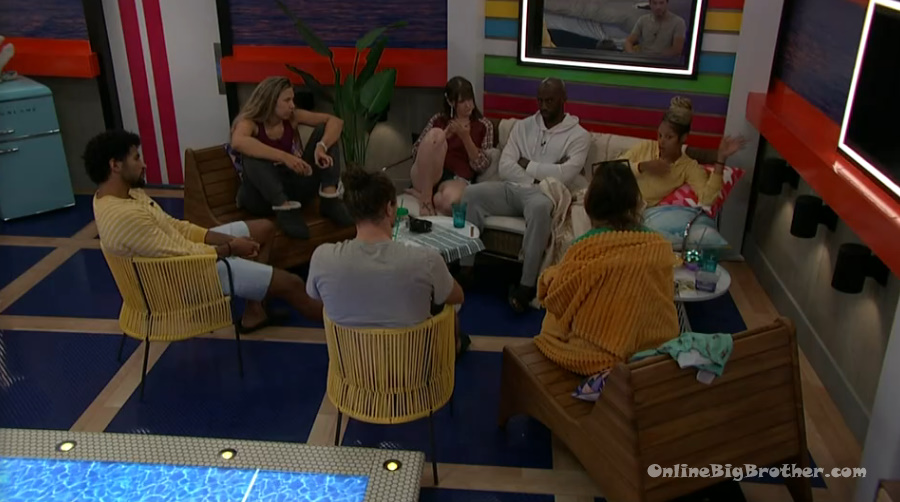 8:30pm Havenot room. Xavier and Alyssa
Xavier – Brent and Whitney, I know that is who everyone else is going for. Alyssa – that’s what we have to do regardless. Xavier – but I don’t have a reason. I need a reason. So right now I don’t care if I win HOH. Alyssa – I have a reason, Brent has been trying to get me to trust him more than Christian all .. this whole time. Christian is the reason why I was on the block because he walked into the room with me and you, Brent and Derek. Christian walked into the room and was like Alyssa is so my type. And that is what made everyone think that he was going to flirt with me. And that it was Christian’s fault that I was on the block, it wasn’t a rumor that Derek X made. And like I need to trust Brent because look at where Christian got me. Xavier – oh he’s been campaigning that you should trust Brent more. Alyssa – yeah. He was like look at here Christian got you – on the block and look at where I got you – safe because I was in Frenchie’s ear. Xavier – is there some weird love triangle between those three? Alyssa – no but I’m keeping Brent in my back pocket. Xavier – yeah, absolutely. This is a game girl. We’re playing to win. Alyssa – Brent was like I know you trust Christian but sooner or later we will need to get him out. And I was like are you kidding me?! He’s my teammate. Alyssa – we’re in the best position. Xavier – everyone wants to work with us and no one wants to target us. Alyssa – The Aces want to work with us because of the numbers. The Queens want to work with us because we’re the most loyal team. The Jokers are going to go after the Aces. I think personally you should hang out with Britini more. Christian and I have been playing chess with her and she commented on how she really appreciates us bonding with her this week while she’s been down. Xavier – that’s why I’ve started playing pool with her. Alyssa comments on how Christian needs to talk to people more without me. 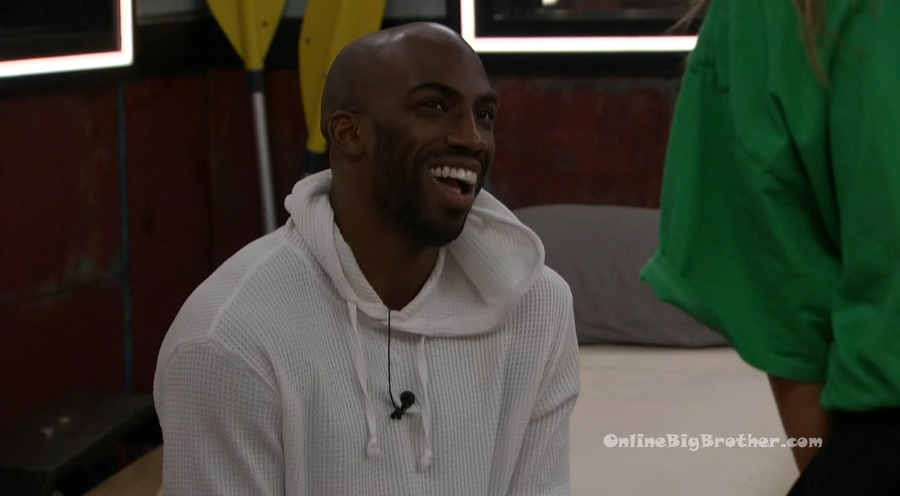 8:40pm Living room. Azah and Derek X
Derek X – I have heard your teams name come up. Not on an individual person but I have heard your teams name. Azah – to put us up on the block. Derek – yeah. That’s why I really need you to win HOH… to shake it up a little bit. Its not like its for sure its like if we did win .. and that is one of the possibilities.. so I like really want you to compete hard. You think your team is on the same page? Azah – yeah. Derek – should I be able to throw it to anyone on your team? Azah – yeah. Derek – really? Even Big D or Britini? Azah – I think they’re fine with you. 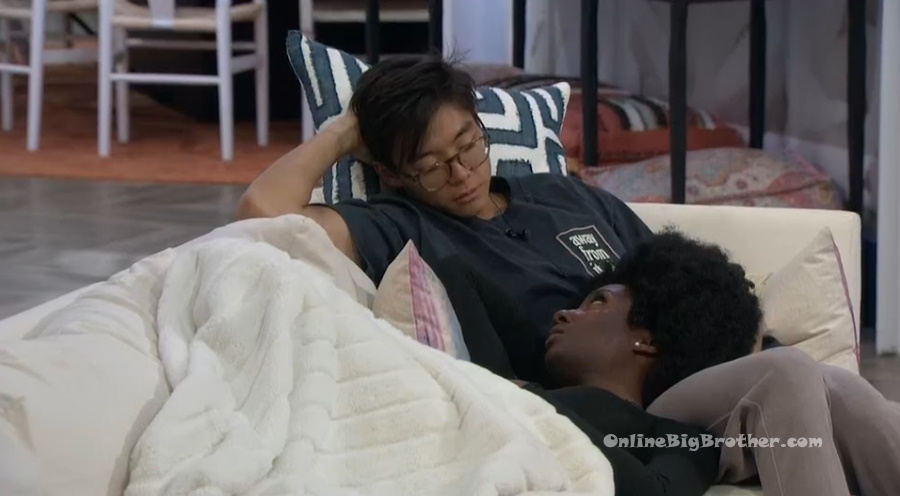 Alyssa about Christian "They [production] want us to do a little kissy kiss" #BB23 @bigbspoilers pic.twitter.com/mlW1QRNYBf

9:10pm Storage room. Xavier and Whitney.
Whitney holding up a melon. We can’t cut these. Do you want to throw them away? They give us sh*t we can’t cut.

(No knives. So Xavier and Whitney throw out a crazy amount of melons and fruit most of which was perfectly good. If you don’t have knives, figure out another way to open them! What a waste!)

Whitney – these grapefruits are too soft. (So they throw them out.) I can’t tell if these are good or bad. Xavier – so you might be throwing good ones in here?! Whitney then throws out most of the bananas.

Storage room counter with all the fruit before: 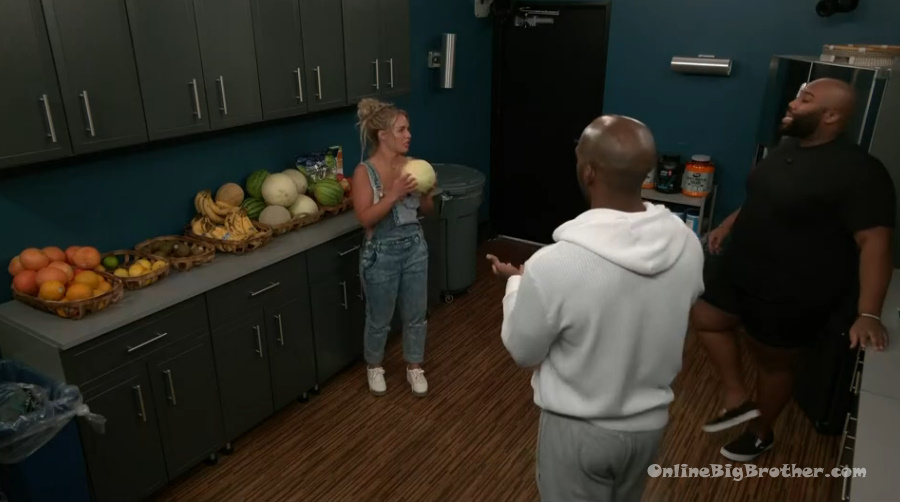 After: (“Cleaning” does not mean wasting and throwing out perfectly good food and fruit.) Whitney – I’m so proud of us.

I could never be on Big Brother. The notion of having to have a name for any alliance would just irk me so much.

WOW
The Mafia should be renamed The Sad Sacks with Brent as The Sarge, geeez 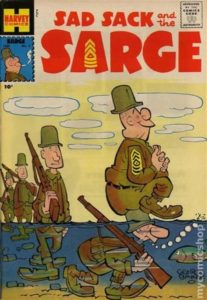