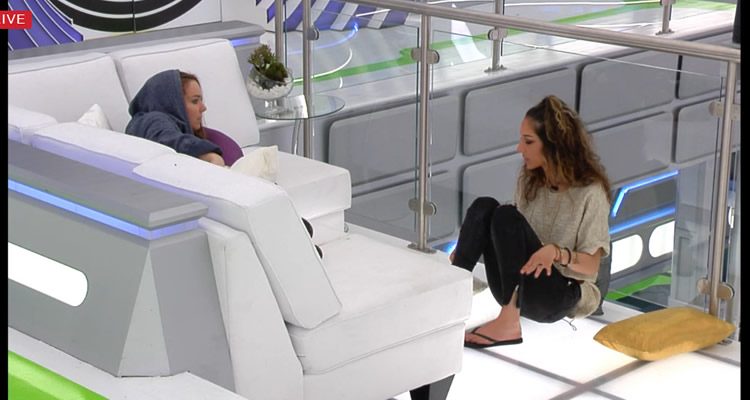 Light on text today but most of the important videos will be posted :)

10:10am Neda and Emily
Neda – the scariest people right now are Gary and Dre

10:46am Ika and Karen in the bathroom

Dre and Cassandra Storage room. Cass – I think Jackie is feeling bad / regretful. Dre – she should. Cass – she was like how are you feeling. Dre – who talked to her? Cass – I didn’t. I think she is just using her brain. If we can’t get him (Will) to use the veto do you think we could get his vote? Dre – don’t you think it would be easier to get him to use the veto on you? Cass – no, if we can’t get him to use it on me then, thats the last option. Gary said he is going to take care of Karen. Dre – you trust Gary 100%? Cass – yes. If we get past this week can I just be like here’s the line? I’ll do it. I’ll be the obnoxious one.

Bruno is trying to get Dillon to target Gary. Bruno – Dre opening her mouth took the heat off of everybody. It even has Jackie pissed at her and they were tight as f**k. So next week maybe start with the French connection and if one wins veto then throw up Gary. Dillon – yeah but we have to backdoor him. Although, I would like to see Gary squirm a little bit, you know what I mean. Bruno – oh he would man. You would see a fight in him. Dillon – oh I know, that’s why you don’t want him eligible for the POV. Bruno – trust me that guy can play. He’s a beast. He seems like he’s not but he is playing hard. If you put him on the block and he plays in the veto, he is a beast. Dillon – we just have to win HOH. I don’t see William using it but even if he does throw Gary up. And if Cass stays one more week.. who care, she can go next week. Bruno – Cass or Gary this week is win, win. Dillon – Gary can rally troops better. Bruno – he has definitely stepped it up. So you’re good with Karen. Dillon – yeah.

Cassandra and Karen
CAssadnra is saying if she wins HOH she’ll put up Bruno and Kevin. Asks who should be the backdoor option. Karen suggests Dillon. CAssandra syas they need to try and make sure JAckie doesn’t flip the house. Karen says the only way that will happen is through William. Cassandra and Karen agree Jackie must go.

CAssandra tells Ika the other side of the house is Kevin, Bruno, Emily, Dillon, NEda, Jackie against Demetres, CAssandra, Ika, Dre, William, KAren and Gary.
CAssandra – we have 7, Karen is with us 100%..
CAssandra says NEda is really shady. She’s going around the house saying that Cassandra mentioned everyone’s name but Cassandra only mentioned Dillon and Emily.
CAssandra – I’m going to push William tonight..

CAssandra says she’s worried about Demetres.. Ika says Demetres has been avoiding her.

Kevin talking to himself in the HOH room – Cass has to go home. If Cassandra goes home everyone else’s mind opens up a little bit. I can then have conversations with Dre, I can have conversations with Karen. Because I trust all of the vets if Cass goes home. Cass / Dallas going home back to back weeks without me winning a competition. Its almost too good to be true. My stat line in the game so far… zero nominations, zero competition wins… its perfect. This has been such a good start. I just need to sleep. I’m telling you big brother if I sleep .. I can win this whole thing. If I lose my sleep I won’t be able to think. I just have to stay humble, always slightly paranoid. Hopefully Ika and Demetres start a showmace because people view a showmance as more threatening than Bruno and myself. If people ever do attack Bruno and Kevin, I need to make sure Bruno is the bigger threat because people will attack us… maybe not in week 3, maybe not in week 4 but if we get down to 10, 9, 8.. then people are going to look at us and attack us. Neda, I trust completely. Cindy I trust completely, Bruno, Gary, I trust all the returning players except for Cassandra. And that is why she needs to go. If she goes it frees up the mind of Dre and Jackie.. people that I could have those conversations. I just need to continue to build my relationship with Karen. Its tough to talk but not give up information. Its tough to be fun and likable when you’re exhausted. Kevin starts studying the days/comps. Emily joins him.

7:39pm William and CAssandra
CAssandra says next week Neda’s side will go after Dre because they think they have Ika.
CAssandra says Bruno already gave her a goodbye speech.
CAssandra says NEda has been so
William says he doesn’t like Neda she’s feel like like she’s “I’m so powerful.. shutup” (3:20 time on youtube video to get his motions)
Cassandra – as soon as she’s done with that immunity she’s out..
Cassandra says if he doesn’t use the veto she’s gone unless he votes for her.
CAss – I’m telling you JAckie’s with Kevin and Bruno she’s not with us

Cassandra – She hates me, Neda.. they’ll be onto Dre.
Cassandra – If I’m up on the block Thursday we need your vote and that puts you in a shitty situation
William does say he doesn’t think he’ll use the veto on her because he’s sure Dre will go up. His vote is negotiable.
William says he’ll think about what she said.

Bruno and Gary. GAry is upset that Bruno wiped his makeup off. Gary says he created art on Bruno’s face and Bruno wiped it away. Gary is upset about it. In the end they hug it out.

Ika & Dre in the HOH room. Ika – this is Karen. Dre – I love Karen. Ika – Karen came in here and said the votes are going to stay the same because Cassandra is telling me the votes 100% with you Ika and me as well and Dre. And I was like yeah we’re all telling her lies, its fine Karen. Ika says Karen said – another thing Gary told me to tell you Neda that Dre has been running around campaigning for Cassandra to stay and Gary told me to tell you this. Ika and Dre laugh. Dre – I love Karen. Thank you Karen. Thank you, Thank you Karen. Ika – I said so Gary told you to do that? And she was like yeah. Dre – Karen, you’re gold! Ika – Karen feels like Gary has convinced her that you’re in with Cassandra. So Karen has been telling Neda that you’re in with Cassandra. Dre – that’s fine. I want to tell Cassandra.. Wednesday? Ika – yeah. Ika – Gary needs to go home. Dre – I love Karen. Ika – Gary already told Neda and then Karen came and told her again. And after she left she said Gary is a piece of shit. Dre – Neda has been going around too and she needs to correct what she did. Ika – that she’s been telling other people that you’ve been campaigning for Cassandra. Dre – yes. I don’t trust Neda. She could have come to me and she didn’t. I’m done with her trust. Adds that Gary’s number one is Cassandra. Neda says Karen told her that GAry is saying to tell Neda that Dre is campaigning to keep CAssandra.

I think she means game play. Dre is playing a pretty solid game. Those are Neda’s main targets after CAss leaves.

Anonymous
Reply to  What

Not racist, I’d say she’s right. Dre playing a very effective under the radar game right now and if there weren’t returnees she would be sitting pretty for a long time. And Gary’s social game is on point.

I don’t know what you’re watching but Gary’s game is so transparent and all of the houseguests are on to him. All he does is sit in the bathroom for hours putting on or taking off makeup. He tires quickly of any conversation that can’t be all about him. He’s thrown Cass and Dre under the bus to Neda, Ika, and Sindy to keep the target on them. He throws shade on everyone. He was supposedly on a fast today that made him hangry and irritable and the topic of conversation with everyone in the house. He made a fool of himself when he painted makeup all over Bruno’s face that made him look like some sort of hideous whore clown. I hand it to Bruno for staying relatively calm when he finally got the chance to see Gary’s handy work. He left the make up on for about a half hour or so while others in the house were having a good laugh at his new look. Once he washed it off, Gary had one of his hissy fits, saying that his feelings were hurt and Bruno had disrespected his “art”! It was beyond ridiculous. Now, he is on the house radar for eviction next week.

I’m confused about Kevin.. is he into girls, guys or both?

I would say both.

So this may be strange idea, but if William uses the veto on Jackie, would it be Cass and Gary on the block or would it be Dre and Cass? And if so would it fracture the vets more or would it bring the vet who stays in closer? I know it won’t happen but I wonder……

Cassandra staying would be Gooolden TV tho
It’s hard watching all these I can’t tell when people are actually being loyal or just being fake
Mostly Ika, I think she’s most loyal to Neda? But idk she’s set up pretty much everywhere but with Dillon/Emily

In my opinion, telling Cass before the veto ceremony that she didn’t have the votes was stupid. It got Ika back into the six alliance’s good graces, but it wasn’t a smart move unless she is trying to keep Cass away from her, and latched on to William. Does she want William to be chewed up and spit out until he uses the veto?
The chances of William currently using the veto are about 15%. sure he has a fanboy moment about Cass, but he himself has recognized that she has tried to get him to lie for her in the past, and knows using the veto draws a big line in the sand, a line that may cause Dre to be sacrificed. Cass asking Dre to convice William they’d have the votes to save Dre? She’s essentially asking Dre to volunteer to go on the block?
I’m trying not to be biased, because i’m not a Cass fan, I think her campaign would be better if she spent more time talking about what she brings to the table, and less time crying victim. Since Everyone Cass has been working with knows that she has asked each of them to lie at the risk of their own game to meet her needs, saying that Jackie is lying doesn’t hold water. Instead she should be putting her strengths forward in their minds.

Cass needs to get over herself and head back to winterpeg !!!and I refuse to wAtch or listen to Jackie in ANY conversations , the girl cannot complete a sentence without using the word “like” 100 times !

the day Neda is evicted will be a glorious day!