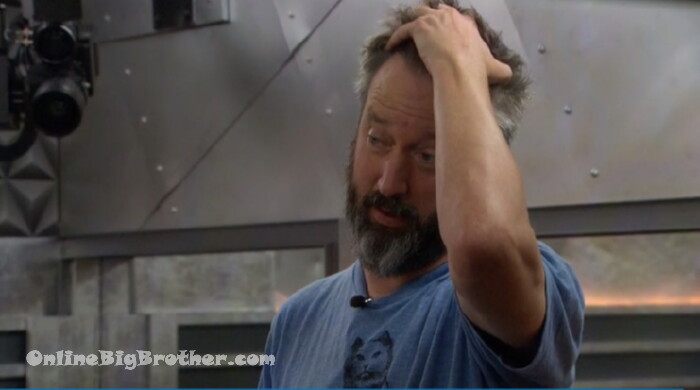 Ryan is the Head of household
Jon was auto nominated due to twist
Ryan nominated Tom and the mooch
The mooch quit the game. Kandi tossed on the block up in his place.
Kato won the Power of veto plan on using it on Tom
Sounds like Jon is the target
Joey has been asked by Ryan if he’s OK with being a Pawn. Joey’s reply “WHOA” (yeah)
@1:35pm feeds come back Kato used the Veto on Tom. Ryan nominated Joey “Whoa”
Mooch left because he had to go to Davos.. 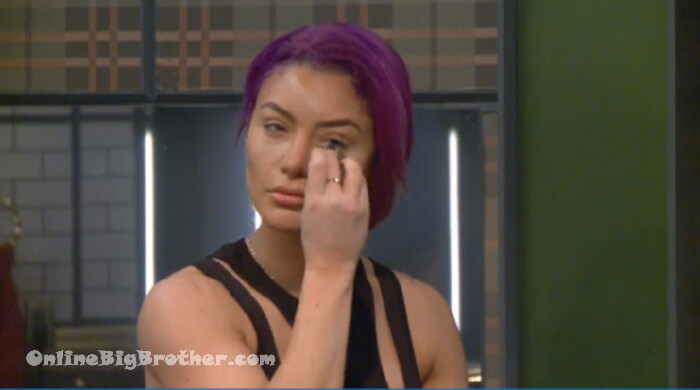 8:03am Lights on morning makeup routine.. 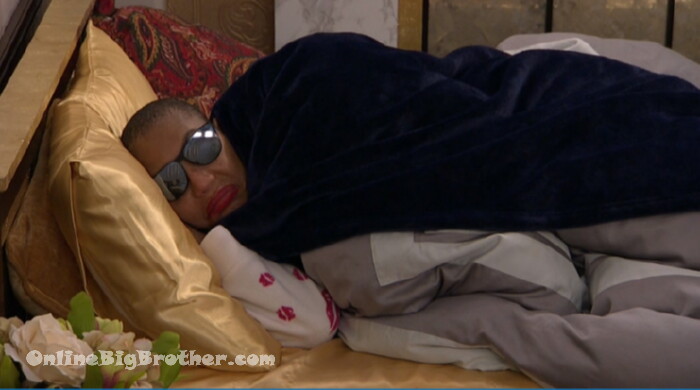 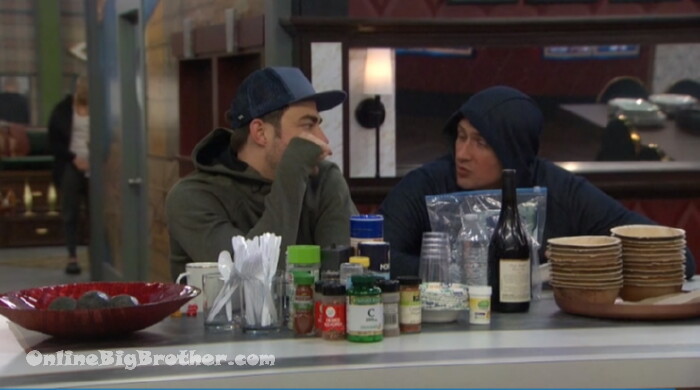 9:00am Jon and Ryan
Jon tells him he thinks the girls wan Joey nominated. He’s felt it for the last couple hours.
Jon says if Ryan nominates Joey it proves that they are not in an alliance.
Jon – the only other person we can put up is dina.. she will take votes away from Kandi because they are the same energy
Ryan – no one is going to vote for Dina
They agree to talk to the girls today and see what they have to say. and then explain this to Joey. 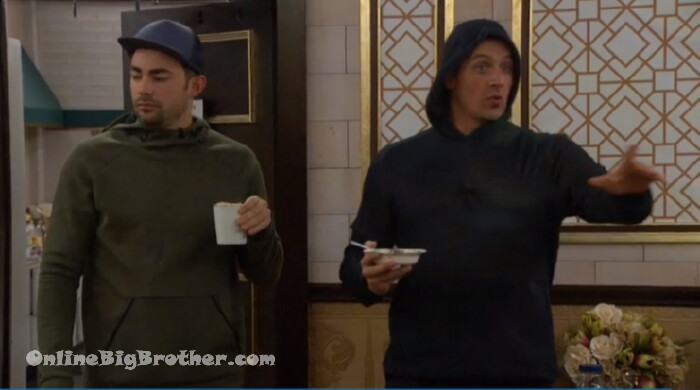 9:05am Ryan heads to the bedroom to talk to Tamar and eva.

jon/Ryan “we have to talk”
Ryan – if I have to put someone up we don’t know who..
Tamar – it better not be me ..
They suggest Joey
Jon – because it would take.. (the heat off)
Jon – if we put Dina up it will divide the vote between Kandi and Dina
Tamar – I don’t think so everyone loves Dina, she’s like so safe
JOn – we want someone that will get one vote because one vote will take it from me..
Eva – ohh yeah because Dina will vote for you
JOn – Dina will not vote for me..
Eva – yeah she’ll vote for someone else
Ricky comes in
jon – what do you guys think we should do.. think about it
Tamar – IO thin kit’s the same vote either person..
Jon – if we put Joey up there’s a possibility one of the boy Kato or tom could vote for him maybe..
Ryan – Kato is going for you
Jon – kato is to
Jon – I want the person that is up to split the votes the way we want like in an election when there’s a independent running and then the democrat loses because …. 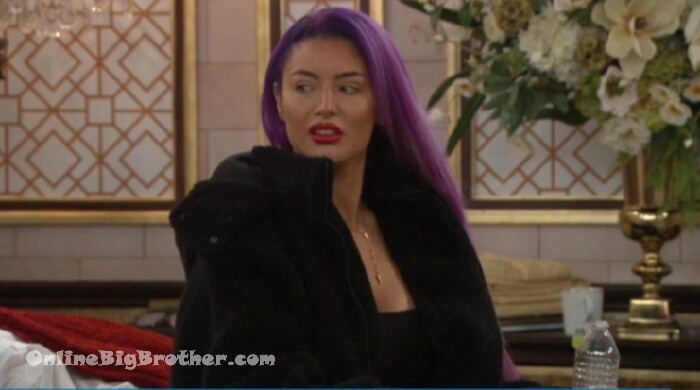 After Jon and Ryan leave Natalie asks Tamar why all of a sudden the guys want to work with them.
Eva says they are tripping
Tamar points out that the guys said “we’ve been talking about it.. we should talk to the girls about what we should do.. they’ve been talking about it”
Eva – Bye.
Tamar – it’s so fake.. he’s gotta go.. I want them both to be gone
Eva – the fakness..
Tamar – I just called Jon fake last night

9:40pm Tom and Kato
They’re trying to figure out when the Veto ceremony is..
Tom thinks in the next couple hours they are going to be called to start the veto ceremony
Tom – then it will begin the process of continuing social experiment those two lobbying for votes over the next 24 hours
Kato says he’s going to use the veto on Tom and will say in his speech “he laughs at my jokes.. he’s my roommate and we just had conversations at night by chance”
Kato – I just grew up with my brother in a bunk bed and I felt the same way with Tom..
Tom – everyone knows we’ve allied up.. you might want play it down a little bit 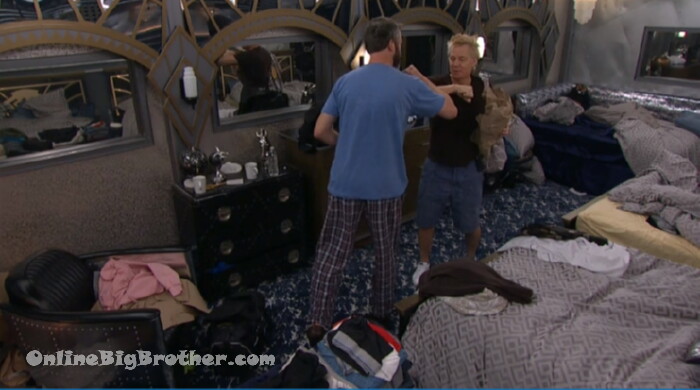 Tom – they could all be voting kandi out.. you never know.. I’ve had too many crossed conversations with too many people
Kato – my guts telling me it’s happening .. we’re pretty set. (Jon getting evicted)
Tom – I’ve connect with Natalie, LOLO..
Kato – yeah I can smell deceit
THey agree to head upstairs to workout with LOLO and Natalie.. “we’ll let them talk” 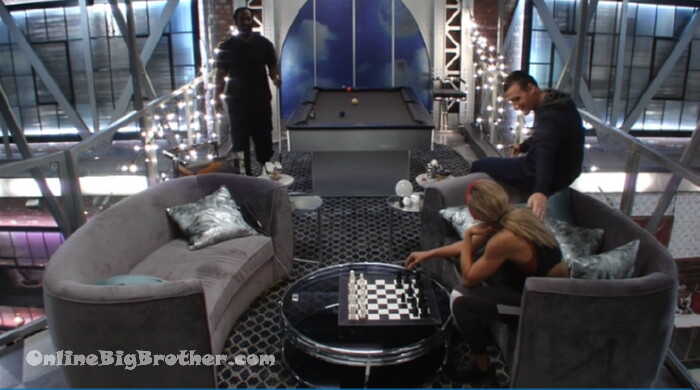 LOLO – just the nominations tonight right..
Ricky just the veto.. pretty predictable..
LOLO – it is and it isn’t

They agree the veto will be used but it’s unknown who will go up. Ryan doesn’t think they will have 3 nominees it will only be two.
LOLO – it’s usually two right
Ryan – who knows.. we had no idea Anthony was gonna..
LOLO – yeah that was a fun twist.. this is like has their ever been three ever on the block (no never.. what a crazy idea)
Ryan – no..
Ryan – if Kato uses it which he is .. that they leave it at that.,.
LOLO screams that she needs a massage therapist.. 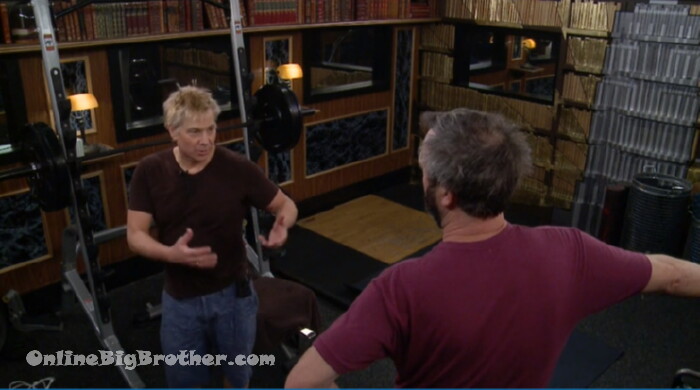 10:54am Kato and Tom
These two are all about the game.. planning final 4 final 2 ..
They finally agree they should slow down and not “pollute” their minds. There’s a lot that could happen. Tom is skeptical about LOLO and Natalie. he thinks they are playing it cool but maybe too cool.
Tom suggests they create some “pseudo alliances” with people ion their side but not their side..
Kato suggests Ricky
Tonm suggests Ryan
Kato – Once jon leaves.. yup
Tom brings up the object of the game is to take out the strongest and least loyal people first.

celeb bb vs bachelor vs agt the champions

Hmmmm …….. Ricky won the VETO on the broadcast?

Is It true that Scaramucci is gone already?

Damn that was quick!

The BB2 drinking game….Every time Tom Green says he has one nut, you drink. FYI…he has said it 4 times in 2 episodes.

I have a feeling we’ll all be DRUNK.

You can't sit with us

Jonathan needs to stay longer in this game

Hmmmm …….. Ricky won the VETO on the broadcast?

Is It me or does Joey not look healthy. When they went out to do the POV companies he looked way too thin

I thought so too!

Soooo. I’m thoroughly confused now !!! Ricky won veto and didn’t use it. Am I missing something ?

They had two vetos

Dang. Thanks Simon. I went back and read again because I really thought I had lost my mind. Lol.

AHHH he same thing happened to me.. I didn’t know anything about Ricky winning the first veto by watching the feeds. Started seeing things on twitter and thought for sure I had lost it. ..

Hopefully things get cleared up in the next episode if not they’ve really just going to irritate folks. They don’t have to go into a whole giant explanation but some clarity will go a long way. Perhaps there was a problem with the veto comp and so they felt it best to do it again although Kato wasn’t a player in the first veto.

Every spoiler in this thread was wrong, except maybe Mooch leaving as that wasn’t shown yet.

Nope… you gotta watch the feeds.

Kato did win the veto and did use it on Tom. Not sure what the first veto that Rickey won was used for.. LOL

Just saw your replies to the others, thanks.
I guess after the mooch left they decided to hold another veto comp? I don’t think that’s ever been done.
I remember them re-running a comp (in BBOTT maybe?) because of a problem with lasers or mirrors for one competitor.

LOL! Mooch’s BB stay was even shorter than his WH gig. WTF? What a loser… probably gave up because he didn’t really want to face the embarrassment of being the first one out. I hope CBS took back his pay.

It’s always nice to watch the show and talk about it with you guys on here, but I’m not feeling this season yet. Last year I was hooked from day 1: a bunch of “celebrities” that really knew the game and WANTED to play it. This time it’s just a bunch of hasbeens – just like last season – totally okay with the idea of just getting a check to appear on the show. Boring!

Simon/Dawg…. what’s your view on the whole Mooch situation? Some people believe he was a production plant for views (because Omorasa was so popular) even tho they knew he was going to attend his conference in Davos a week into the game. I honestly didn’t think he would quit this early into the game, so idk what to believe…

Maybe some business thing came up and his plans had to change.. maybe he just wanted to be part of the pre show promotional press to keep his name in the news.

Or maybe he’s just the mooch..

It was unplanned. They never mentioned any ‘twist’ like this. Plus it wouldn’t have worked if he wasn’t on the block. They had to do a second Veto comp because he left the show and that changed the number of nominees to 2, and they probably wanted to keep it at 3. He might have been debating about attending that conference, but most likely he has people who could do that for him. And people said he left his stuff in the house.

Mooch definitely quit, even though BB tried to cover it up with the ‘twist’ of having a second Veto comp. What good would that twist have been if he wasn’t even on the block? They wanted to keep their 3 nominees. And that veto comp was so basic, just looking at a bunch of pictures and then running off stage to lock in your count? He was looking pretty haggard the last few times they showed him on screen. He probably couldn’t take being in the house, and on the block, anymore.