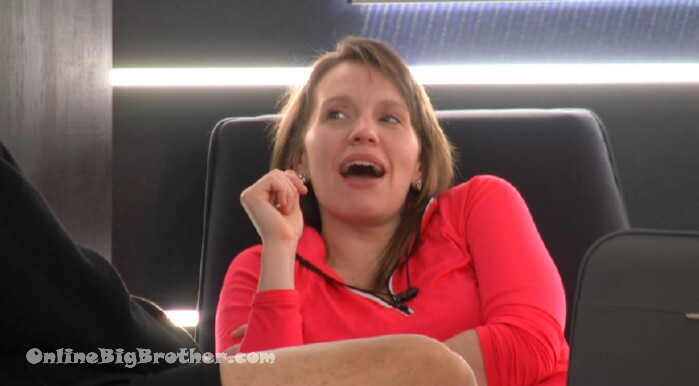 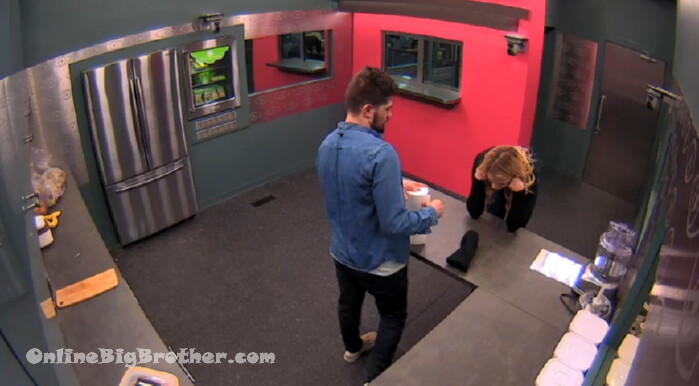 Chelsea playing up that Kyra has been playing her. 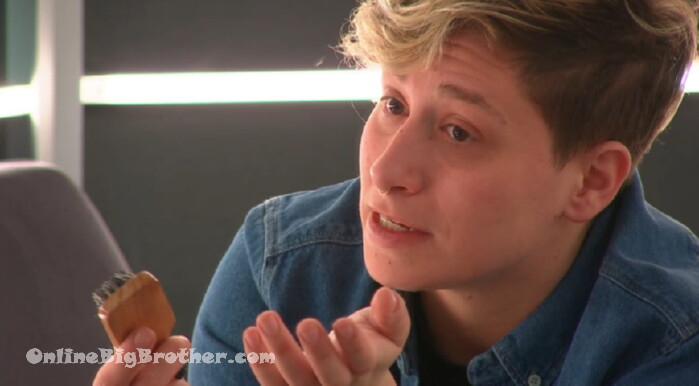 3:12pm Kyra and CHelsea
Chelsea brings up the possibility of Kyra playing her.
Kyra – I want you to know I was willing to do anything to save you
Chelsea – I know ..
Kyra – why would I do that.. it doesn’t make sense. (turn on Chelsea) 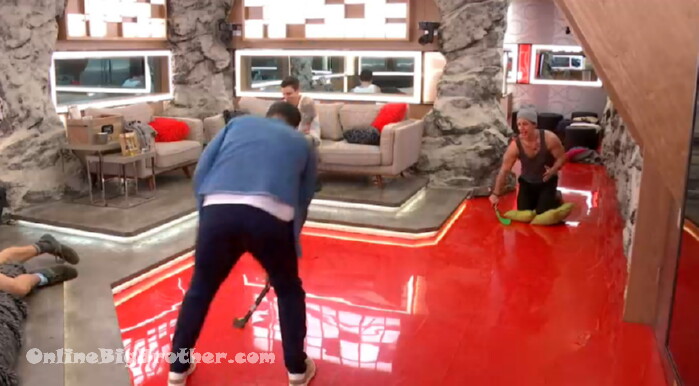 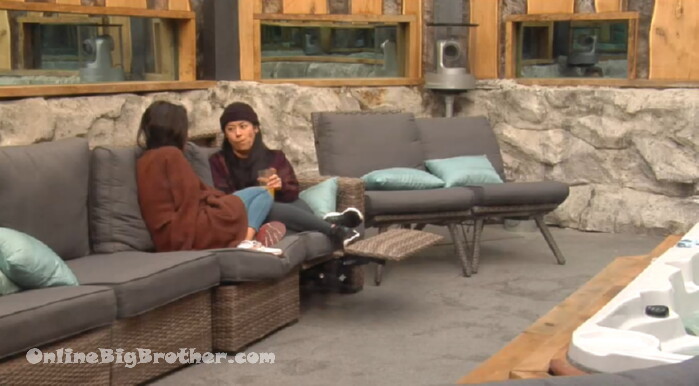 4:08pm KIKI and Stef
Stef – Apparently Kyra wanted Sam to win the veto and use it on Chelsea .. so the plan we were talking about what they were trying to do that is what was going to happen I’m pretty sure (Sam, Kyra, CHelsea were going to use the veto ion Chelsea)
Kiki – wow.. did they throw it
Stef – no I don’t think they ended up throwing it..
They agree that this was Stupid Of Kyra “throw you game out there”
Stef – Chelsea was like hold on I’m not going to do that and roll over i’m going to go out with a bang.. that’s what Chelsea said
Stef – Kyra was like no no you should not do that
Stef says Kyra wanted Chelsea to not say anything all week this made Chelsea think she was being played the whole time
Stef – that’s what the drama was about it’s so stupid..
Stef – it’s obvious.. they’re obvious.. .. NO Kyra was not manipulating Chelsea Kyra clearly likes Chelsea .. Kyra is not playing her
Stef – Chelsea is trying to come up with some stupid plan to put the target on Kyra.. Separate herself from Kyra
Stef – you’re not stupid enough to believe that Kyra has been manipulating you this whole time
Stef talked to Sam about this and Sam says it’s probably because Chelsea wants to separate herself so she feels about about campaigning.
They agree Sam is probably happy that Chelsea is going. Chelsea was the wedge.
Stef – Clearly they are very emotional and they use those emotions to their advantage
Stef – you know how Sam was talking a bit of trash about both of them ..
KIKI – since Kyra’s been here she’s had emotions for Sam, Me and Chelsea that’s f**ed.. like WHAT..
Stef mentions that Kyra thinks that Chelsea like her too.
KIKI says that’s not true and if it is it’s true what MOMMAK said about Chelsea and Kyra “they’re crazy”

They bring up that CHelsea has a boyfriend and she’s straight. They both see that Kyra has trouble telling the difference between romance and friendly cuddling.
Stef mentions Kyra telling her that what she felt with Chelsea “was real.. we cuddled up there every night”
Stef -that doesn’t mean sh1t I cuddle with KIKI I cuddle with mark..
KIKI – we gotta get a double take them both out
Stef says Sam has promised her safety next week if she wins.
Stef says after Chelsea leaves they won’t to be on Sam’s good side because she’s good at winning Competitions 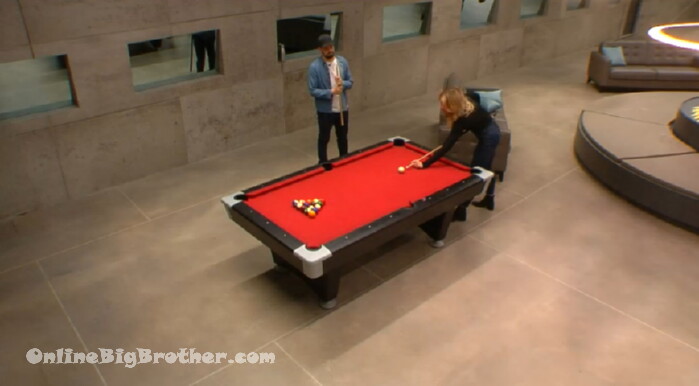 5:16pm Chelsea and Mark
Chelsea campaigning saying she’s going after Dane if she’s left in the house.
Chelsea – the only thing I’m capably of is to be perfectly honest..
Chelsea says she had a conversation the KIKI what was completely misconstrue. KIKi thought that Chelsea was trying to pitch a girls alliance.
Mark apologies for being in the middle of the “whole KIKI thing”
Chelsea says KIKI is one person she doesn’t trust in this house.
Chelsea – Dane is playing a really smart game… He’s the type of player that is going to win. wether or not people see that yet or if people play it safe and go with power.. 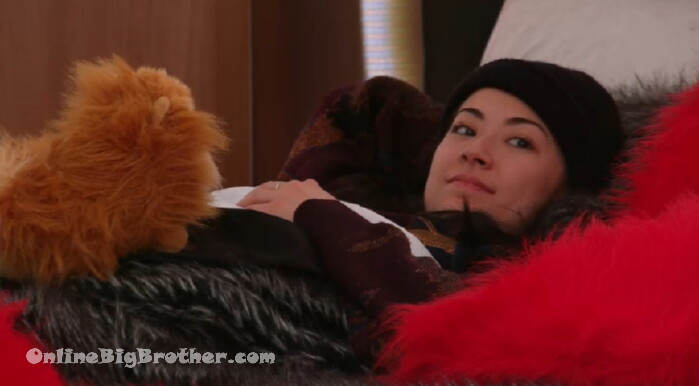 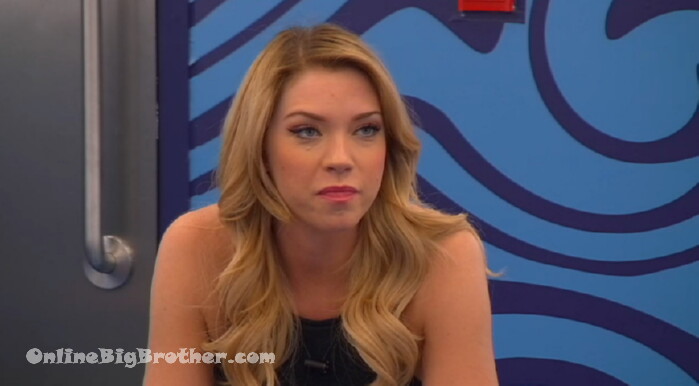 6:00pm Chelsea and Sam
Chelsea says her plan is to make it known that Dane is her target she’s going after him and She’s not working with KIKI and Esti those are her targets too.
Sam says she’ll help Chelsea.
Chelsea is going to say during the Veto Ceremony that the reason why Dane nominated her was to use Kyra as a soldier. his reason that she was forming a girls alliance is just an excuse. 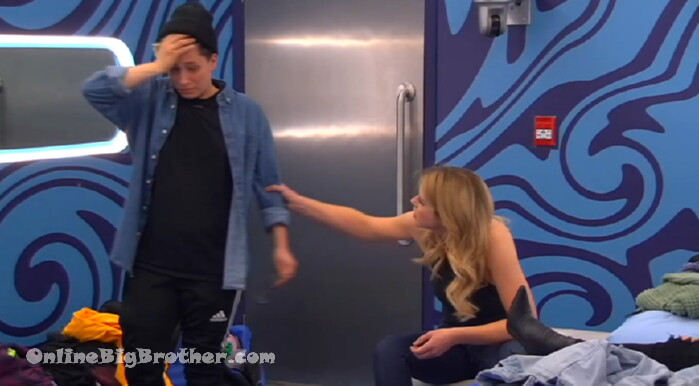 Kyra comes in crying …. “I can’t do this.. I can’t”
Kyra – I’m not playing you this is too much..
Kyra – I’m not made for this sh1t..
Kyra crying about everybody hates her “Everybody is avoiding me”
Chelsea – that’s what happens when you are on the block.. look at the plague maki put on the house..
Kyra- I don’t want to fight against you I can’t

Bunch of people come into the room to give Kyra a pep talk. 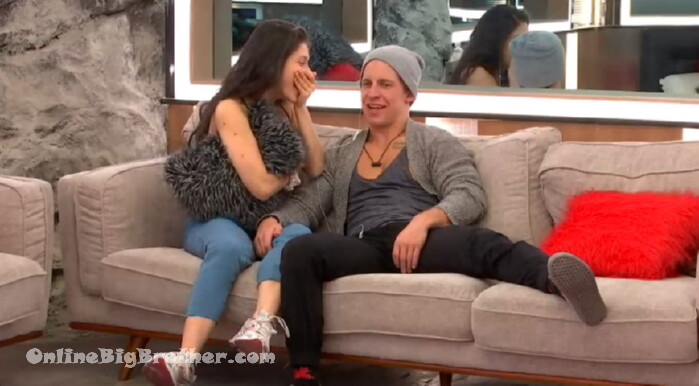 6:15pm KIKI, Stef and Dane
KIKI talking about walking in on Mark while he was J******g **f in the shower.
KIKI – he was standing their facing the wall for a good minute.. 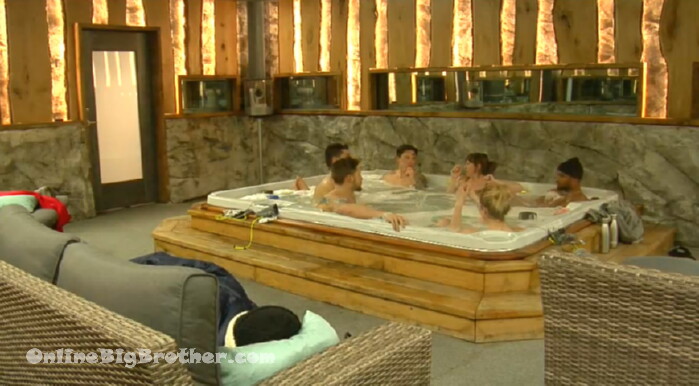 Great Catch! I don’t trust BBCAN one bit so I’m thinking you are on to something. A pretty important bit og information to remove from the title.

thanks. the sites articles spoilers and perception gages (they are calling it their weekly barometer) are very telling. the way i see it, last season they were following the archetype of season 2 and crafting a neda 2.0 edit (imo they turned the season sabrina into the new neda through careful editing), while this season they are following the season 3 model with the ‘what if sindy never returned to tank the chopshop/diaper kids’ angle.