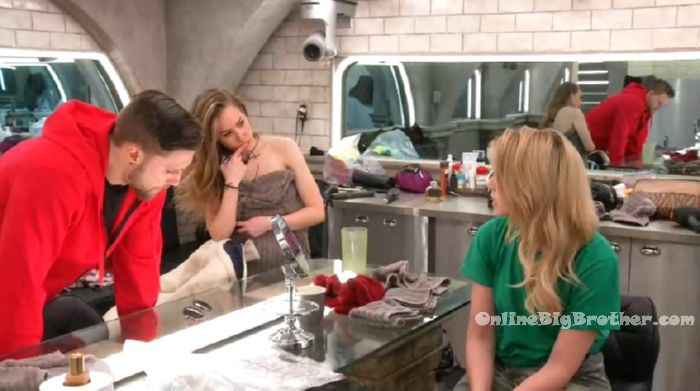 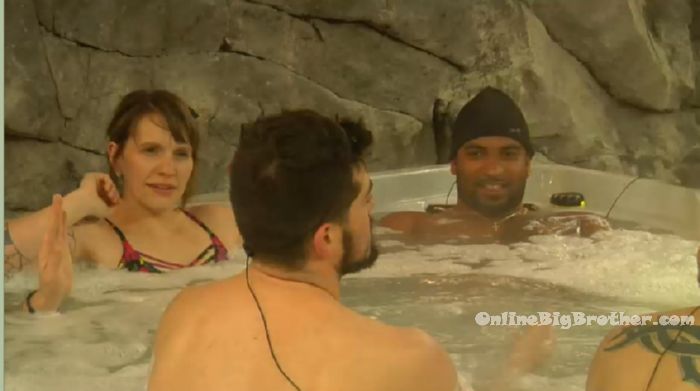 9:20pm Hot tub talk about kissing on the first date and Marks troubles on trying to get dates / girls. Anthony says he doesn’t kiss on the first date and wouldn’t have a one night stand. Mark – have you ever met up with a total stranger from DM? Anthony – no. Chelsea – I have. Mark – what was his DM? Chelsea – I think.. You look familiar, have we met. Anthony – EEWWWWw!

10:32pm Bathroom. Adam, Sam and Chelsea.
Chelsea – no one is going to believe that because I’ve been working with you this whole time … and then its just going to make me look disloyal. So that’s a stupid option, I can’t do that. Adam – true. Chelsea – No one is going to want to do it because he’s a great player and a great guy. Sam – I’ll do it. Chelsea – No one is going to want to do it .. so that will be my pitch. That will be my campaign. I don’t think its going to work .. but I would rather try than roll over and die. Sam – definitely. Chelsea – its either that or throw Kyra under the bus or you guys and that makes me look like someone that can never be loyal in this game. And if people are like are Sam and Adam in on this too … and I’d be like no I’m playing my own game. If someone doesn’t take him out .. he will win this game. Sam – You’re right. Chelsea – He is really good with people and he is playing people like they’re puppets. Sam – I’m convinced. 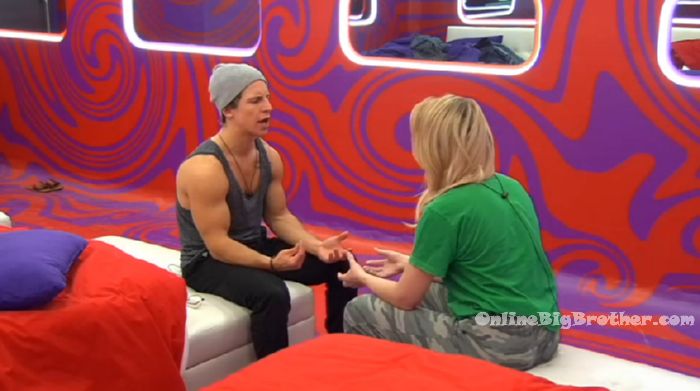 Dane and Chelsea in the bedroom. Dane – I could go against Adam and Sam, however right now they’re my shield. I need Adam in this game and Sam because she is attached to Adam. And they’re my shield. If I take out Adam, I am public enemy number 1. And the only reason I put up Kyra next to you, and You next to Kyra is because if either of you were to win the veto .. then I am back to square 1. In a game sense if I down burn a bridge.. I totally understand that and if you do come after me I respect that. Or we can build another bridge and try to work around it. Chelsea – everyone has to have targets. You put me up this week and I have to go against that. I am not going to just not fight for it. Its not because I don’t think you’re a great guy. Its because I think that if someone doesn’t call it out, then you’re going to go straight to the end and you’re going to win. Dane – I respect that.

12:59am Eddie studying the flies looking for clues.. 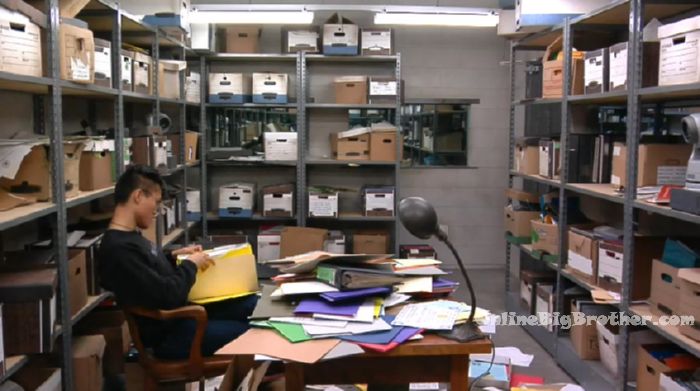 1:30am Dane and Eddie.
Dane – you were never on my radar. Eddie – I just want you to know that going forward in the game, I have your back. Dane – she (Chelsea) said your name first that’s why I agreed with it. If it had been anyone else’s name I would have agreed with it too because she said it.

2:30am All the house guests are sleeping..

Help support all the live feed updates we provide. Show your support by making a donation. Any amount is greatly appreciated!
Subscribe

i think the demon eye thing and the demon voice are the only things i’ve actually liked about este. maybe she should just play the rest of the season in that character.

correct me if i’m wrong:
adam is under the misconception that the house is worried about sam and adam getting on jury together.
no.
adam’s allies are worried he will back stab an alliance member to go to the end with sam.
the rest of the house are worried that sam and adam will send them out the door.
if adam hadn’t told the rest of the pb’s so much about what sam and chelsea had been saying, chelsea wouldn’t be on the block.
if adam hadn’t pushed so hard for the final 6 to be set in stone as the pb’s and chelsea and sam… the pb’s wouldn’t be so worried about adam’s loyalty.
the target on sam, and the target on chelsea are adam’s fault.

another name
Reply to  LindaLou

Hoping next week someone other than the PB’s win HoH

As for the double, it won’t change a lot of things,

Cory wins HOH : A bit of a wild-card, but would probably target Sam under Anthony influence

Damien wins HOH : I think that Damien want’s to target Dane and Adam, but would probably be influence by the twins to target Adam and Sam, Sam will go home

Kyra : This one is a little bit more tricky, but would probably work with Adam and Sam on this one, probably target Kiki and Eddy

Anthony : Sam….but will probably throw it

Mark : Major Wild card for me….

So the targets are Sam or Kiki…..

But next week could be a lot of fun!

another name
Reply to  Pâques

agree with much of what you said except: damien really wishes he was in the brodown. he is getting too close to dane and anthony, and cory is encouraging this. damien will go after sam and adam, yes, but it will be anthony encouraging him to take out sam. the twins don’t actually hold much sway over damien.
mark is setting things up to vote out kiki (he engineered the bathtub argument last night for cause). but mark isn’t planning to win an hoh until the middle of the game, at which point he would take out one of his allies in the pb, or damien.

Estefania in The Grudge BB edition