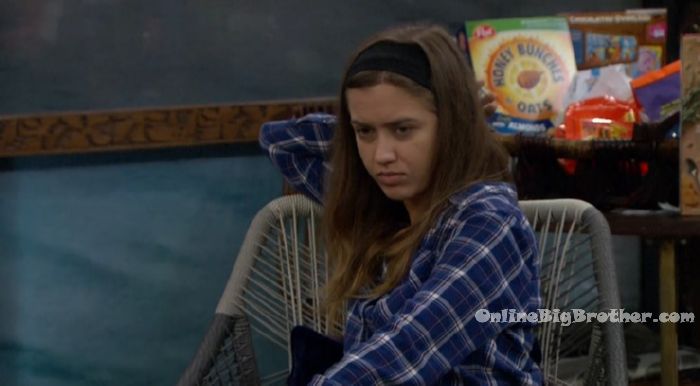 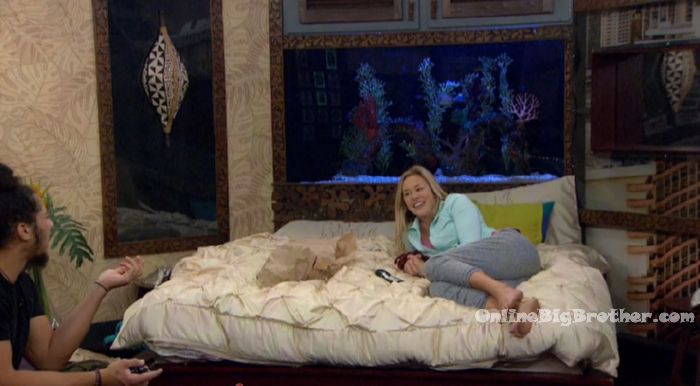 8:25pm – 10pm HOH room – Justin, Shelby and Morgan. Justin – this has been a wild and crazy week. The last thing I expected was for Alex to go home. If you would have asked me … I would have told you. Morgan – yeah and I figured. After the blow up fight .. it was everyone just exploding. Justin – I was just like C’est la vie, C’est la vie! I don’t like none of that sh*t. I don’t like all that confrontational sh*t. I’m going to go kick it down stairs. One love! Justin leaves. Shelby – thank goodness I am HOH this week because it would suck if I wasn’t. Morgan – that it would. Shelby – our only saving grace would be convincing someone to take out the other care package. Morgan – what will be interesting is when all the care packages are gone. Shelby – there will be another twist at that point. I don’t think they’re going to let us play big brother at that point .. there will anther surprise. I’m glad they all underestimated that Justin is going to try and play the game. Morgan – I mean even we did. Shelby – fortunately we offered him something he couldn’t refuse. Do you want to go on the block or do you want to stay and also get a care package next week? By the way its being offered by two of the people you’ll have a shot against in the finale. Morgan – and it helps that Danielle is acting like the.. Shelby – brat! Morgan – yeah. She knows this is what got her in trouble in the beginning of the game. Don’t do it. Shelby and Morgan reminisce about the season. 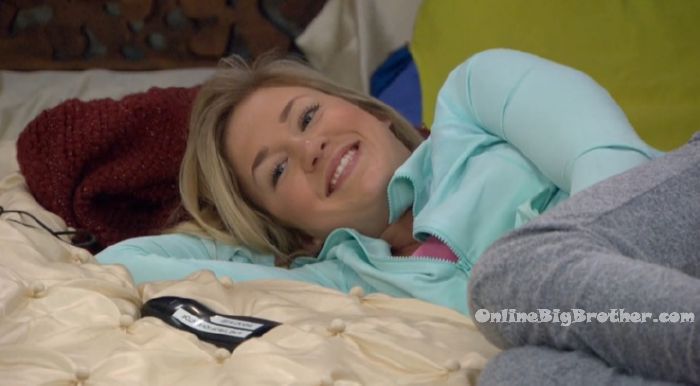 10:30pm – 10:45pm Morgan – its going to suck for whoever goes home next Wednesday. Shelby – and it very well could be me. I’m the sitting duck with a big target on my back. At least I’m the one that can throw a big temper tantrum and demand to be taken to my family. So you better prepare for another temper tantrum from me if I go home big brother. Morgan – all I said I wanted was to win 1 HOH and make it to the finale. Shelby and Morgan go to sleep.

FLASHBACK to any point in the season!
Click here for your: FREE Trial!

10:25pm – 11:40pm Kitchen – Danielle, Justin, Kryssie and Jason are sitting around chatting. Danielle is cooking. They head to the bed room to chat. 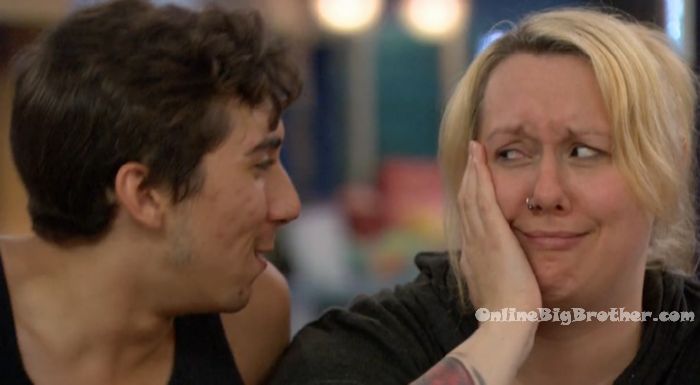 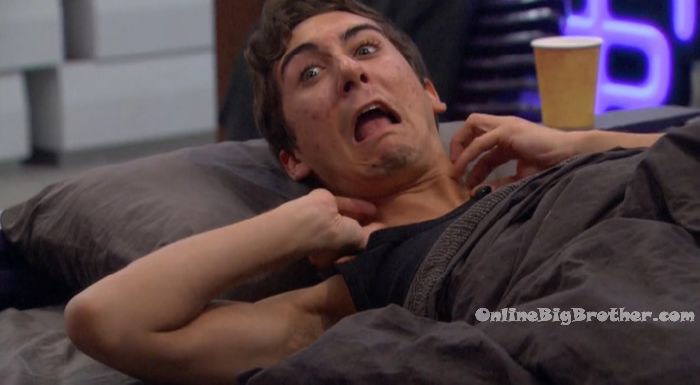 12:24am – 1:30am Jason and Kryssie. Kryssie – it seems like its playing out just like Justin said .. it seems like Danielle is their target. Jason – yeah, but you never know. Justin – stay positive. Jason – I am. I’m positive its more likely that its her but she’s already like I’m going to kill to win. Alright… I’m going to have to kill times two to win then I guess. Justin – you’ve got multiple people dawg. I’m going to be like a monster in that comp. Jason – well I hope so. Justin – I can’t take too much of them. I’ve got to do it. Jason – its about time. Justin leaves the room. Kryssie tells Jason – I know I never win anything but if I win you know I’m taking care of you. They want Danielle. Jason = I’m fine giving them Danielle. I just want to be as safe as possible. Justin returns. He says I just hope this works out. I made it clear if I win I’ll take you down. She’s made it clear she doesn’t like me. Jason tells Kryssie – they don’t even think you’re here doing strategy. Kryssie – let them think that. Jason – exactly and when you get to the end you say this is why I should win the game …..you’re going to have like 10 reasons and those girls are going to be like uuhhhh.. I won a veto once. I can’t imagine Morgan rounding up much of a fan base.

1:30am All the house guests are sleeping.. 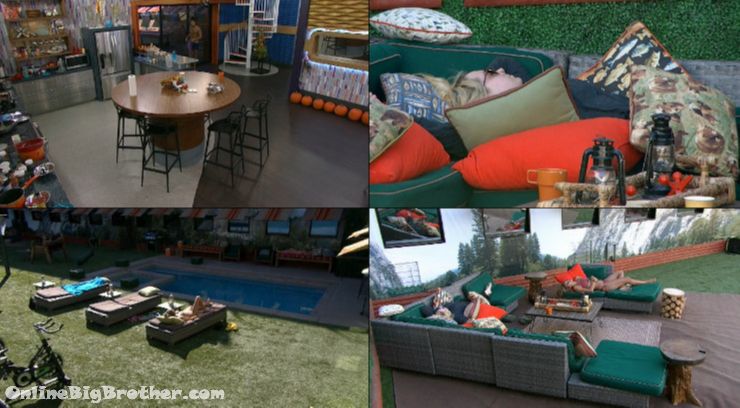 Sunday morning… 1:04pm Nothing much is happening.. 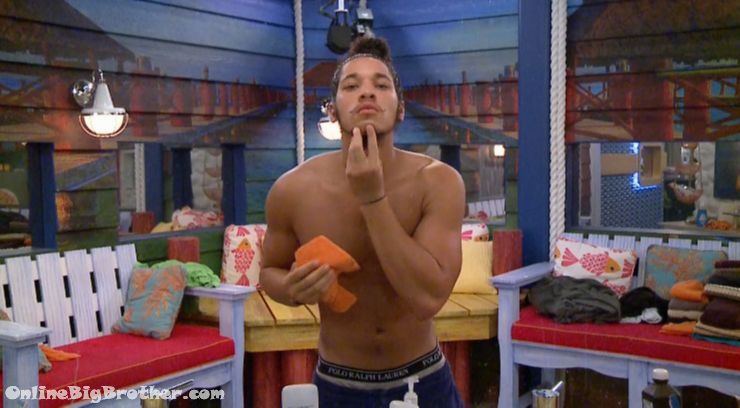 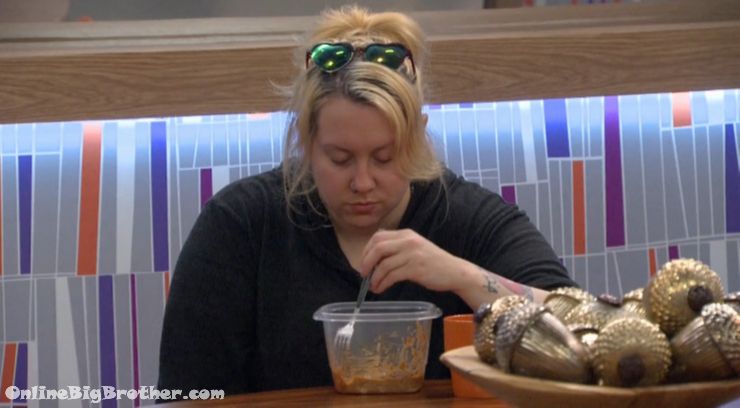 (I haven’t seen much of the feeds today because nothing has been going on. the one time I turn the audio on to listen I hear Kryssie burp.)

I love Shelbey. I don’t hate the others. I just love Shelbey, and have since the day she blew up Corndog’s game. I like players. She and Justin are players.

I’m torn on Shelby because several times on the feeds she has said something that makes me believe she is related to someone connected to the show ( if you don’t believe me look back at some earlier post and they don’t even have all the conversations posted) this should bother both sides and that is a bigger twist than the sister thing even though that would never be confirmed. I use to work for a wealthy client who would give her family BS jobs so she would not have to pay gift taxes and would be able to use it for her own taxes plus the relative with the job would also only get taxed once. That would be a great way to pay off your daughters law school and save on taxes. I always get annoyed about stuff like that on BB. I remember when Austin would talk about all the bb cast he knew and how they partied even before he was on the show hmm. Thumbs up if you think this could be a possibility and it is so wrong of them.

Lmfao! What? That’s a pretty far fetched conspiracy theory based on no evidence. Is this Trump?

Wel, we may get to see which way Justin’s cold heart leads him come Monday. If he actually plays to win the veto to keep from being a replacement Nom and he wins, who does he target to leave?

I think Kryssie should be nervous.

Wow this season isn’t done yet? I havent checked the site in a while but I’m glad to see Danielle still around.
Wish you guys posted Youtube clips this time around.

So Shelby is production’s baby. No wonder they are rigging it for her. She has admitted they give her clues and now she says she’s the only one that can throw a fit and demand to be with her family? Disgusting. No wonder I can’t stand her. Entitled little crybaby

FYI, no jury house because there is not jury. They all know that……. They all get to go home after the exit interview with Julie…. Me thinks the was only joking, and you bought it…..Just like all of the house guests bought her story about being a poor waitress living with her aunt and uncle…

Danielle does not stop picking her nose and flicking her boogers. She’s nauseating to watch. And she does it during her conversations. Barf.
Why doesn’t BB tell her to wash like they do if someone doesn’t wash their hands after using the bathroom.

She’s so gross. She’s not being a great example for her son and the school children she teaches at. I’m wondering if her son’s Dad is watching the show, he could probably fight to get full custody of his son. She’s a bad example of a good mother, partner and teacher. Hope she doesn’t win the veto! Dani AN!

I don’t know what makes you think you have the right to talk about her family situation. Oh my god, she picks her nose, TAKE HER SON AWAY! Bullshit. You don’t know her, not really, so step back.

Danielle also constantly talks about saving her child support to spend on herself for lavish vacations or parties. That child support is for her son’s needs, not her own. Danielle could actually be taken to court to either lose her son or have her child support reduced since she is spending the money on herself and not her child. Is that proof enough that she is a BAD mother. Yes, she loves her son but not as much as she loves herself.

I am loving those grotesque screenshots of Kryssie and Jason. They are hilarious and really capture the hideous vibe of who those two are. I don’t think Shelby is production’s pet. She is probably the only logical and interesting person left there next to Morgan and let’s face it, production knew they had a shit show half way through with the LNJ crew. They know what’s keeping the viewers interested. The blatant shit talking antics of LNC was boring to watch and I do hope the final four consist of Kryssie, Justin, Shelby and Morgan. Jason leaving will be XMAS coming early for me!!

I must not be watching the same show as everyone else ..

I seriously cant believe so many people want to vote for krys as Americas nom when production clearly rigged the game not once but twice in one evening. first the care package was clearly stated as a veto all season long and last minute its changed to diamond veto. (because if it was regular veto morgan/ Shelby would be nomed and the veto would be used to take herself down not to take both of them down). second I watched the feeds like 5 times and Shelby clearly didn’t have problems until AFTER jasons time, which means he WON, but yet she cried to production and they let her redo it. and like she has said many times before on feeds, she will either threaten to sue or cry to production unless she gets her way, so I’m sure they probably gave her hints for the 2nd hoh (which shouldn’t have even happened). now I totally get why people don’t like krys, she is my least favorite person this season and I actually really like Shelby and morgan but its seriously so unfair that production rigged it. so morgan needs to go up just to make it fair.

Ah!!!
Reply to  I must not be watching the same show as everyone else ..

Don’t u know Big brothers motto??
Expect the Unexpected
They can do and change what ever and the want to
They can vote someone out and go to walk out the door and it’s locked as in nope not leaving
So get over it its all big brother nothing is in concrete !!!

Conspiracy, seriously?
Reply to  I must not be watching the same show as everyone else ..

You believe that it is rigged for Shelby? Do you also believe that President Bush planted bombs in the New Orleans neighborhoods during Katrina so he could try and kill thousands? You think he ordered the planes crashing into the WTC? Do you think Obama ordered policemen to shoot black people so he could start the BLM movement? These are all ridiculous conspiracy theories.

What happened to the no sleeping before 10 rule? Everytime I turn on the feeds now they’re sleeping.

maybe it is because there is no After Dark filming going on, which normally started at 9pm EST to midnight, then quick edit to airing. if there is no AD, there is no need to tell people to be awake and interesting for that.

it is my guilty secret that i am happy to see Jason still in the game (haven’t checked in or followed that much because i don’t have feeds), i’d still rather have a fan near the end, even an obnoxious foul mouthed hateful fan.