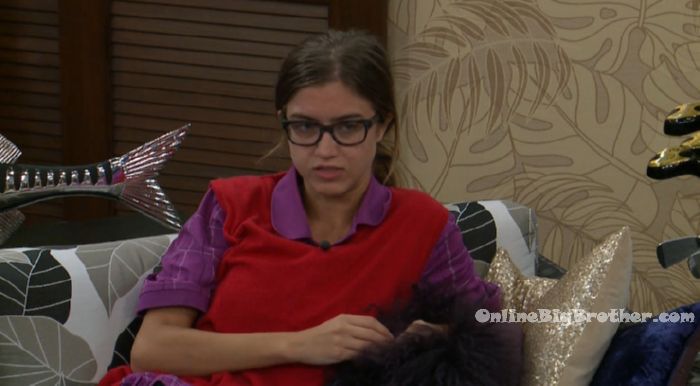 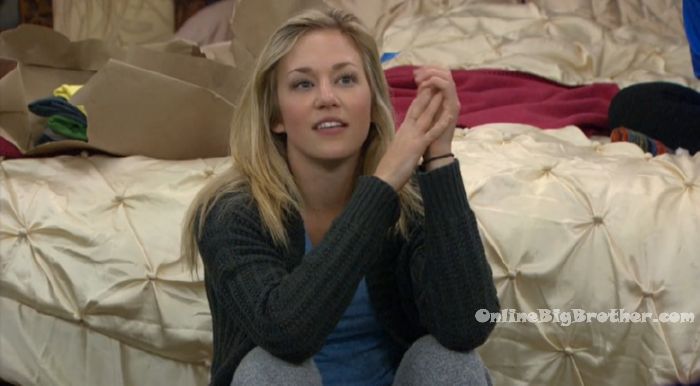 9:35pm – 11:35pm HOH room. Scott, Shelby, Whitney, Alex. and Morgan. Alex – going over line? Morgan – yeah. Shelby 11. Morgan – House guests its going to be a hot one today put on your sunscreen. Shelby – 12. Morgan – Remember house guests the only constant is change. Shelby – 14. Morgan – House guests did you know that more than 1500 batteries have been used this summer to power your wireless microphones? Shelby – 15.2. Morgan – House guests you should know the tallest building west of the Mississippi is 73 floors above the ground. Shelby – 15.1. Morgan – House guests remember to enjoy yourself today, these are the good o’l days. Shelby – 13. Morgan – Just so you know house guests ___ lanterns are nice to have while camping.
Shelby – damn girl! You have those down pat. Alex – if it is that competition you’ve got it. Whitney – I think it might be for HOH. They talk about how Shane knows what’s going on. He was sad in the kitchen. Morgan – Danielle knows too. Whitney – knowing that the HOH also has the care package you would have to be stupid to think he would put up is targets knowing the veto could be used 3 different times. Alex – I think it could be me (America’s nom). Shelby – I expect it to be me. I hope its not. I don’t think you did anything hate-able. I feel like I’m the b***h of the house. So it could be me but I think that could make things entertaining. Morgan – we need anyone pulled (to play in the veto) other than Shane and Danielle. Whitney – if Shane would win the veto use it on Neeley. Alex – he wouldn’t because then Danielle would go up. Shelby – they (Shane & Danielle) would both have get picked to play and both have to win the veto for one of them not to go. Alex – that’s like a 1% chance. Shelby – its just so funny how Kryssie has no idea what is going on. 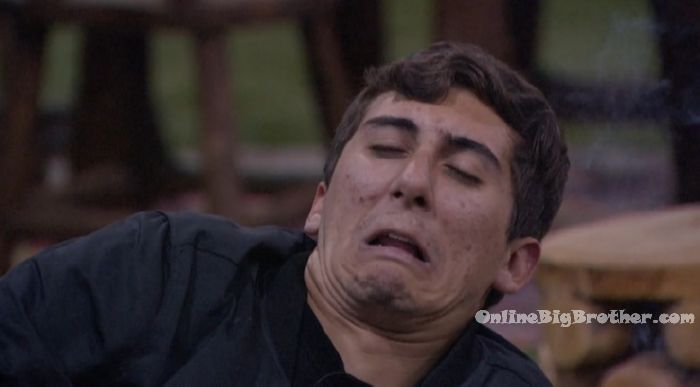 10:35pm – 12:30am Backyard – Shane, Danielle, Kryssie and Jason. Danielle – if we put up Scott and Alex up next week and one of them come down, then we put up Whitney and get her out. Jason – no, put Whitney up as a pawn but you’ve got to vote Scott or Alex out because why wouldn’t we vote for them if they’re still here. Danielle – turn. Danielle – I’m so worried about Shane.. Like crying in the DR scared. Neeley – you can’t be we just need to go out and win it. The conversation turns to talking about Jason’s season and other random conversations about nothing.

Yep, I hope this works out. Lots of variables. If not her, then Shame must go.

I can’t believe that Jason has that many fans. Is he going to skate right through to the end because they are afraid to put him up because they think America will be upset? I for one, want him to go home. I can’t stand listening to him talk and sh*t on everyone else. His attacks get personal at times. Ugg…..I want him gone.

As for Danielle, I hope she goes this week. That would be cool if she gets America’s vote.
Has Scott decided which Veto to use yet? I curious to see which one he picks.

I hate it but I think you are right about Jason. He will be here until the end.

I think Danielle is in trouble this week.

Yes! Finally on the 10th public vote of the season, it finally goes against Jason and his minions – Danielle is 3rd nom

I cannot believe it, an HOH will actually get through a week without losing a number

Cheers to The Ball Smashers and their Virgin King!

Wow, Neely calling Shelby a “meth princess” last nite was low down. Neeley’s true side is emerging and I think it’s ugly.

Everyone in the LNC gets personal. They all say nasty things behind the other side’s back constantly. They plot juvenile high school pranks on the other side. All the while they think they are taking the high road and showing America how one should act to others. Friggin ridiculous!!!

Yet Another Hillary Lie
Reply to  Gozurman

I agree the LNC has played out for me.

LMAO Dani is up. Bye, bye you horrible person!

Yes America came through, love the veto picks as well

Neeley “this is really unfair” really? It’s a game and America is knocking the misfits down a notch. Neeley is another mean girl.

Unfair?? They’ve had everything go thier way since week 1. I’m glad someone is going home from the LNC. They are a bunch of hypocrites. It’s ok when they gloat and say America loves us, it’s ok when they look through other people’s stuff but when the ball smashers do they turn viscous. If Shane goes home this week I hope Danielle goes up
again next week by America.

Dani can go home next week then Kryssie.

Nobody in that house is pretty, at most Office Hot… Look it up!

I like the emotional stability of The Ball Smashers and their Virgin King.

BallSmashers got to take out Shane this week and watch Dani meltdown even more. Dani out next week. :)