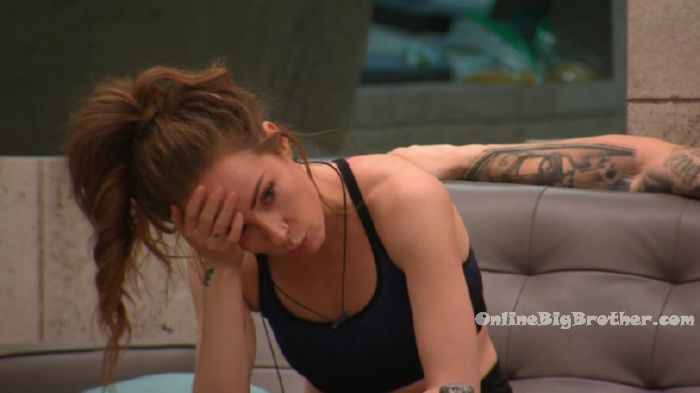 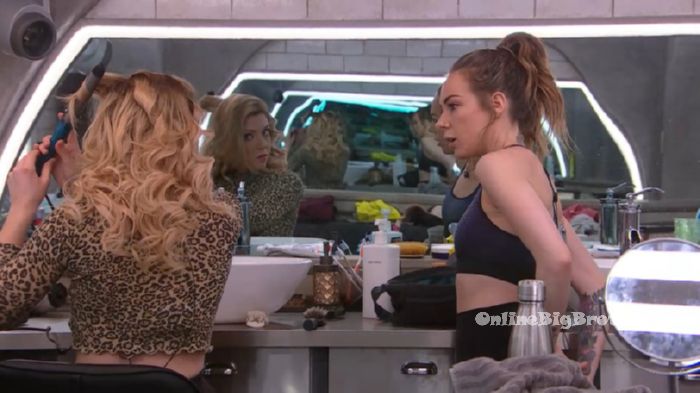 8:20pm Bathroom. Chelsea and Sam.
Sam – just know that I’m not going against the house. Whatever happens, happens. Chelsea – yeah, I’ve said the same thing. Sam – so I am not putting any effort in any more. Chelsea – neither am I. Sam – I’m done with it. Chelsea – its not up to me. Just let it be. Sam – just deal with it after. That’s what we’re here for. Chelsea – exactly. Sam – its too hard to predict. Lets just get through this week. Chelsea – its laughable to me that people think that he is a threat when.. Sam – when nothings happened yet. Chelsea – knowing the game doesn’t necessarily make you a threat .. its being good socially and being a comp threat. Sam – I know that Kyra isn’t going to put me up if she wins HOH. Chelsea – exactly. Sam – having that piece of mind is more than what Maki can offer. Chelsea – right. You have to go with the house but you have to play your own personal game. I don’t feel like there are lines drawn in the sand but if I am guilty by association … I’m not going to let someone cry and feel alone when they’re on the block. Sam – right. Chelsea – if that is going to put me in jeopardy, then okay. I’m not going to ignore a person. The thing that is going against him (Maki) is that he’s saying if he wins HOH he would put up Dane and Cory. Sam – I know, I can’t believe he is throwing out Danes name like that. Chelsea – really f**king stupid. Sam – I know because I am going to tell Dane that you said that. Chelsea – yeah exactly. So why would Dane want to keep him, if its up to Dane. Sam – he’s thrown out Danes name to you and me. WHAT AN IDIOT!! Chelsea – so stupid to say that. They agree to tell Dane tomorrow. Chelsea – I just feel that there is more going on than I can see and its just more beneficial to keep someone who has my back. Sam – same. When he threw out Dane name.. Chelsea – he sealed his own grave. 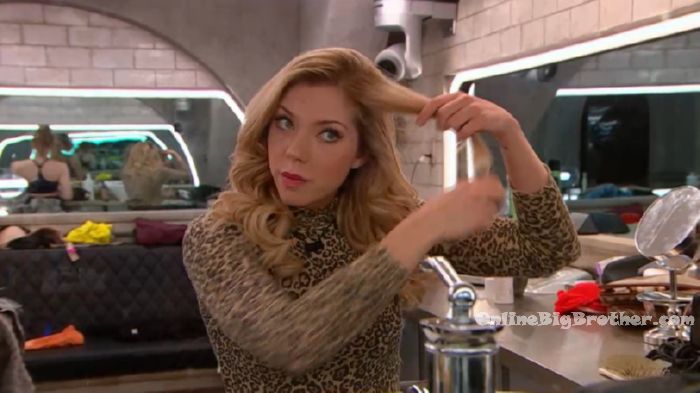 8:30pm Mark and Est. talking in the file room.
Est – do you like french? Mark – not really. Est – I feel like french girls are so stunning. Mark – I like European girls .. like Baltic girls. She is cute but .. ahhhh.. she’s Asian. And like they’re cute but I prefer Eastern European. Have you ever dated an Asian guy? Est – nope. Mark – do you think you could? Est – if he was cool, yeah. Mark – Like are you attracted to Asian guys? Est – I feel like as the race .. Mark – at first not really.. Big Brother blocks the feeds. 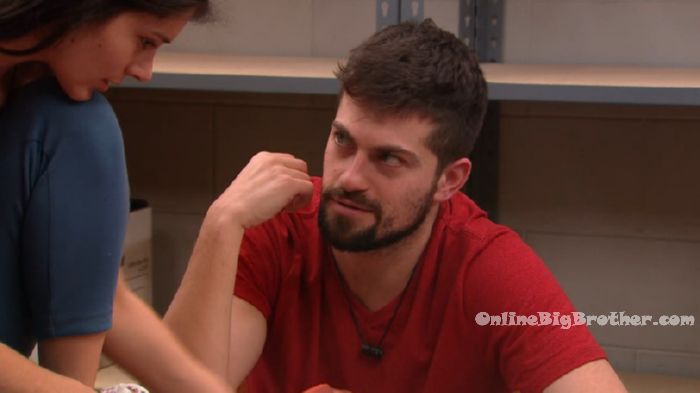 Eddie and Maki. Eddie – I am disappointed that we didn’t talk game. The reason I wanted Laura out the first week was because precisely we didn’t talk game. Maki – okay, so you understand where I came from when I said your name? Eddie – yes. But we still haven’t talked game. Maki – so you’re curious what I would do? Eddie – I know what you would do. (Maki would put up Dane and Cory if he won HOH) Maki – yeah, you heard it. What about you? Eddie – I feel probably the same thing. Its the most logical thing to do. Maki – this HOH is very important because if we win it we can keep the peace. So we should go for it. Eddie – I feel like a lot of people are going to throw it. Eddie – you have to talk to people. Maki – I do and they say yes. Eddie – yes isn’t enough. Maki – so what do I have to do .. get people to suck my d**k? Big Brother blocks the feeds. Eddie – I don’t think you have been campaigning enough. Maki – Chelsea’s said to me that she is going to go with the house. Eddie – we are the house. 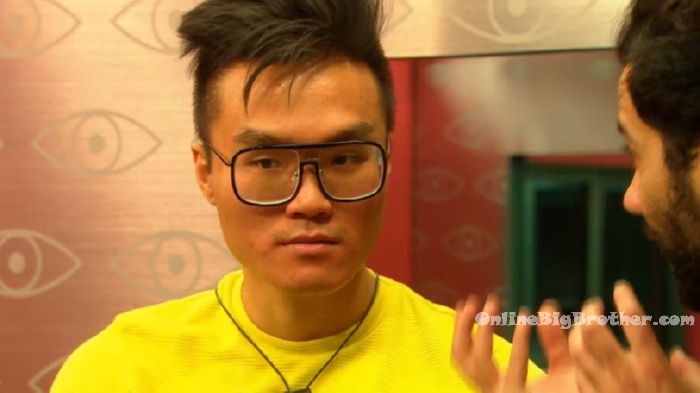 10:13pm Sam and Adam. Sam – I know Dane is going to lose it if I tell him that he (Maki) threw his name out there. And Chelsea. Adam – he already told him this.. Sam – yeah, just that its another conversation. When you hear it over and over again .. solidifies it. I am putting a lot of trust in you because I want you to trust me. I just don’t want to be stupid. Now I have like the biggest crush in the world on you. I told myself I wasn’t going to do certain things in this game just the same way you weren’t going to. Its just like a lot to think about, you know what I mean? Adam – MMMMhhhhmm.

Bedroom. Maki to Mamma K and Eddie – there are only 3 people that I am unsure of. You said it to my face .. I am taking it as face value. Its too early in the game for you guys to be lying to me. I’ve put my heart on the line. The very least you guys can say it to my face. Whether its the vote or not the vote. I want to be approachable. Only you, Adam and Chelsea .. I am unsure of. All three of them said I am going with the house. You guys are going to look silly if you go against this. There’s too many people and you go against the house.. and you’re going to oust yourselves. Everyone said they’re going with the house.. and as long as that doesn’t change .. Maki boy is staying. If you guys have a f**king food reason to send me home.. You guys are all silly to send me home. Al least right now. Eddie – we’re not who you need to tell. Maki – I know I am just solidifying it. 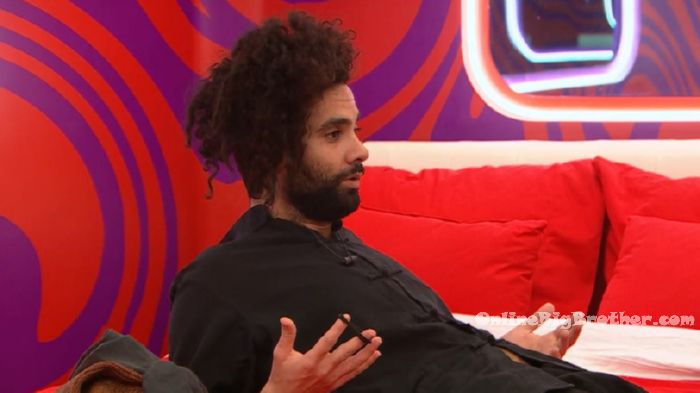 This house is going to be insane in a few weeks if all of their decisions take this much effort. They’re back to keeping Maki; it’s what Dane wants + the majority (Kiki, Este, Mama K, Damien, Eddie). Anthony and Mark have to go along with what Dane wants. Even Adam is somewhat on board now, and he + Chelsea and Sam will go with the majority. Also, Adam is still mad/insecure that he tried out 5 times and Maki was recruited while at a bar. It sounds like Sam met Maki in that recruitment process, perhaps during interviews or something.

Mark is trying SO hard to plant seeds, and it seems to only work with Anthony. Kiki and Este were talking last night in the tub about how Mark gets on their nerves, but he seems to think he has them in his pocket. It appears to me that Mark wants Maki gone because Maki is more liked and often the life of the party, and Mark desperately wants to be the funnyman.

As of now (12:00pm EST) it will likely be a unanimous vote to keep Maki – but this house flip-flops every few hours.

the flip flopping is crazy … probably 3 more total flips until the night is over.

Welp, even Sam just told Kyra that they’re going home. Krya asked what they could do to stay, and Sam said, “Think about how you can leave this house with dignity. Leave the people who tried to help you in a good place.”

What I’m getting out of the current Sam as target of some of the Boys situation:
from Laura interviews you get that Sam was making night one girl’s alliances. Sam ditched the girls when Adam won hoh. Laura told people Sam was making deals.
from conversations in the house this week we learn Damien was the target of the boys, because they wanted the ‘stronger’ of the 2 to go. Adam flipped the target to Laura after Sam became Laura’s target. The house flipped back and forth 3 times, ultimately making Laura the target due to her house meeting on eviction day.
This week the boys have become more concerned that Adam is thinking with l’il Adam, and not with his headbrain.
They have a point given their perspective of the evidence, but given that some of the evidence they’ve manufactured, of course that perspective works. The boys seem to act on the bro before… attitude, and don’t like the idea of having to give her a place of unofficial 5th member just because she makes Adam’s willy tingle.
The reality: Chelsea is Adam’s parachute in case the bottom drops out of the boys alliance, but he does act out of concern for his ten day showmance more than he should. He expects the other boys to trust Sam as much as he does, just because she’s his side piece.
Will the breakup we’ve been watching happen in slow motion for 24 hours hold, or will production push for the showmance angle to continue? Did they notice that the fans haven’t really reacted much in a positive way to the showmance?
The ‘house’ could still flip back on this week’s eviction: when i woke up they were still evicting Kyra, but eviction isn’t until tomorrow.