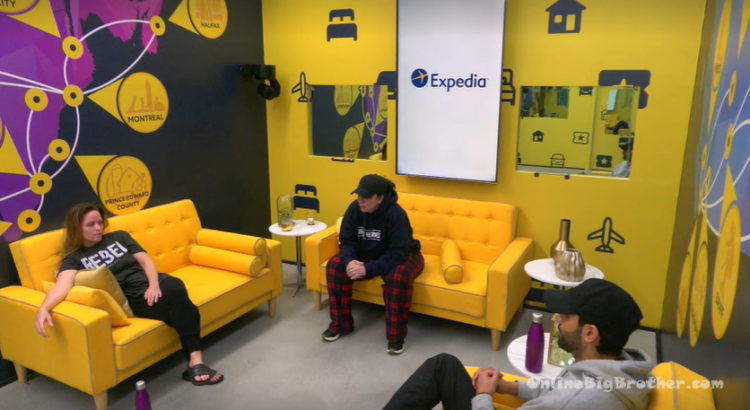 Big Brother spoilers – The plan is to evict Austin on Thursday. 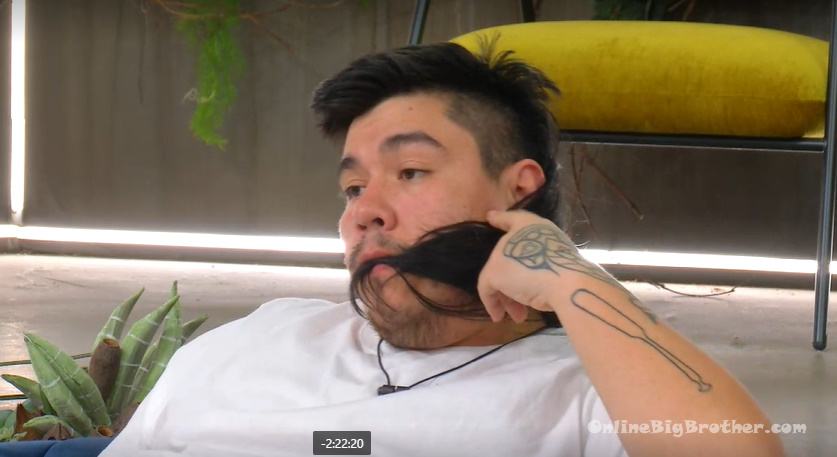 12am Keifer and Tina hanging out.. 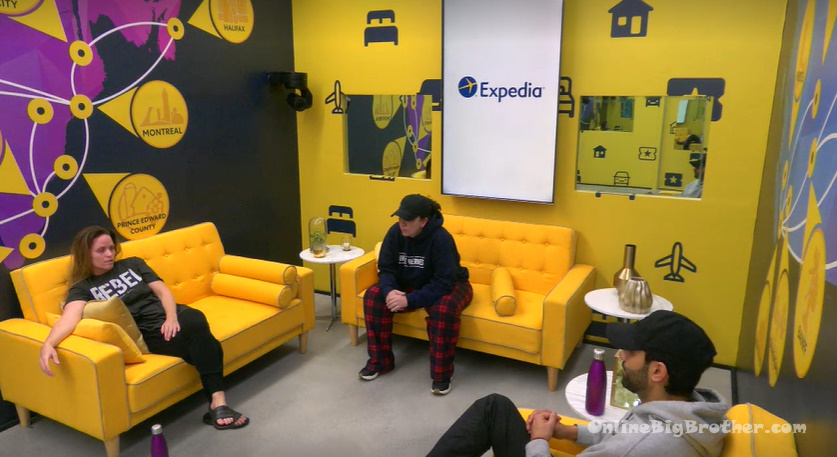 12:30am Tera, Tina and Roh.
Tera – then you’re playing for yourself. That needs to be like operation number one. It will be a little stacked in the jury. Roh – doesn’t matter if neither of them are in the final two you know. Tera – that’s true. Roh – Like if its me and you in the final two .. then they have to choose. Tina and Tera – yeah. Tera – agreed! Tina – I have confidence we can do it. Roh – its an underdog story. I truly believe that is what Canada wants to see. If I were to guess, I would say that Canada is going for our side.. but who knows. Tera – yeah. What do you think about Vic? Roh – like if she is with us? Tera – yeah. Roh – I think she is. Vic is very smart. She knows this game. She has watched every season. Tera – I think they think they have her though. Roh – for sure. And they’re going to try everything they can but at the end of the day they went in and four on one’d her with the Latoya thing. They were talking smack about her .. you know?! Tera and Tina – yeah. Roh – she does a very good job of hiding it and being cool with people. Having a good time even if she might be pissed at someone. Tera – they are fun to be around. Roh – for sure and if we do fun things like with this dinner we just did they are fun to be around. Tera – oh my god but how funny was Breydon’s d**k talk though?! Roh – hilarious! Tina – it was awesome! Tera – yours was really good too! I am so ready for this day to be done though! Tina – it was a long day. They talk about how (production) keeps adding balls to the havenot room. They agree that something has to be in there. Tina – yeah there is a lot more in there now. Tera – there has got to be something in that room. Think of season 7 and how they just kept adding more and more files. Big Brother blocks the feeds.

1am When the feeds return the house guests are in bed. 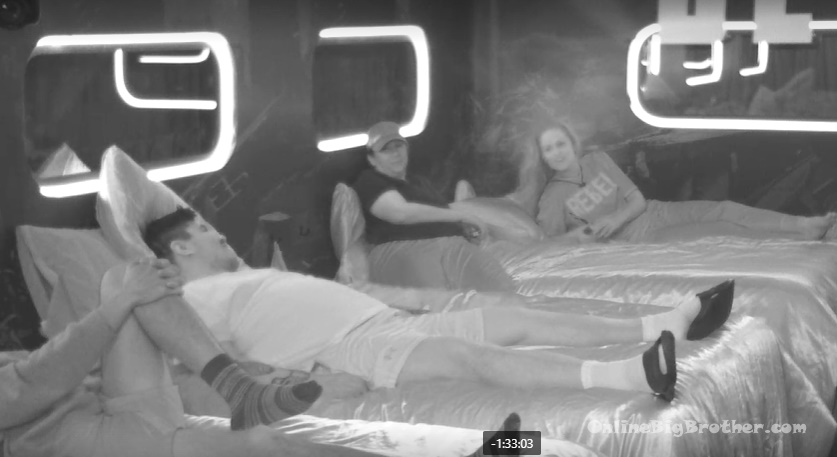 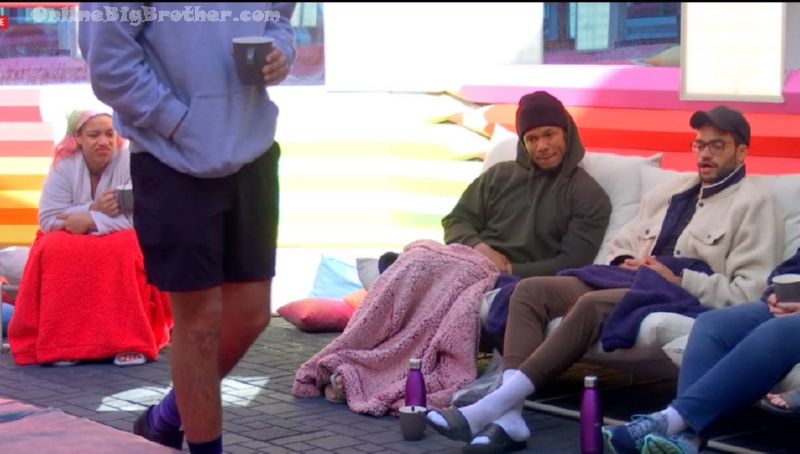 10:12 am houseguests waking up for Tuesday

There is under dogs, and then there is bad game play. Roh, not using the veto to ensure an ally stays is not and underdog story….

TTOTambz
Reply to  Guy From Canada

Nope — but it is part of the production fed plot. How could it be anything else? I mean as soon as the feeds cut & it shifted from him saying “throw it to me, I’ll definitely take you down” to I 110% cannot use this it was clear TPTB were driving what would happen.

as the twist has been pretty unfair on the 2 noms, if they arent doing a skip the slop vote, an interesting twist this week would be a comp(like a bingo game with the balls) between the 2 noms or a public vote for one of the noms to steal one vote, survivor style, where the winner can take away one vote from someone and put it against their opponent on the block

if aus won a steal the vote that could have led to a 4-3 scenario with ro/tina/tera perhaps wanting aus to stay as a target and comp threat to increase their chance of attacking jeds crew, the 4th vote would be stolen from one of the others by aus(in that scenario the winner would choose 2 different people to steal a vote from in order of preference, in case their first choice happened to be the invisible hoh who doesnt vote…so she would choose probably jed & beth to steal if she thinks ty is hoh, meaning first preference jeds vote is stolen…if she chose vic first then ty, tys vote is stolen as vic doesnt vote as virtual hoh)

i think like survivor does so well, big brother could benefit from occasional smaller vote twists like that to make the monday to thursday half of the week more unpredictable and exciting and make the chances of each nom potentially more even, with more players maybe wanting to stick their neck on the line to encourage a flip

for this week in particular, another twist could have been the invisible hoh isnt allowed to say to anyone if they are hoh or not then if either nom can guess who the hoh was on eviction night they both are safe and its a non eviction week but if both guess wrongly, the evicted houseguest leaves…so whoever is asked first they would guess ty, based on their current thoughts, and be wrong, then the second nom would guess vic, and would be right, and arissa would say breydon and austin you are both safe, then with vic outed as hoh things would get crayyyyzeee as ro/brey/aus like to say

OPINION
Why does it feel like a plot line continuity error?

There was no talk we were privy to about a vote trap to humiliate Austin.
Vic Sunday morning: Huge Hissy fit and house griping about any thought of a vote flip being forbidden. This convinces Tina and Tera for sure that Vic is the HOH. All vote flip talk dies. Like: dies because Tina and Tera know Kief and Vic are no go on the flip show.

Vic Sunday afternoon: Tells Austin the vote will be 4-3. There’s no set up for that. There’s no conversation about a set up vote. That always felt off.

Tera Sunday night: we have to warn Ro somehow that Vic will not flip a vote.

Austin and Ro Today: after what Vic says, maybe we should flip the vote.

Tina and Tera: seem… to be buying Ro’s theory that VIc is with them not the other side, but do not warn him.

Did Vic jump the gun on the fraud vote flip plan that didn’t exist yet?
SOME-body’s looking a day too far on the plotting board and not doing set up conversations before jumping to the plot twist.

WHY THE PLOT TWIST: to set up Breydon bonds with Beth. Because he’s hilarious and some of his hilarity might wipe off on Beth whose popularity with viewers is non existent.
Golden Edit girl with a zero rating from fans is something that has to be fixed.

Yeah, this twist has me on the edge of saying nope.
Okay, it’s not the twist.
It’s the feed cuts followed by the oddness.
I’m sideye on everything at this point, and weighing the value of my time.
Will catch up on Wednedsay before the next episode.
Should only be about 7 hours of feed cuts and two house mood swings I’ll miss.

I hope no one goes home this week

so to be sure of no foutte level screwup, brey or ro would need to win hoh

after beth and vic competed against each other for the first few weeks to be the closest female relationship to austin, they are now competing against each other to see who can pull solo breydon…watch the level of fake go way up whenever these 2 are around brey