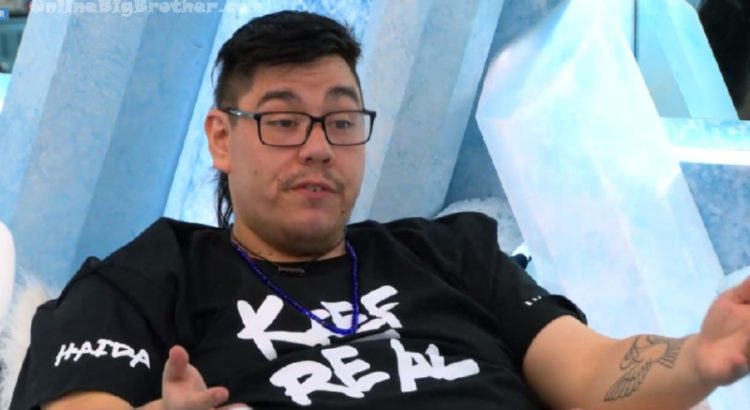 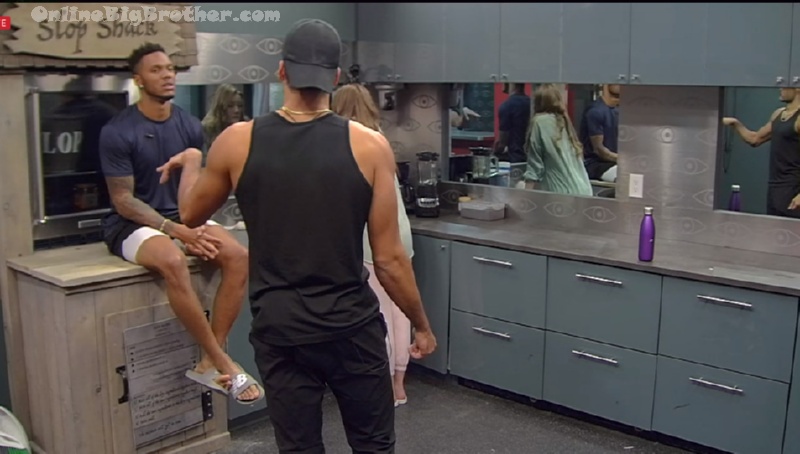 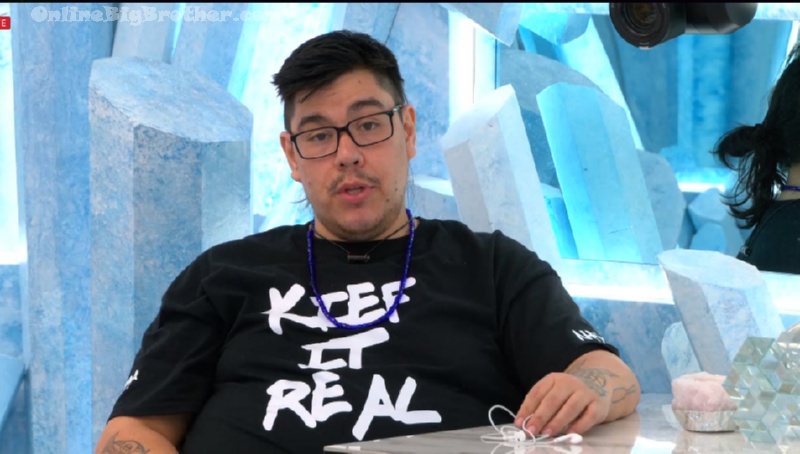 10:52 pm on Kief telling Ro and Kyle there are two people that have put him up for eviction. 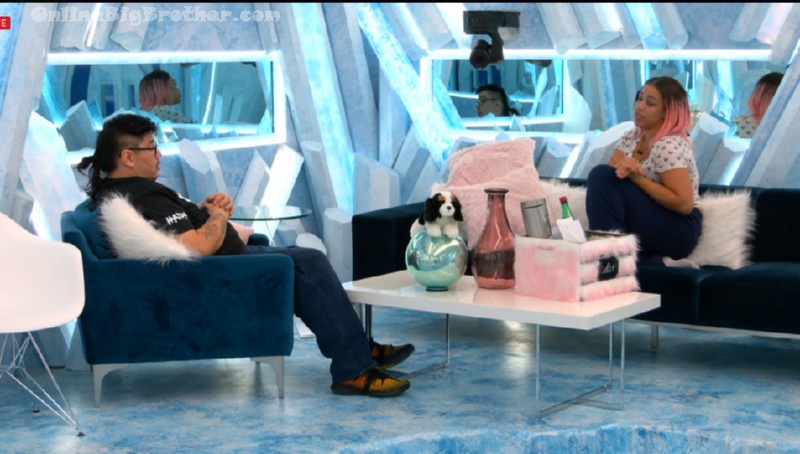 10:55 pm Kief and Vic
Kief – I appreciate the honesty last week.
Kief warns her people are after her.
Kief – I convince them I was going home.. I followed your plan. You are not going to go home on my HOH. For us to work together you can’t look too comfortable.
Kief says he promised LT to put certain people on Slop and she told him Ro, Kyle and Vic.
Kief – I feel bad I just wanted to give that to LT. But you are not going home on my HOH and there are people already pushing..
Vic – we are the two super fans in this house
Kief – everyone is going to be like you know Vic put you up. I f**ed up. I honestly don’t know what to do. I am telling people what they want to hear at the moment.
Kief – if there is a backdoor situation you will not go on the block.
Vic – I will never put you up from this moment onwards.
Kief – you don’t need to promise that
Vic – I feel like an outsider. I would love to work with you. It just means we have each other’s back
Vic – everyone is throwing me under the bus
Vic brings up everyone has a pair in the house but her and Kief. 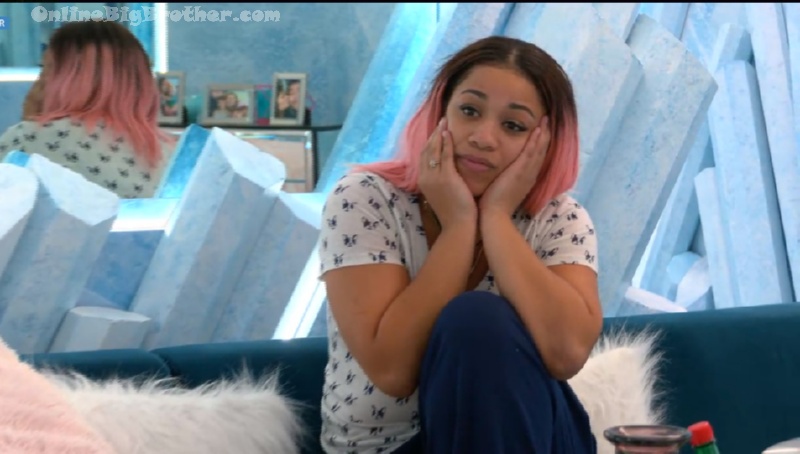 Vic – I got really manipulated during my HOH. I knew what my mom was but the intel.. THEY really made me turn on Beth like people were just lying saying Beth said all this sh1t and I really believed it.
Kief – I talk a little game with Beth.. nobody really was talking game to the guy they thought was going home. I got no Intel last week.

Kief – people are going to try to throw you under the bus and put you up.
Vic – please don’t
Kief – I won’t, if anything comes back to you it’s not the truth I didn’t say it.
Kief – the only other person I had this conversation with is Breydon. I really like Breydoin and I know he stresses hard.

Kief – lay low, people are going to come me hard.
Kief – everyone is a pair or a trio
Vic – I have nothing
Kief – with this I will have to pick a side.. I’m not certain which side to pick. (Sunsetters)

Kief – everyone is going to think I’m putting you up. I’m going to pitch it as a backdoor. I hope nobody wins the POV and if they do I follow through with a backdoor. 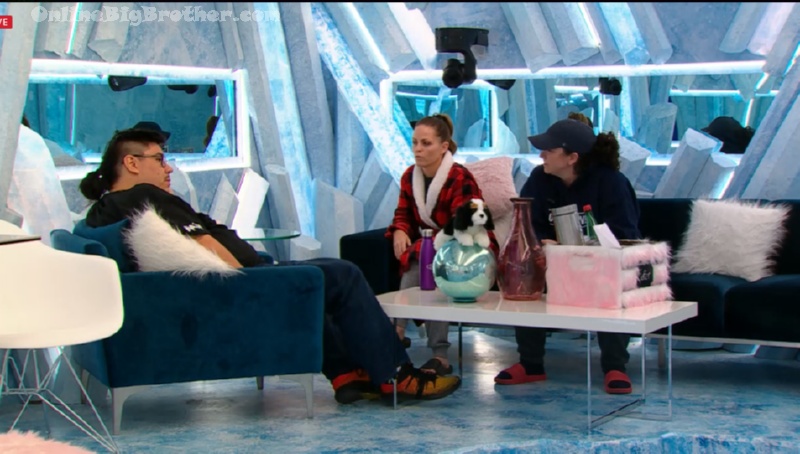 11:23 pm Tina, Tera Kief
Kief – everyone is freaking out
Tera – the lies and the bullshit are starting already
Tera – the house is split in two there are people on both sides I don’t trust.. there are people lying on both side. whatever choice you make I’m good with any of them.
Tina – what’s your gut telling you right now
Kief – Right now I am leaning towards Kyle and Ro, I would put them up as strong competitors for a backdoor that may or may not happen
Tina – who would you backdoor
Kief – hopefully nobody
Kief – I would tell them that is what it would be
Keif – Ro never apologized..

Tera – what do you think of Breydon and Austin
Kefi – scary
Tera – they are really good at flying under the radar
Kief – Austin put me up and if she were to go it would be through the backdoor. 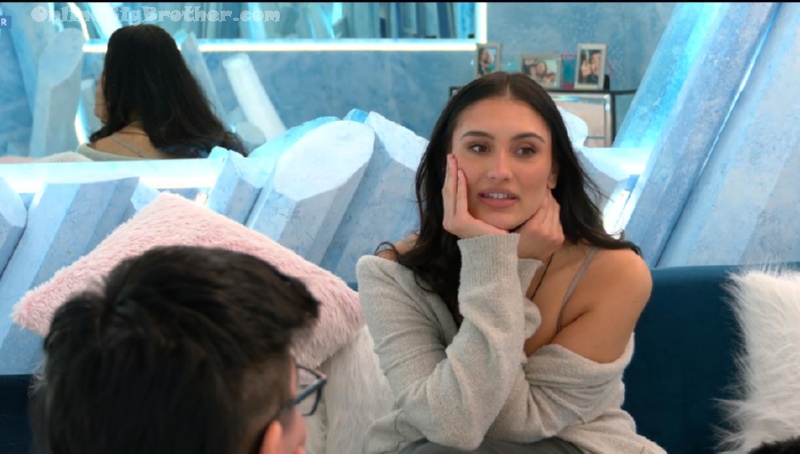 11:50 pm Austin and Kief
Kief saying he’s sticking to their deal and she’s not going up tomorrow.
Austin says she threw the HOH to Kief.
Austin – I was like how do I get zero

Kief is a Queef

this sux, they shouldve voted Kief out then Austin wouldve won HoH and then couldve gotten Latoya out

Gecko Mafia
Reply to  Kief is a Queef

It went perfectly fine! Your woulda, coulda, shoulda is fantasyland!

Vic got really manipulated during her HOH. What a crock of dung. Be smart Kiefer

I can see Ro going this week.

From what I’m piecing together slowly:
while feeds were down.
Sunsetters want KYRO nom, Austin bd.
Ty/Jed/Beth thew Austin utb to Kief.
Austin and/or Brey threw Vic utb according to KYRo to Vic then each to Kief (maybe???)
or all four of au/brey ky/ro came clean to VIc, throwing her under the bus, and they are planning to say their words got twisted around to Vic.
Tera Tina know KyRo nom, and if a renom has to happen Austin.
Kief to Austin: you won’t go on the block tomorrow. he didn’t say not this week.

I think he would prefer Ro gone.
From the sounds of the numbers, if it was Ro and Austin on the block Thursday, Austin would go.

I… Think? Still have a partial mute psychologically when Kief Kiefs.

Really hoping Austin gets POV. I like Ro and Kyle but I like Kyle a little more. I hope Jedson is renom and goes. Kief seems closest with Tina/Tera/Vic and by association Austin/Breydon should have his back! Grats Kief on the win!!

Deja Vu
LaToya has got a promotion from being the numbnutzes LT. to being their Cappy.

Austin was not smart throwing HOH to Kiefer. Let’s just say if she goes home this week, she would deserve it just for throwing that comp.

I know I said immediately, re Pre-90, that Kief would stay with sunsetters more than them, but it is a little annoying that he’s sucking up to them quite this much after they pretty much booted him out the door the moment Vic won HOH. No, really, he’s sucking up to them… while he’s hoh. He even manages to eeyore HOHITIS.
He’s sold out that he’s going to form a 3 with Tina and Tera, but it’s just to manipulate them on behalf of the alliance so that they keep the vote numbers on their side.
He’s told Jed he’d prefer, if he nom’d Rohan and Kyle, not to see either come off the block with Veto (a couple of minutes after saying a bd of austin was possible but not ideal, an hour before he told Tina and Tera he’d prefer Ro goes).

He’s chosen Kyle as his target because he’s the stronger of the two this time. spin the wheel again Kief, you’ve now named 3 people to leave.
house numbers if Kyle and Ro were on the block? Vic promised her vote to Kief. that’s the tie. He also thinks he can manipulate Tina and Tera. All three prefer Kyle. Actually… in the house i’m not sure if i’m aware of a team Rohan houseguest.. other than Kyle.

Will Jed acquiesce to Kief’s statement of intent that he doesn’t want the noms to change, or will he attempt to get the trio together around veto time to go to Kief and say ‘you have to do this to prove to us you’re loyal, because you owe us.’
If you can’t see those words being applied… he already told Ty that Kiefer owed them. Owed them what… I have zero clues. Kiefer is actively saving their asses.

I’m not blind to the season six similarities i’m seeing in some of what is happening in storyline, but I’m hoping I’m very wrong.
BTW… I just dislike the alliance name, hence by other nicknames.