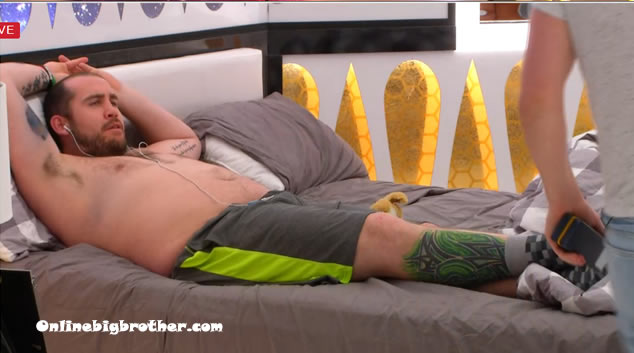 Watch the feeds for free from the US using a VPN. We recommend HMA https://www.hidemyass.com/vpn/r16399/

Power of Veto winner is Demetres 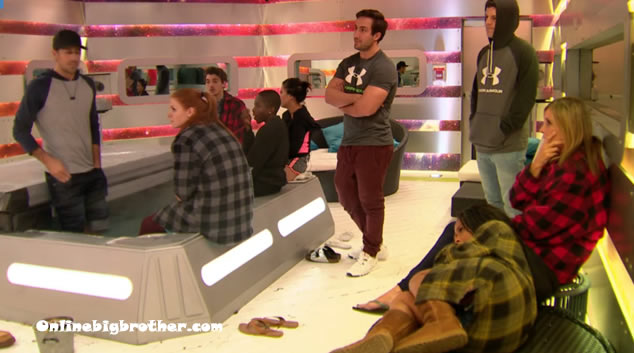 9:13pm Feeds come back they’re all locked in the hot tub area.

Bruno – “Who would have guessed that was the veto” 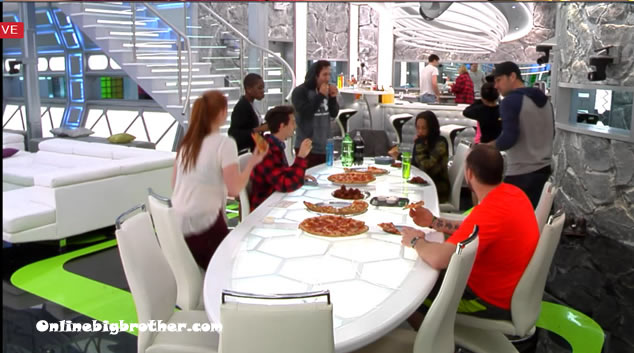 Have nots get a 24 hour break. Everyone a “have” until bed time tomorrow

AHHAHAHA Karen going on about Ika not eating the chicken bones.. (For those that watched Season 3)

10:11pm HOH Kevin and Dillon
Dillon – if I put Sindy up..
Kevin – you want Sindy to go home
Dillon – Yup.. and Bruno told me the same thing

Dillon – I would put Sindy up because she put me up during the double
Kevin says he was working with that group and Sindy went and Backdoored Neda out of the blue.

Dillon says his other option is to put Ika up
Kevin says put the person up that is the bigger threat.
Dillon says Demetres and Ika told him if they won HOH they would go after Jackie.

Dillon – sindy would be the best bet because she put me up during the double.
Kevin promises to vote out whoever he wants him to.

Bruno is pushing for Ika to go up.
Bruno – we have to take the shot Bro

Midnight Bruno pushing for Ika to go up

Dillon and Ika
Ika swears on her babies she won’t put Dillon up.

12:25am HOH Dillon and Ika
(Same old. Dillon can’t trust Bruno but Dillon can trust Ika. The Greek jumps in 1/2 way through and parrots what she says. ) (consider all spoilers in brackets until the next day ;0 )

Demetres “Crack head” Story. Feeds cut before he says her name.
He starts it with ‘this actually happened”
There was this house with these “Huge Huge Old trees” and one of them fell on the power line and these people were out of power “For like 2 days” the owner decided to cut the rest of the trees around the house to prevent it from happening again.

Demetres – “Oh my god I was so hung over..”
Demetres – our town has like characters that exist.. everyone knows theses people
Demetres – theres this one lady in particular she’s older, but. She floats around from town to town and ah… like her name is like
Ika – DON’T.. don’t say anything
Demetres – she has a nickname that everyone knows.. like.. theirs a guy that walks around that sits on the benches .. he’s got a name… there characters right”

Dillon goes on about getting called early in the morning to cut these trees down. He was hug over but said ‘ok whatever” he “Hopped in his car”.
he drove our of his house and turned onto the highway and…. “that lady was on the corner trying to hitch a ride” she looked at him.
Demetres – She’s like OHh OHh OHh I want a ride”
Poor Demetres he was like “Oh my god D***k no”
Demetres – “So she’s like oh my god and runs up to my car and like goes for the door handle” ”

Demetres says he barely beat her and hit lock in the car. “And she’s like banging on my fucking door”
Demetres whispers “She’s a crack head” and he was ‘So hung over” but not to worry he “just hit the gas” and got away.
Demetres – I just merge onto the highway without looking”
Demetres – she’s straight up crazy

I wish. It doesn’t look like it’s gonna happen. I don’t know how Demetres who has won so many compa and can potentially beast it out till the end is not on these guys’ radars. Instead it’s a Jacquie and Cindy battle *facepalm*

Really Bruno! Ika saved your butt last time! Sindy is a better target, Ika really? Bruno go ina corner and cry. I fail to understand Dillion. Kevin and Bruno did not use the veto on you! Did you not forget?!!!!

he made a deal with the 2 of them, but i agree with you.

he shouldn’t put up ika, imo, i guess cindy will be the best option, and then they can just vote jackie out. why doesn’t bruno put that out there, ? because he thinks he, kev and cindy will just pull jackie in with them, he has no intention of pulling dillon in with him. something karen and dre should emphasize, but dre is too intent on breaking up ika and deme, she would probably say ok to ika up and out. when she should remember she should be getting jackie out, or cindy, and working with dillon, ika, deme and maybe william, tho i am not sure about him.

Annoymous Don’t be hypocritical. You know Bruno was going up and he would be going home if the POV was used that week.

Bruno is so full of BS he’s got Dillon’s back? Yeah for this week only! He and Kev are all over the HOH room all desperate and I’ll do whatever ya want Dil. I think it’s hilarious BruKev think they have Karebear in their pocket. Jokes on you pov whiners.

Bruno does have Dillon’s back. IT’s clear Kevin is his number one and if Dillon can’t understand what that means it’s his problem. But Bruno would not actively go after Dillon. The other side has, Demetres, William that have actually gone after Dillon and all of the other side actually wanted Dillon gone last week, with Dre being a vote against him. It is because of Bruno and Neda that Dillon is still in the house. Like you might not like Bruno and might be an Ika fan, but let’s please analyze the game on how it’s happening. The only thing is that Bruno having your back does not mean much cause Bruno won’t win an HOH and protect him.

I have not been able to catch up on many of these but I’m baffled on what seems like IKA fan base. I don’t see her appeal, am I missing something? I feel like the whole sending neda home was a disaster for the Sindy Bruno and Kevin. I don’t like any of the players left but I have a feeling demetres might take it all

I know everyone hates Neda but pushing that aside and seeing how things are turning out. Sindy mad a error in backdooring Neda . it’s 12:15am in the house right now and as I type this Ika is conspiring against Sindy saying she’ll vote her out.

Adding to this.. the game is a lot more open with Neda gone.

Even if you liked her in the game it was good for her to go. her edit was so horrible but at the same time she was a bitch in the house to the point they made it a story line.
You’re right it completely opened up the game – it was so boring before when THE SIX got whatever they wanted.
Also I think the crowds reaction to Neda influenced the decision to put he up imo

People can’t separate what they feel about the HGs from the gameplay of the HGs. Bottom line is Neda had bad social game which meant she had a lot of people after her. She was a shield for Sindy and she never would’ve gone after Sindy. Sindy messed up big time. But good for Ika, she got what she wanted.

I really hope Dillon doesn’t nominate Ika.
Even if he does I think she has the votes to stay! Because Karen demetres William and most likely Sindy will vote to keep her! And potentially dre would keep her!
Either way whoever goes up, I think is safe against Jackie.

OMH I mean Bruno is like stalking Dillon. Poor dude can’t even get in a lil smoke break! When someone starts with I’m not trying to pressure you – they like are! SMH #personalspace

if bruno hadnt been trying so hard to get ika up and out, someone in his own alliance, i don’t think sindy would have put up neda to go, and cindy would not be in danger now. all that would happen is someone would go up as the pawn, and jackie would go out. but bruno is making it obvious he’s going for hard numbers, and that ika isn’t one of them.

to me in other words he is doing his own season all over again, when he was backing hard to get sarah and brit out, when they both wanted to work with him to the end, but instead all he can do is focus on getting out the people who weren’t going to target him. and ika/dem weren’t going to target people in their own 6 until like day 4 of the alliance and neda and bruno made it obvious theyd rather deme and ika on the block then people not in their 6

Ika was not targeting him?! Ika was playing the other side and now she is actively targeting her former alliance, including turning her back on Cindy after destroying Cindy’s game. So Bruno is 100% right to go after Ika. The way he is doing it though makes it seem transparent.

Someone fed Bruno Cassandra pills. He’s picking at Dillon like a woodpecker.
Did someone tell him the power of veto ceremony was tonight… instead of Monday?
If Bruno needed control so bad this week, he could have, I don’t know, stayed in the hoh competition instead of being the first one to agree to throw. He could have become more fluid in his game plan, but instead grimaces about Neda. How long did he want her to be a shield for Bruno’s game? She was getting the credit for being the leader, but who was identified as the social tie to each of the newbies in the supposed Nedalliance? It was Bruno. And now he expects to build multiple alliances, some with people he hasn’t game talked with in 35 days, in 24 hours. It seems as though his mad dash scrambling is supposed to go unnoticed. okay. Why not just have a house meeting, move people into couples, walk to each couple and say ‘we good dude bro. we’re good. I win hoh you can kick up your feet. you’re alliance a, don’t tell alliance b or c.’ and just continue down the line. It would be less obvious.

lol it’s like how Maddy was the HOH in the double eviction at season 4. – flash back.

The problem with Bruno is that his actions don’t match his words. He is doing the exact same thing Neda did and pushing his own agenda. He never once acknowledges that putting up Sindy (as she did nominate Dillon) as being valid. Instead he tries to convince Dillon that even though he did not protect him during POV and did not even have enough sway to keep him from being nominated by Sindy that he should trust him. He has nothing to offer. What Ika does well is she puts some suggestions out there but ultimately she let’s the HOH know that they should trust themselves and she is willing to lose someone that is not going after her. Bruno doesn’t understand that sometimes you have to sacrifice in order to move forward. Maybe If Neda , Bruno and Kevin had allowed Emily to stay Dem and Ika would have felt more like their voices were being heard and stuck it out longer. But Bruno is too selfish to see the mistakes he is making.