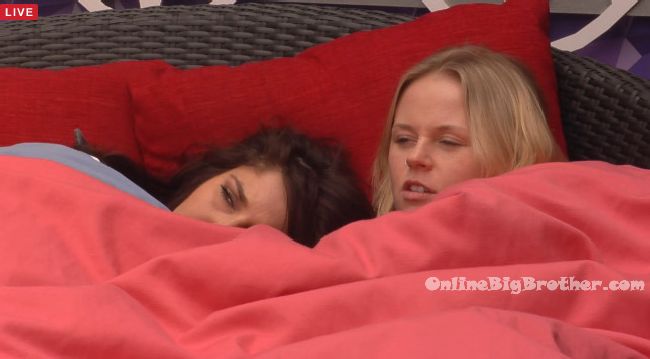 2:50pm Hot Tub – Maddy tells Phil, Nick, Cass, Joel that she has a secret. I’ll ask Cassandra first if she knows. Maddy then whispers to Cassandra if she knows about how the audience yelling not to trust the brothers when Kelsey/Loveita were evicted. Cassandra whispers back and tells Maddy I wouldn’t tell them, it will make them super sketchy and weird. Kelsey might have just made it up too. Maddy then tells the brothers and Joel she isn’t going to say it now.

In the bathroom – Nikki tells Nick you need to learn to fight back (with Phil). Nick tells her that its not even worth his time, 90% of the time I’m tuned out. 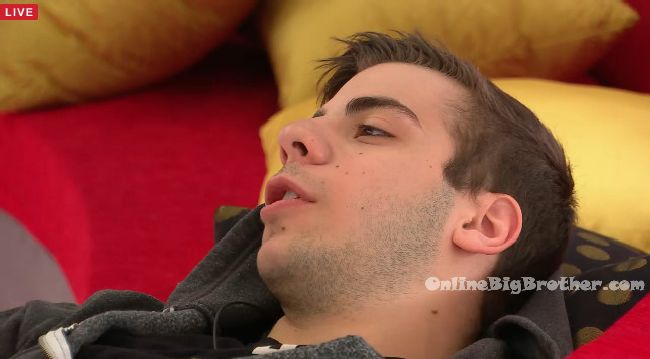 3:45pm In the bedroom – Cassandra tells Phil she didn’t like how Nick was being mean earlier this morning. Phil heads out to find Nick. Phil comes into the high roller room and tells Nick to smarten up. Nick says can you just not talk to me right now. Phil asks why? Nick says I just want some time to myself. Phil says you can’t go wrong with being super nice. Nick says I can’t help it, it will come out every once in a while. Phil says we don’t have many chances in here. If you blow it on one, we’re out of here. You were pissing off Cassandra this morning. Nick says I’m f**king collecting myself right now. Phil says you can collect yourself when I’m done in 2 minutes. Be yourself. Phil says be the nice amazing Nicholas that mom and dad raised, not the one who wants to make people laugh or throw jabs at Loveita a$$. Nick says lately I’ve been frustrated with you and other people. Not you, more other people. Phil says its not time to start pissing off people that have been nice to us. Be nice, cook in the kitchen, clean. Be nice. 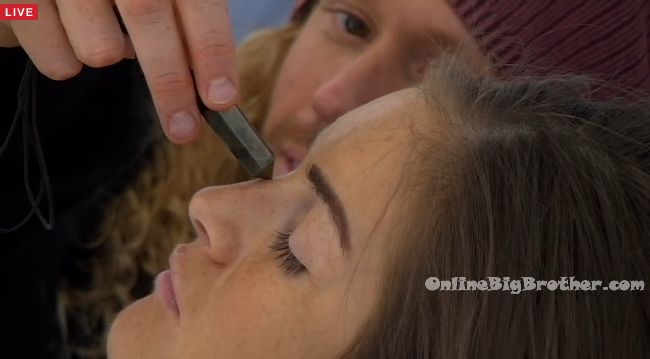 4:20pm – 4:30pm In the high roller room – Nick apologizes to Cassandra for taking his bad moods out on her. He tells her he’s has been suffering from an illness his entire life called cyclothymia (Definition – a mental state characterized by marked swings of mood between depression and elation; bipolar disorder.) Nick says he didn’t want to tell everyone to avoid being looked at as the “crazy person”. He tells her its like a milder form of bipolarism. He says that Phil just came in and gave him sh*t for taking thinks out on her. Nick tells her he is sorry for taking it out on her. Cassandra hugs him and tell him its okay. Nick says he doesn’t want to take it on the people that he likes. I shouldn’t be poking fun at you or being like that. Cassandra tells him that she loves him like a brother. Cassandra tells Nick if he is having bad days he can always come to her. Nick says that Phil doesn’t really get it so its hard to talk to him. Nick says you are the person that I trust in the house and that’s why I wanted to tell you. Which is why I shouldn’t be taking it out on you. 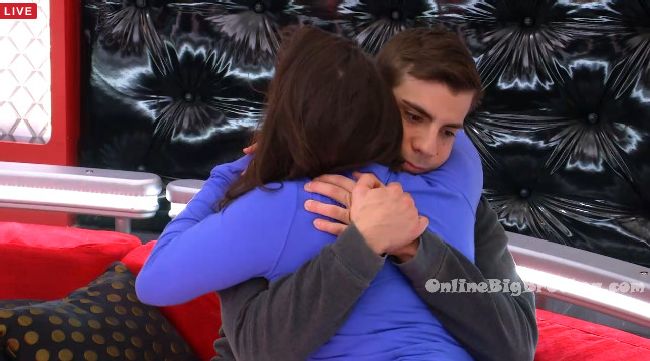 5pm Havenot room – Cassandra asks Kelsey if she’s touched Jared’s bulge. Kelsey says she touched it. She then tells Cassandra that she saw it fully erect. We saw each other the other day in the shower. Cassandra tells her they should just do it. They give us enough condoms.


5:30pm – 5:40pm High roller room – Tim says that Joel is really annoying him. Cassandra says we have to keep him around. Tim says that he wants Jared to play in the final HOH and if he beats us then he deserves to win. Cassandra says I’ve always said I wanted to be at the end with Jared … and you. There’s no way Kelsey would win this game. Tim says oh no. 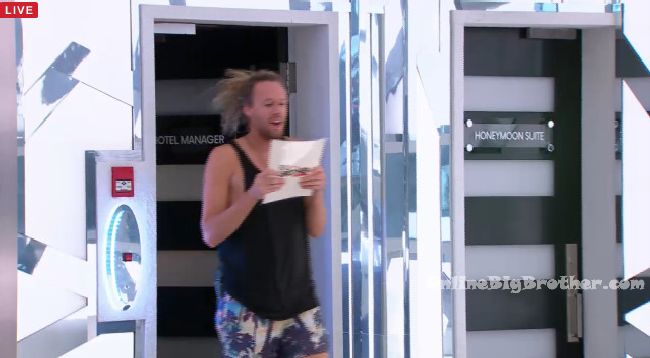 6pm – 6:35pm The cameras focus on the diary room door. Tim comes out and says House Guests please come to the living room!!! Tim has a card that he reads – You have now been living in big brothers house for several weeks and the place is a pigsty. You may have tidied but you have not cleaned the house. This is what the big brother house looked like before you came in. Big Brother then shows the promo video of the house. Tim then reads the rest of the card. Big Brother blocks the feeds and then returns with Tim reading.. Toilets scrubbed and pillows in place and beds made. Big Brother will treat you to a reward for the whole house. You will have exactly 20 minutes to complete this task. They plan out how they’ll clean the house and then get at it. At the end of the 20 minutes they head back to the living room and wait for further instructions. Big Brother then blocks the feeds. 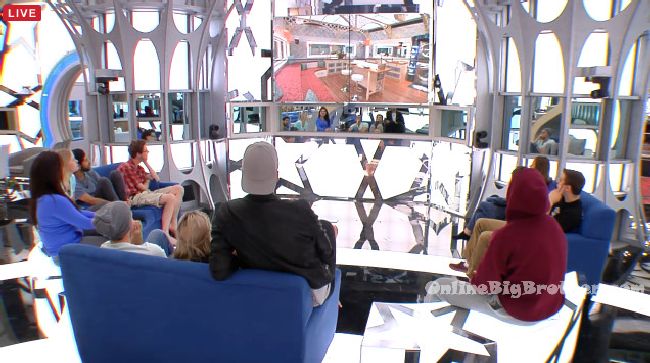 6:50pm – 7pm When the live feeds return – Tim Yells congratulations you’ve won a pizza and cocktail party!! Big Brother blocks the feeds again. When they feeds return the house guests are talking about dressing up for the party. 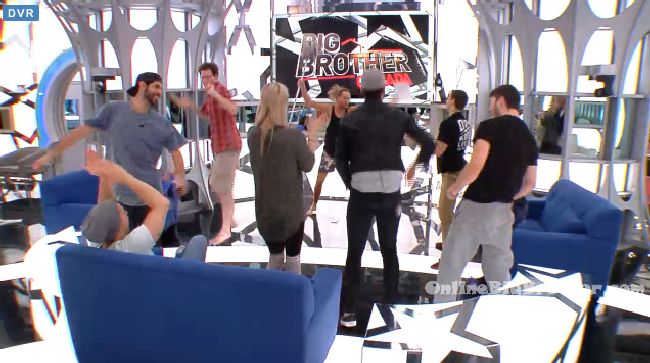 If you’ve found value in the videos and live feed updates this season, please consider showing your support by making a donation. ANY amount is greatly appreciated! Without your support this site and our spoilers would not be possible. Your donations go directly to pay for the considerable costs associated with running & maintaining this website. Thank you!

Anyone tired of cass…she is either eating or drinking something? She doesn’t really have any game besides trying to keep the targets in the house so they don’t go after her. She can’t win a comp and she blindly follows Tim who would slice her throat at anytime

Time for her ass to go.

I can’t stand Cass I wanted her to be evicted even before Jury. BUT in all honesty I feel that she is playing an extremely strong social game. You don’t have to win challenges to win big brother.

Wow!!!! I can’t stand seeing Maddy and Ramsey anymore!!! He looks like Goofy and she looks like the sun from Teletubbies

I wish Canada could vote to send Phil home and keep Nick in the house. Phil is just relentless and Nick is trying to explain to his brother that he’s not okay and not in a good place and Phil just continues to badger him. I hope Phil gets out of the house and sees what Canada really thinks of him.

I hope Nick can get through this and have some fun in the house/Jury. I hope Phil learns to lay off his brother and maybe stop telling him what hes doing wrong all the time and start letting him know what hes doing right. Its hard to stay “nice” in that house. Even fake nice is hard to keep up.

Nikki “I don’t think hes been through anything, hes too young”..<<— WHAT! Why shouldn't people have some self confidence? Just because you don't see what they are SO confident about. I don't remember anyone owing anyone an explanation about why they seem to be confident when others think theres no reason for them to be. How facking rude. Regardless if you like him or not…Wow.

Please Please Please Get Raul OUT Thursday !! Sick of him thinking he’s better than everyone. Agree with Tim don’t like gays when are are SO bitchy about everyone and putting others down. He needs to GO ASAP !!

I agree, I cannot wait for him to be gone. He is so annoying to watch and listen to.

Yes it does seem that all Cass does is eat and sleep talk behind everyone’s back and follows Tim everywhere…. He even cooks for her and it annoys me that every two seconds she looks in the mirror at her back side …. Please as big brother would say “Cassandra stop that”.

When cleaning the house I do not think Cassandra and Joel has ever done this kind of labor before in their life….. Cass was walking around getting in Tim’s way and Joel managed a little sweeping of the floors and nothing else….koodoos to Tim for being the leader and making sure things got down under twenty minutes …sad thing is it will be back to the old way in no time.

This week has been okay, but would be better with mitch. I wonder how far he would have made it without the twist.

I hope a twist will allow a juror to come back.

It was nice to see the house guest put game talk aside and pull together when they cleaned the house….. They actually all got along…. I am sure they are all great individuals outside of the house but when there is a big prize at the end it can truly change a persons way of acting.

Cass goes to where the power is , she is such a kiss ass, just like sabrina, however sabrina is nastier.

I love Nick I swear. That was a sweet conversation between him and Cass. Rooting for him over his brother!

finally a positive comment amongst all these trash hater comments, Thank you

“Tim says that he wants Jared to play in the final HOH and if he beats us then he deserves to win. Cassandra says I’ve always said I wanted to be at the end with Jared … and you.”

BB should just end the season early and hand Jared the cheque already.

I don’t get how people are saying Cass has no game. She is working with so many people and building strong social relationships. She is great socially and that is the most important part of BB really. Plus, people don’t see her as a threat and that will get her farther. It’s not something she should be faulted for :/

A fan did yell “Don’t trust the brothers” during the “commercial break” to Loveita. Loveita responded “Oh, I already know that”. Makes sense that she told Kelsey in the Secret Suite. I was at the Live Eviction that night and I remember that part clearly because I thought the audience member would get scolded but no one seemed to care..