9:46AM Backyard Standard morning chit chat Andrew is joking around about his knees. He says a doctor hasn’t seen them yet all it’s been is a medical technician. Andrew mentions that Tom was giving him some advice on how to treat his wounds. Alec asks him what he’ll do if the competition requires him to kneel down. Andrew says he doesn’t care they don’t really hurt that much but either way he’s going to try. 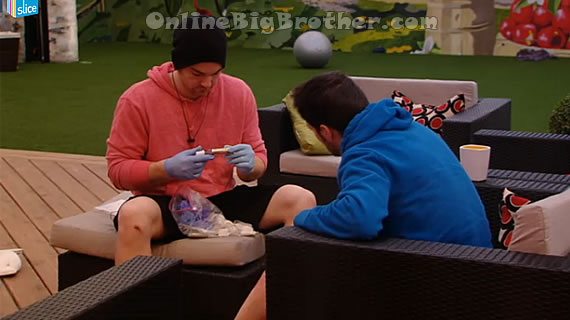 9:50AM Tom and Andrew Tom is helping Andrew out with his wounds. Andrew asks him if he thinks the POV will be used. Tom: “It should be used on my but it isn’t.. now my family has to see it. Andrew: “This is week 4 and the first time that POV isn’t being used.. isn’t it never used on any other seasons” Tom says that Emmett and Alec are using Gary

Tom: “Someone was suppose to be gone last week 10 to nothing vote.. ” Andrew: “Ya and now they are not even on the radar” Tom think he’s got the votes to stay , the only person he suspects will vote against him is Suzette. Tom think he has the majority of the votes, the one he’s not sure about is Talla. 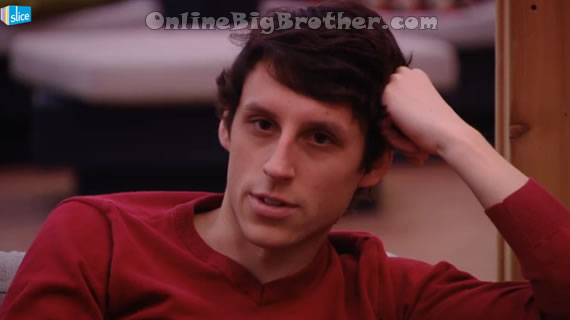 10:01AM Chatting about wrestling movies.. Apparently the most accurate documentary is “Beyond the Mat” AJ and Peter are well versed on their wrestling lore. They talk about a “epic” fight between Mankind vs The Rock.

Lots of random conversations in the backyard.. Alec jokes to Emmett and tells him he better just get use to slop because he could be on it next week. Emmett grumps saying that he wishes they would a least give him a chance to compete in it. Jillian mentions Gary flipping out about 10 minutes ago. Gary is tired because he stays up all night talking about useless things with Suzette and Topaz. The video below shoes him freaking out when Big Brother keeps waking him up 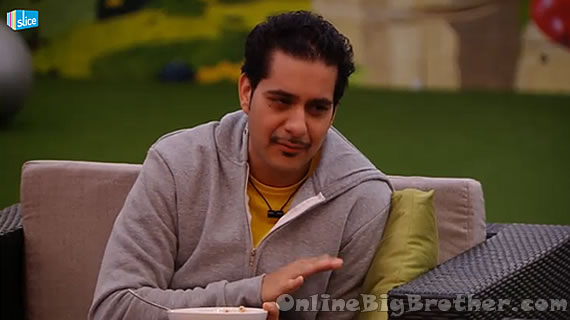 10:21aM AJ and Tom Aj is saying that the target is Liza which shocks him. Aj always thought that Gary would target Tom but not Liza. Talla joins them starts complaining that she cannot find her sports bra. Feeds cut***
When they come back Tom is saying that the same people that told him not to take Gary off the block are now telling Gary to not take him off the block, “C’mon man!” Talk moves to how how you cannot copy write a Phrase.. (Apparently the phrase “C’mon man!” is used in sporting evens) 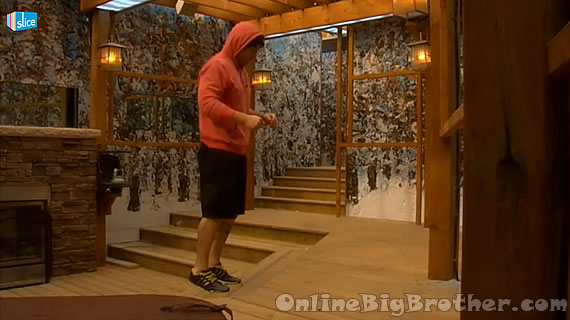 11:00AM Hot tub Room AJ, Andrew and Tom Chatting about Reality TV and how it changed the TV business 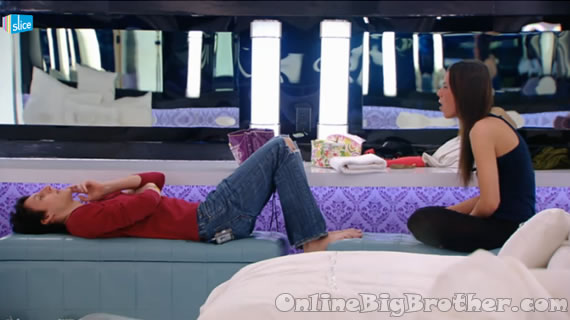 11:22AM Peter and Liza Bedroom

Peter says he’s feeling bored now. Liza says he tried to sleep last night but Tom kept messing around trying to stick his finger in my nose. She adds that Suzette thought they were making out so she left.
Liza: “First off if we are making out.. please listen.. secondly Tom won’t kiss me on Television”
Peter: ‘Yet he’ll prance around naked”
Liza: “His D1ck is out so much”

Liza says she’s sick of “looking pretty” all the time. She thought yesterday was going to be the POV ceremony so she did her makeup/hair. Peter: “So all we have to do it tell you there is a ceremony everyday” Peter jokes that maybe after the show the girls will be in Playboy like that one season of Survivor.. Liza says she has a bunch Playboys at home, Jenny Mccarthy and Pamela Anderson.

Liza points out how scratched up Peter’s arm is.. “What did you do give Alec a hug when he had the POV one.. Mr Glass”
Liza: “If I go I hope you and Tom stick together.. “
Peter: “Preesh”
Liza: “I find us far more interesting than the other people in the house” (of course you do)

Peter instructs her to be goofy fun loving Liza because that is what people like.. He wants her to Dial back her game and be watchful of who is around.

Liza: “This is not me in the real world.. there is so many faces I would have Spit in by now”
Peter says he would have stabbed people in the face by now..

its so funny how Tom is in training mode little does he know he will be walking out the door on thursday.

hahahahhahahahah omg “my first gf i pooped on within the first 3 days”! Andrew, “what?pooped on her??” hhahahahahhaha goodness me lmao.
On the other end peter really is stuck up under liza and jealous of tom like crazy…yet i thought peter was the better player playing liza but nope all wrong upto now liza is still playing peter.

Competitively wise, Tom is the better player to get out of the house simply due to his physical strength in competitions but for social game play, they would be crazy to keep Liza in the house! At least the quadro would be able to control Tom. God only knows what that crazy b$#%ch would do if she got even the slightest power.

and that why I want her to stay
she is the only real threat to the boys
I have no idea why Alec is ok with Tom leaving
Tom is very loyal, very unlikable and VERY stupid which make him the perfect ally
I hope Liza win the next HOH and evict either Emmet or Alec. Now that will be a great TV

Agree Sara. Liza is very unpredictable. I do want someone to shake it up in the house but I don’t want Emmett gone just yet. I hate it when all the strong players are voted out and you are left with boring floaters. If the final four were Gary, Talla, Topaz and AJ I would be so disappointed.

I would rather see one of the quatro take out another quatro member. That would be good tv! Like what Alec is hopefully going to do with Tom. That is one bro to another saying “Nope! Take that buddy”.

This weeks double eviction is going to take them all by suprise. Even Peter who thinks he knows the ins and outs of how things work. Isn’t the motto of BB – Expect the Unexpected? Silly Peter. lol

I don’t Liza but she is playing a hell of a game. She is more dangerous than Tom, because she has the ability to manipulate others. Tom is loyal to a fault, which makes him an excellent ally. Liza, on the other hand, will turn on you in a heartbeat. She is almost like a female version of Dan Gheesling.

Also sending out breast big hugs to Simon and Dawg for the amazing work you both do. When BBCA is over do you go right into the US version? And when do you plan on sleeping?

Thanks Angela, I think we get a couple months off before BB US starts.. Going to miss not being able to post videos during that season.

Ya Simon the videos make the awesome job you guys do even more incredible. I don’t believe I really starting watching the real Big Brother until I started following the live feeds via your site. I tell everyone that will admit they watch BB to check out your site if they really want to know what the house-guests are all about.Kudos to you and Dawg for a job very well done again…does anyone else love hearing the Canadian accent especially Tom!!! I know I do. They sound just like me. LOL

Thanks Scallywag, I appreciate the support.

What happened to Andrew’s knees? I think I must have missed something.