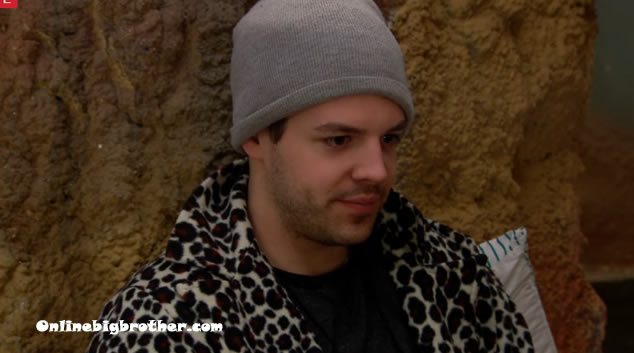 Sindy and Ika red room
Ika says she’s at peace with going up.

11:40am Ika and Dre
Ika says Dillon is going to put her and Demetres on the block for sure.
Ika says Bruno doesn’t have her back.
Ika – that Sindy thing.. If it wasn’t Neda it would have been me.
Ika – they think you hate me which is good.

Ika – you thought I was safe
Dre – ya
Ika – no i’m going on the block with Demetres probably
Ika says Sindy, Kevin and bruno are all working together.

Ika says Jackie is now in with Dillon.
Dre says she’s annoyed by William.
Sounds like Dre threw the competition last night. Dre says she thought Bruno had Ika’s back.
Ika says Dillon is not putting karen and Jackie on the block.
Ika points out how fast Jackie ran to Dillon.
Dre says she has a better pull on Dillon than Bruno.
Ika goes on about how Dre screwed her because she threw that competition.

11:46am Have nots Kevin and Bruno
They talk about how they should have been more forceful to Sindy during the double to prevent her from putting Neda up. Neither of them thought Sindy was going to do it.
Kevin – Losing Neda was disastrous
They agree it was Ika vs neda the battle of the queens.
Bruno saying that Neda exposing the six was good and bad.
They talk about scooping Dre and William up because now they don’t trust Ika/Demetres.
They agree Sindy winning the HOH was not good for her game. She was on nobody’s Radar now she is.
Bruno says Ika has her claws in Sindy, Sindy is intimidated by Ika whatever Ika says Sindy does it.
They say Ika is taking credit for Sindy’s move. “She literally said I got Neda out”
Bruno – Neda was never going after Sindy..
They agree Dillon winning the HOH went as good as it could go for them.
Kevin says Demetres is a idiot to go out first in the HOH.
Kevin – Ika sucks at comps..
Bruno – she’s good at endurance.
Bruno says Dillon will take a shot at Demetres and Ika which is good because he doesn’t trust Demetres for the life of him.
Bruno – if we wants Demetres to go that’s huge.. She’ll have nobody ..
Bruno says only 1 season 2 left and all the season 3’s are left.
Kevin says Sindy won’t go after them.
They are going to focus on how to keep William/Dre going back to Ika.
Kevin – I can see them running back.

Bruno – Dre and William are f***g good
Kevin says William is top in all the comps, “He’s a genius and a physical beast”
Kevin says he underestimated the french connection from the start.

They talk about Jackie flipping to the other side already and how she does it every time.

Kevin – Neda was a shield to have in front of us
Bruno – who was going to fire first
Kevin – they got it
Jackie comes in.

11:54am Dillon and Demetres
Demetres says he knew Jackie was coming after him but isn’t sure about Dillon. Dillon says Demetre and Ika are in his head but so is Sindy.

11:57am Kevin and Bruno
Kevin talks about someone telling Dillon that Kevin had said he’s playing the best social game of his life. Explains how jit came from Karen.

1:48pm Bruno and Kevin Have nots

Sounds like Dillon is putting up Demetres and Jackie with the backdoor plan being Kevin.
[polldaddy poll=9723834]

is bruno just out of the loop, seems to think neda exposed ‘the six’ to dre and william, when i am pretty sure while william was HOH, ika had a conversation (recapped here) with dre telling her all about the six, not to mention how they walked out saw the six out at the pool and figured it out, ika went and told her after that i think.

neda blew her own game up by not sticking with the six and always trying to undermine ika imo, while ika was just basically doing her job of sticking close and seeming to align with the other side, at the same time would take names out of their mouths so they would put up others. the fact kev and bruno had alliance with dillon and emily, at some level, not her fault they didn’t bother to tell her if she’s looking to suggest people up on the block that is not part of the 6. bruno has to know that the intel for kevin to not use the pov came from ika by now, and if not they really need to discuss it

Bruno, your a father …how could you not see Nedas nasty, mean behaviour? Power trips attract others and also followers as the house went through these last 4weeks…. I like Bruno and when he is able to see how it looked, heard and felt watching he will level out I’m sure….

As for Sindy, she still made the best double eviction of all time… the move was and took strength … IKA definitely had a hand in it by speaking her mind and watching the house be controlled by Nedas nasty behavior. I bet IKA calms down alot now…. nothing gets on a straight shooters, top left, persons nerves more than that. Yeah… it screwed with her…. she is in my eyes keeping it pretty real… I like her what can I say…. crazy bitch but a huge heart… I will only say that.
IKA does have heart.

Kevin says he’s bisexual – He does like William / it’s there or he wouldn’t have so brazenly took it so far….

Jackie is insecure so where she feels heard she goes…

Karen, she is a mom at heart probably saying in her head “holy fuck what did I get myself into”.

Dillon has shown strength, care and rolls with the punches hands down.
Dre, she’s out soon easy pawn that ends up making the house balance for a week after Neda’s departure and boos from crowd. MAYBE????

We definitely were heard last night eh Canada…. that was awesome!

PS “Williams cute as heck! Love him” Jason on BBUS was stealth as well thou! Cutie Pies if you ask me….lol

Come on Bruno – tell Dillon the real reason on why the POV was not used. Tell him Ika snitched to Neda and Ika does not have his back and wanted him gone so bad. This is your chance to seal her fate. And take Ika out not Demetres. Demetres has noone . Ika can still align with French Connection and Sindy.

sunny dee
Reply to  Let's do this

really ? tell dillon that ika told neda to tell kevin to not use the pov because she knew will was going to put up bruno to get him out? so basically tell dillon that the pov was not used because ika was protecting bruno first and foremost. doesn’t really show that bruno is very greatful or loyal to someone who had his back.

It could be something revealed to TFC to help put a wedge between them and Demika.

F-ing Mortal!!! Amazing episode! Yesss Ika Wong! Slay! Lmao I was secretly watching with headphones under my dinner table and I screamed! Lmao EPIC! My family thinks I’m a addict and crazy! So annoying staying up till 4am to watch Dill-hole be annoying and win and Dre and William cave in like, that showed weakness. Sucks because I like rooting for big brother fans and dill-hole from all the rooks is the Bb fan but damn was he annoying in that HOH Comp! BB Gods #SaveDemika and Sindy. Jackie is soooo thirsty she needs to go!

you sayn they should have went for ika over neda instead?

no im saying for sindy’s game it wasn’t a good move because it reduces the number of vets, making sindy a bigger target. Also neda would never have gone after sindy. Sindy should have nominated karen as the replacement and they couldve just sent Dillon packing. Now sindy is on people’s radar

why not go after neda after her saefty was up?

It upsets the balance of power against Sindy’s position in the game.

If Dillon is telling the truth than his plan is to backdoor Kevin. Ika or Dem better win that POV.

Great tv watching neda go. However, it was a bad strategic move for Sindy. Neda was not putting her up. Winning the HOH was a bad move for Sindy period. Now, Sindy invisible status is over.

vut the sametime omce neda safty was up wouldnt you wanna target her?

Dillon should put up Kevin and Bruno. If one of them wins POV he can save himself and the person left should go home. Come on, Dillon. When Kevin did not use the POV Dillon said he was gonna go after Kevin and Bruno. I fucking hate Bruno. That bastard better not win this season.

The reigning Canadian Heavyweight Boxing Champ was pitching the group of investors to pony up $50,000 in exchange for 5% of his career earnings.

As Carman explained on the show, the payoffs are quite small, compared to the cost of becoming the champ.

Don’t forget the other mostly failed alliances from week one revealed in weeks 2-4:
Bragade (Karen, Cass, Ika, Neda, Sindy)
Wise Guys (Bruno, Kevin, Mark, Dallas, Dillon)
Beauty and the Beasts (Emily, Bruno, Dillon)
Leftovers (Dre, William, Jackie)
The 8 Vet Alliance
the Black/Saints (Bruno, Neda, Kevin, Emily, Dillon)
Also, wasn’t Cass included in the Gold diggers in week one before Neda got her immunity?
At present none of this season’s alliances appear to be real to the entire alliance…. the remnants of the six are only real to Sindy. Dre no longer trusts demika or William (because she isn’t the number two to Ika or William jealousies) and was attempting to become Dillon’s new number one (only to learn Karen is the new Emily).